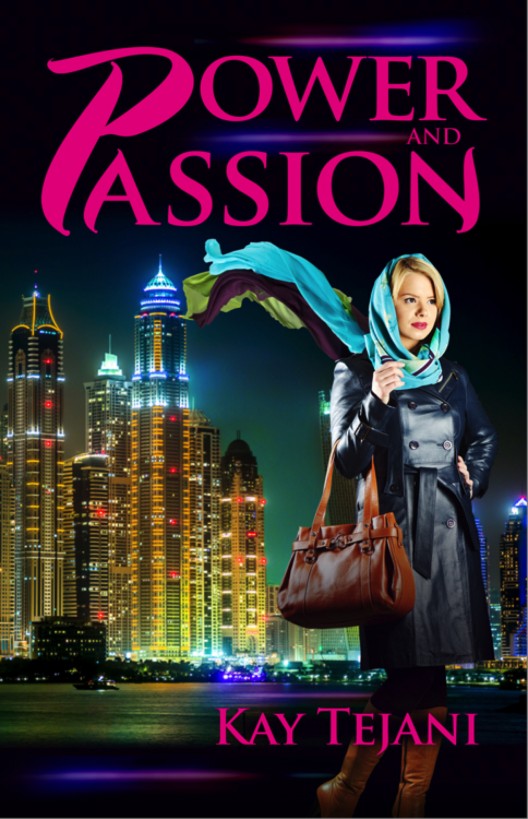 All rights reserved. No part of this book may be
reproduced (except for inclusion in reviews), disseminated or
utilized in any form or by any means, electronic or mechanical,
including photocopying, recording, or in any information storage
and retrieval system, or the Internet/World Wide Web without
written permission from the author or publisher.

Connect with the author at
www.powerandpassion.net.

Dedicated to my daughter and son, who inspire
me to be better and do better.

Standing at the edge of the racetrack, she
brought a hand up to shield her eyes from the hazy, late-afternoon
sun. The temperature had reached the nineties by noon— typical for
early October in Dubai—and now, hours later, had dropped only a few
degrees. Dressed in dark cotton jeggings and a blousy chiffon top,
she wished for a moment that she had put on a skirt that morning
instead.

But then the runners came, and all Sara's
concerns about herself vanished.

"Come on…you're almost there," she called,
clapping her hands as the athletes passed in front of her, making
their way down the red-clay track, their sneakers kicking up the
white chalk of the lane markings. This was the women's eight
hundred meters, the runners dressed in sweatpants and T-shirts with
the Special Olympics Middle East/North Africa logo on the front.
Each of them looked focused, concentrated on reaching the finish
line. Sara leaned over the fence in front of her, craning to see
who crossed it first. She began to cheer again and didn't stop
until the last runner came through several minutes later.

"Your job title shouldn't just be 'events
coordinator,'" said a voice approaching behind her. "It should also
be 'head cheerleader.' Or maybe 'Special Olympics fan number one.'"
Still clapping her hands with a huge smile on her face, Sara turned
to see Isabella, a coworker, coming to stand with her. Sara reached
out her right hand to shake then they exchanged a kiss on each
cheek. Isabella moved up to the fence at the edge of the track, and
the two looked out at the group of runners celebrating their
victories. Even those who did not place in the top three seemed
elated by their achievements. Sara knew each of these girls
personally and couldn't have been prouder of them.

"Both titles sound good to me," she said,
laughing a little as she turned back to Isabella. "How are you? And
your family, are they doing well?"

Sara had been out of the office for a few
days, attending event meetings and visiting meets like this one—the
qualifying trials for the next level of competition in a few
months, all leading up to the actual Olympics six months down the
road. She'd been so busy that it felt like she had not seen her
coworkers in a month.

Isabella nodded. "Yes, but they're still
recovering from jet lag. Thank you. How have your parents
been?"

"They're good, thanks." Sara looked back at
the runners, who had gathered together to huddle around their
coach. A tall, dark-skinned man with a whistle dangling from a
lanyard around his neck, he stood in the middle as they circled
him, their eyes on his face as they listened to his every word. He
grinned at them, moving his hands animatedly as he spoke. Sara was
so pleased to see his enthusiasm.

"Will you be in the office this week?"
Isabella asked.

At that Sara smiled. Her coworker knew her
well. She loved her job, and she knew that paperwork and phone
calls were essential parts of it. But she also felt at home out in
the field, interacting with the athletes and setting up
opportunities that would showcase their talents. She'd been
volunteering her whole life and felt strongly about making positive
differences in the lives of those who did not have the advantages
she did. Now she was just so grateful that the Special Olympics
foundation paid her to do that on a daily basis.

"Yes, I'll be in tomorrow," she replied with
a sigh. "I imagine there's a lot of paperwork to catch up on."

Isabella was about to reply, but the chiming
of Sara's cell phone interrupted their conversation. She pulled it
out of her bag and held it in front of her to check the caller ID.
A picture flashed on the screen—young man, pale skin, dark hair,
and shocking blue eyes, a bit of a roguish smile on his face.

"Pierce," Sara said, holding up the phone to
show the picture of her fiancé to Isabella. "Would you excuse
me?"

"Of course," she said, and the two parted
ways. Sara wandered away from the track a bit to separate herself
from the crowd that had gathered—the parents and families of the
athletes, Special Olympics management like Sara, even some
strangers who had come to see what the event was about. The place
was a microcosm of Dubai with a variety of nationalities
represented, from Arabs to Italians, Chinese to Americans, Indians
to Spanish, British to Russians. It was one of the things Sara
loved most about that place. She had come into contact with people
there whom she might not otherwise have met, and she had learned so
much from every one of them. Seeing all those faces now gave her
hope; the Special Olympics was not a new cause in the United Arab
Emirates, but it was not very well known, and any attention they
could get was a step in the right direction.

Sara swiped the phone's screen to answer the
call before Pierce hung up. He did not like to be kept waiting. He
was a businessman, a real-estate developer to whom time truly did
equate to money. This was one thing Sara just could not understand
about him. She had grown up comfortably middle-class with her
parents back in Canada, and they had been well off since they had
moved to Dubai for her father to pursue a work opportunity.
However, her parents had taught her never to take what she had for
granted and always to give back something of herself and what she
had to the community. This was something Pierce could not
understand. He was a negotiator; he lived for the give and take. If
there was no money to be made from the task, he figured, why waste
time doing it?

"Hello, Pierce," Sara said, putting the
phone up to one ear and covering the other with her hand. "How are
you?"

"Where are you?" he asked, his British
accent sounding clipped and sharp; Pierce was from England and had
lived in Dubai for years. And right now he was ignoring Sara's
question. This was his personality as well—no niceties, no small
talk except when necessary, as was customary for greetings in that
part of the world.

Sara made her way out to the parking lot.
The noise level dropped off, and she uncovered her ear. "I'm at a
track meet," she said, keeping her tone of voice light and playful.
"Remember? We talked about it last night when we went out for
dinner."

There was silence on the other end of the
line, punctuated only by the sound of fingers tapping against a
computer keyboard. Pierce was multitasking as usual—he probably
hadn't even heard a word Sara had said to him. "Are we getting
together this evening or not?" he finally asked.

Sara had reached her car—a silver Porsche
Cayenne— and turned around to lean her back against the door. "Not
today," she replied. "There are still two heats to race, and I'd
like to stay to see them both. The men's four hundred meters, and
then there's a wheelchair—"

"Okay, tomorrow then. Breakfast at the
Atlantis Hotel.

Have fun. Love you."

With that, Pierce hung up. Sara stood there
with the phone in her hand, staring at the picture from his caller
ID. "What on earth is up with you?" she asked it. Pierce had been
so short with her lately, so preoccupied and inattentive. They had
been dating for three years, so she was used to his brusqueness at
times. But it had entered a whole new level these days. For dinner
the night before, they had gone to one of the restaurants next to
the world's largest dancing fountains, near the iconic Burj
Khalifa, the tallest building in the world. As always the food was
good, the global music emanating from the fountains was uplifting,
and the air was filled with peace, joy, and the sounds of pleasant
chatter in many different languages. Sara and Pierce liked to sit
in the patio area and enjoy the great ambience. It was one of their
favorite places—Pierce always said it should be added to the
"must-experience list" along with the Piazzo San Marco in
Venice.

However, he had seemed distracted. He was
mentally miles away, constantly checking and sending out emails on
his phone. When Sara asked him what was wrong, he brushed her
concern aside.

Probably just business
, she thought.
Wasn't that always the case? When they had gotten engaged, Sara's
mother had said Pierce couldn't marry her—he was already married
quite happily to his job. Sara had laughed, but she knew it was not
a joke. Although her parents normally supported all she did, they
had a hard time accepting her engagement because Pierce practiced
no religion. Only his education had made the journey to Dubai with
him, and that, to Sara's parents, was a matter of concern. They
believed in living a balanced life and making time for both the
material and the spiritual.

Another problem for another time. But
something about her mother's "joke" had always stuck with her. What
would her life be like with Pierce once they became husband and
wife? Would she ever see him at home? Both of them worked so much,
which was funny now that she thought of it because their
motivations were so different.

"You want to save the world, Sara," Pierce
had told her once, flashing her that sparkling grin that had made
her fall in love with him in the first place. "I just want to live
well in it."

Some cheering erupted in the stands, a
signal that the next race was about to begin. Sara stood up
straight and smoothed back her wavy, brown hair then fastened it
into a ponytail with a scrunchie she always carried in her bag. She
took another glance at her phone and for a moment considered
calling her fiancé back.

"What has happened to us?" she wanted to ask
him. Or, more to the point, "What has happened to
you
?" Sara
felt bad just thinking the words. A relationship, she believed, was
all about two people working together, so whenever there was a
problem in hers, she looked not only at her partner but at herself
as well. What could she do better? How could she smooth over this
rough patch she felt they were going through? Pierce seemed to
think everything was just fine—or, at least, he never complained.
Whenever Sara tried to broach the subject, he waved it off as if
batting away an annoying fly.