Read Power of the Raven Online

Power of the Raven 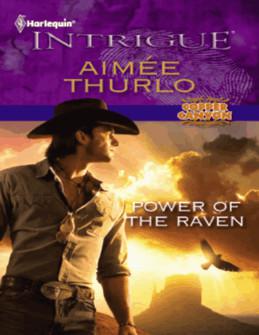 Gene Redhouse believes in signs. But when Lori Baker literally jumps into his life, the Navajo wisdom he’s learned disappears. Lori is being stalked and she’s never been so frightened, or so alone. Although it seems they belong to different worlds, the connection between them is instant and intense. And if he can keep her alive long enough, he vows to explore every inch of her....

With his chiseled features and powerful build, Gene is the safe harbor in Lori’s stormy sea. And yet with her past weighing her down, Lori must decide which is more dangerous: the stranger trailing her every step, or the one daring her to trust him.

“I really appreciate what you’re doing. I know I’ve turned your life, and whatever plans you had for your time in Hartley, upside down.”

She looked at him in surprise. “How? By helping you test your truck’s braking system?”

He laughed, then shook his head. “I’ve had a tough time of it lately. Coping with all the details surrounding a loved one’s death can be overwhelming. You’ve been a welcome, and beautiful, distraction.”

As Lori looked into his dark eyes her heart began beating overtime. For those precious seconds, time stood still. She was aware of the warmth of his body and the spark of desire in his steady gaze.

“You’re a mass of contradictions in one lovely package, Lori Baker,” he whispered.

Power of the Raven

Aimée Thurlo is a nationally known bestselling author. She’s the winner of a Career Achievement Award from
RT Book Reviews,
a New Mexico Book Award in contemporary fiction and a Willa Cather Award in the same category. Her novels have been published in twenty countries worldwide.

Aimée was born in Havana, Cuba, and lives with her husband of thirty-nine years in Corrales, New Mexico. Her husband, David, was raised on the Navajo Indian Reservation.

Don’t miss any of our special offers. Write to us at the following address for information on our newest releases.

Gene Redhouse
—His ranch and his mystical bond with animals ordered his life until a chance encounter with a woman on the run pushed him into a web of danger.

Lori Baker
—Her stalker was relentless. She wanted her old life back, but with danger always just a half step away, there was no way out and no escape from her tormentor.

Duane Hays
—The annoying wrangler had offended nearly every man and woman in the county, and he couldn’t keep a job for more than a week. Word was, he’d do anything for money, and now he was in trouble again.

Daniel Hawk
—He and Gene had stood back-to-back since their teens, and found safety and family with Hosteen Silver, the medicine man who’d taken them in. Now Dan was prepared to break every rule in the book for his foster brother.

Steve Farmer
—The man worked beside Lori at the Motor Vehicle Department, but recently he seemed to have way too many problems with computers and passwords. Was he a con man, or the one being conned?

Bud Harrington
—Bud was a jewelry designer and a sleeze ball, and Lori had not only rejected his advances, she’d reported him to the police. Now the authorities were running shorthanded and the time was ripe for payback.

Paul Grayhorse
—He was a former U.S. Marshal and Gene’s brother in every way that counted. If Gene and his woman needed his help, he’d be there for both of them, regardless of the cost.

To Marilyn, who always has a smile for everyone.

There was nothing like death to make you appreciate life. His foster father,
Hosteen
Silver, hadn’t been gone long, just a little over two months now, but his unexpected passing had reminded Gene Redhouse of just how unpredictable life really was.

Lifting the large bag of sweet feed his horses loved from the back of the truck, he glanced over at Grit. The horse, his foster father’s favorite mount, was prancing around the corral, tossing his head and snorting. He was beautiful, with a graceful arched neck and a strong muscular body. A black-and-white pinto, Grit had a black head with a white blaze down his muzzle. The rest of him, legs included, was white except for the rounded black spots over his body.

“Maybe
Hosteen
Silver mixed up some of the letters he left for the six of us and I got yours by mistake. That’s the only way things make sense, if you stop to think about it. Otherwise, why pick
me
to become friends with Grit?” Paul Grayhorse said, shaking his head. “You can communicate with animals in a way that’s nothing short of amazing. If anyone can befriend that surly creature, it’s you.”

Gene glanced at his foster brother, who stood well back looking at the horse. Paul was tall and muscular, but the former U.S. Marshal was still stiff from the bullet that had sliced through his shoulder a few months back while on assignment protecting a federal judge.

“Be grateful he didn’t ask you to climb up the cliff face to Winter Hawk’s nest, like Daniel and I had to do,” Gene said.

Paul nodded slowly. “Yeah.” After a moment of silence, he continued, “When I first came out to the Rez with him, I thought he’d want us to call him by his first name, like the Anglo fosters did, but he explained that Navajos don’t do that. Names have power and weren’t to be used lightly. He said we should call him
Hosteen
Silver. I had no idea what that meant, and I think that surprised him. That’s when he explained to me that
Hosteen
meant ‘mister,’ and Silver was the nickname others gave him because of his white hair. He also told me I could call him ‘uncle,’ if I preferred, since it also showed proper respect.”

Gene smiled. “It was the same for Dan and me. To his face, we always called him ‘uncle,’ but now that he’s gone, he remains
Hosteen
Silver to us.”

“Hey, now that we’re talking about him,” Paul said, “do you have any more ideas why he left that Changing-Bear-Maiden story for us in his safe-deposit box?”

“Not yet, but he did everything for a reason, like with those letters. I guess it’s just another puzzle we’ll have to figure out over time,” Gene said.

Although Paul had insisted on helping him unload the truck, Gene had taken the heavier sacks of feed and grain himself. “If I were you, I’d put off working with Grit awhile longer,” Gene said. “You’re still favoring your shoulder and there was no deadline on what
Hosteen
Silver asked you to do. Why not put it off until you’re a hundred percent again?”

Paul shook his head. “Time meant little to
Hosteen
Silver, but I want to put this behind me.”

“You’ll have to rethink your tactics, then. You can’t force a horse to do anything—they outweigh you, and they’re stronger. You’ll have to persuade and outthink him. I’d advise you to befriend Grit first with some apples or carrots. Get him to come to you. If you rush it, it’ll be rodeo time and you’ll get thrown. Count on it.”

“Don’t worry, I’ll make it work. I’ll start by lunging him and making sure he’s tired.” As Paul took the halter and lunge line, Grit, who’d been watching him, spun, bucked and started trotting around the corral. Finally, he ran to the far end of the corral, stopped and stared at them, ears pinned back.

“He’s not in a good mood. If you try to corner him now, he might just run over you,” Gene said. “Back off for a while.”

“Who are you kidding? That horse is
never
in a good mood,” Paul said. “I remember when
Hosteen
Silver first brought that foul-tempered beast home. He asked me to exercise him, but every time I tried to ride him, I ended up facedown in the dirt. I was the one who named him Grit because that’s what ended up in my mouth each time I was tossed.”

“No big deal. The ground was there to catch you,” Gene said, trying not to laugh.

Paul leaned against the fence rails and shot his brother a dirty look. “Eventually, you ended up with the job of riding him.
Hosteen
Silver knew that, one way or another, I’d always end up on the ground.”

Lie by Moonlight by Amanda Quick
Saving His Little Miracle (Mills & Boon Medical) by Jennifer Taylor
Chronicles of Gilderam: Book One: Sunset by Kevin Kelleher
A Barcelona Heiress by Sergio Vila-Sanjuán
My Dog Doesn't Like Me by Elizabeth Fensham
Snitch World by Jim Nisbet
Chosen by West, Shay
The Weight of a Wing (The Stolen Wings Book 1) by Ioana Visan
Betrayed in Cornwall by Bolitho, Janie
You Before Anyone Else by Julie Cross and Mark Perini
Our partner