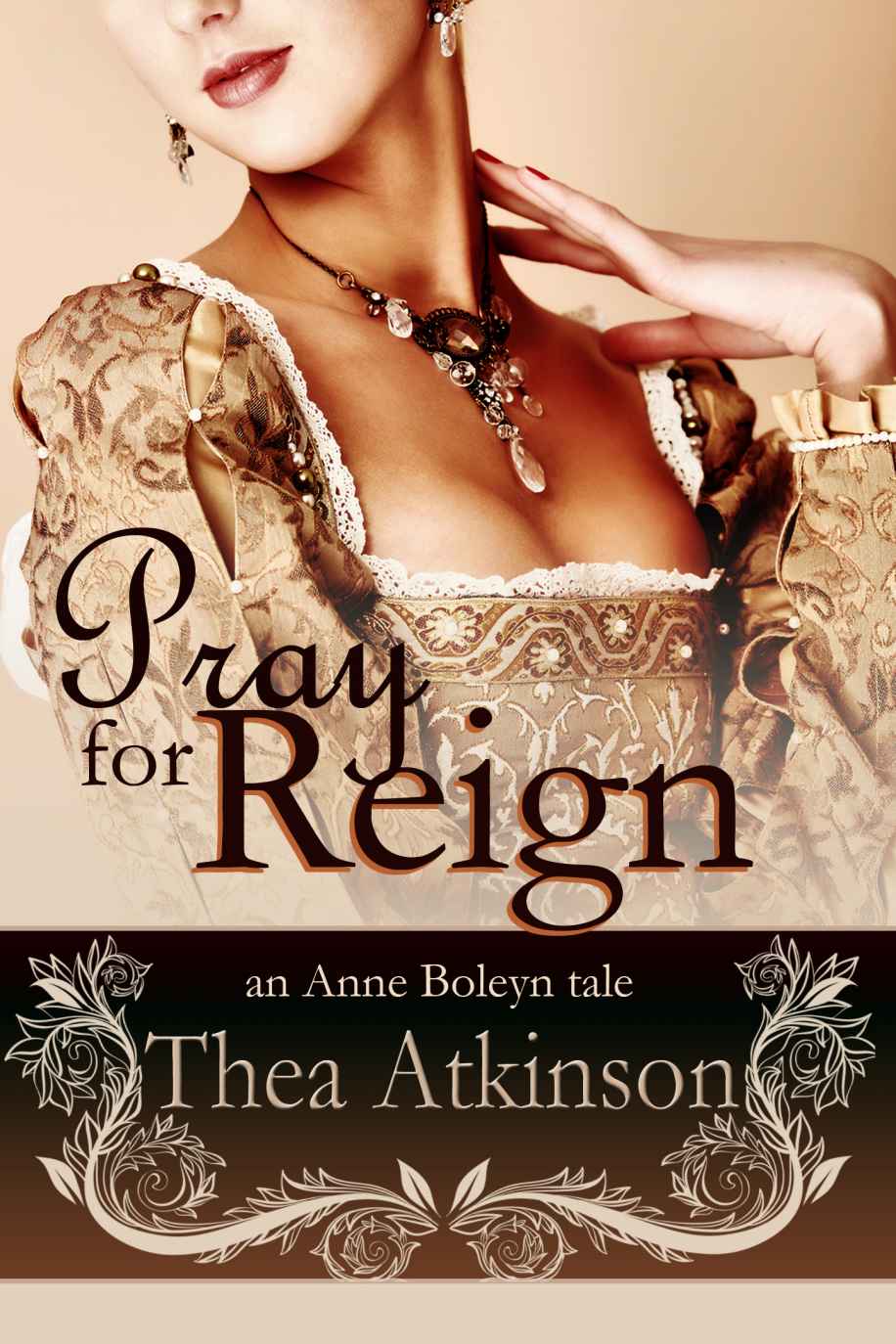 W
hat could a person do while she waited for her death? Play
chess, sing a tune, cry? Anne didn’t know, so over the days she’d been
imprisoned she did them all. In a matter of moments she went from laughing, to
singing, to crying bitter tears. After that, she played a game of chess—acting
as both competitors, so it didn’t matter who won. She just needed to keep her
mind occupied.

At the moment, however, she felt grand. The luxurious gilded
candlesticks that lighted the darkest of nights in the White Tower now caught
the bit of sunlight that managed its way through the heavy drapes to grin
against the floor. The tapestries on their pointing stands rippled with the
occasional draft. Every now and then, wonderful smells of burning fields eked
through the curtains and drove away the smell of damp stone. Burning had always
reminded her of spring planting, and spring meant growth and renewal. Her hope
soared.

From her spot on the bed she addressed the four women who
acted as both servants and spies to her in this place—women she had come to
revile in the last days.

"I’ll not be executed," she told them. "I'll
be saved. Our Grace, the King, will simply offer me placement in a
nunnery."

It could happen; after all, he had offered the same to
Catherine all those years ago, surely he'd do the same now. Should it matter
that Catherine had refused?

Anne combed and combed her hair as she considered it, and
finding a snarl, felt the burn of tears.

Her wardresses froze in their activities, two of them
pulling needles through fine work, the other two playing a game of chess, all
four turned to her with queer expressions.

"Think you, so?" asked Lady Kingston, a sneer on
her lip, her voice cold with hatred. She'd never liked Anne, not that it
bothered her one bit at the moment. It was the scent of smoke and charred grass
that made Anne feel faint, not the cold hatred in the jailer's wife's voice.

"It matters not," she answered. Suddenly she
didn’t want these ladies to believe she was a coward. "If I’m to die, then
die I shall. I’m ready for it."

They mumbled among themselves then, moving from their spots
and gathering around the corner, pretending they didn’t wait on a doomed woman,
talking about bits from the outside. They spoke softly, but still, Anne could
hear them. Hear them and hate them for the things they said.

Anne didn’t care that they thought it so.

"I hear the King believes she's a witch," said
Kingston’s wife. "He told it to a groom who told it to my husband."

Anne bit down on her tongue. So Henry was adding fuel to the
rumors already. She wasn’t surprised. His conscience could never take the truth.
But for now the women stared at her, then grinned evilly when they caught her
eye. Sometimes they scurried out of her way when she came near, and at others
they’d block her stride. Damned women. Bloody fools. Didn’t they know she was
more in tune with her mind than ever before?

Never mind that they whispered about her, or memorized her
words. It didn’t matter that they reported them to Cromwell. She simply
couldn’t go on with life knowing she'd caused George’s death. She couldn’t live
without love or support.

Now, with the knowledge that these women were wary of
her—perhaps afraid—her hopes rose. How heartening it was to know they feared
the omen of waiting on a condemned woman. She wanted to rush them with poised
nails and scream, "Boo!"

"Get me my dinner," she ordered when lord Kingston
showed his face through the window of the door. "I'm hungry as an
out-sported hound.

But when the grand dinner came, she had no appetite. Her
stomach reminded her of the nausea she'd felt at seeing her brother’s limp body,
his last supper left undigested.

"Have you heard news of my death?" she asked
Kingston. Only eight hours had gone by since she'd been sentenced; it seemed
like twenty.

"No." He turned away, embarrassed it seemed.
Strange that a man so used to death could be shy of it now.

"Oh, don't be so gloomy, my Lord Kingston. I will be
freed. God will withhold the rain ’til I’m released—as a sign of my innocence.
Surely our King knows the crops need nourishment." She smiled crazily at
him, hoping perversely that her seeming madness would strike terror in his
heart.

She wanted them all to be afraid.

"Then pray for the rain, my lady, and you may live to
see the harvest," he mumbled, then walked away and out the door, touching
his wife on the sleeve as he went by.

The pockets of sanity gave way to wastelands of terror. She
couldn’t understand why the Archbishop was being denied her. She roamed about
the luxurious prison, touching the damask drapes, staring out the gilded
windows, mumbling his name, weeping when she heard her voice speak it.

Cranmer, once her savior—the man who had finally won the
divorce so long ago—he would be the man to relieve her of her confessions so
she could die in peace—if only Henry would send him to her. Deep inside, she
knew she couldn't maintain a semblance of sanity. And so she refused to try.
Let sense come to her when it would, theatrics were past their use now. And if
sense eluded her, then so be it. Let insanity have its day; it certainly ruled
everywhere else.

And finally, he did come.

"My Lady," he began, folding his hands beneath his
cloak. "I’ve news from the King."

She dared not breathe. Would Henry release her?

"He asks that you provide evidence that Elizabeth is
illegitimate."

She gaped at him. She hadn’t considered this possibility;
that Henry could want to bastardize the daughter he worked so hard to
legitimize. She refused to look at Thomas, knew his black eyes were watering
with shame.

"No. Oh, no." Was that her voice booming
throughout the room? Surely not. She gathered her wits and braced her spine.

"He can’t. I won’t." Despite her efforts to
maintain her dignity, she began to prowl the room, glaring at her wardresses
and forcing them from the room in a flurry. Lady Kingston glared back before
she scuttled into the adjoining chamber.

"It is so like him to want it all. If Elizabeth is a
bastard then we were never wed..."

Thomas gave her a knowing look.

She crossed her arms. "So... that’s what he wants. But
if we were never married then how could I have committed treason by adultery?"
She waited for the answer, knowing none would come. The point was moot, and she
knew it.

"He would do all this for the love of one woman,"
she said aloud, avoiding the thought that he had done much worse for her love.
This time, however, it was to be good humble, modest Jane. Oh, don't fool
yourself, Henry. She was sly—and knew well how to play the game. So, you've
tired of strong-willed, sassy, Anne, have you? Well, I'll just be meek, and
mild tempered. I'll intensify the differences between us, make you believe
you've been bewitched and that God wants you to come back to him. Rubbish!
Revolting, putrid, nauseating rubbish.

Anne thought of how her own differences to Catherine had won
Henry, and how those differences were now reviled. She wished suddenly that she
had been kinder to Catherine and her daughter, for now she could burn for her
hatred, not just the once, but eternally. She shivered.

"Father, think you God can forgive me my sins... all of
them?" she asked quietly. "How I wish I could change my days, those
that I treated unkindly... but I was so stricken with panic and frustration...
Surely, God can forgive me?"

She stared into the Cardinal’s eye, watched him nod quietly.
Still the fear would not settle. Instead, it made her laugh nervously when she'd
been sure she'd meant to cry. Forgiveness? What had she done to earn it?

His expression didn’t change as he watched her laugh then
weep. She had heard through the snippets of her ladies’ conversation, that
Cranmer may well have been ensnared too. Like Wyatt. Like George. Like a dozen
others. All because he had petitioned Henry for her, but in his own way he
managed to defend her without crossing that infamously intangible line of
Henry's. And he had kept his life in spite of it, and because of it.

"Lord Percy and I were lovers, tell him," she told
him, knowing the proof would probably endanger her first love now, but
realizing Elizabeth's welfare as the more important. "And Mary. Don't
forget to mention Henry's own affair with Mary. He had an affair with her
before we were married. Both relationships would put us in an illegal affinity
for marriage, and either will do for His Grace’s proof."

She hugged her belly. It ached so, from all the worry.
"That should be enough for him. And hopefully for me."

It should, but there was no guarantee. She hoped the
evidence she gave would give Henry reason to be kind to her in the end. She
tried to imagine how she would endure the fire at her skin.

“It will be, my Lady," Thomas said quietly. So much
about him was quiet, for as long as she had known him. Kind voice, as kind to
ears as satin to touch. Even his hands were smooth and quiet, not loud hands,
as Anne's own were. They never flailed at the air when he spoke, just lay still
in his lap, only occasionally leaving to make a light sweeping motion through
the air when he felt impassioned. His entire body was quiet. The thought of
never seeing this man again, nor anyone again—was too much.

"Jane is a kind woman," he said. "She'll make
sure Henry is kind to Elizabeth."

Anne noticed kindness to herself had been carefully omitted.
Kind, was Cranmer. And careful. In his careful way, he left.

It wasn't ’til later in the day that Kingston came to her
with news of her death, the results of her meeting with the Archbishop.

"The swordsman of Calais has been sent for," he
said simply, his pockmarked face blank. "I'm not sure if he has already
arrived or not."

Though his words were said without emotion, Anne found hope
in them—at least she would be decapitated and not burned. It was small solace,
but it was still solace.

"He's the best there is with a sword," she said.
"Yes. With a sword the affair will be swift."

"I hear he's very good," she said, circling her
neck with her hands. "Which is perfect, since my neck is so tiny."
She had wanted to ease the tension, to make a joke, but instead of laughing,
the jailer chewed on his lip and fled from the room.

Anne grinned; she couldn’t help herself. It was such a
relief to think she could go quickly; no fire, no horrible hacking like had
been done to an old woman just months before. None other had been granted the
sword. Not ever. It was a good sign, indeed.

With the grin came an urge to laugh, though she couldn’t
understand it. Such sweet laughter it was, too. Innocent sounding, light like a
child’s. Oh, how beautiful it sounded. She wanted to hear more of it, and she
suddenly couldn’t stop to save her soul.