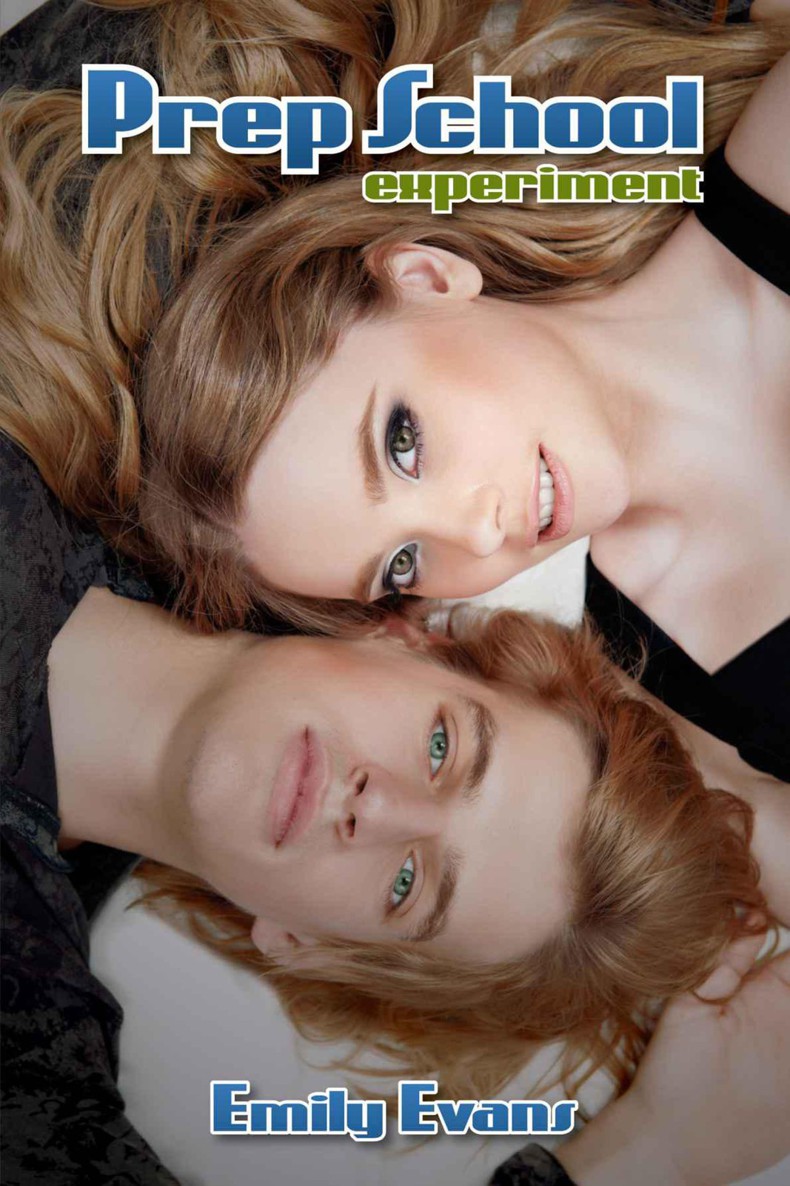 Excerpts from
The Boarding School Experiment
Copyright 2012 by Emily Evans

This eBook is licensed for your personal enjoyment only. This eBook may not be resold or given away to other people. If you would like to share this book with another person, please purchase an additional copy for each of them. If you are reading this book and did not purchase it, or it was not purchased for your use only, then you should purchase your own copy. Thank you for respecting the author's work.

For information about permission to reproduce selections from this book, write to Emily Evans at
[email protected]
.

For upcoming books and other information, visit

Thanks to Editor Tracy Seybold.

Thanks to Proofreaders: G. L. Editing and Copywriting (
[email protected]
)

Thanks to Jennifer & Gail at MJG Literary. I value the support.

Thanks to Joellen for the wisdom.

Thanks to Michelle, Barbie, Stacy, Teresa, and Veronica for listening.

Thanks to Wayne for the push.

Other Available Books By Emily Evans

Rhys appears in two of the Emily Evans novels:

The
Boarding School Experiment
: where he meets Kaitlyn.

Whenever
: the first chapter.

Readers of those novels will note that the author intentionally left out major events from
Whenever’s
decathlon scene and shortened scenes from
The Boarding School Experiment
for clarity. The author hopes her fans will forgive the artistic license.

Don’t kill me. I was in a fight with Thane, so I switched his Boarding School Entrance Exam with yours. I knew rich kids like him would get picked, not kids from the Trallwyn trailer park like us.

I didn’t confess right away because…well, it’s more complicated than I can go into in a letter. I couldn’t find you before I left, but I remembered you once said you hated to move. Maybe you don’t want to go? I don’t know what to do. By the time you read this, I’ll be in Alaska. Please contact me there. I’ll fix this.

Her tears seemed real, but there was no way Rhys would try with Stepdad #4. Staying away from that waste of space was as much
try
as he was going to do.

Mom cranked down her window, letting in hot air. The wind resistance probably burned more gas than if she’d just let the air conditioner run. But, he didn’t say so. She wouldn’t welcome the tip. She held the wheel steady with her knee and clipped her hair up off her neck. “You know, I’ve been thinking we should move somewhere less humid. Maybe Dallas?”

Move? Again? Her marriage must be diving to the bottom of the dumpster. The difference was, this time she couldn’t drop Rhys off at his grandparents’ house and just go. His grandparents had passed away, and he still had senior year to finish. He had to finish. Stepdad #2 had taught him:
Complete high school no matter what or you’ll end up at a dead-end job.
Rhys dreamed of more than finishing high school. He wanted it all. College. His own home. His own business.

They passed the Fry Hut and turned onto Quinn Street. Trallwyn, Texas wasn’t so bad and the school district was excellent. Couldn’t Mom hang around here for another nine months? Nine months and he’d get a scholarship and go off to college. Then, he’d pick a town and never move again. Rhys blew out a breath and tried not to show his reaction. Stating a contrary opinion would only set her off.

“Are you listening, Rhys?”

Mom tightened her grip and turned onto the drive in front of Trallwyn High School. The brakes squealed as she pulled to a stop. He needed to change the brake pads. That would have to wait until payday. His savings account was for college, and he wouldn’t touch it.

Mom frowned and narrowed her bloodshot eyes. “Look at those kids. The line wraps around the whole school. What is this again?”

“And
that
drew a crowd?”

“Yep.” Today’s event was bigger than normal because it was partially a publicity stunt: a disaster-preparedness fundraiser. Any kid born seventeen years ago during the hurricane that destroyed much of Trallwyn was invited to participate. That meant him. Rhys figured it would look good on his college applications. He didn’t explain the details to Mom though. Anything that made her remember the week he was born made her pop a top early.

Afternoon benders were the worst. He could hear her in his head: “
She only liked guys with deep, dark, brown eyes. But Rhys had green eyes. She couldn’t fathom it.”
He’d never bothered explaining genetics to her. Brown-eyed couples could have green-eyed kids. His grandparents said he must be a throwback to a long-ago Polish ancestor and that he should never-mind Mom’s confusion.

The car stopped and he opened the door, shaking off thoughts of his grandparents. They’d hate today. “
Just ’cause you know all the answers doesn’t mean you have to be Johnny-on-the-Spot. Go along to get along.”
Participating on an academic decathlon team would be
“getting ahead of himself.”
They’d say he should set his sights on fitting in. Something his mom never did. He hated being compared to Mom.

Mom shook her head. “School on a Saturday. So whack. What time do you get out?”

“I’ve got a shift at the library after.” He’d spent a lot of time at the Trallwyn Library these last few years because he loved books and loved being away from home even more. The librarian had put him to work once she could legally hire him. “Mrs. Wentworth will give me a ride there.” Rhys shrugged his shoulder toward the school. “Her son’s in this thing too.”

Mom looked blank a moment, and Rhys figured she’d forgotten who Mrs. Wentworth was. Mrs. Wentworth, a local senator’s wife, volunteered at the library. Rhys usually referred to her as
the librarian
. Best that he didn’t let Mom or Stepdad #4 find out he knew someone with money. Librarians didn’t have money. Senators’ wives did.

“That’s fine. Good luck with your thing here, and we’ll talk more about Dallas when you get home.”

“Sure. Bye.” Rhys slammed the door so it would close all the way. He jogged up the front sidewalk and paused at the sight of fellow senior, Portia, waiting to get in. They’d hooked up a few times. “Hey.”

Portia glanced around as if to see who was watching, and her friends fell back, giggling. “Hey,” she replied, and twisted her blonde hair around her finger.

“You don’t have to stay in this corral. I can get you in early.”

Portia’s eyes brightened a second. Then, she bit her lip and shook her head. “No thanks.” She lowered her voice. “With Thane in Alaska for only a few weeks and all, it wouldn’t look right. Too soon, you know.”

“Sure. Later.” Rhys turned his back on her and shook off the tension gathering in his shoulders. He was so sick of girls who’d hook up at parties but not in front of their rich friends. When he and Portia had gotten together, Portia had said she and Thane were no longer a couple. That had been a lie. With Thane in Alaska, there was no reason Rhys and Portia couldn’t go public. No reason other than the fact that Rhys lived in the crappiest part of town, in the worst trailer there, with a mom who occasionally showed up in public loaded.

“Later, okay?” Portia called after him.

Kaitlin placed a mint-mango cupcake on her roommate, Elena’s, nightstand. She clicked off her lamp so heat from the bulb wouldn’t melt the icing. The orange color would remind Elena of their roommate, Geneva, who’d gone home early. When was the school going to give them an update on Geneva’s status? Was she okay? Would she be coming back soon?

She moved over to her own bed. Someone had left two envelopes on her pillow. All the students were getting crazy, mixed-up transcripts of their emails. They didn’t know who sent them. The contents made no sense. She picked up her letters. No such luck in her case. Both letters were from Manhattan. One was from her parents.
Study hard.
The other was from her friends, Regina and Raven, back at Shay Prep, the most elite school in Manhattan.
Hey Kit Kat, what’s the fashion like in AK? Boys? Kissed a guy yet?

Kaitlin dropped the letters and reached under her pillow. She pulled out a souvenir from the Soul Mate Project. The small shard of plastic read,
98%
. Ninety-eight percent was the highest ranking love match here. The only problem was: she’d been matched with a guy named Rhys Zukowsi from Elena’s hometown—a guy who wasn’t here because Elena had switched his entrance exam with Thane’s.

She was meant to meet her soul mate in Alaska, and he was stuck back in a place called Trallwyn, Texas. She sighed. Why would she want to kiss some random guy when her soul mate had been identified—a guy she’d be compatible with forever? She knew how much compatibility mattered. Her parents barely got along. But, no way they’d divorce. How would that look?

She pressed her fingertips to her lips. Would he be her first kiss?