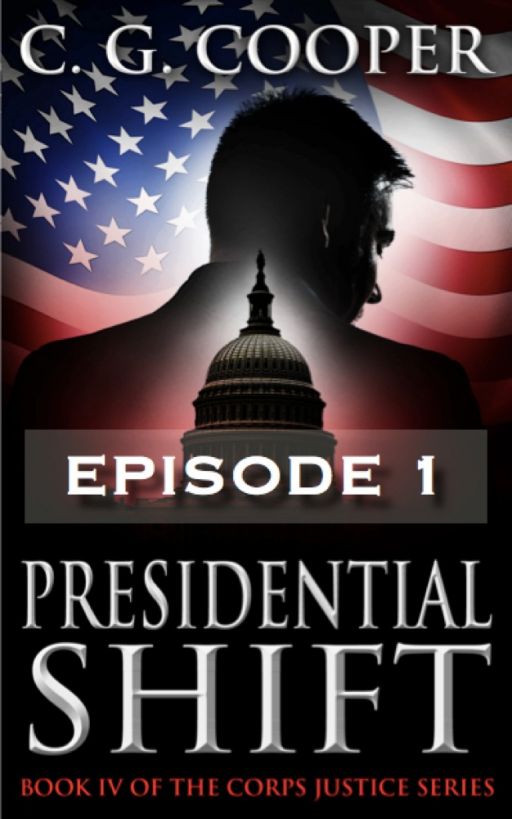 Book 4 of the Corps Justice Series

This is a work of fiction. Characters, names,
locations and events are all products of the author’s imagination.
Any similarities to actual events or real persons are completely
coincidental.

Warning:
This story is intended for
mature audiences and contains profanity and violence.

To our amazing troops serving all over the
world, thank you for your bravery and service.

The runner sped past a woman pushing
a lime green jogging stroller. Despite his fast pace, the
jogger didn’t look
winded.

Adjusting his white Adidas cap as he
turned into the public park, he scanned the area from behind Oakley
running glasses. His brown hair could barely be seen peeking
out.

There was a hidden alcove of trees off to
the right and he ran that way. Headed toward a row of park benches,
he waved to a thin man seated wearing a heavy parka. The
dark-complexioned man looked up from an Arabic newspaper at the
sound of the man’s footfalls and returned the wave with a
smile.

The runner floated to a halt in front of the
bench surrounded by a tight copse of pine.

“Morning, Mansoor!” the runner offered with
a smile.

“And a good morning to you, Richard,” the
Middle Easterner replied, in slightly accented English. “Are you
finished with your exercise already?”

The man nodded. “Yeah, just a quick run
today. Probably head to the gym after work. Mind if I stretch while
we chat?”

“Not at all. May I offer you some of my
tea?” Mansoor asked.

“Is it the stuff your cook makes?”

“That stuff is amazing. Much better than the
crap you get at Starbucks.”

Mansoor nodded. “It is one of the many
things I miss about my country.”

While the young runner Mansoor knew as
Richard stretched, the Arab poured out a cup of tea. Richard
glanced up casually to see his friend pouring a second cup, and
without taking his eyes off Mansoor, he reached down and looked to
be adjusting the sock around his ankle.

“Funny I keep bumping into you like this,”
Richard said.

Mansoor looked up from his tea. “If I was a
suspicious man, I would think you might be following me, Richard,”
he responded playfully.

His companion shrugged. “What can I say? I
guess I’m into good-looking Arabs with hot tea.”

Blood rose to Mansoor’s face as he waved
away the compliment. They’d only met days earlier, but had quickly
found they believed in many of the same things. Most importantly,
they’d spoken at length about the wars still being waged in the
Middle East. Mansoor had found it comforting to meet such an
enlightened, and handsome, American. It hadn’t taken long to figure
out that Richard was probably gay, although his last comment was
the most overt flirting either one had yet attempted.

“Why don’t you come have your tea?”

Richard nodded and sat down next to his
friend. He took the paper cup and held it up in a toast. “To new
friends.”

The two men tapped their cups together and
took sips of their tea. Mansoor savored the taste of his past. A
few minor errands, and soon he would return to his country. He
smiled at the thought.

Richard looked up from his tea and cocked
his head. “What are you thinking about?”

Mansoor shook away his thoughts and focused
on his prize. “I was thinking that maybe we should do dinner
sometime. What do you think?”

Richard’s light complexion flushed slightly
as he took another sip of his tea.

“What is it, my friend?” asked Mansoor,
stroking his slick goatee carefully.

“Come, Richard. You know you can tell me
anything. What is the matter?”

Richard took another hurried sip of his tea.
Mansoor placed a hand on his friend’s shoulder.

“Please tell me,” he whispered. His
oversized obsidian eyes glinted with excitement.

Richard nodded and leaned in to whisper in
his ear. Mansoor shuddered involuntarily and moved in closer.
Richard used his left hand to bring Mansoor’s head near. It was an
almost intimate gesture. His lips were right next to Mansoor’s
ear.

Richard whispered, “I have to kill you
now.”

Mansoor’s eyes widened as the killer
inserted a double-edged blade into his throat. He struggled against
the pull, but the executioner held on to his head and twisted the
knife, forcing the man’s lifeblood out in a steady flow. The
assassin was careful to cant his victim’s head to avoid the gushing
blood.

The Middle Easterner’s eyes glazed and his
movement stopped. Moving quickly, the assassin laid the dead man
down on the bench and covered him with the open newspaper, avoiding
the pooling blood. Next he wiped his blade on the man’s jacket and
returned it to its sheath.

He heard a rustling from the woods and
turned to see another man dressed in running gear walking toward
him.

“I’m good,” Cal Stokes answered. He looked
down at his watch and exhaled. “Let’s head back to the hotel and
get cleaned up. We’ve gotta be at the Oval office in two
hours.”

They’d been waiting for the president for
fifteen minutes.

“You think we should call him on the
fifteen-minute rule?” asked Cal with a smirk.

“I’m not sure that would go over well.”

“You’re probably right. Our professors at
U.Va didn’t like it much when we up and left after waiting for them
for fifteen minutes.”

“Is that really a rule?”

“Of course. That’s why they call…”

Before Cal could finish his sentence, the
president stepped into the Oval Office followed by two aides.

Both Marines stood to shake the president’s
hand.

“Doesn’t bother me, Mr. President. It was
Daniel that was about to enact the fifteen minute rule,” said Cal
with a straight face.

Daniel glared at his friend. There was an
awkward pause as the president glanced between the two men. A small
grin found its way to Cal’s face and the president chuckled.

“You Marines never let up, do you?”

The two men standing with binders behind the
president stared in shock. Cal winked at them.

“Don’t mind Mr. Stokes, fellas. We go way
back. Would you excuse us?”

One of the aides, a freckled-faced redhead,
looked like he was going to say something. He changed his mind and
the two men departed.

The President jotted something down on a
notepad.

“Can I get you two anything? Coffee, water?”
he asked.

“No, sir,” the Marines answered in
unison.

“Give me one minute and then we’ll head down
to the situation room.”

Cal looked at Daniel with one eyebrow raised.
The sniper shrugged his shoulders in response.

A minute later, the president ripped off the
sheet of paper, folded it, and stuck it in his pants pocket.

They followed him out of the Oval Office and
through the White House maze. Secret Service agents shadowed them
quietly. Few people they passed even looked up from their work. To
them, seeing the president was nothing new.

After being cleared, the trio stepped into
the secure conference room. There was one man waiting for them.

“What are you doing here, Brandon?” Cal
said.

“It was a last minute thing. The president
called me yesterday and said he’d been trying to get you to come in
for a couple months.” He scanned Cal’s placid face. They’d become
close over the previous months, with Zimmer often calling on Cal to
play devil’s advocate. “What have you been up to?”

“Nothing special. Just a little busy.”

Brandon looked at his friend for a second
longer, waiting for further explanation.

“Why don’t we all have a seat, gentlemen,”
the president suggested.

The four men took seats at one end of the
long conference table.

“First, I’d like to once again thank you for
saving my tail before the election. I will never forget it.”

Cal, Daniel and even Brandon had been part of
a dicey operation months earlier to uncover a plot by Japanese
imperialists and Brandon’s own father, Senator Richard Zimmer, to
kill the president and take over the country. Richard Zimmer was
now dead. It was a bullet from Brandon’s own hand that had done the
deed.

The event cemented the relationship between
Cal and Brandon. It had also tied them to the president. They’d all
agreed that the assassination attempt would be kept secret. So far
it had, and the president had won re-election without the sympathy
votes that such a revelation would have stirred.

“Second, I know I don’t have to tell you
this, but what I’m about to say stays in this room.”

The president took a weary breath. His face
sagged a bit as he looked down. When he lifted his head, his eyes
looked tired.

“I have reason to believe that someone within
my administration is leaking information.”

His small audience waited for him to
explain.

“I know what you’re probably thinking. Leaks
are as common as liars on Capitol Hill. But…this feels
different.”

He paused as if searching for the right
words. None came. The anguish on his face was plain.

“Maybe if you start from the beginning, Mr.
President?”

The president nodded and began.

“After the attack in Las Vegas, everything
seemed to go back to normal. Other than the usual threats, nothing
new came up. Right around the election, I’m not sure exactly what
day, I kept seeing the same man in the crowds. He wasn’t part of
any of my details. The man didn’t do anything except act like any
other onlooker. I can’t really explain what I saw. It was more
about what I felt. It was like he was watching me. I asked the
Secret Service about him, but by that time he had disappeared.

“Election night rolls around and it’s all
excitement. We were leading in the polls and, of course, eventually
won. That’s when things changed.”

The president looked up from his brooding
with a half smile.

“Sorry. I must be tired.” He took a moment to
gather his thoughts. “I won’t sit here and pretend that politics is
a clean sport. You know as well as I do that there are a lot of
shady characters running around D.C. trying to grab all the power
they can. I knew that going in. Before my first term, I made some
subtle promises. A wealthy donor would give X amount of money to my
campaign, and I promised to consider his help in the future.
Senator Zimmer can tell you that it’s as common as church on
Sunday.”

“After the attempt on my life that you
gentlemen so bravely thwarted, I…I started thinking about my
legacy. I started…”

He glanced over to see that Cal’s face had
hardened.

“Did I say something wrong, Cal?” asked the
president.

“It’s none of my business, Mr.
President.”

“What’s none of your business?”

“How you run the country.”

“I wouldn’t have asked you here if that were
the case.”

“Why don’t you say what you were thinking?
I’d rather know it up front before going further.”

“I don’t like politics, Mr. President.
Senator Zimmer can tell you that. I couldn’t care less about the
back room deals you make to get in office. To me it’s a bunch of
horse shit. You make a bunch of promises and then turn the other
way.”

The Good Thief by Tinti, Hannah
Hung Up by Kristen Tracy
When Wishes Collide by Barbara Freethy
The Galician Parallax by James G. Skinner
Pseudo by Samantha Elias
Ultimate Warrior (The Fight for Creation (Book Three)) by Andrew, Saxon
Power of the Raven by Thurlo, Aimee
The Loneliness of the Long Distance Book Runner by Bill Rees
A Photographic Death by Judi Culbertson
Unmasked by Nicola Cornick
Our partner