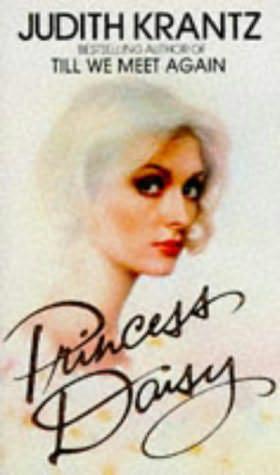 “With unfailing panache and a style that swoops from crisply cynical to downright voluptuous,
Princess Daisy
is a guaranteed winner.”

“This page-turner is a champion.”

“Judith Krantz has written the glamour novel of the year if not of the decade.
Princess Daisy
has the same storytelling assets as
Scruples
, only more of them. Glamour, glamour is everywhere.”

“
Princess Daisy
soars to the heights of escapist entertainment … It is delicious.”

“In true saga style, this blockbuster weaves its spell across an international landscape. A breathless spin of a romance.”

“Elegantly written, with verve and panache … a glamorous, extremely adult Cinderella story to delight millions of readers who relish nonstop entertainment. Rollicking wit, high drama, haute couture, and a fascinating cast of characters, who gallop from one sumptuous setting to the next.”

This edition contains the complete text of the original hardcover edition
.
NOT ONE WORD HAS BEEN OMITTED
.
PRINCESS DAISY

A Bantam Book / published by arrangement with Crown Publishers

All rights reserved
.
Copyright © 1980 by Steve Krantz Productions. No part of this book may be reproduced or transmitted in any form or by any means, electronic or mechanical, including photocopying, recording, or by any information storage and retrieval system, without permission in writing from the publisher
.
For information address: Crown Publishers
201 E. 50 St., New York, NY. 10022

Bantam Books are published by Bantam Books, a division of Bantam Double-day Dell Publishing Group, Inc. Its trademark, consisting of the words “Bantam Books” and the portrayal of a rooster, is Registered in U.S. Patent and Trademark Office and in other countries. Marca Registrada. Bantam Books, 1540 Broadway, New York, New York 10036.

W
e could always shoot this on top of the RCA Building,” Daisy said, walking past the parapet, above which rose a high, metal railing designed to forestall would-be suicides. “They’re not nearly as paranoid as you Empire State people.” She gestured scornfully at the ledge behind her. “But, Mr. Jones, if it’s not the view from precisely here, the message just won’t be New York.”

The man in uniform watched, motionless in surprise, as Daisy suddenly leapt high and held on to a rung of the railing with one strong hand. With her other hand she took off the sailor hat under which she had tucked her hair and let it blow free. The silver-gilt tumble was caught by the breeze that separated it into a million brave and dazzling threads.

“Come down, Miss,” the man in charge of the Observation Deck begged. “I told you it’s just not allowed.”

The uniformed official looked up at Daisy with perplexed admiration and dismay. He didn’t understand anything about her. She was young and more beautiful than anyone he’d ever seen but she wore a man’s moldy baseball jacket which bore the now mournful legend
BROOKLYN DODGERS
on its back, a pair of United States Navy sailor pants and dirty tennis shoes. He was far from a romantic man, but everything about her stung his imagination with
an unaccustomed fascination. He found himself curiously unable to look away from her. She was as tall as he, at least five feet, seven inches, and something about the way she walked had suggested the balance of the trained athlete even before she had jumped up to the perch from which she now gestured, intrepid, high-hearted, as if she were trying to catch a beam of the sun itself. The roof supervisor was aware of a particular clarity and cadence in her speech that made him think that perhaps she wasn’t American, yet who but an American would dress like that? When she’d first appeared all she’d asked was for permission to film a commercial on his roof and now she was hanging up there like a goddamned angel on a Christmas tree. Thank heaven the place was closed for the day.

“You can’t go up there. You didn’t tell me you wanted to the last time you came,” he reproached her, circling cautiously closer. “It’s never permitted. It could be dangerous.”

“But all great art has to break rules,” Daisy called down to him gaily, remembering that when she had first checked out this location, a week ago, two twenty-dollar bills had ensured Mr. Jones’s cooperation. She had many more twenties in her pocket. Several years as a producer of commercials had taught her to travel strictly on folding money.

Daisy scrambled a little higher and took a deep breath. It was a fresh, glinting spring day in 1975 and the wind had blown all the soot away from the city; the rivers that circled the island were as blue and as lively as the ocean itself, and Central Park was a great Oriental rug flung at the feet of the gray apartment buildings of Fifth Avenue.

She smiled down at the worried man looking up at her. “Listen, Mr. Jones, I know all three models we’re going to use; one of them lives on raw veggies and is working on her black belt in Karate, the second has just been signed for her first movie and the third is an est trainer who’s engaged to marry a man with oil wells—now, would three wholesome American girls like that have any intention of jumping? We’re going to build a strong, absolutely safe platform for them to stand on. I guarantee it personally.”

“A platform! You never said …”

Daisy jumped down and stood close to him. Her dark eyes, not quite black, but the color of the innermost heart
of a giant purple pansy, caught the late afternoon light and held it fast, as she deftly pressed two folded bills into his hand. “Mr. Jones, I’m sorry if I alarmed you. Honestly, it’s safe as houses up there—you ought to try it.”

“But you never said anything about going
above
the roof level,” he grumbled.

“Roof level!” Daisy said indignantly. “If all we wanted was a simple high view there must be a dozen buildings in this city we could use—but we want yours, Mr. Jones, no one else’s.” The story board for the commercial had specifically stated the Empire State Building. Leave it to Revlon to complicate her life. As Daisy reached into her reserve pocket for an additional twenty, she remembered that, three years before, when she had started working as a production assistant, she had first seen a taxi-cab driver cheerfully accept forty dollars to turn off his meter to allow his taxi to be used for six hours in the background of a street scene. “But that’s bribing people,” Daisy had objected. “Think of it as rent, if you want to stay in the business.” She’d been warned, and she’d taken the advice. Now, as the experienced producer of many of the best commercials ever filmed—if you like commercials—Daisy was hardened to the objections of civilians, and if Mr. Jones was more difficult than many, he was easier than some. Her next gambit was the one that usually clinched matters.

“Oh, I forgot to tell you,” she said, coming closer to him. “The director wanted to know if you’d be in the commercial, standing there in the background, like the keeper of the keys to the kingdom. We only pay Screen Actors’ Guild minimum, so you don’t have to do it if you don’t want to—we could hire an actor to play you, but it wouldn’t be nearly as authentic.”

“And, of course, you’d have to have make-up,” she said, playing her best card.

“Oh. I guess it’ll be all right. Yeah, without wind in the hair why would you need hairspray? I see your point. Make-up, huh? And would I have to wear a costume?”

“Your uniform will be perfect, just as it is. Goodbye,
Mr. Jones—I’ll see you first thing Monday morning.” Daisy waved cheerfully at him as she walked toward the covered center core of the building. As she waited for the elevator to reach the eighty-sixth floor, the blonde girl in the baseball jacket, born Princess Marguerite Alexandrovna Valensky, reflected that it was truly fortunate that there was one thing you could count on in this world:
everybody
wanted to be in show biz.

Mr. Jones was only one in a long line of men who had been fascinated by something in Daisy Valensky. Among the first of them had been the famed photographer, Philippe Halsman, the man who would take more
Life
cover photographs than any other in the history of the magazine. In the late summer of 1952 he had been assigned to take Daisy’s first official photographs for a
Life
cover, since absolutely everyone, or so it seemed to the editors of the magazine, wanted to know what the child of Prince Stash Valensky and Francesca Vernon looked like. The sudden marriage of the great war hero and incomparable polo player to the matchless romantic American movie star had intrigued the world and inspired rumors which were only expanded and exaggerated by the seclusion in which Prince and Princess Valensky had lived with their first child since her birth in April.