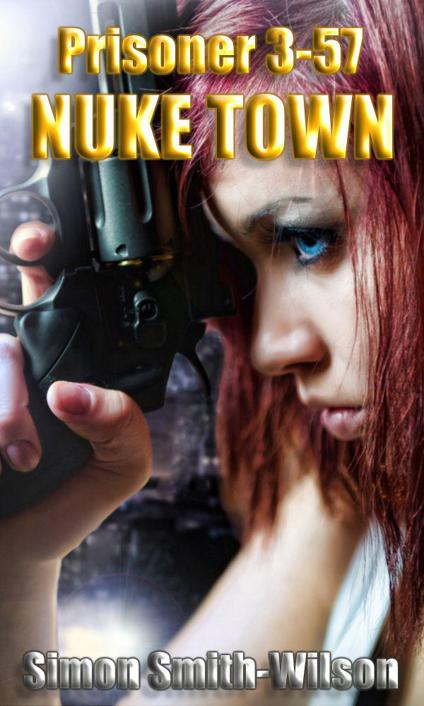 The
Legend of the Hermit Master

The
mind altering prisoner programme is in jeopardy. The alliance has
lost control of the Prisoner X experiment. The safety protocols have
been removed, if you die in the game you die in reality. Prisoner X
has control of the game. Players, clients and prisoners are being
ruthlessly killed by hordes of blood thirsty demonic aliens. Prisoner
X must be stopped before it’s too late. The council had
decided. To stop a cold hearted killer they must use the most
dangerous man at their disposal. A full pardon is on the table.
Prisoner 3-57 and a band of survivors set out on a hellish journey to
locate and kill Prisoner X, but first they must fight their way
through a horde of indestructible zombies. The planet runs red with
the blood of our heroes. Friends will be lost, courage will be tested
and fears will be faced. Prisoner 3-57 will learn the shocking truth
they never told him. Untold secrets will change all that he thought
he knew about who he really was. Prisoner 3-57: Nuke Town puts you
into the centre of a fast paced, action packed psychological epic.

Chapter One: Back to
Reality

I
woke to the sound of voices. A groan escaped my lips, as I tried to
open tired eyes. My head was groggy, my body weak. It felt like I had
the hangover from hell. Someone was having a conversation, but my
brain didn’t have to strength to multi-task at this moment in
time. I have to wake up first. I feel exhausted. Where am I? What
happened last night? Suddenly, a rush of memories poured into my
brain. It was like watching a movie within my mind’s eye, but
at ten thousand times the normal speed. It wasn’t just one
movie. It was the same movie, over and over again.

I
had killed them.

I
had killed my friends.

I
had killed them all.

I
defeated her and I died.

That
giant beast of a machine had cut us down.

How
am I still alive?

‘
The
man of the hour is awake,’ said a voice from the far end of the
room.

My
eyes creaked open. I was sitting in a boardroom. A long wooden table
sat in the centre of the room. At least two dozen men and women,
wearing expensive looking suits, were facing me. At the far end of
the room was a man. He had to be in his mid-thirties. This man was
different. He wore a t-shirt with a dragon, drawn in the Japanese
anime style, and had on casual looking jeans. He looked as out of
place as me. I tried to move, but metal pinched my wrists.
Unconsciously, I glanced down at the handcuffs that locked me to the
arms of my chair. What the hell was happening here?

‘
Call
me Ian,’ said the man with the dragon.

‘
Mr
Owen,’ repeated the woman, ‘You cannot be serious about
this.’

‘
I
am deadly serious,’ he countered. ‘General Riggs, do you
care to step in?’

A
man appeared from the side of the room. I hadn’t even noticed
he was there, but he was a hard man to miss. The guy looked as mean
as they come. He wore combat trousers, and a black short sleeved
t-shirt, and had a pistol on his hip. He had a scar down one side of
his face and sported a military style crew cut. If I had to guess I
would say he was in his early fifties, as his hair was starting to
grey.

‘
The
Prisoner X experiment is a failure,’ said Riggs. ‘Prisoner
X is out of control. He has taken over the game. Mr Owen and the game
designers were working on a new tactical level. They were expanding
the idea of using the prisoners own subconscious fears to help create
the perfect punishment, which would make each game unique for the
players, but it would also aid in the development of the new Ranger
training program.’

‘
What
went wrong?’ asked one of the board members.

‘
Prisoner
X took control,’ replied Ian. ‘The Prisoner X program was
based upon the Prisoner 3-57 program. It was the perfect punishment.
We created a world for Prisoner 3-57 and he created his own living
nightmare. We gave Prisoner X the power to construct the reality in
which the players played in, but we gave him too much power. He has
somehow managed to remove the safety protocols.’

‘
What
does that mean?’ asked another.

The
room was in uproar.

I
surveyed their faces. Panic was the general consensus.

‘
That
is impossible. We have four million players in the game. We shut it
down and the players would all die from the shock. The game is their
reality. The only way to escape the game is to die, but that option
is no longer available now. If they die, they die. Prisoner X has
convinced the virtual world that it is reality.’

All
eyes turned back towards me.

‘
You
are putting your hopes on him?’

‘
No,’
replied General Riggs, ‘I have a team on standby, but the game
isn’t something you can train your men for. They are going to
be sent into a hostile environment unlike anything we can imagine.
The new world is constructed by Prisoner X. They will be sent into a
world built by the most disturbed, dark and disgusting thoughts of a
serial killer. Prisoner 3-57 has just spent the last year of his life
living the same gruelling nightmare over and over. He will be our
secret weapon. Prisoner X has so far turned his attention onto the
players and has been ignoring the Prisoner’s in the game. Of
the six hundred prisoners in the Prisoner Program only two-hundred
and seventy-one are still alive. We have lost communication and
control of all of them. Prisoner 3-57 is the only prisoner not
currently in a game.’

‘
We
were constructing a new multi-player level for him,’ said Ian.

‘
What
are you getting at?’ asked a young man.

‘
Prisoner
X is going after civilian players. He is not going after prisoners.
Prisoner 3-57 will be able to get close enough to Prisoner X to take
him out. We kill Prisoner X then we can save the four million players
currently trapped in the game. Once he is dead the game controls will
return to us. We will instantly halt the corrupted game in progress.’

I
glared down the table at him.

‘
Because
I am going to offer him a full pardon and tell him the truth about
his sister...’

His
words hung in the air for the moment. He was going to tell me the
truth about my sister? I already knew the truth. Rose wasn’t
real. I am a paranoid schizophrenic. She took control of my body and
killed my friends. All the bad things I thought she did in her life,
I did them.

‘
Prisoner
3-57 believes his sister was a figment of his imagination, but this
was the punishment he created for himself. His biggest fear was
losing the one he loved, but he already lost her when he was sent to
prison. Prisoner 3-57 created a fake reality and convinced himself
that she wasn’t real, but he isn’t sick. He never was
sick. Rose is real.’

‘
You’re
sister is real. She is alive. And you can have her back.’

This
couldn’t be true.

‘
All
you have to do is kill Prisoner X,’ explained Riggs.

Chapter Two: Where
is Rose?

A
strong hand was shoved into my upper back, nearly forcing me to
stumble over. I still felt somewhat groggy, but my senses were
finally starting to return. Two armed guards were marching me through
a network of corridors. From the constant hum that seemed to vibrate
out of the floors and walls I knew I was on a star ship. People
passing me by wore the classic deep space military uniform of tanned
shirt, black tie and black trousers. They all gave me a wide birth.
At the end of the corridor were two elevators. I was roughly pushed
into the one on the left. One guard turned his attention to the
selection of buttons by the door, whilst the other stood to my left
hand side.

This
was their first mistake.

It
was the last one they were going to make.

I
wasn’t going back into some virtual reality prison sentence.

I
was getting out of here.

When
I moved, I moved fast. I turned to the left and head butted the guard
straight on his right temporal lobe. A bone crunching snap echoed
into the air, as he bounced off the wall. I instantly turned for the
other guard. He was in mid-turn when I hit him. My shoulder was
rammed into his side, as I body slammed him into the wall. We both
fell down onto the ground. I fell on top of him. This put me at a
disadvantage as my hands were bound behind my back. I did what came
naturally. I sank my teeth into his throat. The man’s agonising
screams filled the air, as I ripped through his flesh. The sickening
taste of his blood filled my mouth. The man thrashed about for a
moment, but I had already forgotten about him. I was turning my
attention to the unconscious guard. He had a set of keys on his belt.
It took some manoeuvring, but I started to test each key with the
lock of my handcuffs, as I knelt down on the floor beside him. The
whole time my eyes looked at the screen that showed what floor we
were on.

I
snatched the handgun from the holster of the soldier bleeding out.