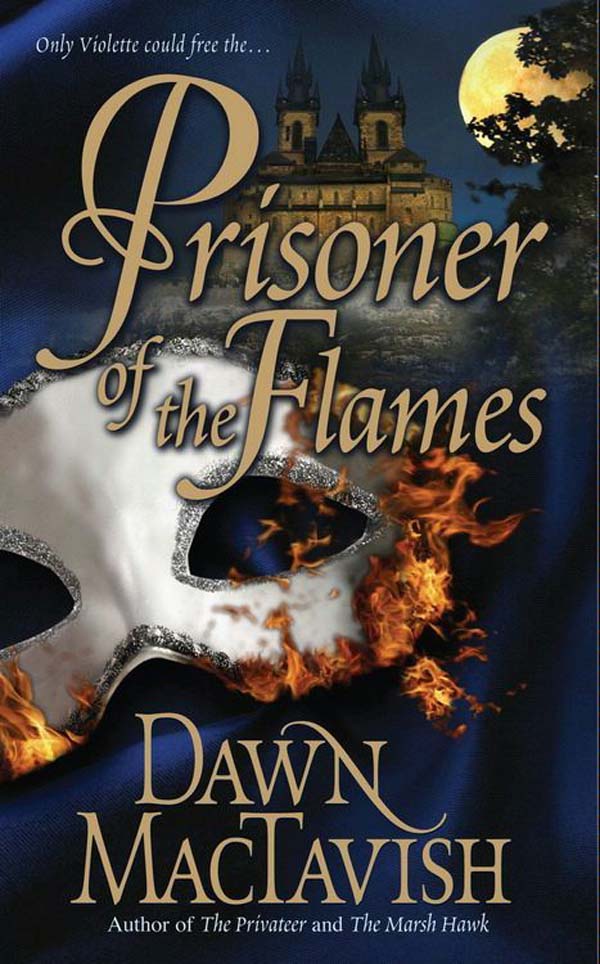 Prisoner
of the
Flames

“You heard the gendarmes when they removed my helm and saw my face.”

“Oh, no,” she contradicted. “My hands are my eyes, my lord, and they see quite well. I bathed your face a good many times while you slept. Your jaw is firm and squarely set, and your chin wears a fine, deep cleft. Your lips are strong, and your cheeks are like that of a marble statue I once touched in a great cathedral. Your nose is arrow-straight. It is the proud nose of a Celt, from what I have heard told—bent ever so slightly below the bridge. Your brow is broad, and flat, the eyes deeply set beneath the ledge of it. They are marvelous eyes. They are the most marvelous of all.”

“No,” she insisted. Grasping his hand, she raised it to his face. “Here…see for yourself.” He tried to pull away, for he detested the feel of it, but she held his hand securely. “Trace the bones, my lord,” she instructed. “Feel deeply…feel what lies beneath die scars. Pay them no mind. They only mar the skin on the one side, and go no deeper. The other side was not touched by the flames. The bones themselves have not been harmed. Their structure is sound. Feel both sides now…see? You are…beautiful! I can see you just as God made you.”

My sister, Diane Mae Thompson
—
thank you, for giving me
Green Darkness.

The Ladies of
Goth Rom,
who gave me
the foot in the door.

Deborah Anne MacGillivray
—
never enough thanks
for all you do.

This title was previously published by Dorchester Publishing; this version has been reproduced from the Dorchester book archive files.

T
he nursemaid lowered the Laird of Berwickshire’s heir into
his cradle in the nursery. He was just a sennight old, born of the lady Gwen to her husband Robert Mack. They had come to celebrate the Easter feast with Laird and Lady Hume, Lady Gwen’s half sister, who was herself enceinte.

The bairn, having just come from his mother’s breast, made no protest, and sleep soon closed his eyes. The night was cold and the young nurse tucked a throw made of pelts about her charge. Howling winds assailed the turret walls and tortured the candle flames, which threw long fingers of fractured light across the child’s face. Cascades of molten beeswax, sculpted by the drafts, flowed along the candle shafts until they overflowed the drip pans and anchored the tapers to their stand behind the cradle. Now and then some wax spattered upon the herb-strewn floor and hardened there. The nursemaid took no particular notice. She paced impatiently before the hearth, evicting a large bullmastiff reclining on the stone. The animal lumbered off complaining, finding safer sleeping quarters along the curve of the turret room wall.

The nurse raised her arms above her head and stretched like a cat, sliding her open palms along her body as she lowered them again. She moaned as they slid over her breasts, the hardening nipples protruding through her homespun shift, and let them linger there, fondling, until a rush of aching warmth started deep inside her.

Would he never come? She began to pace again, watched by the dog that gave a warning growl each time her path
crossed too close to its tail. Its ears pricked up as a faint knock came at the nursery door—one rap, then a pause, then two quick raps—and the nurse hurried through and into the arms of the young bondservant she had been expecting. He whisked her quickly away to a vacant chamber on the far side of the corridor, and gathered her into a frenzied embrace that soon saw them naked in the lightning-touched darkness, their anxious bodies entwined on a pallet of straw in the corner. Her duty forgotten, the young nurse spread her legs and let her lover fill her, exchanging moan for moan in their illicit coupling.

In the nursery, the baby stirred. The loud voice of the storm bled into his sleep, and a clap of thunder overhead startled him awake. His crying brought the dog. Frightened by the noise and rampant lightning flashes spearing through the arrow slits, the animal began to whine and bark and prance about the cradle, pawing the side with its great clumsy feet, which only made the child’s cries more acute.

All at once, a great clap of thunder rumbled overhead, reverberating through the sparsely furnished chamber. The mastiff spun wildly at the sound, displacing the tall candle stand with its rump, and the candles fell upon the cradle, igniting the child’s loose-fitting cap, fur rug, and long Holland gown. The infant’s cries echoed along the corridor, arousing his mother, asleep in the arms of her husband in their chamber next door, and she reeled into the room screaming at the top of her lungs. Barefoot and tugging on his leggings, the duke was close behind, but before he could stop her, Lady Gwen had plunged her hands into the blazing cradle, snatched up the child, and smothered the flames against her breast.

The fire spread quickly. Fanned by the drafts from the window, the flames traversed the floor and ran up the timber supports to the exposed beams above. Drenched in pitch, they were soon aflame, and fire rained down all around.

New shouts, riding the plumes of acrid smoke that belched through the wide-flung door, soon mixed with those of the Macks. Laird and Lady Hume had arrived, and the young nurse leapt from the arms of her lover and groped her way into the hall. Her long hair loose of its headdress, and her trembling breasts barely covered by the gaping shift she’d donned without a girdle, the girl screamed at the sight of the chamber engulfed in flames.

Mother and child shrieked hysterically, gulping smoke-filled air fetid with the stench of burnt flesh and hair: both the child’s and the dog’s. Laird Mack dragged them through the billowing curtain of smoke that the drafts had pulled into the corridor and past a string of castle guards and serfs rushing in with buckets of water and sand.

“Bring the healers at once!” Lady Hume shrilled at one of the guards over the conjoined rackets of pandemonium and storm. She seized the inconsolable nurse, and thrust her toward her husband. “Hold her!” she charged. “She dies for her pleasure this night.”

Dawn rose on the gutted turret nursery still trailing smoke through a gaping hole in its roof, but the young nursemaid did not see it. She had been put to death for her negligence—her lover as well. Such would have been the dog’s fate if it hadn’t died in the fire, for its part in the tragedy was clear. It was found beneath the heavy iron candle stand it had knocked over.

Heavily dosed with poppy and herbs, Lady Gwen Mack tossed in the elevated bed in her chamber, her scorched hands and forearms slathered with an unction made of marigold and comfrey and bound loosely in linen gauze. Drugged though she was, her moist eyes flashed toward her approaching husband and Baldric, the head healer.

“Our son…?” she pleaded, addressing Laird Mack. But it was the healer who answered.

“Calm yourself. He lives, my lady,” was the reply, and the man lifted her head to administer more of his drugs. “And he will recover. You have my oath. He is of strong warrior stock.”

“Haddock stock,” she said, her words riding a sigh of relief. She was speaking of her own ancestral line, the Haddocks: fearsome champions of the border wars. Though her lineage had always been a sore spot and a jealous bone of contention where her husband was concerned, since the Macks had not the legendary reputation of the Haddocks, she could not curb her boasting. Even now. “I want to see him,” she said, her voice slurred. The drugs were working. “Bring him to me.”

“Not…yet,” Baldric said. His response was a little too loud and quick to avoid her exchanging glances with the duke, whose eyes also held a silent question. This exchange prompted a slow wag of the healer’s head in a disparaging, silent “no.” “He wants rest, and so must you, my lady.”

“But I must nurse him,” she groaned. She hadn’t missed the two men’s guarded exchange. What was Baldric keeping from her? Many a healer had lost his life for nothing more than bringing bad tidings to nobility, and he’d doubtless seen the freshly severed heads of the nurse and her swain impaled on pikes along the stronghold wall, a grim warning to the rest of the servants. Was the news of her son so dreadful that he dared not speak it for fear of his own head? If not so, why was he so slow to reassure her?

“A wet nurse will suckle him for now,” the healer replied to her mumblings. “You cannot hold him as you are, and the poppy has surely tainted your milk in any case. Take ease, my lady. All that can be done is being done.”

“Has God been…merciful?” she pleaded. “Tell me the truth—the pair of you. Would it have been best if—”

“God evidently thinks not, my lady,” the healer interrupted. “Else He would have surely taken the boy. It is nothing short of a miracle that he lives.”

“It is worse than I feared!” she groaned.

“My lady,” the healer said, hesitating. “What the young laird has need of in this life, we must pray that the Almighty has left him. You must give thanks that the heir lives to carry on the line…and leave the rest in the hands of God.”

Listening to Mondrian by Nadia Wheatley
The Secret City by Carol Emshwiller
Honesty by Viola Rivard
The Joneses by Shelia M. Goss
Andersonville by Edward M Erdelac
Born to Run by James Grippando
Lola's House (Lola Series) by Groers, Suzie
House of Corruption by Erik Tavares
The Last Supper: And Other Stories by Howard Fast
Stain by Francette Phal
Our partner