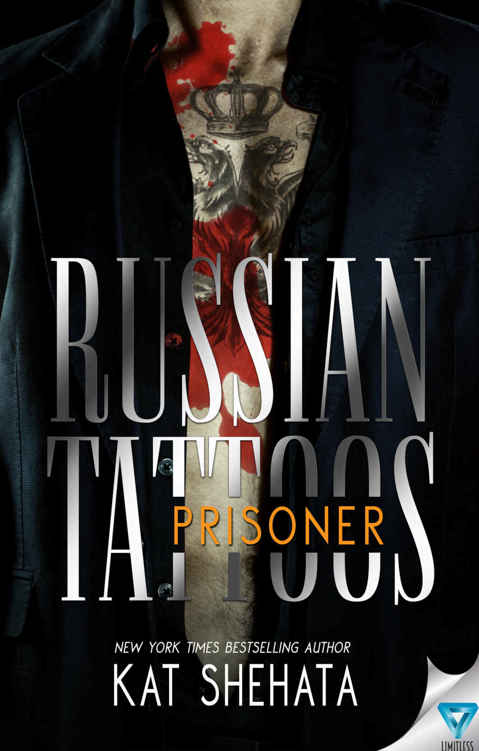 I woke up with a silky blindfold wrapped around my head, a throbbing headache, and a sickening feeling in my gut. I tried to get out of bed, but my wrists were bound at my side.

I stretched in my restraints to assess my situation. My legs were free, no gag. A feather pillow was tucked under my head, and a soft blanket that smelled new, like it had been unwrapped from plastic, covered my body.

I held my breath and listened for signs of life. “Kiki?” I whispered. Nothing.

My muscles felt shredded, as if a pack of wolves had each taken a limb and pulled me in four different directions, and with every breath a sharp pain needled in my side. No serious injuries or broken bones as far as I could tell. Then a new fear took over me. I scooted back and forth to determine if I still had on clothes. My feet were bare and my jeans off, but the lacy fabric of my underwear rubbed against my skin, my underwire bra poked my ribcage, and I felt like I had on a t-shirt or a dress covering my body. Having clothes on had to be a good sign.

The drugs had knocked me out cold, but I didn’t feel like I’d been assaulted. My ex-fiancé was behind our abduction. Knowing Vladimir, he wouldn’t take my virginity while I was unconscious. He was the
pakhan
, the boss, of their mafia family, and his ego would demand I remember every moment of our first time together.

“Kiki?” I whispered louder to wake her up.

I tried to piece together a timeline of how long I’d been out. The last place I remembered being was at the airport in Cincinnati, ready for a wild spring break trip to Punta Cana. Then two thugs grabbed us on the shuttle bus. One of them injected a needle into Kiki’s arm. Vladimir’s henchman
Boris made me drink spiked vodka—then nothing. While we were unconscious, they’d probably transported us to their hometown of Ekaterinburg. In Russia.

The shock of waking up strapped to a bed was wearing off. Fear and panic had taken over. I yanked and pulled on my restraints. My heart raced. Sweat trickled down my back. At any moment, I would have to face Vladimir.
Will he hurt me?
If he was still angry with me he would, or he’d have Boris do it. What would that monster do?

Where was she? Did they kill her to keep her quiet?

I gasped for air. This was real. My best friend and I had been kidnapped by the Russian mafia.

Heavy
footsteps pounded toward me. A lock clicked. A door squeaked open.

“No.
Nyet
. Stay away from me. Don’t touch me.” Unable to see who had entered the room, I thrashed my legs and snapped my teeth, ready to bite a hand or a face or whatever came near me. A male voice I didn’t recognize scolded me in Russian, shoved a gag in my mouth, and cranked it tight behind my head.

A cool blade slid in between my left wrist and the straps that secured my arms to the side rail. With a knife that close to my artery, it would’ve been in my best interest to relent and stop thrashing, but my survival instincts took over. The second he sliced that hand free, I went after him like a crazed animal, clawing at his face like the keys to my freedom were buried somewhere under his skin.

“
Nyet
, Carter,” he chastised me in Russian, adding a
sh
and a
tsk
to compensate for the language barrier. He folded my arm across my chest, cut the strip that secured my other wrist, and dragged me out of the bed.
Head rush.
Unable to see, I couldn’t tell if I was upside down or right side up. The guy held onto the base of my ponytail, latched onto my shoulder, and shoved me forward.

With the gag in my mouth, I couldn’t catch my breath. I was going to suffocate. Disoriented and weak, I dropped to my knees. He scooped me up and cradled me in his strong arms. As he walked, the rocking motion made me seasick. If I vomited, I would choke to death. I tried to keep my head still. He stopped. A door creaked open. He pushed me down in a chair.

The thought of what the Russians were going to do to me made my stomach churn. I tried to slide down the chair to get away, but the guy grasped my shoulders and held me in place. I heard someone breathing a few feet in front of me and smelled the noxious odor of burning tobacco. The thug unraveled my blindfold, and a rush of bright fluorescent light cut across my face. As my vision came into focus, Boris’s black eyes fixated on me from across the barren concrete room.

Boris. Sitting across from me. Vladimir’s right-hand man with the power to punish me in every unspeakable way he could think of. I was trapped in a cold, cement cell with the monster who dominated my nightmares. Begging for mercy would only fuel his desire to watch me suffer a slow, agonizing death. My face burned. My body slumped forward. The guy behind me held my shoulders and brought me back to center. My chest heaved. I fought for air.

Boris spoke to my handler in Russian, which prompted him to remove the gag. I gasped and sucked in huge breaths of air in case it was taken from me again. Boris watched me struggle with the calculating eyes of a killer, enjoying my fruitless plight to stay alive. Once air filled my lungs and I caught my breath, I lashed out at my captor.

“Dad will report me missing. Everyone will know it was you.”

The guy behind me, who I still hadn’t seen, clicked his tongue, shoved the gag back in my mouth, and cranked it behind my head. I whimpered. The tough girl act wasn’t fooling anyone, not even me.

“Evidence left at the scene of the crime tells a different story.” Boris took a drag off his stogie. A ring of smoke hung above his head like a polluted halo. His lips curled into a sickening smile. “I warned you. I can make anyone disappear.”

Through my tears, I caught a glimpse of my handler, a muscly brute around my age with bold green eyes like a panther. He had fresh bruises and scrapes on his milky-white face like he’d been in a fight. He was no doubt one of the low-ranking
patsani
for the Russian mob. A malicious young recruit with a passion to earn his way up the chain of command, willing to commit whatever sins necessary to appease the heartless
Bratva
.

To protest the gag, I pounded my palms on the armrest.

Boris leaned his humungous body back in the chair and scratched his bristly salt and pepper beard. I wished I had taken in more oxygen when I had the chance. I inhaled as much air as I could, but my nose was runny from all the crying. Every time I sucked in, mucus blocked my airway. I tried to tell them I couldn’t breathe, but the gag muffled my words.

“You want Dmitri to remove the gag?”

“You will keep your mouth shut?”

Boris snapped his fingers. The guy, apparently Dmitri, removed the gag. My lips trembled. I sucked in and out like a toddler calming down from a tantrum as the consequences of pissing off the Russian mob raced through my mind. Rape, torture, beatings…
Vladimir is going to make me suffer for my crimes against him.

I had to focus on surviving and push away the thoughts of the unspeakable acts of terror they would inflict on me. They were holding me in some sort of creepy interrogation room. There was a blinding fluorescent light glowing above a metal table, Boris and I occupied the chairs on either side, and the only other thing in the room, besides buckets of testosterone and an ominous cloud of smoke, was a punching bag hanging from the ceiling in the corner.

As I caught my breath and staved off a panic attack, Boris cocked his head and clicked his fat gold rings on the table. “Better?” Without waiting for my response, he continued. “This can be easy, or this can be hard. How this plays out will be determined by how well you follow the rules.”

“Rule number one: No questions,” he said. “Do you understand, Carter?”

Dmitri wrapped his hand around the back of my neck and squeezed lightly, a subtle reminder that it was in my best interest to comply with the ruthless gangster sitting across from me.
Message received
. I eked out a nod.

“Rule number two: Do
exactly
as I say.”

“Rule number three: Relax. This will all be over soon.” Boris’s jaw was tense, and he was beyond frustrated with having to deal with me. He served as a hit man for the mob, but when Vladimir wanted to get closer to me, he dragged Boris to America and charged him with tracking and reporting my every move. He followed me around campus, stalked me at the tennis club, and sent his goons to spy on me and keep me out of trouble while I was out with my friends.

The most twisted thing about my history with the Russians was that Boris and I had spent so much time together, we had bonded in an unholy, dysfunctional kind of way. Vladimir was still obsessed with me and had probably given Boris orders to drag me to Russia so he could torture me or turn me into a sex slave or keep me chained down here in this dungeon as some kind of pet or trophy or toy.
I’m never going to fucking relax.
The monster in front of me had no soul. I closed my eyes to make him disappear.

“Open your eyes.” Boris slammed his heavy hand on the table between us.

Startled, I did what I was told. Boris stalked around the table and leaned into my face, so close I could smell the tobacco on his breath.

“Remember who you’re dealing with, dear. You’re in our world now. No papa, no police, no problems.” He patted my cheek. “You know better than to fight me. Cooperate and you’ll not be hurt, understand?”

He was lying.
I’m going to die in this dungeon.
My survival skills kicked in when I got a good look at Boris’s prison tats, namely the chain that wrapped around his arm like a long blue snake. Each link represented someone’s life he had taken. I kept my mouth shut and nodded obediently.

Live to fight another day.

No Horse Wanted by Melange Books, LLC
High Maintenance by Jamie Hill
Coming Home by Lydia Michaels
The Fourth Stall Part III by Chris Rylander
Just That Easy by Moore, Elizabeth
Stepbrother Romance 3 - Addicted: A New Adult Alpha Billionaire Romance by Taylor, Tawny
A Whispered Darkness by Vanessa Barger
The Night Listener and Others by Chet Williamson
Do Not Disturb by Stephanie Julian
Acres of Unrest by Max Brand
Our partner