Profile of Fear: Book Four of the Profile Series (Volume 4) 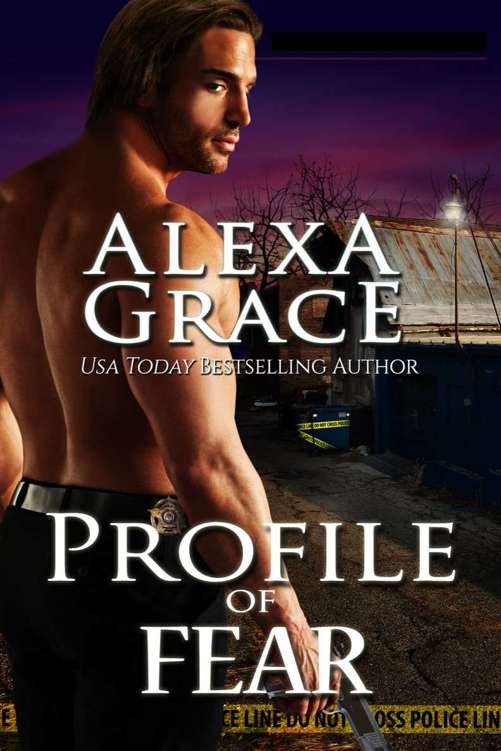 Book Four of the Profile Series

“Grace delivers enough sizzle to raise the temperature, showcases her talent for sharp repartee and executes the action like an ace fighter pilot. With riveting suspense and commanding characters, this is one addicting, must-have summer read.”

“…great chemistry, a great sexual tension, and enough drama to fill a corn field…really great mystery, with just a touch of horror in the form of a serial killer…I definitely recommend this if you are into romantic suspense novels!”

“With engaging characters, witty banter, a sexy hero, a feisty heroine, murder, suspense, romance, a serial killer, what’s not to enjoy in this fast-paced romantic suspense. If you enjoy Cherry Adair and Catherine Mann’s writing, you’ll enjoy Alexa Grace. What a strong debut!”

“Alexa Grace is one of the most talented, upcoming authors. Her characters are believable and strong, her stories credible, her writing, fabulous. She has an easy-to-read style that provides enough details without being overtly graphic.”

This novel is a work of fiction. Names, characters, places and incidents are products of the author’s imagination or are used fictitiously. Any resemblance to actual events or locales or persons, living or dead, is entirely coincidental.

This novel is licensed for your personal enjoyment only. It may not be re-sold or given away to other people. If you would like to share this work with another person, please purchase an additional copy for each recipient. Thank you for respecting the hard work of this author.

The Profile Series by Alexa Grace

Other Books by Alexa Grace

About the Author – Alexa Grace

This book is dedicated to my sister and best friend, Karen Golden-Dible. Thank you for your unconditional love and support.

It is also dedicated to Drs. Patrick Loehrer and Bryan Schneider, my cancer-fighting superheroes.

Leaning against a tree, he adjusted his ball cap to better cover his face as he searched the crowd. He felt exposed in a farmer’s market with so many people milling about, especially without a couple of his people standing guard. He had created a world of darkness, with many places to hide and conduct his illegal, but lucrative businesses. Being out in the open like this made him anxious, and he fingered the switchblade in his pocket like a child would a security blanket.

He almost lost it when he had to walk past a cop directing traffic at the entrance off the highway. Pressing his hand against the gun under his jacket, he hoped no one recognized him, because it would get ugly fast.

He’d returned to the United States fifty thousand dollars richer, leaving the safety of the Vega drug cartel in Mexico. He’d had his men looking for her for a long, long time with no luck. But her time and luck had run out, as he knew it would. She was his first priority, his mission.

He spotted a slender woman in a black tank top and a long, faded skirt pushing a baby in a stroller. She struggled to push the stroller on the bumpy surface of the field, the wheels periodically getting stuck. She’d stop, readjust, and then push on. Her focus was on the farmer’s products at each booth, not on the people surrounding her—not on him. Her mistake.

Soon she stopped to inspect a box of ripe red tomatoes in the back of a farmer’s pickup truck. Thin and sickly looking, she had dirty blond hair hanging down her back. If this was the woman he sought, she’d changed a lot in three years. Gone were the cornflower-blue streaks through her blond hair and the theatrical makeup she liked to wear, imitating her rock star idol of the moment.

In the next booth, he pretended to check out some mechanic tools on long wooden folding tables while she looked at homemade baby clothes under a canopy nearby. Careful to keep his space and not be noticed, he studied her and started to doubt himself. Was it really her, or was it wishful thinking on his part? He’d paid Diego a pound of meth for the information. If he’d been sent on a wild goose chase, he’d gut Diego like a deer in front of the others. Valuable lesson for all. No one messed with Juan Ortiz. No one.

He couldn’t keep his eyes off her, but he wasn’t absolutely certain she was the woman he’d been looking for. At least not yet. Pulling out a couple of dollar bills from her purse, she handed them to the merchant. She bent down to put the bag of tomatoes in the stroller, her tank riding up to expose a couple of inches of flesh. That’s when he saw the tattoo on her hip. It was a small circle with his initials inside. He branded all his bitches with it. It
was
Donda. The icing on the cake—the baby was with her.
His
kid.

Feeling an old fury rise, he struggled to keep it in check. Losing control in this public place would only work against him. In the worst-case scenario, it could get him caught. The FBI would get a good laugh out of that one. One of America’s most wanted captured in a backwoods farmer’s market.

Hell, if she recognized him she’d scream, and bring unwanted attention. No, he couldn’t make his move, at least not yet. Gritting his teeth, he watched her. Was she really so stupid to think she could run from him, and hide the fact she’d had his baby? Surely she’d had a clue about how important his possessions were to him. Those who stole from him went down in painfully creative ways. He’d made sure she witnessed several executions to keep her fearful and in line. He was incredulous when she escaped. He’d make her pay for it—with her life. Or maybe not. Death was instant. Making her suffer had more appeal.

Quietly, he shadowed her until she came to a booth with several baskets loaded with sweet corn. Parking the stroller, she moved under a canopy where an old woman handed her a plastic bag. Ignoring the baby, she sorted through the ears of corn, placing her selections in the bag.

He aimed his laser focus on the kid in the stroller, a little girl dressed in a soiled pink romper sucking on her two middle fingers, and staring at him with the same sparkling blue eyes his mother, Juanita, had. He blinked. It was uncanny how the kid had zeroed in on him, as if she recognized him. He flicked a picture of her with his cell phone.

An ear-piercing shriek shook his reverie, causing his body to jerk. He dropped his cell into his pocket and bumped against a man next to him, who shot him a what-the-hell glare and stepped away. Screaming and crying, his kid kicked her chubby, little legs and pointed directly at him, drawing the attention of shoppers in both booths. A woman nearby glanced at him accusingly, as if he’d done something to the child. A warning bell went off inside his head. Too much attention. Backing away, he shot out of the booth and disappeared in the crowd.

Dropping the ears of corn in her arms to the ground, Donda twisted her attention to the stroller where her baby screamed. It was a frightening sound and as she moved closer she saw the child hysterically pointing to a man in the next booth. He was tall with a slender build, and even though a ball cap covered most of his face, she recognized him. It was his eyes. His eyes were dead, dark, and evil. The monster was here. Brittle, jagged pieces of her personal nightmare sliced through her brain. Blood drained from her face and she trembled so hard she feared she’d collapse. Run! Why wouldn’t her legs move?

An older woman in the booth stared at her as she picked up the ears of corn from the ground. “Are you all right? You look like you’ve just seen a ghost.”

Sucking in a deep breath against the panic, she unbuckled her child from the stroller and kicked it aside. Hugging the little girl to her chest and dodging the other shoppers, she ran toward her car in the parking area, praying he would not be there waiting for them.

Juan reached his truck just in time to see Donda shove the kid inside an old Toyota before she jumped into the vehicle herself. Once she got the car started, she jammed the accelerator and flew out of the makeshift parking lot in the field, leaving a cloud of dust behind.