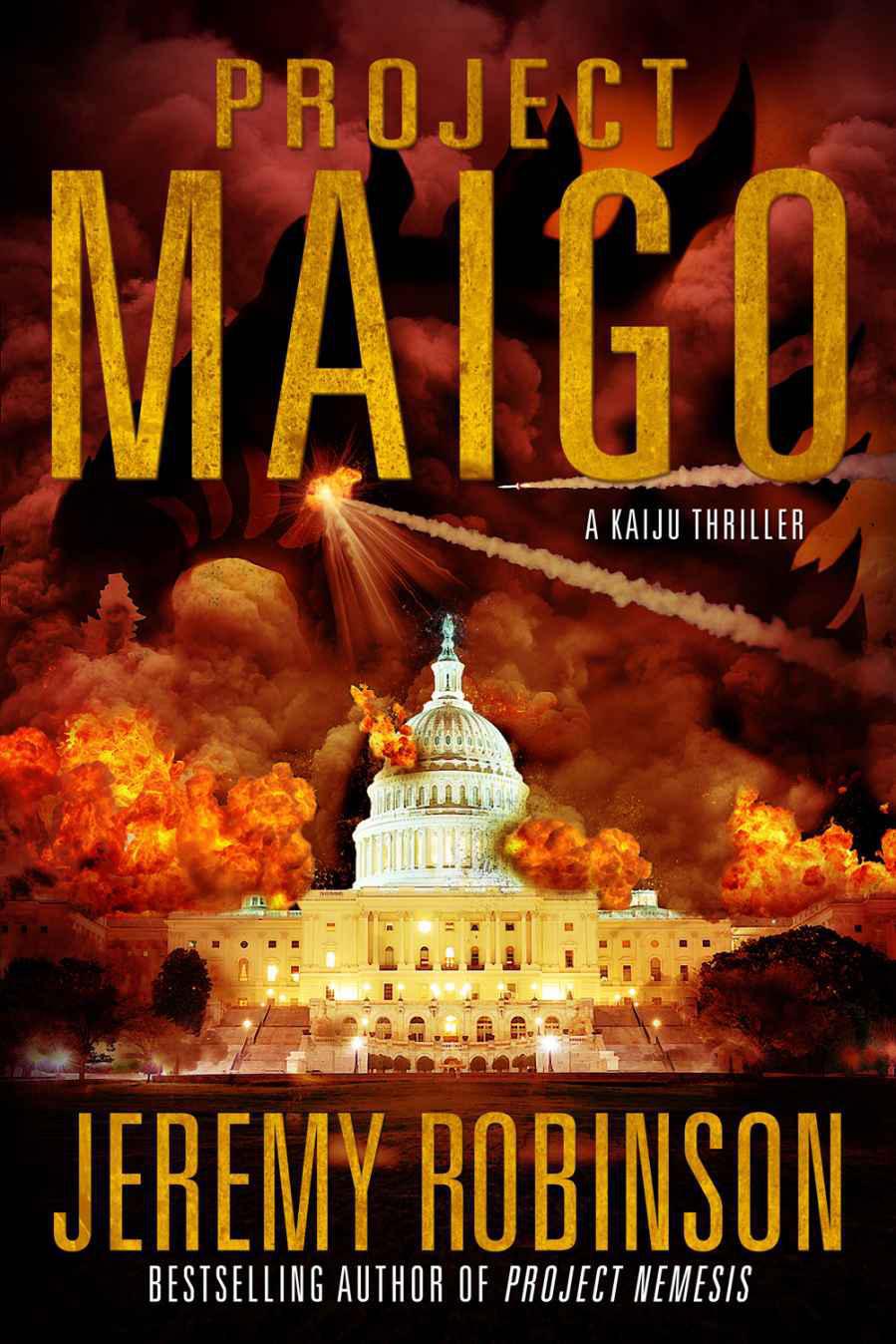 BOSTON IS IN RUINS

Jon Hudson, head of the Department of Homeland Security’s Fusion Center – Paranormal division, is haunted by Boston’s destruction at the hands of Nemesis, a three-hundred-foot tall monster with the heart of a murdered little girl, Maigo. In the time since Boston fell and Nemesis retreated to the ocean’s depths, Hudson has helped prepare the United States against future attacks. But no one is prepared for what rises from the depths.

Five Kaiju attack cities and consume the world’s citizens in an unstoppable rampage around the globe. But it soon becomes apparent that these attacks aren’t all random events. Hudson is targeted, putting the FC-P headquarters, known as the Crow’s Nest, and his team, in the very large crosshairs. General Lance Gordon, a man who carries Nemesis’s vengeful heart in his chest, directs the Kaiju, and when Hudson finds protection from an unlikely source, the General turns his attention to his next target.

THE NATION’S CAPITOL IS NEXT

While Gordon and his Kaiju storm toward Washington D.C., Hudson, along with his team and some new and unusual allies, race to stand in their path, hoping to spare the nation—and the world—from destruction. But salvation at the end of all things will come only through the gravest of sacrifices.

With
Project Nemesis
, Jeremy Robinson introduced the world of popular fiction to Kaiju, a word that has become popularized by the movie
Pacific Rim
, and is associated with classic movie monsters such as
Godzilla
and
Gamera
. In the year since the release of
Project Nemesis
, the book has become the bestselling original Kaiju novel of all time, and it is being featured in the video game
Colossal Kaiju Combat: Fall of Nemesis
. In
Project Maigo
, Robinson amps up the scale, the characters and the city-stomping action, treating readers to a truly monstrous experience typically reserved for the big screen. 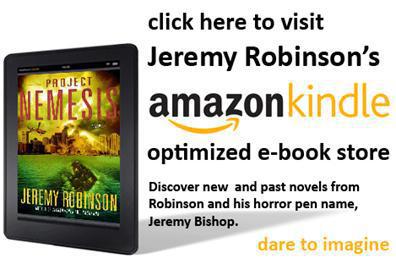 I must first thank the awesome Matt Frank, for his amazing creature designs. He has helped shape the look and feel of Nemesis and without him, I’m not sure the series would have got the traction that it did. With Project Maigo there is even more art from Matt and five brand new creature designs.

For supreme editing, big thanks to Kane Gilmour, who also prodded me into writing my dream Kaiju project. This book is not only better for your edits, but might not exist without your nudging. Thanks to Roger Brodeur for cleaning up the text and hiding my many typos.

Thank you to Simon Strange at Sunstone Games, for making Nemesis the boss character in the
Colossal Kaiju Combat
video game and for lending your support to the book. I very much look forward to kicking some Kaiju butt with Nemesis!

At the end of Project Maigo, you will find a fan art gallery, including more than twenty-five pieces of art. Thanks to everyone who submitted their work. None of my novels have inspired such a creative, talented response, and being an artist who grew up drawing Kaiju, I’m extremely grateful for it.

And as always, thanks to my amazing family. My wife, Hilaree, is my biggest supporter, and my three Kaiju, err, children...you continue to inspire me and keep my imagination rooted in my monster-loving childhood. I love you all.

For all you crazy Kaiju fans who made PROJECT NEMESIS a hit, and helped make PROJECT MAIGO a reality. Thank you for your support, and all the art!

“Somebody shut that bitch up.” The sound of flesh striking flesh followed the command, stifling the chained woman’s whimpers and reminding the others why they shouldn’t speak, cry or even breathe loudly.

Satisfied with the silence, the man known simply as Tinman crouched down to inspect the woman. He reached out a dirty hand, held her chin and yanked her face back and forth. She was hard to see in the dim multicolored light provided by the distant towers of Hong Kong. He snapped his fingers. “Flashlight.”

A light was flicked on and placed in his hand. The inside of the blue, 40-foot-long, steel shipping container lit up, revealing two rows of young women. Thirty-three in all. They were prisoners. Slaves. And yet, not one of them was bound. Not physically, at least.

The light shone into the eyes of the slapped woman. She didn’t blink. Her pupils remained dilated. She simply stared straight ahead, no longer afraid. No longer...anything. Tinman noted the red hand print emerging on the woman’s face. Dingle had struck her hard, but he had remembered not to use a closed fist, at least. Damaged goods fetched a lower price. And this one—a Japanese girl—would get good money from their Western patrons. “How long will they be...pliable? The auction starts in thirty minutes. Most of our guests are already here.”

“They’re pretty doped,” Dingle replied. He was a skinny man with greasy blond hair, shiny black leather garb and purple sunglasses—despite the late hour. He shook his hand, still recovering from the open-palm blow he’d given the woman. “But they’ll be able to walk, among other things.”

“Nothing happens on the premises,” Tinman reminded him. “We’re not a brothel. We’re an outlet. What they do with the product is their own business and on their own time.”

Dingle nodded. “I know the drill.”

Tinman knew Dingle was capable. They’d bought and sold more than two thousand women during their last three years together, and they had become the number one import/export outfit in the Asian flesh trade. Business had slowed after that mess in Boston, though. People had grown afraid. Some of his clients even attempted to return their merchandise. But the monster—Nemesis—hadn’t returned. And business was booming, or as Dingle liked to say, their ‘business was banging.’

Tinman sometimes told himself that some of the women were being used for more noble pursuits, like house cleaning or manual labor, but if he was honest, he knew the lucky ones found themselves locked inside a plush hideaway for a few years before being used up and discarded. The unlucky ones wouldn’t make it a week. Some might not even survive the night.

Not my problem
, he told himself.

He looked down the row of women, casting the bright white light along their faces. Most were Asian—Korean, Japanese, Vietnamese and Chinese. Most of them Chinese, on account of Chinese parents not putting up too much of a stink when the girls disappeared. Mom and dad might not appreciate them for being born female, but Tinman’s clients would.
At least
, Tinman thought,
some of them will feel desired before dying.
A few of the slaves were Western girls. A couple of sluts from California who practically volunteered. Two Germans. A French girl. And two Spanish—Mexican Spanish. While the Asian girls attracted Western clients, these Western girls would fetch top dollar with his Eastern clientele. Everyone always wanted what they perceived as exotic.

He crouched to the left, shining his light in the next girl’s eyes, seeing the same vacant look. Like this, mindless and oblivious to what was going to come, Tinman didn’t find the girls attractive. He thought the kind of men who did were...off. But they paid well enough for him not to care.

The girl had a bit of an overbite. He pulled a black marker from his pocket and placed a single dot on the back of her right hand, signifying that the bidding on her should start at a lower price. She’d be one of the unlucky ones. No one spent good money on a temp.

“Hey, Tin,” a man called from the container’s opening. Tinman turned to find his two guards silhouetted against the city lights. A stiff breeze brought the scent of smog and ocean decay to his nose. He hated Hong Kong. This was as close as he ever got. The docks. The auction and the exchange of money and girls would all happen on his freighter, which also conducted more legitimate, but less profitable business. When they were done, he’d sail away richer than when he arrived.

Tinman blew Hong Kong’s stink from his nose. “What is it?”

“They’re all here,” the guard reported.

Early
, Tinman thought with a grin. Early meant eager. Eager meant high bidding. He clapped his hands together and glanced up at Dingle. “I’ll inspect each girl before she’s made available.”

Dingle nodded. “Going to be a good night.”

“
Very
good,” Tinman shuffled to the left one more time, out of habit. He raised the flashlight to the girl’s face. One of the Americans. A blonde. Fit and slender, which was a hard sell in Asia, since they were accustomed to slender builds, but at least she wasn’t slender in the places that mattered, and her face... She was stunning.

She squinted at the light.

Tinman’s distracted mind registered all this too late to stop the foot rising for his crotch. The woman’s boot found the soft flesh between his legs and crushed it upwards, while the rest of him crumpled down. He was in a full fetal position by the time he hit the steel floor.

The sound of fighting at the far end of the crate answered his question. He tried to shout an order, but he hadn’t yet taken a breath.

Suddenly, the container tipped forward, then back, as a large wave passed beneath the ship. It didn’t feel big enough to worry about, but it was the kind of wave encountered on the high seas, not in port.

The descending crate knocked Dingle off balance. It was the opening the woman needed. She lunged forward, and with a speed and precision Tinman had never seen, she knocked the knife from Dingle’s hand. Before the blade struck the metal floor, she broke his wrist and punched his throat, dropping him hard.

A second wave struck. He could hear the dock’s moorings creaking under the strain.