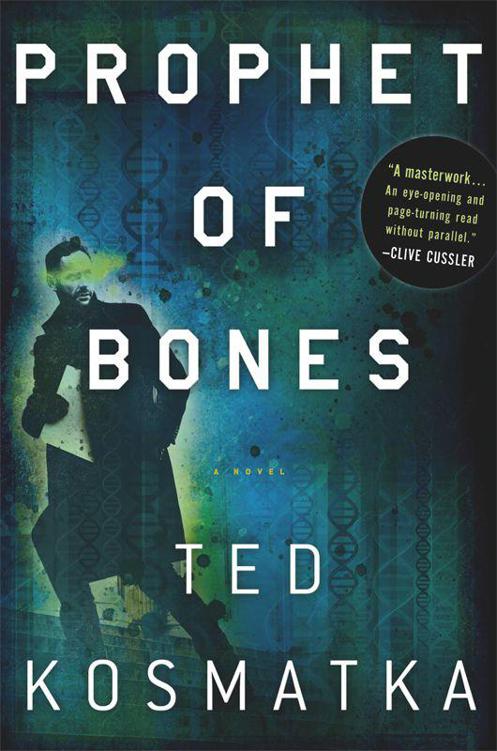 If this is the best of all possible worlds, what are the others like?

The Prophet set his nine-millimeter on the kitchen counter.

He leaned forward, bleeding hard into the sink, the only sound a rhythmic tap of blood on stainless steel. The blood struck in little dime-sized drops, bright red, gathering into a pool on the metallic surface. He hit the knob with the back of his hand and cold water swirled down the drain.

Behind him, feet crunched on spent shell casings as two men entered the room.

“My disciples,” the Prophet said. He did not turn. “I knew you’d find me here.”

But his disciples, for their part, remained silent. They pulled chairs out from the table and sat. They cocked their weapons. First one, then the other, making a point of it.

Somewhere in the house a TV blared daytime talk, or something like it—intermittent applause, and a deep male voice saying,
She a damn lie, that baby don’t look nothing like me,
and the crowd hooting and hollering its approval.

The Prophet splashed cold water on his face, trying to clear the blood from his eyes. Head wounds bled like a bitch. They always looked worse than they were.
Well, not always
, he thought. He remembered the guard at the lab and clenched his eyes shut, willing the image away. Sometimes head wounds were exactly as bad as they looked. Sometimes they fucking killed you.

The Prophet peeled loose his tattered white sweatshirt, revealing a torso lean, and dark, and scarred. Tattoos swarmed up both arms to his shoulders—gang symbols across his deltoids, a crucifix in the center of his chest. He wiped his face, and the shirt came away red. The Prophet was not a big man, but wiry muscle bunched and corded beneath his skin when he tossed his stained shirt across the room. He was twenty years old or a thousand, depending on who you asked. Who you believed.

The Prophet turned and regarded his faithful. A smile crept to his lips. “You look like you could use a beer.”

He walked to where the dead woman lay against the refrigerator. He kicked her body out of the way enough to open the door. Glass bottles clinked. “All they have is Miller,” he said, a kind of apology. Blood trailed across the yellow linoleum. Not his blood, he noted. Not this time. He carried three beers back to the table and collapsed into a chair.

His faithful did not smile. They did not reach for their beers. They sat in their dark suits and black sunglasses; they sat perfectly still and watched him. The first was young, blond, baby-faced. A white scar ran diagonally across his upper lip where a cleft lip had been surgically corrected in childhood. If anything, the scar made him more boyish. The one imperfection in an otherwise perfect face. He held his gun casually, arm resting on the table. His white shirt collar was open at the neck, black tie loosened. The second man was older, darker—all jaw, chin, and shoulders. The hired muscle of the pair. But Babyface was still the one to watch. The Prophet knew this at a glance.

“What’s your name?” he asked the blond.

“Does it matter?” the blond answered.

The Prophet shook his head. “I guess not.” Babyface was right after all. In heaven there would be no need for names, for all are known to the eyes of God.

“We’ve been looking for you for a long time, Manuel,” Babyface said.

The Prophet leaned back in his chair and took a long swig of beer. He spread his hands. “My followers,” he said. “You have found me.”

“You’ve cost a lot of money,” the blond continued. “Which is something our employer could forgive.” He took off his sunglasses and rubbed the bridge of his nose. He looked up, and his eyes were a bright baby blue. “But you’ve also caused a lot of trouble, which is something he cannot.”

“Then we’re agreed on the issue. None asked. None given.” The man’s pale eyes bore into him. He leaned across the table, pitching his voice low. “Tell me something, Manuel, just out of curiosity, between you and me, before this thing goes the way it’s gonna go—what the fuck were you thinking?”

The Prophet wiped a runnel of blood from his face. “I was called for this. You wouldn’t understand.”

“Oh, I suspect you got that right.”

The Prophet sipped his beer.

“So then where is it?” Babyface snapped, seeming to lose patience.

“Come on, Manuel. We came such a long way. Don’t give us the silent treatment now.” He tapped the muzzle of the gun on the table.

“Our most holy is resting.”

“Most holy?” Babyface laughed and shook his head. “You know, I thought that bullshit was a joke when they told me.” He turned to his partner. “You hear this shit?”

But the muscle only stared, jaw clenched tight. Babyface turned back around. “Or maybe this is all just some game you’re playing. Some elaborate con that didn’t work out the way you wanted. I heard you’re one to play games.”

“No game,” the Prophet said.

“So you believe it?”

“Then you’re out of your mind after all.”

The TV droned on, filling the silence, the deep male voice cohering again from out of the background noise—
I
told
you she was lying about it. I told you.

The Prophet lowered his eyes. “I laid him upstairs on the bed. It’s peaceful up there.”

Babyface nodded to his partner. The second man stood. “You don’t mind if we check, do you?” Babyface asked. The second man turned and disappeared up the stairs, taking them two at a time. His footfalls crossed heavily above them as he moved from room to room.

Babyface stared from across the table, his blue eyes deep and expressionless. The gun never wavered, held casually in a soft, pale hand.

The Prophet took another long pull from his beer. “I fed him every three hours, just like I was supposed to.”

“And did it matter?”

The Prophet didn’t respond. In the distance, the TV broke into applause again. Theme music, end of show. The footfalls crossed above them, slower this time, coming down the stairs. A moment later, the second man was back, carrying a dark form wrapped in a blanket. The bundle didn’t move.

The blond man flashed his muscle a questioning look.

The blond turned to him. “It’s not your fault, Manuel,” he said. “Most of them die in the first few weeks. Sometimes their mothers eat them.”

The Prophet smiled. “He will rise again.”

“Perhaps he will,” Babyface said. “But I’d like to see that trick.” He raised his gun.

The Prophet took a final, cool swallow, finishing his beer. Blood dripped from his forehead and fell to the stained Formica table. He glanced around the room and shook his head. He saw broken dishes, stained wooden cabinets, dirty yellow linoleum. He looked at the dead woman, resolute in her silence. “Nothing good will come of this,” he prophesied.

“That’s where you’re wrong,” the blond man said. He smiled, and the old surgical scar curled his lip slightly. “This part will make me feel a whole lot better.”

“Though you strike me down, there will be other prophets after me. I won’t be the last.”

The muscle placed the body on the table, and the blanket opened at one end. A small, dark arm swung free of the blanket—a tiny distorted hand. A hand not quite human.

“I’ve got a secret for you,” Babyface said. “God hates His prophets. Always has.”

“That’s blasphemy,” the blond man said. He lifted the gun to Manuel’s face. “God is capable of all things.”

He pulled the trigger.

Paul liked playing God in the attic above his family garage.

Paul built the cages out of discarded two-by-fours he’d found under the deck and quarter-inch mesh he bought from the local hardware store. He gathered small scraps of carpet, odds and ends of plywood, a bent metal bracket that used to belong to his mother’s old sewing machine table.

Paul drew the plans out carefully on graph paper during the last week of school.

Two weeks into summer break, his father left town to speak at a scientific conference. “Be good while I’m gone,” his father warned him as they stood in the foyer. “Keep studying your verses.”

Paul watched from the window as the long black car backed down the driveway.

Because he wasn’t old enough to use his father’s power tools, he had to use a handsaw to cut the wood for the cages. He used his mother’s sturdy black scissors to snip the wire mesh. He borrowed hinges from old cabinet doors, and nails from the rusty coffee can that hung over his father’s unused workbench.

That evening his mother heard the hammering and came out to the garage.

“What are you doing up there?” She spoke in careful English, peering up at the rectangle of light that spilled down from the attic.

Paul stuck his head through the opening, all spiky black hair and sawdust. “Nothing.”

“You’re doing something; I can hear you.”

“I’m just playing around with some tools,” he said. Which was, in some sense, true. He couldn’t lie to his mother. Not directly.

“Just a hammer and some nails.”

She stared up at him, her delicate face a broken Chinese doll—pieces of porcelain reglued subtly out of alignment.

“Be careful,” she said, and he understood that she was talking both about the tools and about his father.

The days turned into weeks as Paul worked on the cages. The summer wore on, Lake Michigan humidity cloaking the region like a veil. Because the wood was big, he built the cages big—less cutting that way. The cages were enormous, overengineered structures, ridiculously outsized for the animals they’d be holding. They weren’t mouse cages so much as mouse cities—huge tabletop-sized enclosures that could have housed border collies. He spent most of his paper-route money on the project, buying odds and ends he needed: sheets of Plexiglas, plastic water bottles, and small dowels of wood he used for door latches. While the other children in the neighborhood played basketball or
wittedandu
, Paul worked on his project.

The Society of Secret Cats by Kenyon, De
Efecto Mariposa by Aurora Seldon e Isla Marín
Rain Dance by Terri Farley
All I Want For Christmas by Ann Roth
How to Cook Like a Man by Daniel Duane
The Lion Seeker by Kenneth Bonert
The Last Target by Christy Barritt
Quest for the Sun Orb by Laura Jo Phillips
The Sacred Lies of Minnow Bly by Stephanie Oakes
Songbird by Victoria Escobar
Our partner