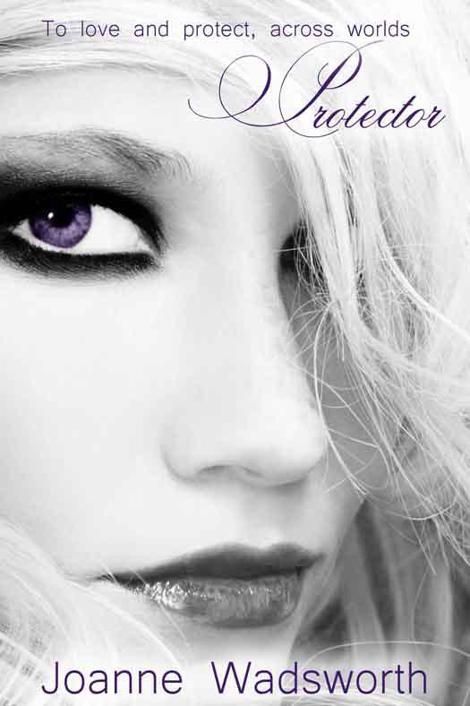 Thank you for purchasing this Lyrical Press book

To love and protect…across worlds.

Eighteen-year-old Faith Stryker is prepared to leap out into the unknown world beyond her home shores of New Zealand to experience life. Only she never expected to encounter Magio, a planet with two warring countries, where its people reach adulthood at eighteen by coming into their strength and prophetic abilities. Only after Faith discovers she’s a Halfling–thanks to her warrior father she’s never met–does her own skill of forethought develop.

Peacio’s Prince Davio Loveria is sent to the young Faith Stryker by his grandfather, but not all goes as planned. Davio discovers Faith isn’t just a Halfling, she’s also his soul-bound mate–an intense relationship he cannot, nor will not, give up.

With two wars now waging…one of land and the other of the heart…can the young lovers find their place in the world?

Spellbound, my mind spun with sudden lust-filled fantasies. His hair held a slight wave and was that teasing shade in between dark blond and brown, the longer length just sweeping his shoulders. His eyes were to die for, their liquid brown speckled with gold.

He wore a white t-shirt over broad shoulders and blue jeans that skimmed his hips, the ends tucked carelessly into a pair of black ankle-high boots with thick silver buckles.

Oh, he stared at me in return, the fire in his eyes setting a glow to the golden flecks and lighting them brilliantly. In that one second, this stranger disarmed me, his hot gaze running up and down my body.

Hold on. I jerked my head back. Was he checking me out?

I turned to see who sat behind me, thinking it must be someone else, when Belle nudged my arm. “That’s Davio Loveria–the king’s grandson. His presence has that impact on nearly everyone.”

What? Stunned disbelief as my jaw dropped.

Did Belle just say that man, that new male student was the king’s grandson?

From the fictional country of Peacio?

eBooks are not transferable. All Rights Reserved. This book may not be reproduced, transmitted, or stored in whole or in part by any means, including graphic, electronic, or mechanical without the express written consent of the publisher except in the case of brief quotations embodied in critical articles and reviews.

This book is a work of fiction. The names, characters, places, and incidents are products of the writer’s imagination or have been used fictitiously and are not to be construed as real. Any resemblance to persons, living or dead, actual events, locale or organizations is entirely coincidental. The publisher does not have any control over and does not assume any responsibility for author or third-party Web sites or their content.

For my hubby, who cooks dinner while I write and brings home my favorite chocolate.

My greatest thanks go to my publisher, Renee Rocco, and the best editor on the planet, Abby Rose. Thank you for saying yes and fulfilling my dream. Abby, you’ve encouraged me all the way, giving me the best guidance and support. What you’ve done means the world to me.

To my sister, Karen, your critiquing was awesome, and I’m definitely keeping you on. To my hubby, Jason, and kiddies, Marisa, Caleb, Cruise and Rocco–I love you all, and we’ll keep working on not knocking on Mum’s office door.

For my readers, from the depths of my heart, I thank you for joining me, where imagination and magic soar.

Hugs to you all.

Silvie Carver snapped her fingers and bobbed her head of fiery red-gold curls in front of me. I slowly focused on her, dreading my instinctive first thought as I shook my head forcefully. “Oh no, don’t you dare even think it, Silvie. No. Don’t think it and don’t say it. We’re in class and there are other students–”

Only I knew what she was going to say next, because I knew my best friend like no other. She inhaled sharply. “Faith, it’s gotta be said. You need to get laid. You need someone fun to…well, you know what.”

I bowed my head and dropped it uselessly into my cupped palms. Because there it was–Silvie’s answer to the fact we were both now eighteen and still completely single.

I lifted my head, staring her down. “Did you not hear me say we were in class, Silvie? Your timing for that analysis completely sucks. Besides, we should be studying for our end of year exams. A boyfriend comes after exams, one wise thought which should most definitely apply to you.”

With concern, I glanced around the usual faces in our classroom. Yeah, it was as I thought. I was the current spectacle because unfortunately for me, Silvie’s voice could carry just as blisteringly hot as her stunning, wildfire red hair.

I shot a narrowed glare at one of our fellow male students who was riveted on our conversation and giving me the worst slumberous wink I’d ever seen. “She wasn’t meaning I should have sex with you, Caleb Stiles. Now look the other way.” Then I directed my hostile stare at Silvie. “You, Silvie Carver, better sit down before I knock you down. I can’t believe you just said that…no, actually I can–only it’s beyond my reasoning why I always put up with you and your big mouth.”

She only laughed as she shamelessly scraped one of the blue-gray metal school chairs around next to mine. She plopped herself down on it, dropping her English books, refill pad and pen in front of her onto the desk. Next, she stretched her legs out as far as she could and crossed them idly at her ankles. “Well, this conversation isn’t over. I’m sure Belle would agree.”

“Don’t you dare bring Belle into this.” My voice was low and controlled, even as I watched Silvie casually twirl her blue pen in mid-air around her first three fingers.

Her aeronautical pen trick always captivated me. But not right now. Because right now, I was more than peeved. I’d had the worst week ever since my eighteenth birthday. I mean the–Worst. Week. Ever. No one should have to live through the tribulations I’d just experienced, and was still experiencing, no thanks to Belle Benner still being in town.

Silvie wagged one brow as her gaze rose over my shoulder. “Too late, Faith. Belle’s here. She and I have been talking.”

Belle pulled out her school chair, taking the position on the other side of me, her dark locks settling with stunning abandon about her tiny waist as she twirled around and sat. She did everything with such finesse. Even the simple act of her sitting was like watching a moving piece of art. So moving, I had quizzed her about being a ballerina. She just had this way about every precise movement she made. Dainty and delicate.

“So what were you two talking about? I didn’t have my ears tuned precisely in,” Belle said as she tossed her pad and pen with an artful glide onto her desk. Her slim fingers came around and smoothed her silky mass of dark hair behind one ear.

I snapped my fingers, finally pinpointing exactly who Belle looked like. It was that young star female lead off High School Musical. The one who got the basketball guy and sang and danced with him.

Focus, Faith. I asked what you two were talking about. I didn’t have my hearing turned up.

There Belle went again with that telepathic skill of hers, speaking mind to mind, always trying to draw me into her mysterious world. I sighed and gave in since she knew I would’ve heard her.
Silvie thinks I should get laid.
I pushed the words along our newly formed telepathic link, the crazy link we’d created on the night of my eighteenth birthday. We’d been speaking privately like this for the past few days, something Belle called a strength skill, but something I called plain crazy.

So crazy I felt like I lived one of those science fiction and fantasy movies in real time.

Only she seemed to have more insight than me into this odd, spinning frenzy that had become my life these past seven mind-boggling days. She insisted my skills came from the same place as hers and that place was another planet in this universe–one named after their timeless skills–one she referred to as Magio.

I can feel your resistance. We are from Magio. I’ve told you this over and over since we first connected last week. I’m an empath and can feel your emotions.

I sent her a very long eye roll.
I heard you say so the last one-hundred times. It doesn’t mean I have to believe you. My mother doesn’t have any of the skills I’ve been developing since my birthday. So there simply can’t be an alternate planet called Magio. Believe me, I’ve been scouring the NASA website for any link on this mysterious planet you’ve been spouting nonsense about. There’s nothing. Nada. Zilch. Nilch. Got that or do we speak a separate language as well?

She gave me her own dark eye roll back.
Obviously, you won’t find anything about Magio on the NASA website. Get real. If such a thing happened, the powers that be on Earth would no doubt try to bomb us to smithereens. We live a simple existence, like that of your people hundreds of years ago. We don’t harbor advanced technology as you do.

Quite frankly, I’d had enough of her talk about this other planet and this other country called Peacio. My mother was human. I was human. In fact, for eighteen years I’d been just a regular–or as regular as I could get–New Zealand girl. It was Belle who was the problem. I’d only known her for three short, unnerving months. I couldn’t shake her and, on top of that, I had no answer for this telepathy and other unmentionables.

Right, let’s agree to disagree on this subject.
I was getting a headache, just as I always did around her.

Silvie nudged my arm from the other side, winking while a sassy grin tugged at her lips. “Are you two talking privately again? That mind thingy-majigimy you two do?”

“Yes, and it’s about Peacio again.” I pursed my lips, frowning. “You’ve seen those paranormal programs, haven’t you? It’s not uncommon for some of those weird beasties to speak mind to mind. That’s all this is about. I don’t believe there’s another planet like Earth out there.” And I didn’t believe I was a weird beastie either, just a weird human being it seemed.

She chuckled and sighed almost dreamily. “You two are so funny. I only wish I could do what you do.”

Sheesh. I slapped my forehead, dropping my chin. She definitely needed a mind transplant. No one I knew would want to be this different this early on in life. I sat between two crazy people. I shook my head, staring at my scratched up desktop.

The Journey by John Marsden
A Bit of Earth by Rebecca Smith
Forever Viper by Sammie J
Weird Sister by Kate Pullinger
Beyond My Control: Forbidden Fantasies in an Uncensored Age by Nancy Friday
The Legacy of Lehr by Katherine Kurtz
Coming Home (Free Fleet Book 2) by Michael Chatfield
First Kill by Jennifer Fallon
Mirror in the Sky by Aditi Khorana
Ride It Out by Lowe, Aden, Wheels, Ashley
Our partner