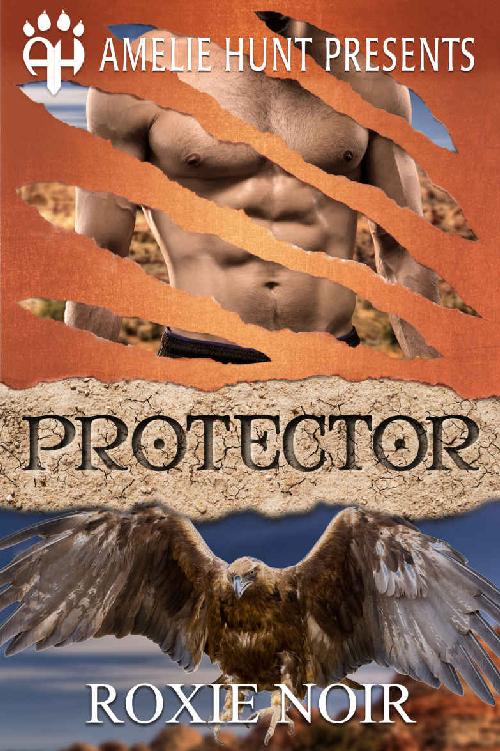 This book is intended for audiences 18 and over only.

Or turn the page for a sneak peek at Grizzlies & Glaciers, a bear shifter romance...

and get all of Amelie Hunt’s freshest releases first! Don’t forget to check out our website and add us on Facebook.

Garrett wished he’d written the address down. He could have
sworn
it was 1714 West Main Street, but apparently not, because the numbers on the stores skipped from 1712 to 1716.

Just in case, he went all the way to the intersection of Main and 6
th
, then glared across the street at the 1800 block.

This is because you left your phone at home
, he thought.
You’re just being paranoid. No one’s watching you, and they’re sure as hell not tracking you with your phone
.

He jammed his hands into the pockets of his jeans and decided to retrace his steps
one
more time before he gave up and went back to his apartment. He walked quickly, watching the numbers count down. 1728, 1726.

But what if they really are watching?
he thought.

Logically, he knew it was crazy. He knew he was just looking into a car crash that had happened
years
before and driving himself nuts with the what-if questions.

But lately, he hadn’t been able to shake that
feeling
, that prickle that someone was
watching
him. He’d be sitting alone in his apartment and suddenly feel eyes on the back of his neck. His computer screen would blink for a split second.

He’d go to the grocery store and see someone he could
swear
he’d seen before, but he didn’t know where.

If someone’s watching me, I don’t want them knowing what I’m doing right now
, he thought.
At least I haven’t gone completely over the edge and started wearing tinfoil hats.

He watched the numbers on the shops.

I haven’t started wearing them yet, anyway,
he thought.

Garrett stopped and glared, then looked around very, very carefully. 1716 was a candy shop that claimed, in big letters painted on its glass windows, to have the best fudge in Grand Junction, Colorado.

1712 was a small women’s clothing boutique that looked like it specialized in flowy, tie-dyed garments.

Neither of them were the private investigator’s office he was looking for.

Garrett stood and glared, folding his arms over his chest.

Maybe his website was a fake
, he thought.
Just to get me to give up some of my information so they can find out where I am
.

Then, he finally spotted a small notecard propped up underneath a mannequin.

Garrett followed the small, handwritten arrow to a narrow alley that ran between two buildings. In the alley, at last, was the frosted glass door he’d been searching for.

Shouldn’t this be 1716 and the boutique should be 1714?
Garrett thought, but he pushed the door open and mounted the creaky wooden stairs, trying not to stomp too much.

At the top was another frosted glass door with the same thing written on it.

You could turn back,
Garrett thought.
You’ve got one last chance not to involve someone else and just let this die here.

Inside, he could hear a woman’s voice laughing, a bubbly, melodious voice. Something about it
gripped
him, calling to him even through the thick glass.

He opened the door, and blinked.

He wasn’t sure what he’d been expecting from a private investigator’s office — dark, cramped, and smoky, maybe? —

but it wasn’t
this
, a sun-drenched room with plants in the window and sleek, modern office furniture.

Not to
mention
the girl standing behind the desk, her back to Garrett, talking on the phone.

She had one hand on her hip, staring at a large, blank whiteboard, and Garrett paused for a moment, just staring at her silhouette.

It was
killer
, almost like she’d stepped out of a noir movie: small waist and lush hips, a long neck leading up to a low bun.

Then she turned to look at him, and his mouth went dry.

She was even prettier than she sounded.

She had long black hair pulled into a bun, skin the color of dulce de leche, and deep brown eyes that gave him a long, searching look, taking Garrett in from head to toe.

He wished he’d worn a pair of jeans without holes in the knees.

She
, on the other hand, wore no-nonsense black pants and a button down white shirt that fit the curves of her body
perfectly,
nipping in at her narrow waist and following the line of her perfect ass.

As if to compromise, she turned and faced the wall, giving Garrett the side view, still listening to the phone.

He forced himself not to tilt his head as he followed the perfect curve of her ass with his eyes, practically able to feel it underneath his hands.

Maybe Elliott is running late
, he thought, looking at the wide, clean desk.
I wonder if she’s ever gotten up to any fun on that desk, you know, between clients—

“Yes, Mrs. Smith. I’ll let you know of any developments with your case as soon as possible.”

She paused for a moment, making eye contact with Garrett. He stepped inside and let the door close, finally.

“Thank you very much, Mrs. Smith. I’ll talk to you soon.”

The person on the other end was still talking as the girl put the phone down and turned her full attention to Garrett.

“Sorry about that,” she said, walking around the huge desk.

Garrett was nearly mesmerized by the swing of her hips, the way they moved beneath the black fabric, like her body was
begging
him to touch it.

“Not a problem,” he said, still ogling. “Is Elliott Velasquez in?”

She stopped in front of him and held out one hand authoritatively. Garrett guessed that he was nearly a foot taller than her, but she locked eyes with him as he took her hand, her gaze bold and unafraid.

“I’m Elliott Velasquez,” she said. “You can call me Ellie.”

Garrett raised one eyebrow and took her hand in his, squeezing it.

“You don’t look like a private investigator,” he said.

“You don’t look like a femme fatale, but here you are, bringing trouble to my door,” she said, and then smiled politely.

She squeezed his hand back. The handshake was surprisingly strong, and something deep inside Garrett
growled
in response.

“What makes you think I brought trouble?” he asked.

He didn’t let her hand go. Not yet.

“Why, are you here to tell me I’ve won a million dollars?” she asked. “I don’t see the giant check anywhere.”

Garrett watched her lips as she spoke. They were full and plump and a dusky rose color, and he fought not to bend down and kiss them.

“It might be a regular sized check,” he said. He could feel a smile forming on his lips, despite himself. “Today could be your
lucky
day.”

Finally he let her hand go, but Ellie didn’t move back.

“You ever heard the phrase, ‘One man’s luck is another man’s misfortune’?” she asked.

“Feel free to prove me wrong by handing me a check any moment now,” Ellie said. She crossed her arms again, but her eyes were sparkling.

Forget the car crash
, he thought.
How do I get her on that desk?

“
Now
you sound like a private investigator,” Garrett said.

“I ought to start smoking, drinking whiskey, and chasing skirts all day,” she said, walking back around the desk. Garrett watched her ass as it moved from side to side.

“Maybe then I’d seem more like a PI,” Ellie said.

She waved a hand at a tasteful leather chair in front of her desk, and Garrett dropped into it.

Quit staring at her and tell her your problem
, he thought.
You’re terrible at flirting.

“You’re Garrett with no last name whose IP address was routed through Bangkok, right?” she asked, looking at the computer screen.

Good,
he thought.
She traced my IP
.

He just nodded, folding his hands in his lap.

“Well, Garrett No Last Name,” she said, leaning forward, elbows on the desk. “What brings you all the way from Thailand?”

Garrett rubbed his hands together, then leaned forward, his elbows on his knees.

He took a deep breath. What he was about to tell Elliott he’d
never
told anyone before. Not out loud, anyway.

“I think my parents were murdered,” he said.

Elliott stared at him for a moment, tapping one finger on the desk.

“That’s a matter for the police,” she finally said, and shook her head. “I don’t do murder cases.”

“You just
think
they were murdered?”

“Yeah,” he said, and looked at his hands.

This sounds crazy when you say it out loud
, he thought.
Don’t just barrel in with an opener like that, you have to explain things first—

“Have you filed a missing persons report?” she asked, her voice gentler this time.

Garrett ran one hand through his shaggy, chin-length hair, then shook his head.

“I started at the wrong place,” he said.

“Mind re-starting at the right one?” Ellie said.

“My parents died fifteen years ago,” he said. “They drove off a cliff in a rain storm coming home when I was fifteen. It got ruled an accident, for obvious reasons.”

Garrett waved it away with a shrug.
I’m sorry
had to be the most useless phrase in the English language, or at least it was up there.

He
hated
having to tell people about his parents, because the moment he did, he could practically feel himself shrinking from
adult man
to
orphaned teenager
, and he never wanted to feel like
that
again.

So, he usually avoided it at all costs. But right now, it was actually crucial.

“The police never investigated it,” he said.

“Did they have a reason?” Ellie asked. “Not to be cruel, but it’s not that strange for someone to drive off a cliff in a rainstorm.”

You’re telling it wrong again
, Garrett thought.
Stop skipping ahead and just tell her everything
.

He’d been at home with his two brothers: Seth, two years older, and Zach, two years younger, in the tiny town of Obsidian, Utah. Smack dab in the middle of
nowhere
.

His parents had driven two hours to Blanding, the closest town with a real grocery store, to do some errands. The fastest road was Piñon Gulch Road, a small, narrow, winding gravel track through the mountains, but they drove it all the time. They could have driven that road in their
sleep
.