PU-239 and Other Russian Fantasies 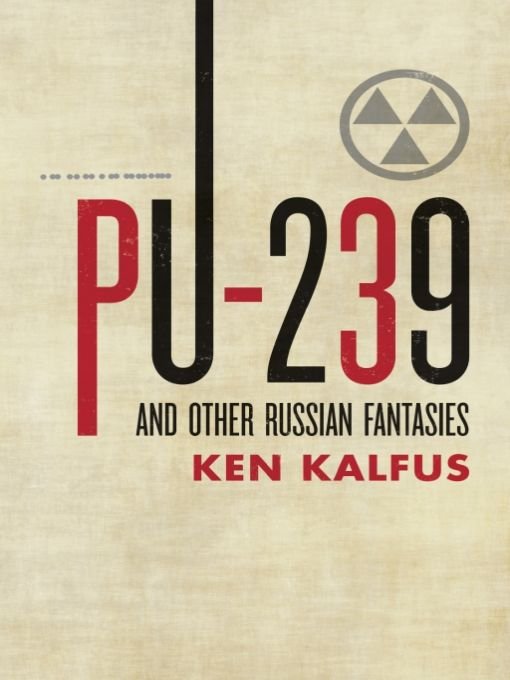 Table of Contents
Praise
Title Page
Dedication
STORIES
Pu-239
Anzhelika, 13
Birobidzhan
One
Two
Three
Four
Five
Six
Orbit
Budyonnovsk
Telephone
Cigarettes
Laziness
Missing
G-7
Sleepwalker
Mondays
Vsevolod Vsevolodovich
Transaction
Kitchen
The Abortions
Nine
Waiting List
Ira
Salt
NOVELLA
Peredelkino
One
Two
Three
Four
Five
Six
Seven
Eight
Nine
Ten
Eleven
Twelve
Thirteen
Fourteen
Also available from Milkweed Editions
Copyright Page
Praise for
Pu-239 and Other Russian Fantasies
“Kalfus is a virtuoso of the dismal comedy of Soviet life—the dull, brute clatter surrounding the soundless vacuum—and its social, environmental and spiritual self-destruction.”
—New York Times Book Review
“So full of pleasure and wonder from sentence to sentence and page to page that it touches the reader physically.”
—San Francisco Chronicle
“It starts with a nuclear accident and ends with a low-watt hoodlum snorting lines of plutonium. Kalfus populates
Pu-239
with the gods and monsters of the decomposing Soviet Union.”
—Esquire
“Kalfus is a writer who has the ability and the perverse desire to render fiction unfamiliar, difficult, and therefore new. One is often reminded of Kafka—another writer whose work’s vitality derives from its essential strangeness.”
—San Diego Union Tribune
“Kalfus is that rare writer of fiction whose passages of description feel like action; it’s as if he were injecting his readers with a serum that renders them, in a rush, intimately familiar with the texture of the Russian experience.”
—Salon
“There is, among us, a storyteller—how a rare a gift this is!”
—Boston Book Review
“In story after story Kalfus moves from a sense of disorientation to moments of paralyzing lucidity.”
—Minneapolis Star Tribune
“Kalfus shows a striking talent for transcultural understanding, and for depicting the very strange.”
—Publishers Weekly
Praise for
Thirst
“
Thirst
is a book to give to people who piss and moan about the unpromising future of American fiction. It’s the most exciting story collection since George Saunders’
CivilWarLand in Bad Decline;
and Ken Kalfus is an important writer in every sense of ‘important.’ There are hip, funny writers, and there are smart, technically innovative writers, and there are wise, moving, and profound writers. Kalfus is all these at once, and the stories in
Thirst
manage simultaneously to delight, impress, provoke, and redeem. Three cheers and then some.”
—David Foster Wallace
“These stories are genuinely magical, that is, the transformations they work are real, not illusions.
Thirst
is a collection steeped in wonder.”
—Stuart Dybek
“One of the most potent debut books of this year.”
—Village Voice
“Ken Kalfus reminds us that the short story is not an easily contained form, a single thing done in a single way.... The displaced figures in
Thirst
drift through worlds that are at once astonishing and familiar.”
—New York Times Book Review
“It’s exhilarating to discover a young writer with so much range and so little self-consciousness about exploring it. The publication of
Thirst
marks the debut of a major talent.”
—Salon
“
Thirst
is a tense, driving narrative that may put some readers in mind of Hemingway’s best short fiction.”
—Washington Post
“Slyly subversive ... Kalfus unerringly recognizes the comedy inherent in our quandaries of knowing and being, and suggests that laughter best quenches existential thirst.”
—Philadelphia Inquirer
“Kalfus himself is more shaman than politician—even when his stories rub up against geopolitical borders, he takes to the spiritual and dissolves them into magic. In this beautiful, varied volume of 14 stories and ‘routines,’ the well-traveled author launches himself far afield to tell his tales.”
—Newsday
“His debut story collection,
Thirst,
eludes all attempts at categorization save this one: It’s the bravest and most accomplished first book I’ve read all year. Each of the 14 stories in
Thirst
feels focused, pared down to its pure essences.”
—Daily Herald
“An intelligent and playful collection of stories that will move readers by engaging their sense of wonder and joy of exploration.”
—Boston Book Review
“
Thirst
deftly explores a range of issues—from sexual desire and sleep disorders to the theatrical preparations for a drug trial. The 14 stories are comic, surreal, dark, nostalgic and uniformly excellent. ... Kalfus creates a compelling momentum that leaves both Nula and the reader on the verge of a trance. ... Let me be the first to suggest that Major League Baseball hire Ken Kalfus to concoct possible answers to all their lingering questions, both real and imagined. I’ll happily buy his answers.”
—Sunday Oregonian
“Kalfus is as playful as postmodern masters Barthelme and Barth. Stories like ‘The Weather in New York’ are zingy with metafictional mayhem. Hilarious.”
—St. Petersburg Times
“Playful, moving short stories about travel, childhood and loss, from a writer who does almost everything well. The story collection of the year. Really.”
—Paper Magazine
ALSO BY KEN KALFUS
A Disorder Peculiar to the Country
The Commissariat of Enlightenment
Thirst 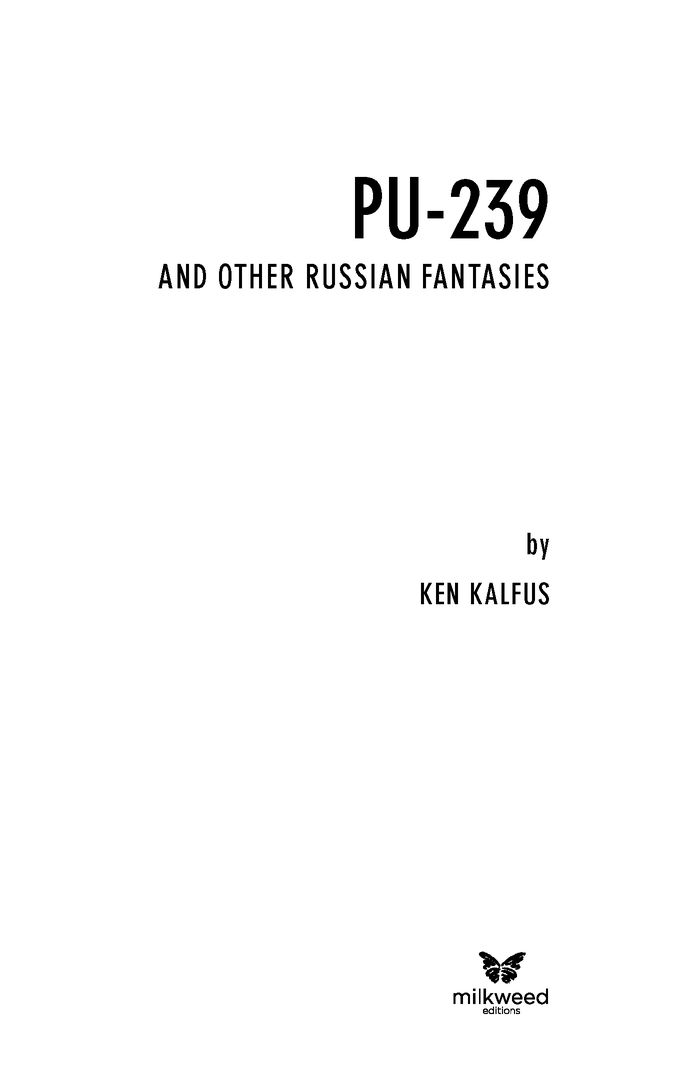 For Sky
STORIES
Pu-239
Pu-239
Someone committed a simple error that, according to the plant’s blueprints, should have been impossible, and a valve was left open, a pipe ruptured, a technician was trapped in a crawlspace, and a small fire destroyed several workstations. At first the alarm was discounted: false alarms commonly rang and flashed through the plant like birds in a tropical rain forest. Once the seriousness of the accident was appreciated, the rescue crew discovered that a soft drink dispenser waiting to be sent out for repair blocked the room in which the radiation suits were kept. After moving it and entering the storage room, they learned that several of the oxygen tanks had been left uncharged. By the time they reached the lab the fire was nearly out, but smoke laced with elements from the actinide series filled the unit. Lying on his back above the ceiling, staring at the wormlike pattern of surface corrosion on the tin duct a few centimeters from his face, Timofey had inhaled the fumes for an hour and forty minutes. In that time he had tried to imagine that he was inhaling dollar bills and that once they lodged in his lungs and bone marrow they would bombard his body tissue with high-energy dimes, nickels, and quarters.
Timofey had worked in 16 nearly his entire adult life, entrusted with the bounteous, transfiguring secrets of the atom. For most of that life, he had been exhilarated
by the reactor’s song of nuclear fission, the hiss of particle capture and loss. Highly valued for his ingenuity, Timofey carried in his head not only a detailed knowledge of the plant’s design, but also a precise recollection of its every repair and improvised alteration. He knew where the patches were and how well they had been executed. He knew which stated tolerances could be exceeded and by how much, which gauges ran hot, which ran slow, and which could be completely ignored. The plant managers and scientists were often forced to defer to his judgment. On these occasions a glitter of derision showed in his voice, as he tapped a finger significantly against a sheet of engineering designs and explained why there was only a single correct answer to the question.
After Timofey’s death, his colleagues recalled a dressing down he had received a few years earlier at the hands of a visiting scientist. No one remembered the details, except that she had proposed slightly altering the reaction process in order to produce a somewhat greater quantity of a certain isotope that she employed in her own research. Hovering in his stained and wrinkled white coat behind the half dozen plant officials whom she had been addressing, Timofey objected to the proposal. He said that greater quantities of the isotope would not be produced in the way she suggested and, in fact, could not be produced at all, according to well established principles of nuclear physics. Blood rushed to the woman’s square, fleshy, bulldog face. “Idiot!” she spat. “I’m Nuclear Section Secretary of the Academy of Sciences. I fucking
own
the established principles of nuclear physics. You’re a
technician!”
Those who were there recalled that Timofey tried to stand his
ground, but as he began to explain the flaw in her reasoning his voice lost its resonance and he began to mumble, straying away from the main point. She cut him off, asking her audience, “Are there any other questions, any educated questions?” As it turned out, neither Timofey nor the scientist was ever proved right. The Defense Ministry rejected the proposal for reasons of economy.
Timofey’s relations with his coworkers were more comfortable, if distant, and he usually joined the others in his unit at lunch in the plant’s low-ceilinged, windowless buffet. The room rustled with murmured complaint. Timofey could hardly be counted among the most embittered of the technical workers—a point sagely observed later. All joked with stale irony about the lapses in safety and the precipitous decline in their salaries caused by inflation; these comments had become almost entirely humorless three months earlier, when management followed a flurry of assuring memos, beseeching directives, and unambiguous promises with a failure to pay them at all. No one had been paid since.
Every afternoon at four Timofey fled the compromises and incompetence of his workplace in an old Zhiguli that he had purchased precisely so that he could arrive home a half hour earlier than if he had taken the tram. Against the odds set by personality and circumstance, he had married, late in his fourth decade, an electrical engineer assigned to another unit. Now, with the attentiveness he had once offered the reactor, Timofey often sat across the kitchen table from his wife with his head cocked, listening to their spindly, asthmatic eight-year-old son, Tolya, in the next room give ruinous commands to his toy soldiers. A
serious respiratory ailment similar to the boy’s kept Marina from working; disability leave had brought a pretty bloom to her soft cheeks.

Still William by Richmal Crompton
a movie...and a Book by Daniel Wagner
Stuart Little by E. B. White, Garth Williams
CallingCaralisa by Virginia Nelson
A Special Summer (Love Conquers All) by Wells, Victoria
Never, Never by Brianna Shrum
A Painted Goddess by Victor Gischler
Where by Kit Reed
Randall #02 - Ghost Writers in the Sky by Anne R. Allen
Such A Long Journey by Rohinton Mistry
Our partner