Read Pulled to the Dark (The Siriena Series) Online

Pulled to the Dark (The Siriena Series) 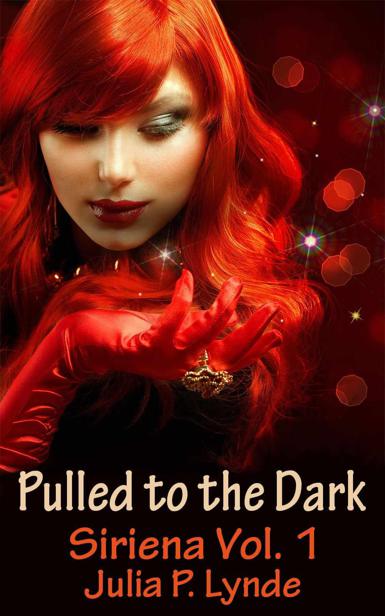 Pulled to the Dark

At first I couldn't see, either.

I heard a voice, a woman's voice. She was humming and speaking words in a language I didn't recognize. Then, slowly, I could see.

She had long, raven black hair. It was brushed away from her right ear and hung over her left shoulder, dangling down between us.
She was dressed in a bright red silk blouse and black skirt.
She had slight features and bright green eyes. I judged her slightly older than my twenty-eight years.

She was perhaps the most beautiful woman I'd ever seen.

I stared into her eyes. I opened my mouth to speak, but no words came forth. "Where am I," I wanted to ask. "Who are you? What are you doing to me?"

She lifted her hand and placed it over my lips. Still, she smiled, speaking those words, her beautiful green eyes staring into mine.

She lifted her fingers from my mouth. They were long and delicate. Then
I felt her stroke my sides with those same fingers, long, delicate strokes. I realized I was undressed, lying on my back with this woman staring down at me, still speaking her magic words.

I woke with a start, but one word hung in my ears.

Chelsea, my cat, was sitting on my chest, staring down at me, purring. My legs were tangled in the covers, and one arm, thrown over my head, had fallen asleep. Dervish, my other cat, was draped over the other
arm
.

"You stupid cats," I told them. "You're giving Mommy weird dreams." I struggled to roll over, dislodging two now indignant felines, and looked at the clock. The alarm was scheduled for ten more minutes. I sighed, unwrapped myself from my bed covers, and sat up, silencing the alarm before it could startle me with its insistent nagging.

I massaged my arm as the blood began to properly flow again, attacking me with pins and needles. "Stupid cat," I said, looki
ng at Dervish. He blinked at me
then stretched.

I climbed out of bed and wandered blurrily into the kitchen. I hit start on the coffee maker and set food down for the now insistent cats. Whose idea was it to get cats, anyway? Oh yeah, mine.

I wandered back down the hall and stepped into the shower. I stood under the water, thinking about the dream. Memory of it started to fade, but I couldn't stop thinking about a pair of beautiful green eyes.

I stood under the water for far too long, still groggy from sleep, then eventually turned the water from warm and wonderful to cold and wake-me-up-right-now. Thoughts of green eyes and the ghost of delicate fingers caressing my sides fled, replaced by excitement of a new day.

It was Monday, and I was starting a new job today! I was going to work for
Renea
Impressions, a public relations
and image
consulting firm. I was to be the assistant to the director of marketing, Andrea Benson. Andrea was fiftyish, brilliant, and extremely fashionable and striking. She was tall, slender, and with perfectly styled blonde hair. In other words, pretty much the opposite of everything I was.

I stepped from the shower, dried my
red
hair
, which I
not-so-secretly
knew was my best feature
, and returned to my bedroom to dress. I slipped into a conservative business suit and a pair of plain but practical shoes.
I examined my
short,
not-quite-plus-sized figure in the mirror and decided I was presentable.

Having been fed, the cats ignored me as I left the apartment.

"Ah yes," said the receptionist, examining a list on the desk in front of her. "You are to report first to Petra
Darkangel
from human resources. You're early. I will let her know you have arrived." I took an offered seat.

I sat there for ten minutes, staring around the office and feeling out of place. What
was I doing working for a high-
end public relations firm? I was a walking public-relations disaster.

A woman entered the foyer and walked over to me. "Felicia Connor?" she asked. She was younger than I was, slender, fashionably dressed, with blonde hair.

"Karen Sullivan," she said. "Petra's assistant. Come with me, please."

I followed Karen into the office. She led me past several offices before arriving at her own desk. "Have a seat," she said, indicating a selection of comfortable-looking chairs. "Petra will be with you shortly.

I looked around. We were feet from the windows, and the view was amazing. I wouldn't have expected an assistant to have such a prime location in the office.

I only waited a few minutes before a door opened. "Felicia?" a voice said.
It was a
familiar voice.

I looked up. A woman of forty
, several inches taller than me,
was standing several feet away. She, like everyone else I'd seen, was impeccably dressed in a business suit, stockings and heels. Her long, dark hair was pulled to the right. I stood up and took her offered hand.

"Come," she said, gesturing to her office. I stepped ahead of her, and she followed me into her office, closing the door. I took a seat in front of the desk and watched as she stepped behind it and sat down.

Her desk was nearly entirely bare. She had a computer keyboard and two thin computer monitors. Nothing else marred the surface.

I couldn't stop staring at her. She was beautiful, of course, but I wasn't the sort to notice other women. She leaned across the desk and smiled. Her eyes were green.

The features were different, but they were the same green eyes. It was the same smile.
The same voice.
This was the woman from my dream early this morning. I was sure I'd never met her.

I couldn't stop staring at her. Then I realized I was staring. "I'm sorry," I said. "It's just that you're so beautiful."

Then I realized what I'd said, and I started blushing furiously. "I'm sorry!" I said. "I'm sorry! It's just that everyone here is so beautiful and I'm so-"

She stopped me cold.

"First, never apologize for calling a forty-year-old woman beautiful. It's deeply flattering, especially when it is offered as heartfelt as yours was." Her eyes bored into me. "You are feeling out of place." I nodded. "You are measuring everything by the wrong standard."

She held up one delicate finger, silencing me.

"I know everything about you, Felicia. Everything. You went to public high school, where you were an outcast and had few friends, but the friends you had became dear, lifelong friends. You performed moderately well in math and science, and exceedingly well in English and the business classes you took. Your favorite subject was history, and you wrote every English paper you could on a famous historical figure or place. Never events."

She was completely right.

"You went to the public university, but you took a difficult study load and graduated near the top of your class. You wanted to major in history, of course, but instead studied business. You still wonder if you made the right choice." Her eyes bored into me. She was reciting all this with no reference to notes.

"As a girl, you operated a lemonade stand. Then you moved up to running errands for the elderly neighbor across the street, whose funeral you attended two years ago. You cried."

"How can you know all this?"

"You started baby sitting when you were twelve. By fourteen you were getting paid to tutor other children. You took your first job at a fast food restaurant when you were sixteen. In college you worked at an intern. Your most recent job, which you hated, but performed exceedingly well, was for a financial services company."

"You certainly did," she said. "Your former boss is a horrid man and in spite of your outstanding performance, was never satisfied. Do you know why he treated you so poorly?"

"So you wouldn't think you were worth more money or could find a better job."

"I know it for a fact," she said. "He and I were at the same social event some months ago, and he had too much to drink. He was bragging about it."

"That asshole!" Then I slapped my hands over my mouth.

"Yes," she said. "That asshole." She paused. "I know everything about you. I know you have two cats named Chelsea and Dervish." She paused. "I bet
,
if I tried, I could even guess what your dreams were this morning."

I began blushing again, but she either didn't notice or pretended not to.

"I also knew you were going to need this pep talk this morning and scheduled extra time for you today."

"Don't be. I've been trying to get you to come to work here for months. We need you."

I looked back at her.

She smiled. "
You know we video tape our interviews. Dana, when she interviewed you, told you this."

"Bring your chair around," she told me. "Sit next to me."

I got up, pulled the chair around, and sat down. I could smell her perfume. It was subtle and lovely.
She typed at her computer,
then
the video came up, the view of me in front on her main screen, the view from two more cameras on her second screen. She turned down the sound.

I watched as on the screen, I entered the interview room and sat down. Dana came around and sat down across the desk from me. Depending upon where I watched, I could see
myself from in front or the side,
and there was a third view that showed Dana.

"I have the sound off, as I want you to watch your body language." She let me watch for a minute or two. I was fidgeting in the chair and wringing my hands. "What do you see?"

"And completely lacking in confidence," she said. "Your answers to the questions were quiet and restrained. Bluntly, they were not at all in keeping with someone I would choose to hire."