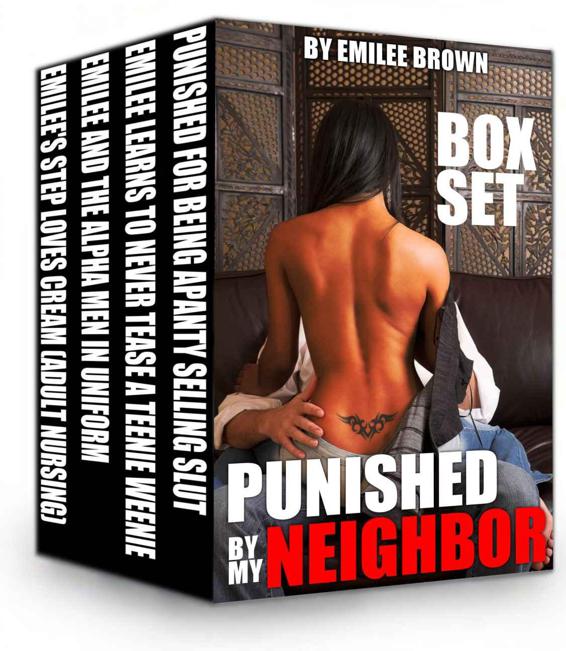 Punished by my Neighbors: The Interracial Box Set

Punished by my Neighbors: Box Set

No part of this book may be reproduced or stored in a retrieval system or transmitted in any form or by any means, electronic, mechanical, photocopying, recording or otherwise without the express written permission of the publisher.

This book is a work of fiction. Any resemblance to names, characters, and places are pure coincidence.

All characters are eighteen years of age or older and 100% consenting adults, ready, willing and able to engage in adult activities. This story contains material of a taboo nature, however it contains no contact between blood relatives.

I began as so many vulnerable young women do--punished first by a man I’d grown up next door to who I felt safe with and who ultimately betrayed me in a most delicious way, and then (a few months later) by another neighbor. This is the story of my first punishment at the hands of an older man who’d lived next door since I’d been in high school. He caught me doing something naughty and because he saw himself as an important adult role model in my life, he took it upon himself to punish me for my dangerous transgression.

I'd never heard of panty selling

When I’d had to borrow five bucks from my friend Dominique--for the second time in three weeks--she looked me square in the eye and said, “Emilee, you’ve got to start making more money.”

Of course, at first I protested. I was doing everything I could to find a job that would work around my school schedule and my part time office job. Flexible jobs weren’t easy to come by, and it wasn’t like I had tons of in-demand skills. I was a freshman in college, young, inexperienced, what the hell was I supposed to do for money.

And I’ll never forget what happened next. My gorgeous best friend put her hand on my arm, and her blue eyes narrowed at me. “I’ve heard some girls make bank selling their panties online, you could try that.”

I could not believe my ears! I’d always thought Dom was every bit as innocent as I--she’d never had a serious boyfriend, we’d spent many late nights piled on her bed, talking about what we were looking for in our ideal man. What physical characteristics he should have, what color his hair should be. She went for guys with muscle-bound arms. I was hot for the mysterious, European-accented type.

I thought I knew her so well! But she surprised me.

As I was collecting my thoughts, she continued. “There’s a girl in my psych class who makes $50/pair. She gets lacy thongs, buys them bunches at a time. Then she wears the same pair around for a few days, apparently the longer the better. She says some guys will pay extra for panties you’ve worked out in or played in. Then she takes some photos and pops the ad up on the web and within twenty minutes she has two or three men begging to pay her.”

It was only later that I realized Dominique knew an awful lot about how some random girl conducted her business. At the time, I was fixated on that $50 figure. I did the math roughly. “That’s almost a grand a month!”

Dominique nodded, her blond eyebrows raised in clear admiration for this classmate’s business ingenuity. “And she said she gets extra for bundles and special requests.”

“Sometimes the guys like to meet in person to pick up.”

I took a step back, suddenly brought crashing back to earth. “That sounds dangerous.”

“Nah, you just take along a big guy with you. She says most of the guys who want to meet are small, not scary at all, just a little lonely.”

“But you have to do pictures. I don’t think many men would be interested in my panties.” Don’t get me wrong, I’m quite comfortable in my own skin. But I wasn’t accustomed to men ever being interested in me, being curvy and shy. It seemed like the only men who ever hit on me were fetishizing my dark skin or plus sized figure--they didn’t actually have any interest in me. As evidenced by the most common line they’d use in bars, “I’ve never been sucked by an African Queen, what do you say?”

I shuddered as the last guy to utter this phrase slunk into my mind’s eye--sleazy from crown to toe.

“Try it,” Dominique admonished. “You never know. Maybe it’ll be a huge hit.”

She took my chin in her hand, her other hand on one slender hip. “I dare you. Post photos of yourself in your sexiest pair of panties, offer them for $50, and see what happens.”

After she drove away, I stood on the door stoop for a good five minutes staring after her little blue car. I couldn’t, could I? It was crazy. No man was going to pay $50 for a pair of my panties. And yet when I finally turned and put my hand on the doorknob to go inside, I had to admit, a dare was a dare, and I had nothing to lose by following through.

I spent three hours getting the photos just right. I tried everything. Kitchen (where the light was best). Living room (lazing on the leather couch). Finally, I tried all fours on the bed, ass in the air, tight baby t-shirt straining against my voluptuous breasts. I took some profile shots, and a few from behind. When I loaded them onto the computer to crop out my face, I couldn’t decide if they were sexy or vulgar, but I figured no one would ever know it was me, and Dominique had dared me.

I should have read preexisting ads before posting my own, but to be honest, knew I’d lose my nerve. So instead, I just typed out my story:

“I’ve been wearing this sexy red lace thong for the last two days and would love nothing more than to know it’s in good hands--your hands. Yesterday, I started with my regular morning yoga routine, I love to start the morning loosening up with sun salutations.

“After a quick shower, I put them back on, they’re my favorite pair and wearing them more than one day makes me feel so naughty.

“I got off, still wearing this sexy red thong, thinking of her perfect breasts in that unbelievable cage bra and thinking of you and how I’d be getting to share these panties and my sexy memory of my sorority sister with you...

“I’m so embarrassed now, that I’ve gone on so long about just a few of the hours I wore these panties yesterday and I’d love to tell you the whole story.

“So, I’ll tell you what. First man to send me $50, I’ll mail you the panties, a complete log of what I did while wearing them, and a few pictures of me in them. All for your eyes only. I want this pair to be yours. Is that what you want too?

P.S. For an extra $100, I’ll snap a sneaky peak of my sorority sister and send that along with my pics.”

But there, in my bed, my creamy black thighs spread wide, my fingers warm and rough against my pussy, desperation rising hot off my skin, I could suddenly understand why lust drove people to such crazy lengths. And I suddenly understood they’d been right all along; I’d been the fool.

I was building to a second climax when my email dinged and I shot out of bed, licking my juices from my fingers. There it was: my first reply. I expected it to be pervy--some guy just emailing to harass me. But it wasn’t.

“I’m interested in the panties. Will you deliver in person for an extra $200?”

$250 for taking a few pics, and getting myself so hot I’d had to take myself to bed? I couldn’t see a downside. I clicked reply but realized I wanted to be anonymous, so I quickly set up a throwaway email account and replied from there. “Would love to personally deliver! I’ll have to bring my boyfriend, though. Hope that’s okay ;-).”

Before I clicked send, my email dinged again as two more emails came in. Both from men desperate for my panties. The first wrote, “You have to choose me--I need to get to the finish.” And the second begged to buy every pair of panties as I wore them. “Please,” he wrote, “I need you to keep me in regular supply. Will pay $500/week for steady stream of freshly-worn panties.”

I was about to write them both to tell them about my $200 delivery request when my email dinged with more requests. I dashed down to the kitchen for a storage bag and stripped out of my dripping wet panties right there by the stove, wrapping them up and sealing out the air. If this kind of demand was normal, I’d be able to leave college with no debt whatsoever.

I climbed into a new thong--this one an ivory that contrasted beautifully against my dark skin--and checked my email again. Another six replies all in the time it had taken me to run to the kitchen. I hopped back to the classified ad and deleted it to put a stop to the flow of responses and then sorted the offers. The men who’d offered extra money for things I was willing to do--Mr. $500/week for instance--all got encouraging replies. “This pair sold in under 5 minutes for $250,” I wrote, “But I’ve just put on a new ivory pair. Here’s a pic.” And then I attached a hastily snapped crotch shot.

The man who offered $200 for delivery was the offer I took, not just because it was the most I was offered for one pair, but also because I felt a strange loyalty to him since he’d been my first reply.

Of the two dozen emails I’d received, only two were creepy or demanding, the rest were either business-like in tone or friendly. I knew I had a lot to learn about selling my panties as a business, but was already feeling like it would be well worth learning.

And that feeling only increased as a second round of emails came in, this round in reply to the ivory panties. “I must have these,” one email begged. “How can I make them mine? I’ll outbid any price.”

Others straight up made offers--$300-400 were common. I know that sounds made up, and I almost emailed the men back to ask them what the heck they were thinking. Didn’t they have other things they needed to spend that money on? Who threw $300 or more out the window to buy freshly worn panties?

And then, of course, there was the voice inside my head saying their offers were all well and good, but until I held their money in my hand I didn’t know if they were all talk, or men of action.

There was only one way to find out if they were men of action. And that was to meet up with the man who’d bought my red thong.

The RECKONING: A Jess Williams Western by Robert J. Thomas, Jill B. Thomas, Barb Gunia, Dave Hile
If You Know Her: A Novel of Romantic Suspense by Shiloh Walker
Tituba of Salem Village by Ann Petry
Prada and Prejudice by Mandy Hubbard
The Tea Shop on Lavender Lane (Life in Icicle Falls) by Sheila Roberts
God's Gift to Women by BAISDEN, MICHAEL
Boot Camp Bride by Lizzie Lamb
Passing Through Paradise by Susan Wiggs
The Barbarian by Georgia Fox
From Best Friend to Bride by Jules Bennett
Our partner