Read Puppet On A String Online

Puppet On A String 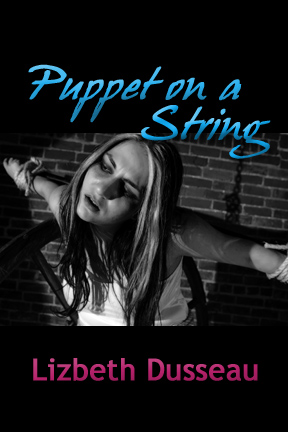 Puppet
On
A String

No part of this book may be reproduced in any form without prior written permission from the publisher.

“Hummmmmmm, you delicious man,” she purred in his ear, dreamily stretching against his warm body. They lay together on the bare mattress; the sheets, the blankets, even the pillows lay scattered around the bed like a cloud of white. They groaned languidly, unable to speak. It had been a very good fuck.

Shelby Ryan inched her way down his muscled body, kissing his gleaming torso while smelling the sweet stench of sex that lingered in the air around them. Finding his limp cock, she covered it with her lips, taking it whole in her mouth and sucking it in a soft unhurried rhythm.

“You think I ken take you on agin, lass?” he exclaimed with his elegant Irish brogue tainting his speech: something that happened often after a good roll in the hay when he wasn’t thinking clearly.

He gazed up at her through heavily lidded eyes.

“Nothing wrong with a worn out man,” she laughed.

In a flash, his drowsy face took on a scowl, and he reached out grabbing her tits and bringing her down to his chest. He held her fiercely with both hands locking on her upper arms. “Doan think you can best me, lass.” He rolled her over on her back, re-inserted his cock into her molten sex hole and began to fuck her once again.

She shrieked, as his hard resolve transformed the tenderness of the earlier moment into the brutal fucking she so relished. If only he understood half of what her heart desired and what her body needed. But he knew nothing about her sexual past and he never would. That was a time best put to rest, and those dark desires were best ignored. Sometimes she’d think of those years with other lovers when Padraig fucked her with bruising intensity – that much he could do very well. He fit all the stereotypes of the hunky construction worker: hard body, feral eyes, square jaw, a cock to match his virile build and a style of fucking as basic as fucking itself. In that way, he complemented her well, without ever knowing the truth behind his girlfriend’s shameless lust for sex.

“I have to go to work,” she announced with a tired sigh.

“An’ so do I. You fix me dinner tonight, or do I eat out?” he asked, as he rose from the bed, and looked for his jeans and the black t-shirt amongst the mess. Already he was losing the brogue in favor of an American twang.

“I’ll fix you something. We’ll eat here. I have a shift at the coffee house, then it’s just you and me and this bed again.”

A glimmer of light in his greenish eyes warmed her soul. Then, too, was the pleasing way his t-shirt stretched across his muscles, making her insides spasm with lust again. They’d be fucking before the night was over, of that she was certain.

“You know I leave tomorrow night for
,” she reminded him, wistful now, already missing him.

“Yeah, so you said. Funny, that I’ve got a girlfriend with enough money to spend on expensive trips.”

“I told you, this one’s practically a freebie, I can hardly pass up the chance. I just pay for my ticket.”

“You could come along?”

“Like hell I can. I work for a living. Or doan you remember that?”

“Yes, of course you do.” She lovingly held him in her glance, wondering how long they could last. So right and so wrong for each other at the same time. How could this be happening to her again? The men in her life could never be normal men. Maybe because she was not a normal girl. “A kiss before you leave?” She popped up from bed, moving her naked body against his while draping her arms over his shoulders for a long, wet kiss. He never failed to reply, as if his desire for her was as voracious as hers was for him.

had met Padraig Finnian in her coffeehouse. He was reading a newspaper, then a book, and stayed for nearly three hours hold up in the corner as if he planned to stay the night. He kept to himself, sober, closed-lipped and not particularly interesting, while Shelby poured him several cups of coffee and later made him a corned beef sandwich – he said their corned beef was the best he’d found in town.

“Is that so?” she said, glad for the compliment. Maureen, her partner in the coffeehouse, would be happy to hear that, especially coming from an Irishman. Corned beef was Maureen’s specialty. What had started as just a coffee house, serving all the usual designer coffees, was destined to expand its fare with deli sandwiches and homemade desserts. Maureen was avid about cooking.
stayed alive on coffee. The two worked well together.

But when Padraig Finnian turned up that fateful morning, he rather quickly messed with
’s newly won freedom from her old life. She’d wanted to remain single for a while, stretch her wings as an independent female living on her own. But vows like hers can swiftly change.

Why Padraig chose her was a bit of a mystery. It almost seemed as though he’d picked her out on a whim, just because she happened to be there, right place, right time. Not that she wasn’t a pretty girl, she was. She was a sensuous girl-next-door with rich olive-toned skin, a firm body and a mass of dark hair – unruly in bed, pulled back in a ponytail or bun when she was working. Obviously she’d caught his eye because once he picked her out, he made her the sole object of his attention, becoming a faithful customer of the coffeehouse and spending an ungodly number hours in his chosen corner when he wasn’t working. Maybe he had nowhere else to go. Only a few computer geeks who used their Internet connection logged more hours in the quaint establishment.

He introduced himself as Padraig Finnian, but he said no more about himself.

finally screwed up the courage to ask him what had been bothering her for several days. “Not that I have a problem with you patronizing our coffeehouse, Mr. Padraig Finnian, I was wondering if there is something you particularly want, coming here so often?”

He finally offered up a smile. A generous one: unaffected, unadorned by the sexual innuendo that she’d come to expect from most men. “What I want? I want you,” he said.

She had no idea how to answer his reply, except with an astonished, “Me?”

“Why else would I be here, lass, if it weren’t fer the pretty girl?”

“I’ll take you to dinner. How would that be? Maybe you’ll be less stunned after that.”

“Oh, yes, sure…” Too flabbergasted to say no, she said yes, and did not regret the decision.

He didn’t kiss her for three dates, and by the time the fourth one rolled around seven days later, she was weak-kneed with lust. Fate and pheromones took hold from there. They screwed in his tiny apartment with the Chicago ‘L’ just above the window, the noise of rattling trains going on throughout the night. The seedy scene of those first sexual moments with Padraig Finnian, sweating under his heavy body as he abused her pussy, only added to the fervor and the steamy climax that followed.

Screw independence from men! This man was just too good to pass up.

They’d been screwing each other for the past two years – with a couple of breaks when he got surly for reasons he rarely explained and suggested he leave or when she felt the raw power of Padraig Finnian overpower her and she needed to catch her breath. He gave her much of what she wanted, but not everything she needed, which made her rethink the relationship every few months, only to decide once again that he was best thing going in her life.

And now…
combed his hair with her hand as they kissed. She wanted him back in bed again, no doubt about that. Just not right then. “You will be here by six?” she asked.

“I will, I’ll bring the beer.” He looked down at her shoulders, scanning the left one with a careful eye, then running a thumb across the rough spot. “The scar? Finally healing, hum?”

“Finally. The doctor said it would take a while, the mole was deep.”

“Good.” He bent down and kissed the spot in an almost fatherly way.

“I don’t think you’ll even see it in a month or two, you suppose?”

He backed away and nodded. “You look perfect to me, Shelby Ryan, with or without it.”

“And you are so sweet to me.” She turned to find her clothes, while Padraig pulled on his work boots.

When he stood up, towering over her, his handsome, hard body was a feast for her desiring eyes.

“See you at six,” he said, waving as he walked out the door.

Though she couldn’t see him, she felt his energy retreat as he walked away from her apartment and left her to the rest of her life. She’d count the hours until she’d see him again. The last couple of weeks felt much like it had been when they first got together. Not a wrinkle in a seamless relationship, which almost made her regret the decision to take off for
. But she really had no choice. The ticket had been purchased weeks before, she’d made a commitment, and Christine would never forgive her if she didn’t show up as planned.

She actually invited Padraig his time, but he kept telling her there was something about his Visa, would screw things up if he didn’t stay put. She didn’t think that was right but refused to press him on the issue. There was a deep darkness in him that sometimes scared her. She had the feeling that he too had things to hide, maybe things having to do with his former life. In that way, they were very much alike.

swung her travel bag over her shoulder and moved quickly through airport security, breathing a sigh of relief when she walked right through without being pulled over for a random search. She’d put as little as possible into her bag, just in case. But
just in case
didn’t happen this time. She purposely dressed conservatively, in brown pants and a matching blazer, a cream silk shirt underneath. Her hair had been neatly tied back into a simple bun and at her ears were a pair of small pearl earrings. Maybe her brown boots with the tall high-heels suggested the innately sexy female behind the demure clothes, but high heels were in fashion that year and a woman of her age wore them with a natural grace. Nothing in her attire was meant to attract attention and apparently her low profile caused no suspicions.

Her only worry as she moved on through security was that she’d arrive in
and find her checked bag missing. On her last trip to
, she’d waited hours in a Spanish airport for her luggage to arrive.