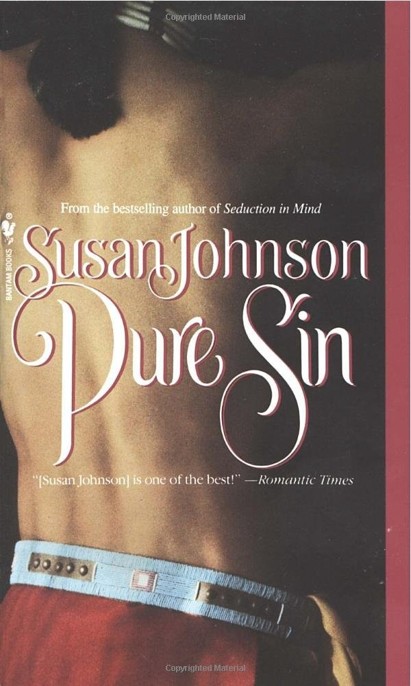 Bantam Books are published by Bantam Books, a division of Bantam Doubleday Dell Publishing Group, Inc. Its trademark, consisting of the words "Bantam Books" and the portrayal of a rooster, is Registered in U.S. Patent and Trademark Office and in other countries. Marca Registrada. Bantam Books, 1540 Broadway, New York, New York 10036.

She met Adam Serre on the night his wife left him.

He walked into Judge Parkman's foyer as she was handing her wrap to a servant, and they nodded and smiled at each other.

"Pleasant weather for April," he said as they approached the bunting-draped entrance to the ballroom together. He smiled again, a casual, transient smile.

"Is the temperature unusual?" Flora glanced up only briefly, intent on adjusting the length of her white kid glove on her upper arm.

Adam shrugged, his broad shoulders barely moving beneath his elegantly cut evening coat. His gaze was on the crowded ballroom visible through the decorated portal, which was patriotically swathed in red, white, and blue in honor of their host's recent appointment to the federal bench. "It's been an early spring," he said, searching for his host in the glittering assemblage. "But, then, the Chinook winds are unpredictable."

Both were curiously unaware of each other. Adam, for whom the previous few hours had been volatile, was still distracted. Flora Bonham, only recently arrived in Virginia City after a long journey from London, was looking forward to seeing her father.

They were both late for the judge's celebration party.

But the sudden hush that descended on the ballroom as they appeared in the doorway had nothing to do with their tardy arrival.

An impassioned buzz of astonishment and conjecture exploded after the first shocked silence, and Lady Flora Bonham, only child of the noted archaeologist Lord Haldane, wondered for a moment if she'd left her dress undone and some immodest portion of her anatomy was exposed before the expectant throng.

But after a moment of panic she realized all the guests' gazes were focused not on herself but rather on her companion, and she looked up to discern the cause of such avid fascination.

The man was incredibly handsome, she noted, with a splendid classic bone structure and dark, sensual eyes that held a tempting touch of wildness. But before any further appraisal flashed through her mind, he bowed to her, a graceful, fleeting movement, said, "Excuse me," and walked away.

Almost immediately she caught sight of her father advancing toward her, a warm smile on his face, his arms out in welcome. Her mouth curved into an answering smile, and she moved into her father's embrace.

It was the first time she ever saw Adam.

"You look wonderful," George Bonham said as he held his daughter at arm's length, the brilliant blue of his eyes taking in Flora's radiant beauty. "Apparently the rough ride from Fort Benton caused you no harm."

"Really, Papa," she admonished. "After all the outback country we've lived in, Montana Territory is very civilized. We had to walk only a dozen times to lighten the stage through the deepest mud, the river crossings were uneventful, and the driver was moderately sober. After a hot bath at the hotel, I felt perfectly rested."

He grinned at her. "It's good to have you back Let me introduce you; I've met most everyone in the last months. Our host, the judge, is over there," he went on, gesturing. "Come, now, let me show you off."

But Flora noticed as they joined a group nearby and greetings were exchanged that the man who'd entered the ballroom with her continued to elicit extraordinary interest. Every guest seemed alert to his movements as he crossed the polished expanse of Italian parquet flooring.

No one had expected Adam to appear that night.

And as he strode toward his host, greeting those he passed with a casual word, a smile, a sketchy bow for old Mrs. Alworth, whose mouth was half-open in astonishment, a flurry of excited comment swirled through the room.