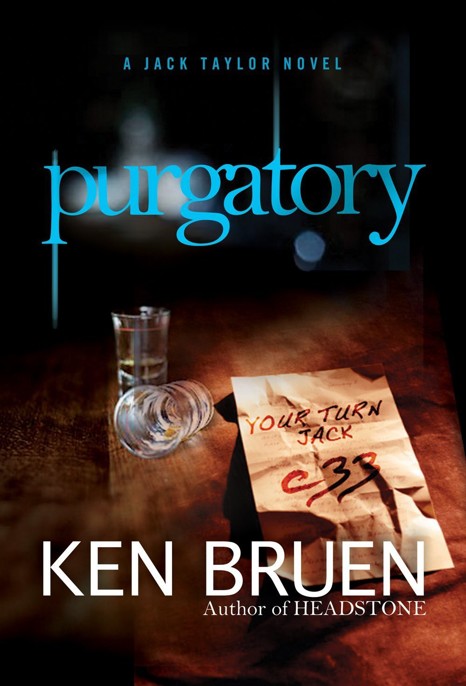 All rights reserved. No part of this book may be reproduced in any form or by any electronic or mechanical means, including information storage and retrieval systems, without permission in writing from the publisher, except by a reviewer, who may quote brief passages in a review. Scanning, uploading, and electronic distribution of this book or the facilitation of such without the permission of the publisher is prohibited. Please purchase only authorized electronic editions, and do not participate in or encourage electronic piracy of copyrighted materials. Your support of the author’s rights is appreciated. Any member of educational institutions wishing to photocopy part or all of the work for classroom use, or anthology, should send inquiries to Grove/Atlantic, Inc., 154 West 14th Street, New York, NY 10011 or
[email protected]
.

Purgatory
is a work of fiction. While the real-life crimes referred to in the novel actually occurred, their chronology has been condensed in order to maintain a greater level of suspense and continuity in the actions of the characters in the story, who are entirely fictional.

The skateboarders had that peculiar blend of Irish self-consciousness, dumb persistence. The unusually good weather in early January had led to a makeshift ramp that was ambitiously steep and high. The Council would have removed this but had its hands full with the Occupiers, who had a large tent perched to the left side of Eyre Square.

Too, the skateboarders kept the locals from lynching the Council over various charges.

And just about damn everything else.

Three Guards were deemed sufficient to watch the growing crowd for what was rumored to be a spectacular attempt.

A double flip in
midair
from Joseph, a sixteen-year-old whiz flier from Tuam. He was small. Undistinguished, with the revamped grunge look that owed more to the new poverty than to fashion. Quiet seeped as he took his run at the ramp. A slight
ah
from the crowd as he accelerated faster than they’d expected, then he was airborne, high above the ramp, left the board, was in mid-turn when the single shot rang out.

He seemed to hang for a moment, the top right side of his brain scattering in a slow mist, then a loud scream from the crowd as his body hurled to the concrete.

Two people were hurt in the panic.

A skater had the presence of mind to steal the almost-famous board.

“There’s nothing wrong with her.”

“She talks to people who aren’t there.”

“No she doesn’t, she only listens.”

My life seemed to have reached a time of calm. New home, new(ish) habits, new people.

Who the fuck knew?

A staple of my father’s generation. People bought them for their family’s future. The Lotto and lotteries of every ilk came down the greed pike and these forgotten bonds languished in drawers or the pages of family Bibles never opened.

I had, owing to a threat to my father’s reputation, rummaged among his few possessions.

Kept in a Lyons Tea chest, his few papers scorched my heart. A certificate of loyalty to the Knights of Columbanus, an Inter-Counties semifinal medal in hurling, now as tarnished as the country. A fade to faded picture of
the family
at

My parents, in their street clothes, with a summer concession of my father’s, sleeves rolled up. My mother was wearing what might have then been called

Save they didn’t do
seasonal.

She wore the same item in winter, with a cardigan added. She did have her one habitual trait.

Leaking from her down-turned mouth to every resentful fiber of her being. I was maybe eight in the photo, an ugly child who grew to embrace ugliness as a birthright. Tellingly, my father’s hands were on my shoulders, my mother’s were folded in that

“What are you looking at?”

Pose she perfected every day of her miserable life.

My mother wasn’t a simple bitch.

She was more evolved, a cunning sociopath who hated the world under the guise of piety.

Dead for years now, so did I finally, Oprah-like, come to understand and, yes, alleluia,

And, oh my God, she would spin in her grave to know those prize bonds were sitting there. There may not be justice but there is sure some cosmic twisted karma. Took a while for the bonds to be processed but, when they were, I was stunned.

How weird is that? When I couldn’t afford it on any level, I went at it like a famished greyhound. Now, I quit?

Three months in, I was doing okay, not gasping, hanging in there and feeling a whole lot healthier. I’d been down this road so many times, but something had altered. My last case, I literally lost two fingers, and witnessed some events that shadowed me in a new way. I finally figured out booze wasn’t easing my torture but fine-tuning it. Would it last? Who knew?

I was sitting in Garavan’s, just off Shop Street. It still resembled the old pubs: an Irish barman, snug, no bouncers, decent slow-pulled pints, and memories of the bearable kind. Pat, a middle-aged guy, was tending the pumps, brought me a black coffee, glass of sparkling water. He was off the booze his own self, so no gibes. Said,

He was an old-school smoker, mainlined nicotine. I said the usual hollow things, ended with,

“Did you use the patches?”

Whether of health, economics, his wife, I didn’t push.

Life needs a touch of mystery and not everything requires an answer.

—Sara Gran,
The City of the Dead

Purgatory is the pit stop en route to hell.

The woman sat opposite me, didn’t ask, just sat. This used to happen a lot. People believing I had some inside track for finding things, people, solutions, and maybe answers. I’d found some answers, over the years, and they were always the wrong ones. Or right but for the wrong reasons. I’d given it up with the booze, the cigs, the Xanax.

Before she could speak, I said,

Her mouth made a small O of surprise. I knew the gig.

Could I find him, what happened to him?

My new home was a steal.

Galway, in the boom years, the most sought-after location for housing in the country. Plus the most expensive. Now the new austerity, the bankruptcy, and you couldn’t give away property. I rented a two-bedroom, ground-floor, bright, open apartment in Merchants Road, not a spit from the Garda station.