Read Pursued by the Playboy Online

Pursued by the Playboy 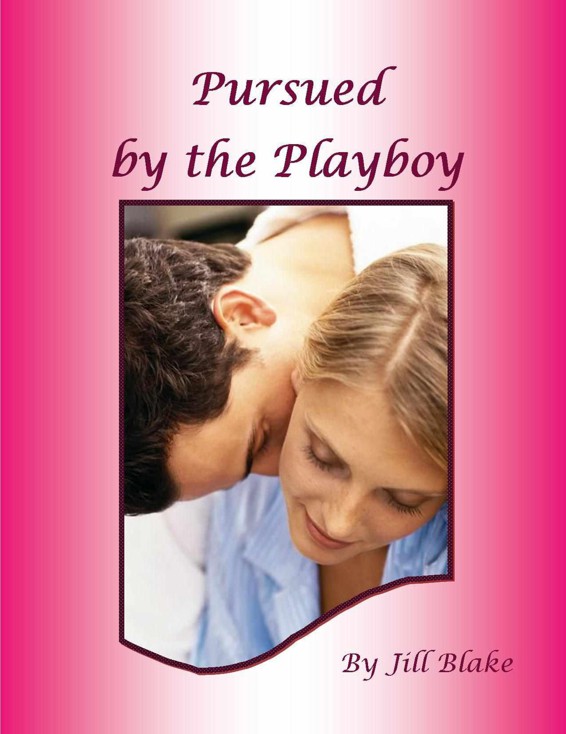 Pursued by the Playboy

Kate Warn
er tugged up the low-cut bodice
of her black gown.  In a closet full of functional clothes, it was the only item that fit tonight’s dress code.  If only she didn’t feel so exposed wearing it.  She glanced around at the clusters of guests in glittering evening couture.  Jewels that cost more than her annual salary winked beneath the chandeliers of
Philadelphia
’s Four Seasons ballroom.   Her own neck and hands felt conspicuously bare.

“Stop fidgeting,” Jake murmured at her side.  “You look fine.”

She sighed.  “Right.  This from the man who wears cowboy boots for every occasion.”

“Of course.”  She glanced down.  The boots were black and polished to a high sheen.  But here, at a fundraising gala for ovarian cancer research, thirty-plus miles from the nearest horse ranch, they were as out of place as Kate herself.

He flashed a grin.  “Come on, let’s find our table.  Looks like the festivit
ies are about to begin.”

Kate’s palms started sweating again, the satin clutch in one hand nearly slipping as she followed Jake through the crowd.  She’d rather spend Saturday night getting a Brazilian wax.  Or
filling out budget justification forms in triplicate.
But as one of tonight’s honorees, she didn’t have the option of not showing.

It could have been worse.  Instead of Jake at her side, she could have braved the crowd alone.  A faint shudder rippled through her.  Or she could have been back at her parents’ house, shrinking into the corner of the living room sofa, trying to shut out the perpetually raised voices that raged around her.   They were still arguing when she’d phoned Jake earlier that evening in a panic.  By the time he pulled up to the curb where she was waiting, her stomach burned from the three ibuprofen she had dug up from her overnight bag and swallowed dry.

“Thanks for rescuing me,” she said now, as they took their seats.  “
I could’ve called a taxi, but…”

“No worries.  Besides, I love rubbery chicken and overcooked peas.  I hear that’s what they’re serving tonight.”

“Seriously, Jake, I appreciate it.”

“Enough to foot dinner for two at Le Bec Fin?”

She draped her silk shawl over the back of her chair.  “I don’t do haute cuisine.”

“Not you.  Jennifer.   I bailed tonight, told her it was a family emergency.”

“You know me, I don’t do serious.  Besides, I’ll make it up to her later.”  He wagged his brows, Groucho Marx style.  “And it’s not like I lied.  You
are
family.  My parents still hope we’ll eventually get together.”

She rolled her eyes.  “Please, they’d disown you if you ever brought home a shiksa.”

“Not if that shiksa were you.”  He paused.  When she didn’t respond, he sighed and changed the subject.  “So, what set off the fireworks tonight?”

Between her father’s philandering and her mother’s rages, anything could have triggered a fight.  Kate had lost count of the nights she’d spent during adolescence with the covers pulled over her head, praying her parents would finally divorce.   Her father would periodically try to justify his slap-dash attitude toward fidelity by pointing out that only a saint could put up with “that banshee” and he was no saint.  The fact that his job as a civil engineer took him away from his family for weeks or months at a time didn’t help.   In his absence, Kate’s mother shifted the focus of her rage to whatever crossed her path or came within striking distance.

Kate learned early to keep quiet and out of sight, the better to avoid her mother’s attention and temper.  Through hard work, luck, and the mentoring of several sympathetic teachers along the way, she managed to escape to university at sixteen.  That her parents were together years later and still locked in acrimonious battle was something she no
longer even tried to understand.

Tonight she had hoped would be different.  That at least for a few hours they could be civil to
one an
other, just long enough to witness their only daughter receive an award as “Top Junior Researcher of the Year,” along with the hefty check that would fund her lab work for another three years.

She picked up her cream linen napkin and adjusted it on her lap.  “They were supposed to meet me at the station this afternoon.”  She fiddled with the silverware beside her plate.  “No one was there, of course.  I walked.  It’s not far—half a mile, maybe.  They didn’t hear me come
in.  I waited to see if things would die down, but...”  She shrugged.  “I changed, called you, and left them a note.”

Jake’s hand covered hers, stilling her fingers.  He knew all about her parents’ dysfunctional relationship, had tried to protect her from it.   Instead of returning home between semesters during college and grad school, she had at Jake’s insistence tagged along with him to the rambling farmhouse in
Montgomery
County
where his mother would envelop her in a lavender-scented hug and ply her matzoh ball soup.  Jake’s father, a soft-spoken professor whose books on Cold War diplomacy informed and molded an entire generation, treated her like a favored student.  They’d sip tea and debate politics late into the night, solving the world’s problems around the kitchen table.

She missed those discussions.  Even before Jake’s parents had retired to
Boca Raton
, Kate’s visits had grown infrequent.  Her time got eaten up by graduation, a post-doc that had taken her to the opposite coast, and finally a tenure-track position with endless hours doing bench-work, writing up results, supervising students.  She wondered sometimes how she’d allowed her world to get so narrow.

Jake cleared his throat.  “You okay?”

The screech of a microphone from the podium interrupted.  Kate shook her head and turned to the front of the room, where
the
evening’s host began his introduction.

As the speeches wound down, Marc DiStefano shifted in his chair and glanced surreptitiously at his watch.   The one night he wouldn’t have minded getting called in to the hospital, his pager was silent.  Without work as an excuse, he couldn’t very well walk out.   His family had supported tonight’s cause for too many years.  Besides, he’d already noted a few familiar faces in the crowd:  fellow physicians—including the chief of his own department of gynecologic oncology—who would certainly remark on his leaving early.

He sighed.  Across the table, his sister Emma frowned at him.  Her husband gave Marc a sympathetic look.  The audience began applauding, and belatedly Marc joined in.  As the noise died down, he glanced toward the podium and stilled.

A young woman stood at the microphone, her face framed by wisps of chestnut hair.  Her mouth was just a little too wide for her face, her jaw a bit too blunt.  She was slender, with high breasts and gently curved hips, and legs so long they made his mouth water.

Marc glanced down at the program, skimming to the end:

Katherine
Warner.  Recipient of this year’s Ovarian Cancer Research Foundation Award for Top Junior Researcher.  Dr. Warner received her PhD in Cell & Molecular Biology from the University of Pennsylvania, where she is currently the youngest faculty member in the CMB Department.  Her work focuses on identifying novel biomarkers for the screening and early detection of ovarian cancer.

Her husky voice
washed over him, leaving goose-bumps in its wake.
“
This year in the
United States
,” she
began
, “t
wenty
-two thousand women will be diagnosed with ovarian cancer
.
Fourteen thousand will die
.
Despite the fact that
ovarian cancer accounts for only three percent of cancers among women, it causes more deaths than any other cancer of the female reproductive tract.  Why?
Because there is no screening for ovarian cancer.
By the time
most
women get diagnosed,
malignant cells have
already spread beyond the ovary
.  The five-year survival rate for advanced ovarian cancer is less than forty-five percent.
Compare that to ninety percent survival for
women who get
diagnosed early.
”

Marc glanced around at the rapt audience.

“Ladies and gentlemen, this needs to change.  We need to find a way to screen for ovarian cancer, so we can diagnose it early and treat it before it spreads.
Thanks to
the Foundation’s
generous support,
we can continue to work toward this
critical goal
.”

Applause
brought his attention to the front of the room again, in time to see Katherine Warner’s delectable backside retreating from view.  He shot up, ignoring the napkin that dropped from his lap to the floor, and his family’s surprise at his abrupt departure from the table.

He was tall enough that he could see above most of the crowd to where she stood, surrounded now by well-wishers.  Her shoulders appeared tense, the cords standing out in her neck when she turned her head, gaze sweeping around as if looking for an exit.  For a moment those eyes rested on him, and he felt as if he were drowning in a blue so dark it was almost black.  His lungs seized. Then a thick fringe of lashes swept down and he was able to breathe again.

In the background he vaguely heard the sound of chairs scraping, glassware clinking, an orchestra tuning up.  He cut through the people separating them and stopped directly in front of her.

“Congratulations, Professor.”  He captured her hand mid-gesture.  A jolt of sensation shot up his arm.  She was smaller than she had appeared on the podium, the top of her head barely reaching his shoulder.  Her fingers fluttered against his, like a trapped
hummingbird, and he swept a thumb over her knuckles in a soothing gesture.  “Marc DiStefano.  We’re colleagues of sorts, though we haven’t met before.”

“At the hospital,” he clarified.  “Gyn onc.  So what you discover, I’ll hopefully implement.”

Her smile was cool.  “It’s a pleasure to meet you, Dr. DiStefano.”

“Marc, please.  Otherwise it gets confusing.  Too many of us answer to the same name.”  He glanced toward the other end of the ballroom, where couples were beginning to sway to the music.  “Would you like to dance?”

“Come on, Professor.”  His fingers brushed her arm, and she shivered. “Just one dance.  It’ll give me a chance to pick your brain.”

The brief flash of teeth biting her lip made him want to run his thumb—or better yet, his tongue—over that bottom lip and soothe the hurt.  Before he could do anything rash that would embarrass them both, she gave an abrupt nod.  Clearly the appeal to her intellect had done the trick.  “Excuse us,” she murmured to the other guests who still stood in a semi-circle around her.

Marc cupped her elbow and led her toward the space that had been cleared for dancing.  Their bodies came together perfectly:  her soft fingers enfolded in his firm grip, her silk-encased breasts brushing lightly against his chest, their legs grazing against each other as she followed his lead.  Her scent filled his nostrils, a delicate blend of citrus and jasmine and something else, something uniquely her—soft and clean and alluring.   He felt himself hardening, and wished he could whisk her away to someplace private where he could lose himself completely in her embrace.

The orchestra segued into another tune and she cleared her throat.  “You wanted to ask me something.”