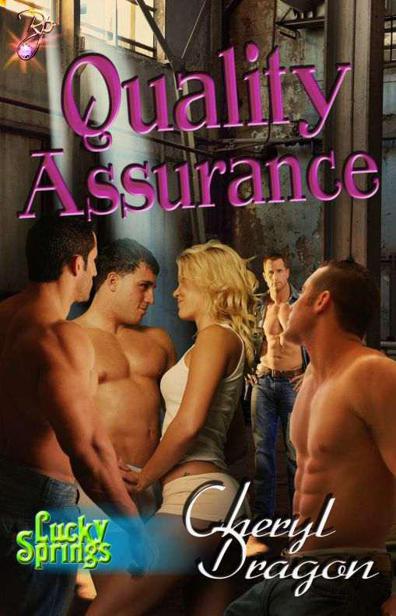 There were a lot of country songs about leaving home and returning home. When Ashley Tassin had left, she’d never expected to move back to Lucky Springs, Louisiana, but here she was. Bittersweet and anxiety inducing, both feelings fluttered inside of her as she sat in her grandmother’s kitchen after almost ten years away from home. She’d never intended to move back, but being an adult meant tough choices. Life hadn’t been as smooth as she’d hoped.

At the moment, she felt like the seven-year-old who’d sat in this very kitchen for Sunday dinners and dreamed of life in the city. Lucky Springs wasn’t New Orleans or even Shreveport, but she wasn’t alone, her three friends had gotten jobs in her hometown as well. Having support when facing the past made it a little easier.

They’d share the house for now. Lizzie was sweet and friendly from the deep south of Louisiana. Crystal was frank and very smart from the suburbs of Shreveport. Zoe was a couple years older and bold with no shame. She’d moved around all of her life so Zoe was rarely flustered by anything. They’d all bonded over wanting to make it on their own and not rush to the altar.

Good southern girls could now work, get married, have kids and be perfect homemakers. Ash could just hear her mother going on about women needing to raise their kids not stick them in daycare and other mantras that made Ash want to chew glass.

“I don’t know why you’re so down, Ash. It’s such a cute little town. Makes me feel like Anne of Green Gables. Everyone is so friendly and it’s surrounded by nothing for miles.” Lizzie’s Cajun drawl hadn’t diminished at all from college or work up in Shreveport.

“Do you want to go back to the bayou?” Ash asked.

Lizzie bit her lip and shook her head. “Going home is rough.”

“Mostly men—another point in our favor.” Zoe poured another cup of coffee. “Don’t get me wrong. I prefer the city too, but we need jobs. The market hasn’t bounced back yet. Once it does, I’ll be headed to New Orleans or Atlanta. But the men here will make it better.”

Smiling, Ash pulled up the website for their new employer, Lucky Springs Industrial, on her computer. Ash was more interested in her new work situation than men, but Zoe could juggle many interests without a bit of stress. It was Zoe who had fueled the Sex and the City fantasy of living in a big town and enjoying the single life with tons of hot men and no commitments.

Shreveport wasn’t New York, but they’d all gotten jobs there, at a same company, after college. Then they’d all been downsized. They’d stuck together. The arrangement suited her personality since Ash hated being alone but needed to get away from her family if she wanted to be happy. Her parents had created a pressure cooker for her throughout school. All parents wanted their kids to achieve, but her parents had demanded excellence. Now, she was back here and it scared her a little.

Crystal, the plus-sized beauty with a brain for numbers, set a mixed drink in front of Ash. “That’s enough pouting. I know your family bugs you, but we’re lucky to have a place to live. All the apartments and houses are full up. We’ll pay fair rent and what can your parents say then?”

“They don’t want money. Nana moved in with my parents because she falls. She’s thrilled to have me here and to have nice southern girls like you in her house instead of rowdy single men.” Ash loved her Nana. She was the one person Ash missed regularly.

Zoe rolled her eyes. “You’re an adult, Ash. They can’t put you in beauty contests or expect you to win prom queen anymore. That part of life is over. You’ve got a great job now and didn’t disgrace their small-town sensibilities by bringing home a baby fathered by some random guy. They should be thrilled.”

“Do you think Lucky Springs is Mayberry?” Ash laughed for the first time since she’d returned three days ago.

Lizzie blushed. “I heard people talking in the salon when we were there. Sounded wild to me.”

“I was talking to some friends and the owner of the salon, Jessica. It seems like there’s an underground sex party thing going on in Lucky Springs.” Ash shook her head in disbelief. Sweet little Lucky Springs was a place to raise kids and let them roam the streets. No one locked their doors. In some ways, it was Mayberry, but they didn’t have strictly old-fashioned values.

“No, this was before the male infusion. I’m sure that doesn’t hurt since there’s a shortage of women now. Some of the factory jobs were taken by women, but let’s face it, most factory work attracts men. Who moves for a job? Single men without kids in school or wives with jobs. So I found out that some of these men are sort of pairing off or grouping up.”

“Like prison? They’re turning gay?” Crystal sighed. “I thought I had a shot with those odds.”

Zoe poked Crystal’s shoulder. “Don’t get down on yourself. We’re in a position to be picky and play the field.”

“Obviously, they’re living together for cost and space limitation, like us. But Jessica has four men to herself. They’re bisexual.” Ash’s mind whirled at the options there. “I guess that’s catching on with some of the men. I’m sure plenty just want one woman and wouldn’t touch another guy, but it’s not my Nana’s Lucky Springs.”

“Your nana’s a widow?” Zoe asked with an arched brow.

“Yes, why?” Ash braced for her friend’s filthy mind.

“Yuck. I’m just warning you guys. If you get a weird sexual proposition, it might not be a joke or dare. So don’t tease the men.” Ash pointed at Zoe.

“And don’t let them take advantage.” Ash pointed at Lizzie.

“What about me?” Crystal asked.

Ash looked up from her computer. “You and I are too practical to fall for that crap, Crystal. I know you’ll do the smart and safe thing.”

Sitting down next to Ash, Crystal snagged the laptop. “Checking out the guys in Quality Control, are you? No pictures. That sucks. Will your daddy hate you working with all the men?”

Ash shook her head. She knew she’d touched a nerve by not warning Crystal about all the men. It wasn’t because her friend was big, but simply that she didn’t fall for stuff. She had her guard up. “I’m the liaison between the sales department and quality control. My job is to keep the customers happy. It’s not all men.”

“QC is. The company makes electric and battery powered carts and parts for cars. So the customers are mostly other companies or industrial places. Men,” Lizzie said. Her job was in customer service.

“And the salesmen are mostly men. Like ninety percent.” Zoe smiled. “They’re hiring new teams, and I get to train them in marketing our products to the customer. Hands on sales.”

“Right up your alley.” Crystal rolled her eyes. “You two are welcome to visit me in accounting or Lizzie in customer service. Plenty of girl talk there.”

Ash shook her head at the computer. “I’ll be coming by. Eli Hollier…”

“Maybe he forgot all about it?” Ash hoped. “He had a crush on me in high school. Well, okay, junior high and even elementary school. I ignored it, but in high school, he got brave and it was awful.”

“Is he ugly? Gross?” Zoe scrunched her nose.

Ash shook her head. “He was a super brain with glasses who got straight As and didn’t play any sports. When we were little, it was cute. Then you grow up and he went to the geeky side of things and I was lucky. I was popular and kids are crazy. You even talk to the wrong person and you’re a loser. He had a crush, but he had to ask me out in high school. In front of people. I’m sorry but it was an impossible situation. I felt horrible.”

“You didn’t know he was there when you interviewed?” Crystal asked.

“No, my pay is through the sales division. They hired me to coordinate with QC to keep things moving and free up their sales force. I wish they’d needed someone in human resources, but it’s the same thing. Dealing with people. I just have to learn the product.” Ash ran her fingers through her hair. “Damn.”

“I’m sure he’s over it. Maybe he’s married? It’ll be a funny joke about high school stereotypes and clique crap.” Lizzie grabbed the computer and searched his name.

“That’s not the kind of thing people forget,” Crystal argued.

Zoe leaned over Lizzie’s shoulder. “No, they don’t forget. But this guy isn’t married, and he’s got a lot of degrees. Moved back to Lucky Springs from a job in Houston. God, I love Facebook!”

“No one stalks men like you, Zoe. Is there a picture?” Crystal asked.

“No, sorry. Just an avatar.” Lizzie closed the laptop. “He’s not the only guy in QC, Ash. Charm the others. You’re great with people.”

Ash took a deep breath and leaned back in the chair. “He’s not the only guy, but he’s the manager of QC. No way around him.”

“So charm him. Wait for the right moment, and tell him you’re sorry for being a bitchy beauty queen in high school. Family pressure, blah blah blah. Just because you were popular doesn’t mean you didn’t have lots of pressure and expectations from your family. It takes work to stay on top.”

“Except this isn’t high school anymore. Now, he might be the one on top. I’m moving home just lucky to have a job.” Ash hated feeling like a failure.

Zoe couldn’t be more right about Ash’s past, but in the light of maturity, Ash had no excuse. Crystal’s silence spoke tons about the scars and resentment high school could create, but until Ash met with Eli, there was no way to know how he’d react.

Lizzie turned on her ray of sunshine smile and glowed positivity.  “Don’t underestimate the impact of a genuine apology. Then just be nice and do your job. HR could have an opening soon if the place keeps expanding.”

Ash tried to soak in the shiny happy attitude and hoped for the best. She had feelers out for jobs in big cities. Maybe, she’d get a ticket out of Lucky Springs soon. No one wanted to face their past, but people had good memories in her home town.

“She was hot!” Fred turned a page in Eli’s old yearbook with Xavier and Jackson looking over either shoulder as they sat on the huge sectional.

“No doubt there.” Eli sat in the matching recliner. There were plenty of pictures of Ashley Tassin. The blonde-haired, blue-eyed beauty had been petite and perky. He still remembered how she’d made his heart beat faster every time she’d smiled.

Investigation by Uhnak, Dorothy
Worth It by Nicki DeStasi
Four Doors Down by Emma Doherty
Christmas at Rose Hill Farm by Suzanne Woods Fisher
Aeroparts Factory by Paul Kater
Demons by Bill Nagelkerke
Shadow of Power by Steve Martini
Skateboard Tough by Matt Christopher
All the Way by Marie Darrieussecq
A Shroud for Delilah (DCI Webb Mystery Book 1) by Anthea Fraser
Our partner