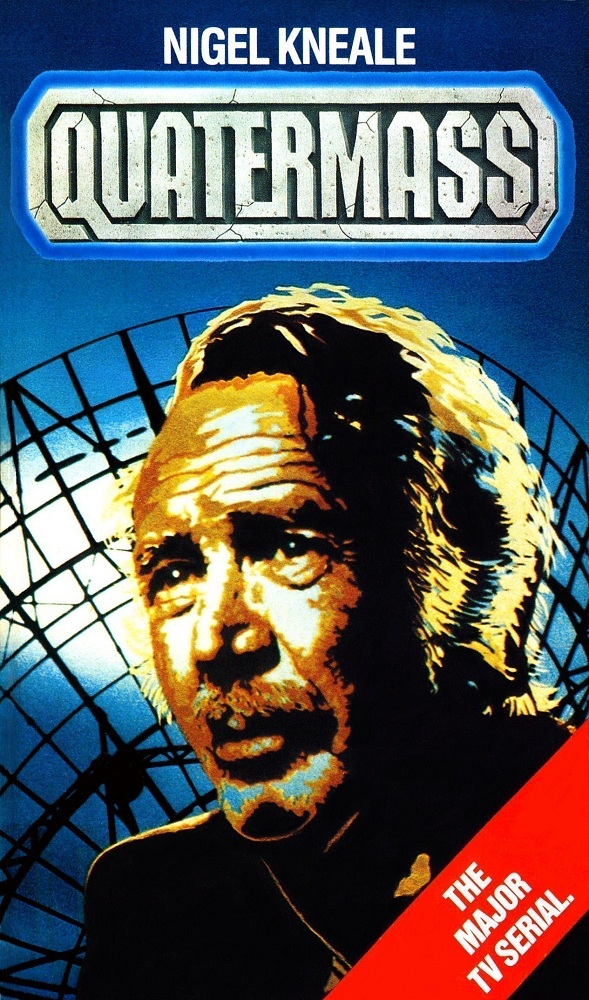 IN SPACE
the Russians and Americans squander billions on pointless projects.

ON EARTH
there is anarchy. Civilisation is breaking down.

Gangs of killers roam the rubbish-strewn streets. Fuel and food shortages have made the population desperate. Through the countryside bands of mystics calling themselves the Planet People chant their crazed beliefs.

Professor Bernard Quatermass, once a space pioneer himself, is an old man now. Disgusted and appalled by the state of the world, he has one final mission—to find and save his young granddaughter. She may have joined the Planet People. He follows as thousands of them converge on the ancient stone circle of Ringstone Round.

It is there that he witnesses an event that defies all sanity. For Quatermass it is the beginning of a long horror—a terrifying paranormal power has begun to afflict the Earth.

His upper arms were suddenly gripped from behind. He managed to get a look at another grinning face. Then a third came at him from the side and wrenched the case from his grip.

“We’ve got you, mate,” said the first youth. His accent was still unplaceably correct. Public school or an imitation of it. The “mate” jarred.

Quatermass saw his case open on the pavement, clothes being pulled out of it. He had brought everything with him, having no intention of going back to that filthy hotel.

Quatermass chilled. He was not being robbed but evaluated. “I’m not worth kidnapping if that’s what you . . .”

Something hit him in the face. “That’s for us to say!”

Such pain as he had not felt for years. But he knew, through it, that he had only been hit lightly. He saw brass knuckles, but there had been no sound of cracking.

“Get his teeth out.”

“Grandpa’s still got his own. Haven’t you?”

This time he saw the knuckles flash. He twisted and the blow grazed his temple. He cried out. He felt himself being swung round, held ready. He knew what came next: the pummelling and kicking that he would not survive.

They were making him wait. Tormenting.

An imprint of the Hutchinson Publishing Group

First published by Arrow in paperback
and Hutchinson in hardback 1979

Made and printed in Great Britain by
The Anchor Press Ltd, Tiptree, Essex.

“T
hat was a body!” Quatermass shouted. He leaned forward to rap on the armour-glass and put his mouth as close as he dared to the crude speaking tube. “We ought to go back.”

The driver pretended not to hear. He was obviously pretending because Quatermass could hear engine noise through the tube. He rapped on the glass again until arthritic pain stabbed his knuckles.

He peered through the steel mesh on the taxi’s rear window. The body, if it really had been one, was almost out of sight. There were only a couple of street lamps alight in the road and one was feebly intermittent. No help to an old man’s night vision. But it had been a human shape and even in the moment of passing it he had known it was not just drugged or drunk. Now why was that? The limbs, of course, the way they stuck out. Inside the ragged clothes it must have been swollen, probably lying there for days.

“You don’t go back.” The driver leaned to the speaking tube. So he
had
heard.

“I thought it was a human duty,” said Quatermass.

The taxi’s worn engine roared and they bumped faster over the pot-holes. Perhaps the man had seen immediately what Quatermass was slower to do, that the body was far past aid. He was younger. Better sight, quicker grasp.

Just the same, a corpse lying at the side of a suburban main road, left to decay—!

The breath jolted out of Quatermass’s lungs. The taxi thumped across scattered rubble. He managed to hold on to a grab-handle. He glanced out and in the reflected light from their headlamps saw the remains of yet another street barricade.

Burned-out cars. One had evidently been something expensive, a Lagonda or Lamborghini or the like, that Quatermass had never aspired to.

“I did not indulge myself,” he had written in his memoirs, “because I simply had no time. In a larger sense my whole life has been indulgence. I did what I wanted to do.”

Memoirs were an indulgence as well. Sitting there writing in the manse, facing south over the loch where the sun, when it happened to shine, beat up refreshingly off the water. Picking over the past, re-running it all. Recriminations, proofs, apologies. Up at dawn after the brief sleep one needed, to set down what one had just remembered or dreamed: exhilarating moments of insight and invention, the old swamping horrors.

As one scribbled one slid into fierce arguments with people from another time. There they were making their long-gone technical points about fuel lines or gimbals, and one was always tempted to let oneself win because, bluntly, one had the pen.

It would go on until somebody looked into the room with a message, or perhaps a bowl of soup, and one found oneself staring at them blankly because they belonged to the present. Sour-tempered Maire. And then, sometimes, Hettie. He should have talked to Hettie—

“Hold on!” shouted the taxi driver.

More scattered rubble in the headlights. Oil drums. The taxi jarred against one and the thing barely moved. It must have been full of earth. That was the way they used oil drums in barricades, he had heard.

The driver ignored him and he clung as they rolled round another corner. They seemed to be on an elaborate route. The man must know where the worst barricades were. The no-go areas.

LONDON IS DEAD
! The words flashed in huge streaky letters on a wall.

So why come here?

That appalling journey from Scotland, was it only last week?

People clinging to the train everywhere, actually hanging on to the outside in hundreds. Sitting on the roofs. He remembered ancient film, newsreels before the war, of trains like that in India. But this was his own country. God alone knew why they were making for London. They had passed another train, also smothered with refugees, heading back. As they limped by each other some people fell off. It was said men had jumped from one train to the other, or had tried.

WHO DONE IT
? screamed more paint,
WHO BURNED ST. PAUL
’
S
? But it was old paint from a time when somebody might have cared. St. Paul’s had gone long ago, he knew that much.

No street lamps here, none at all. And the houses were wholly dark. But that was only to be expected at this hour of the night.

They swung round another corner.

The driver stamped on his brakes, sending the taxi skidding with locked wheels. Perhaps it was the rubble that saved them, jolting them to a halt a few feet from a barricade. This one looked solid. A pile of bedsteads, crates, railings, a wrecked van.

After a shaken moment the driver said: “That’s it. Out!”

Quatermass felt anger rising. He had struck so much irrational behaviour in the last few days.

“I can’t get no further,” said the man. “The studio’s just down the street. You can walk it.”

Quatermass opened the door. Somewhere beyond the barricade there was a glow of lights. That could be the place. Unless the taximan was just setting him adrift.

“And you want your fare?”

Quatermass found his battered leather case and got out. “No Cash Carried” said the notice on the driver’s door.

He slammed his gears into reverse and the taxi went screaming backwards along the street. Quatermass waited, half expecting to see it crash, but in a moment more it had turned and gone.

It was a mean street. Small Victorian houses, typical outer London. Nearly all the windows were covered with boards or corrugated iron. Once that would have been to keep squatters out. Now it was probably for protection. There might still be people inside.

The Good Sister by Jamie Kain
The Grip by Griffin Hayes
A Dragonlings' Haunted Halloween: Dragonlings of Valdier by S. E. Smith
The Search by Iris Johansen
Compromised by Emmy Curtis
Party at Silver Spires by Ann Bryant
The Melaki Chronicle by William Thrash
Stephanie Laurens Rogues' Reform Bundle by Stephanie Laurens
Meg's Moment by Amy Johnson
A House by the Side of the Road by Jan Gleiter
Our partner