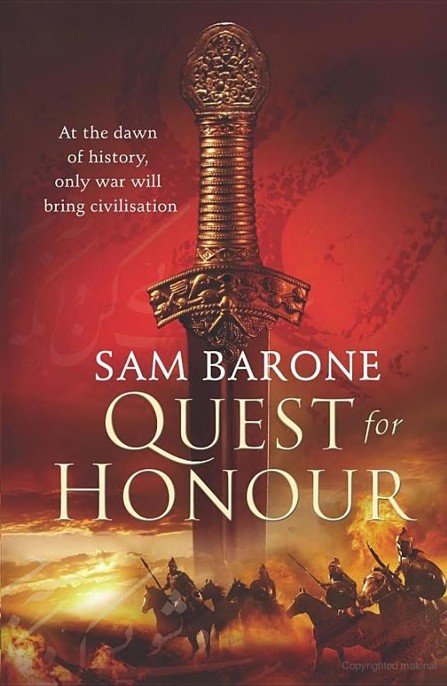 Book I – The Gathering

Published in the United Kingdom by Arrow Books in 2010

Previously published as a trade paperback under the title
Conflict of Empires.

Sam Barone has asserted his right under the Copyright, Designs and Patents Act, 1988 to be identified as the author of this work.

This novel is a work of fiction. Names and characters are the product of the author’s imagination and any resemblance to actual persons, living or dead, is entirely coincidental

First published in paperback in 2010 by Century

The Random House Group Limited supports The Forest Stewardship Council (FSC), the leading international forest certification organisation. All our titles that are printed on Greenpeace approved FSC certified paper carry the FSC logo. Our paper procurement policy can be found at:
www.rbooks.co.uk/environment

To all those warriors throughout the ages who fought honorably
for their country. And to Bill O’Reilly, a different kind of
fighter, but a culture warrior nonetheless.

Born and raised in New York, Sam Barone attended Manhattan College, graduating with a Bachelor of Science degree in 1965, with a major in Psychology. After a hitch in the Marine Corps, he became a software developer and manager. After spending nearly 30 years in the software development game, he retired in 1999 to start working on his second career: writing. Sam Barone is the author of
Dawn of Empire
and
Empire Rising
.

Book I – The Gathering

Y
avtar guided the sturdy ship through the swirling water of the Tigris, toward the Sumerian dock, now less than two hundred paces away, that marked the end of the voyage. On shore a crowd of idlers followed his approach, ready to note the smallest mishap. A portly man attended by two guards pushed his way to the forefront. As Yavtar edged the
Southern Star
ever closer, he observed the yellow sash tied across the man’s bulging stomach that marked him as one of the king’s representatives, most likely the dockmaster. Arms folded, the man reached the head of the last empty dock and stood there, awaiting the ship’s arrival.

For this important mission Yavtar had traveled day and night, racing downriver from Akkad to Sumer in less than four days. Now he almost regretted the haste, as he had to bring the
Star
ashore at midday, the peak of dockside activity. Since he hadn’t made a single stop along the way, this would be his first landfall in almost four months. A sailing master who spent more time on land than water soon lost his skills, so Yavtar swallowed his pride and muttered a prayer to the river gods to help him achieve a safe landing.

The
Southern Star
’s extra length – she stretched almost twenty-five paces from stem to stern – made her unwieldy in cross-currents. If he misjudged the current when he turned the
Star
toward land, the swiftness of the water could drive him downstream, stern first,
accompanied by laughter and catcalls from shore. Having to come about and pull upwards against the river’s flow would be a humiliating and slow arrival.

Yavtar gauged the moment, then leaned hard on the steering oar, forcing it against the current and almost broadside to the flowing water.

“Drop the sail!” he barked.

A crewman stretched out his arm and jerked hard against the restraining rope. The square linen sail slid down with a thud.

The four crewmen grunted against the sweeps, their bare feet straining for purchase. As the
Star
edged closer to the shore, the force of the river churned against the length of the hull. The vessel canted over as the pressure increased, and through his feet Yavtar felt the ship pitch up and down against the conflicting forces of water and oars. He caught a glimpse of his five passengers, huddled around the ship’s single mast, and clutching at it for support, their eyes wide with excitement.

The
Southern Star
began to swing around, and now the bow was less than fifty paces from the dock. For a moment Yavtar thought he’d waited too long. His hand twitched with tension, gripping the steering oar with all his strength, as the Tigris’s powerful current sought to roll the ship over and send the crew and their valuable cargo tumbling beneath the water. He forced himself to wait one more moment, then planted his feet firmly and pulled the steering oar in the opposite direction.

Spray splashed over the
Star
’s bow, and Yavtar feared she might roll over. An instant later, the river relented. As smooth as a leaf floating on the current, the ship glided alongside the dock, and slid gently into its berth with the slightest bump against the rope-wrapped stanchions. Yavtar allowed himself a brief smile. Despite more than two months since his last voyage, his eye still hadn’t lost the skill acquired in nearly thirty years on the river.

Two crewmen leapt onto the dock to secure the vessel fore and aft. The moment the
Star
stopped moving, the early summer heat struck down from the cloudless, blue sky like a hammer.

“Well done, shipmaster,” Daro said, joining Yavtar at the stern. “I thought we were going for a swim. At least you didn’t give those hooligans anything to hoot about.”

Fair Peril by Nancy Springer
The Witch's Daughter by Nina Bawden
The Wild Boys by William S. Burroughs
Bad Hair Day by Carrie Harris
I Should Be So Lucky by Judy Astley
Compartment No 6 by Rosa Liksom
The Understory by Elizabeth Leiknes
Code 61 by Donald Harstad
Beyond Wild Imaginings by Brieanna Robertson
Anita Mills by Newmarket Match
Our partner