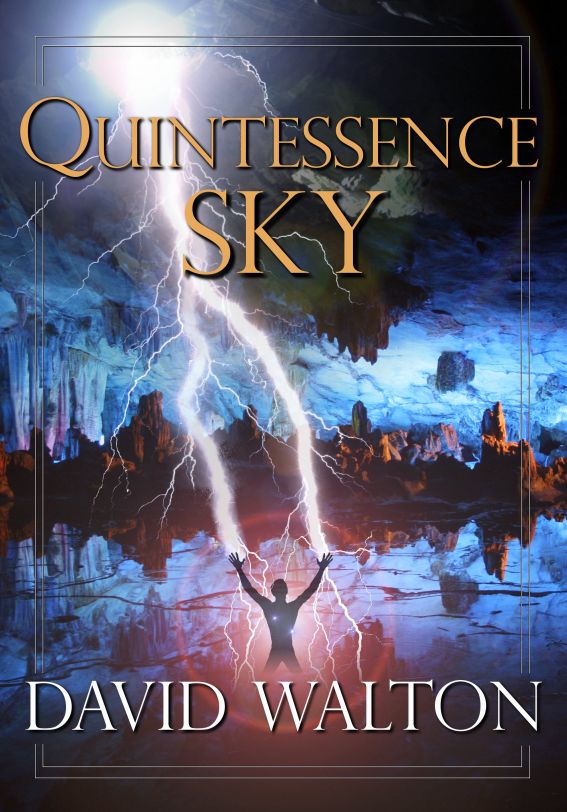 FATHER Ramos was sitting at his fireplace,
reading Copernicus, when the inquisitors knocked on his door.

It was generally his favorite time of the
day. His niece, Antonia, worked her embroidery in the rocking chair
across from him. The fire cast a warm glow through the room. The
crackle of burning wood combined with the soft scrape of porcelain
as Carmela, his old servant, straightened the kitchen.

Copernicus claimed that the world was not
round, as the Greeks had maintained, but flat, with oceans that ran
over the edge into oblivion, or else were held in by a lip, like a
giant bowl. He used the movements of the stars to defend his
position, and so far, Ramos had not been able to find a fault with
his logic. It was a revolutionary work, and he was enjoying it.

At the same time, though, he found it
unsettling. Cosmology was not just an intellectual pursuit; it had
spiritual implications. For more than a thousand years, the Church
had understood the Earth to be round, surrounded by a series of
crystalline spheres to which the heavenly bodies were attached,
first the moon, then the sun, then the movable stars, then the
fixed stars, then the angelic sphere, and finally, the empyrean,
the dwelling place of God. The spheres were perfect circles, as God
was perfect. If Copernicus was right, what did that say about
God?

At the sound of fists pounding on the door,
everyone in the room froze. Antonia's chair stopped rocking, and
her embroidery needle poised motionless over the cloth. Carmela
held her breath, one arm still reaching for a bowl, and darted a
frightened glance toward the window.

Unhurriedly, Ramos leaned forward and dropped
the Copernican treatise into the fire. He would find another copy.
It wasn't worth the risk that one of these brutes would see it and
recognize it for what it was.

"Antonia, please retire to your chamber," he
said, keeping his voice even.

Antonia was a sweet child, fourteen years
old, though she had seen more than her share of tragedy in that
short time. She was exceedingly pretty, with thick black curls that
flooded over her shoulders and down her back. There was little in
this world as guileless or innocent as she, but she knew enough to
fear the men who came knocking late at night. The muscles of her
neck and arms were rigid with fright.

Carmela, who had served as Antonia's
nursemaid since her birth, crossed the room and tried to take her
hand, but Antonia pulled away. She stood, heedless of the
embroidery that fell to the stone hearth.

"What do they want?" she said.

The pounding on the door grew more insistent,
and Ramos sighed. "Doubtless they wish me to perform some service.
Don't let it trouble your rest."

"What if you don't come back?"

"I am no heretic, child. I will return by
morning."

"Say your prayers for me, then," he said.

Antonia allowed Carmela to lead her away, but
at the last moment, she pulled away and ran back to him. She threw
her arms around his neck and kissed his cheek. "Be safe, Tío
Ramos," she said.

"Whatever they want, just do what they say.
Don't fight them."

She ran back to Carmela.

"Lie still on your bed and pretend to be
asleep," Ramos said. "If anyone comes in, don't open your
eyes."

True to his vows, Ramos had never married,
but God had seen fit to give him this child anyway, the daughter of
his brother Diego. Her mother was dead, and Diego had never been
the sort of man to care for a child. He had left Spain two years
ago on King Philip's orders, to engineer a marriage between the
king and Queen Mary of England. He had left Antonia behind, and
Ramos had taken her in gladly. Ramos thought it was just as well
for Antonia that Diego had not taken her with him. His brother had
never been a kind man.

"Open in the name of King Philip!" bellowed a
voice from outside.

Ramos stoked the fire to be sure the pages
were completely burned, and then walked to the door. He opened it
to reveal three men in crimson cloaks. The tallest of them, whose
hand was raised to strike the door again, scowled at Ramos.

"You should not use the king's name so
lightly," Ramos said. "King Philip is in England marrying a queen,
not here sending lackeys to knock down his humble servants'
doors."

The tallest one reddened. "We are the king's
voice and the king's fist," he said. "Treat us with deference, or
we'll have you put to the question, priest or no."

"By all means, your Excellency. Shall I kiss
your ring?"

"Or perhaps we'll question that girl who
lives in your house. I'm sure she could tell us some tales, if we
worked on her long enough."

Ramos bowed his head. These were petty,
vindictive men, and no good would come from antagonizing them. "I
am your servant," he said. "There is no need for threats." He
stepped outside and pushed the door shut behind him.

The inquisitor nodded pompously. "That's
better. Come along, then."

"Where are we going?" Ramos said.

FATHER Alonso de Valencia was waiting for
Ramos in the Catedral de Nuestra Señora de la Asunción. The
cathedral was a latticework of wooden scaffolding and stone arches
built on the foundations of an older church. It would not truly be
a cathedral until it was finished, many years hence, and became the
bishop's seat, but that did not stop its cellars from being useful
in the work of the Church. Valencia was about sixty, his skin dry
and taut around his spare frame. His smile was grim.

"It's good to see you, Ramos," Valencia said.
"The Lord has need of your service."

"You know what I think about what you do
here," Ramos said. "I'm an astronomer, not an inquisitor."

Valencia made a face like he was tasting
something bad. "I don't relish the work either. It's often
unpleasant, and it wears on the nerves. But it is important work,
necessary to cleanse the realm of Protestants and other
heretics."

"I won't help you torture someone," Ramos
said.

"This time, I think you will."

Valencia descended into the crypt, leaving
Ramos little choice but to follow. He would much rather have
climbed to the flat, stone roof of the transept, where he could
study the stars and breathe the fresh air, but he went down
instead, his footsteps echoing in the stone tunnel. The air was
cool but thick, and there was a stink of fear and blood.

The prisoner was no more than ten years old.
He was strapped into a heavy, wooden chair in the center of the
room. His eyes rolled back and forth, and he thrashed against the
straps. His chin was wet with spittle, and vomit stained his shirt.
Torches were arranged in such a way as to dazzle his eyes and allow
an inquisitor to approach unseen from behind. The chair itself had
holes in the back where sharpened screws could be slowly turned,
iron nails that could be heated from below by hot coals, and
attachments for a variety of other instruments of slow agony. A
rack stood against the wall as well, along with shelves of hammers,
pincers, vices, and blades.

"The boy is demon-possessed," Valencia said.
"He went into convulsions when we brought him down the stairs."

"His mind is sick, and he is terrified."

"You should have seen him, thrashing on the
ground and frothing at the mouth. The demons have driven him quite
mad."

"A clear indication that his parents are
Protestants," Ramos said.

"Or worse," Valencia replied, missing the
sarcasm, or else choosing to ignore it.

"What do you hope to gain from this? If the
boy is possessed, he's not under his own control. If you torture
him, he'll admit to anything. How will you know if he's guilty of
heresy?"

Valencia laughed. "The boy's guilt is
self-evident. Demons can not enter a Christian soul. No, as you
say, we need his witness against his parents. We need to know how
deep the heresy goes. It does no good to cut off the plant while
the roots remain in place to sprout again."

Ramos watched the boy pulling against his
restraints, and remembered the tall inquisitor's casual suggestion
that they might question Antonia. He felt sick.

"Just because he tells you something under
torture, doesn't mean it's true," Ramos said.

"It takes a special kind of man to extract
confessions," Valencia said. "Someone with patience and fortitude.
I am quite gifted at it, but I can recognize when others have
talents that I do not possess. They say you are very good at
casting the horoscope."

Ramos was not about to be flattered. "I am
the king's astronomer, professor of mathematics at the University,
and founder of the Holy Astrological Society. Clearly I am
competent."

"I wish you to cast for the prisoner."

"You're too modest. Think of it as helping me
know which questions to ask."

Ramos shook his head. He understood what
Valencia was asking now, but he still didn't want to be involved.
"I don't think . . ."

"It's an experiment," Valencia said. "If it
doesn't work, I'll just go back to doing it my way." He looked
pointedly at the instruments of pain arrayed around them.

Ramos bowed his head in assent. If he could
spare this boy from torture, or even just delay it a while, it was
worth the attempt. "I'll need paper," he said. "And plenty of
ink."