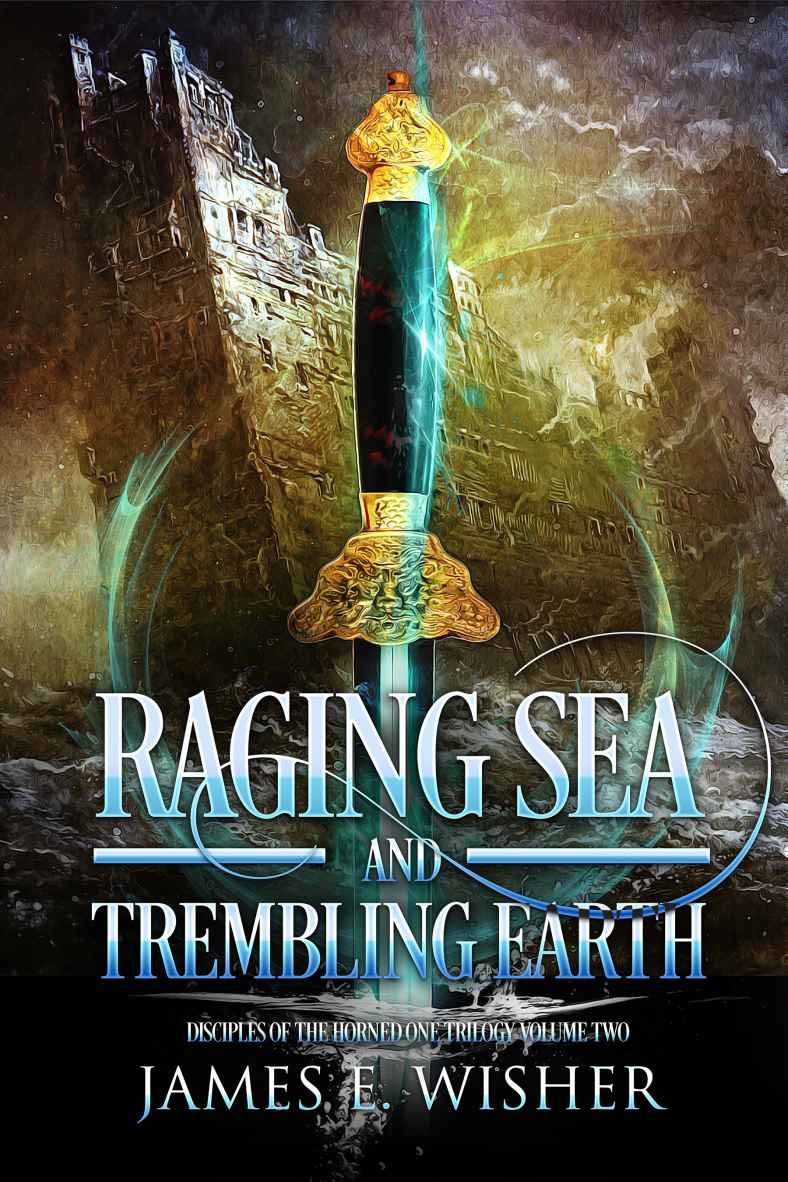 J
aden flew
through the beautiful blue sky along his patrol route, the wind whistling in his ears, his tan tunic snapping. Below him the vast expanse of the Western Ocean spread out as far as he could see in every direction, the blue-green waters broken occasionally by small, sandy islands or pods of playing dolphins. Silas, the other junior sorcerer stationed on Lookout Island, even claimed to have seen the serpentine shadow of the Leviathan once, but Silas lied so often that no one took him seriously.

Jaden had seen no sign of the mighty water dragon nor did he have any great desire to. The sailors who brought supplies and replacement warlords to man the fort spoke of the Leviathan the same way they did a hurricane. They considered it a force of nature rather than an aware creature that made rational decisions. Jaden didn’t know the truth and he suspected no one else did either. They couldn’t exactly seek the creature out and ask.

Today found Jaden on the northern patrol route. North a hundred miles, west fifty, then back to the island for lunch. The whole trip took about five hours. Master Soran had only begun to trust Jaden to make the patrol by himself in the last month.

He smiled, remembering how proud and nervous he’d felt when his master told him he could go out on his own. That had been a tense, exhausting trip even though he’d seen nothing more threatening than a breeching whale.

He paused to conjure a far-seer construct. It had taken Jaden a full two months of practice before he mastered the complex conjuring. Multiple, overlapping layers of soul force combined to mimic the effect of a spyglass, only much more powerful. Looking through his construct Jaden could see twenty miles out into the ocean like it was twenty feet.

Nothing lurked on the western horizon. No ships, no dragons, just endless blue, exactly as Jaden preferred. He let his construct collapse and continued his patrol. Twice more Jaden paused to study the horizon and each time he found it every bit as empty as the last.

What would the cook make for lunch today? Probably something with fish. The warlords spent most of their time swimming the clear waters with spears in hand. It was a rare day indeed when none of the ten men and four women brought anything delicious from the blue depths. Jaden only wished the cook’s skill equaled his father’s.

Jaden loved his quiet new life, but he missed his parents a great deal and couldn’t wait for his next leave in two months. Dad had promised to make all his favorites. Thinking about it made his mouth water as he paused for his next scan of the empty horizon.

Jaden shifted his construct from wide scanning to focused zoom. There, maybe forty miles out—four dark-hulled ships, their sails taut in the breeze. They came out of the west, from the direction of the Old Empire. In the 220-year history of Lookout Island no ship had ever been seen on the western horizon. The warlords and sorcerers assigned the post considered it either a punishment that kept them out of the real action or a reward that kept them out of the real action.

How could this have happened less than a year into his posting? Jaden dug through the satchel hanging from his shoulder. Master Soran’s call stick had to be here somewhere. Pawing through the random shells, polished stones, and other junk he’d accumulated, never taking his eyes off the impossible ships, Jaden finally found it. The thin piece of wood snapped easily in his trembling hands.

Master Soran arrived surrounded by a glowing aura and looking a bit out of breath. His long, wild white hair made the sorcerer look more like an island castaway than an expert soul force wielder. “What’s wrong?”

Jaden hadn’t looked away from the four tiny ships bobbing out on the waves since he’d broken the call stick. He didn’t now, afraid if he did they’d vanish like a mirage. Instead he simply pointed. “Ships.”

Jaden sensed his master conjuring beside him and a few seconds later he gasped. It sounded like he believed now. “What do we do, Master?”

Master Soran didn’t speak for many long seconds. When he finally did he said, “For now we’ll keep watch, day and night. They’re still weeks away from reaching the island and more weeks yet from reaching the kingdom. The ships may turn back or alter their course. Until we know something for sure we do our job and watch them. If they haven’t changed course within a week we alert the archmage. After that it’ll be for her and the king to decide.”

“At least there aren’t enough ships for an invasion,” Jaden said.

“No. More likely they sent an envoy who’ll demand we rejoin the empire and if we refuse the invasion fleet will follow shortly.”

Jaden swallowed. So much for this being an easy posting.

D
amien sighed
as he landed in the empty yard outside The Tower. Two feet of fresh snow forced him to conjure a platform under his feet or sink to his knees. Bright blue skies held a blinding sun that reflected off the white yard causing him to squint. Despite the light, the sun did nothing to relieve the bitter cold. Not that the chill bothered Damien. He’d surrounded himself with a pocket of warm air and little wisps of steam rose from his shield. To look at the clear sky today you’d never know two days ago it had been snowing three inches an hour. Damien found he missed the southern weather. He didn’t miss the bandits, poison, assassins, black knight, or corrupt barons. But the warm sunshine had been nice.

He strode toward The Tower doors, extending the platform ahead of him. One of the guards on the wall waved, looking miserable huddled beside an inadequate brazier. Damien returned the gesture. He’d gotten to know most of the guards during his time studying and they generally recognized him when he visited.

Damien had managed four days of rest before he couldn’t stand it anymore. The one small mercy of the past few days: Karrie hardly bothered him at all. She didn’t seem angry or anything, just distant. Maybe she’d accepted that he had no intention of marrying her. He hoped so. It would be a relief to go back to just being friends.

When he’d gone to the archmage looking for something to do she’d sent him to The Tower with orders to learn all he could about Connor Blackman. Damien had never been much for research. He preferred action. Still, he’d gotten comfortable in the library during his studies and a handful of days amid the stacks would make for a nice change of pace after all the running around and fighting. And it would be nice to see Eli, Amanda, and Ann again.

Damien used soul force to open the massive, black front doors and walked into the black and silver entry hall. He pulled the doors closed and turned toward the headmaster’s office. The tiny old man was expecting him. The archmage had sent a message detailing Damien’s mission and pending arrival so there should be no problem on that account.

A wave of nostalgia washed over him as he walked toward the office. Had it only been three and a half years since he first visited the now-familiar hall, a nervous kid with no idea what lay before him? The bench where he’d first seen Eli sat empty this morning. That boded well for him getting right in to see the headmaster.

Damien knocked and the office door swung open. The dry smell of parchment and ink rolled over him. The little man stood in front of his desk, a bright smile on his bewhiskered face. Damien had barely taken a step inside the room when the headmaster rushed over and grasped his hand, pumping enthusiastically. “Good to see you again, my boy. Sit down, sit down. Lidia told me all about your adventures down south. Remarkable, absolutely remarkable.”

The headmaster bustled around behind his desk and sat. His head stuck up well above the surface of the desk. Did he sit on a stack of books or use a special chair? Damien eased into one of the guest chairs. Even after three plus years it took all his willpower to sit in the presence of a master. He’d learned, however, that the headmaster wouldn’t relax until Damien took a chair so he did it as much for the older man as his own comfort.

“To think Connor Blackman would have resurrected the old Cult of the Horned One. That boy always did have an unhealthy fascination with the black arts. When he escaped after we discovered him experimenting with demonic artifacts I feared he’d come back to haunt us. But I never imagined something like this.”

Damien forced himself to interrupt the flustered master. “Sir, did you assemble the list of Connor’s yearmates?”

The headmaster shook himself, a little shudder running through his beard. “Of course, it’s here somewhere.” He rummaged around through myriad papers on his cluttered desk. Eventually he pulled out a crumpled sheet of parchment. “Here we go. Small class that year, only Connor and two others, Kat Gentul and David Weks. Both were good students and haven’t given us a moment’s grief. You’ll find their current assignments there as well.”

Damien accepted the parchment. “Thank you, sir. Did your researchers have any luck at the goblin lair?”

The headmaster harrumphed. “No. All their tests came back inconclusive. The only thing they learned for sure was that someone summoned the demon within the past ten years with primarily nonhuman sacrifices.”

“Mainly goblin and animal. Probably why the tribe was so small. Anything else I can do to help you?”

“If it’s okay and they’re agreeable, I’d like to borrow Ann and Eli to help with my research. I don’t know how much reading I’ll have to do, but two extra sets of eyes would speed the process along.”