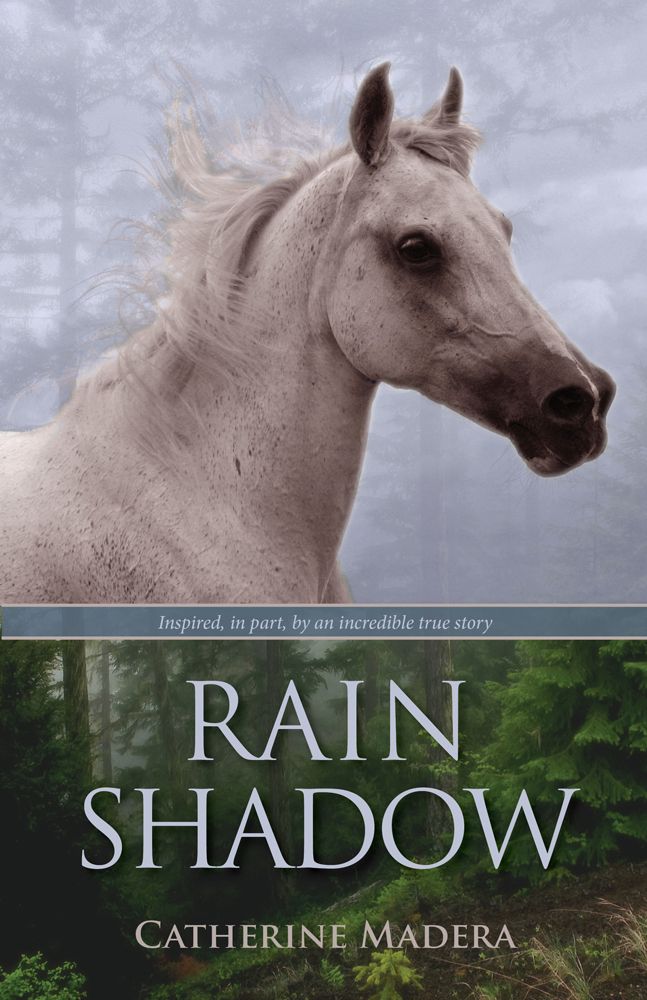 For ordering information, or to contact the author, please visit:

This is a work of fiction. In all fiction the literary perceptions and insights are based on experience, however, names, characters, places, and incidents are either products of the author’s imagination or are used fictitiously. No reference to a real person is intended or should be inferred.

For permission to reprint the photo of Hero, grateful acknowledgment is made to Emily Green, www.shadesofgreenphotography.com.

For my son, Nicholas

“We’re all looking for redemption;

just afraid to say the word.”

he mare followed at a distance. Twiggy undergrowth as tall as the saddle horn scratched at her on either side. Overhead a canopy of branches arched toward the sky from the broad trunk of a single, enormous maple tree. The late afternoon sunshine intensified its gold-edged leaves, a gilded warning that autumn approached
.

The man took no notice of the narrowing trail, striding onward with a purpose that contrasted sharply with the mare’s hobbling gait. The hitch in her step had deteriorated to a three-legged limp after only a few minutes of riding. When she could no longer bear his weight the man dismounted.

An edge in his voice made the mare’s ears prick up. She flicked them back and forth. The man walked to her side, unhooked the throatlatch and slid the bit quickly from between her teeth. The mare hung her head as he snapped a lead rope to the worn halter.

And so she followed him down the unfamiliar trail, stepping quickly every time he jerked on the lead, sputtering at face level spider webs.

Walking to the mare he pulled the latigo free, loosening the saddle. It was good leather, well worth saving. With a calloused finger he traced an imaginary triangle on the mare’s forehead and dropped the lead rope.

“Go ahead; git yourself some lunch, girl.” He backed up several steps.

The mare did not eat. She followed after the man, searching his body language for a familiar cue.

“Go on now!” The man raised his arms, flapping his hands at her. When she did not move he smacked her jaw with the heel of his hand.

The mare faltered. Slowly she lowered her head, allowing the grass to tickle her lips as they hovered over the earth. Her eyes followed the man.

He spoke soothingly, but the mare was not comforted. She watched his hand move to his hip and pull at the object hanging there.

“Ya
gotta make this hard,” he grunted. “Women always do.”

He slipped seven rounds into the cylinder. Seven was overkill. Only’d take one round, well placed. He backed up, aimed at a spot above the mare’s left eye, and pulled the trigger.

The stiff crack shattered the silence. Invisible life lurking in the bushes scurried away. The mare dropped her head, her legs buckling. Slowly, gracefully, she slumped to the ground as if laying down for a nap on a balmy day.

The man walked to her side and considered his handiwork. The mare had fallen on a small rise and gravity forced the oozing blood over her eye into a trail that ran down her neck and pooled near the shoulder. The man watched, fascinated, as the blood  brightened the mare’s most distinguishable feature, a large patch of rust-colored hair that stamped her otherwise grey body. It reminded him of a film in sepia tone that suddenly changes to full color.

The strange marking—now a rich magenta—had stood out as an anomaly from the moment of the mare’s birth. Like an upside down ice cream cone he’d thought at the time. The “cone” began, point up, at the wither and spread into a large uneven oval that extended over the shoulder. At first the marking had been part of the mare’s odd appeal. His friends were not intrigued.

“I got about as much use for them horses as I got for the friggin’ camel jockeys who bred ‘em.” Shaking his head, the man’s buddy
flicked a cigarette butt in the mare’s direction. He took a sip of Budweiser.
“Git yourself a real horse, Hombre. This freak of nature don’t fit the bill.”

Over time the man had come to the same conclusion.

He pushed at her shoulder with the toe of his work boots. He’d forgotten how much blood one round could make. The man stepped aside, wiping the heavy tread of his shoes on a spongy patch of grass. He felt a twinge of guilt. The mare had been a good horse. No arguing that. She’d had the most soulful eyes he’d ever seen on a beast. She
seemed to know his thoughts and wishes a split second before he expressed
them. Damn uncanny
.
Female intuition
,
he supposed.

But he’d tired of her in the way he tired of the women who wandered in and out of his life. High maintenance all of them. He pushed the guilt aside. No sense beating a dead horse. The man smirked at his private humor.

Fact is he’d given the mare a chance to move on, too. The ad in the paper had gotten one response, a young father looking for a horse for his daughter. But the mare turned up lame. Even without the hitch in her step they’d been critical of the marking.

“A-rabs say a mark like that shows some kind of favor—a special blessing.”

“They think their rag heads look good, too.”

And so they had passed on his mare. By then he was saving for a new horse. A Quarter Horse this time; bred in the good ole US of A. The man was not about to spend his hard earned cash to treat a female’s mystery lameness. Not his fault at all.

Satisfied the mare was gone, the man slung his saddle over a forearm in the gathering dusk and left by the way he had come.

Later, under the half light of a waxing gibbous moon, the mare stirred and staggered to her feet.

aylor pondered the wooden signage hanging above the door of the tiny grocery store. It seemed mildly threatening. Even if a friend lurked out here in the boonies she wasn’t looking for a reunion. There was only one friend on her list—her grocery list: Sara Lee.

Stepping from the safety of her car, Taylor adjusted the too-big waist of her olive green sweats. The surface of the blacktop glistened from a recent shower, glass-like in the sun that had broken gloriously through the clouds. An hour ago the world was a muted grey, indistinct. A great excuse for Salvation Army sweat pants. But it had only taken a moment for the surrounding countryside to be transformed as the sun reminded residents it was still summer. Jewel tones shimmered everywhere—emerald green pines; sapphire blue skies. Not far away the snow-capped head of Mount Baker was blinding. Pure white diamonds. Maybe instant makeovers were a specialty in Washington State. One could hope.

She plodded toward an enormous wooden door that looked as if it was lifted from the set o
f
Lord of the Ring
s
. Though the sign promised the mundane— “groceries”—it seemed like the sort of place one might barter for the eccentric. Magic bean seeds, for instance. Once inside, Taylor made her way down wooden floors so old and worn the grain was no longer visible. Years of log truck drivers’ heavy tread and farmers’ rubber boots resulted in a deeply grooved surface that suggested endless toil and the spirit of the rugged lives that sought nourishment within the confines of the store. The air smelled of musty herbs.

Taylor scrunched up her toes, feeling the grit under her flip-flops, and began scanning the aisles
.
Green olives, soup…. Where are frozen foods
?
There was something disconcerting about an unfamiliar grocery store. Who knew what was stocked there? Especially in this part of the country. Wheat grass and bean curd were probably standard fare; regular food with preservatives could be illegal. Like smoking. Another vice she was looking forward to horrifying healthy people with. In Vista, Taylor knew exactly where to find nourishment at the store. There was no floundering about, no need to buy an off-brand. Not that Sara Lee would be considered nourishment by everyone’s standards.

Finally Taylor located the frozen foods section, barely half an aisle long. She held her breath as she scanned shelves filled with orange juice, cheap ice cream, and whipped topping. There, next to a Hungry-
Man fried chicken dinner, was one beautiful coconut cream pie. Un-freaking-believable.

After locating her prize, Taylor wandered around the store. Cereal might be a good idea. She located the breakfast aisle and stared at the choices, first picking up a box with chocolate in the title, then some granola with flax. Whole grain or high fructose corn syrup? Choosing a cereal shouldn’t be this hard. In exasperation Taylor replaced the boxes and approached the check-out. On the way she picked up a six-pack of Corona, two limes, and a package of flour tortillas.

It took Taylor a moment to register the clerk’s question, her attention stolen by a huge jar of pickled eggs that perched on the counter between them. She stared, mesmerized, at the pale orbs that rocked
gently within a yellow, sulfurous liquid. The eyeballs of giants? Sasquatch
was known to be partial to the Pacific Northwest.

“Uh, yeah. That’s about it.” She nodded toward the items being bagged and waited for the clerk to ask for ID. Buying alcohol felt weird, even though she’d been 21 for over a month.

“Dinner of champions.” The checker chuckled, revealing a section of missing teeth. She bagged the beer without hesitation. “I’m Della. Haven’t seen you around. You new in the area?”

Taylor took extra time filtering through the contents of her small backpack. She wasn’t particularly interested in the clerk becoming the “friend” she met when shopping. Obviously employees took the store’s motto seriously.

As she drove home Taylor considered the grocery shopping experience. Another neon sign indicating she was in strange territory. In California, the closest Sara Lee coconut cream pies were down the street at a corner convenience store. The clerks there could have watched her being mugged without getting involved. They’d continue talking to each other in Hindi, or Spanish, or Chinese and calmly dial 911. If she was lucky.If, say, blood was involved.

Taylor drove east, toward the Mount Baker foothills and her brand new digs. Sure, it was far out, but the simple beauty of the place, the peaceful isolation, was irresistible. Bellingham would have been the natural choice, but Taylor felt drawn to call on the ad for a “Cozy-one bedroom house on herb farm. Find your spirit here.” If there was any hope in locating her spirit, it must be at the tiny yellow house with the overgrown  Honeysuckle. Taylor put down a deposit after the five-minute tour.

She drove down the drive slowly, waving at her new land lady, Rowan,
digging in a field of Echinacea
.
Rowan, Sage, Clover
.
In one week she’d met three people named after plants. That had to be a sign of some sort. Was it good or bad things that came in threes? She couldn’t remember. Rowan was eccentric, yes, but Taylor couldn’t imagine the woman fell into the category of bad luck.

Alias Grace by Margaret Atwood
Bellona (Part 1.5 of The Saskia Trilogy) by Aoife Marie Sheridan
Tall, Dark and Disreputable by Deb Marlowe
The Transfiguration of Mister Punch by Beech, Mark, Schneider, Charles, Watt, D P, Gardner, Cate
White Water by Oldfield, Pamela
The Decent Proposal by Kemper Donovan
When a Beta Roars by Eve Langlais
Garden of Dreams by Melissa Siebert
Revenge of the Bully by Scott Starkey
One More Kiss by Mary Blayney
Our partner