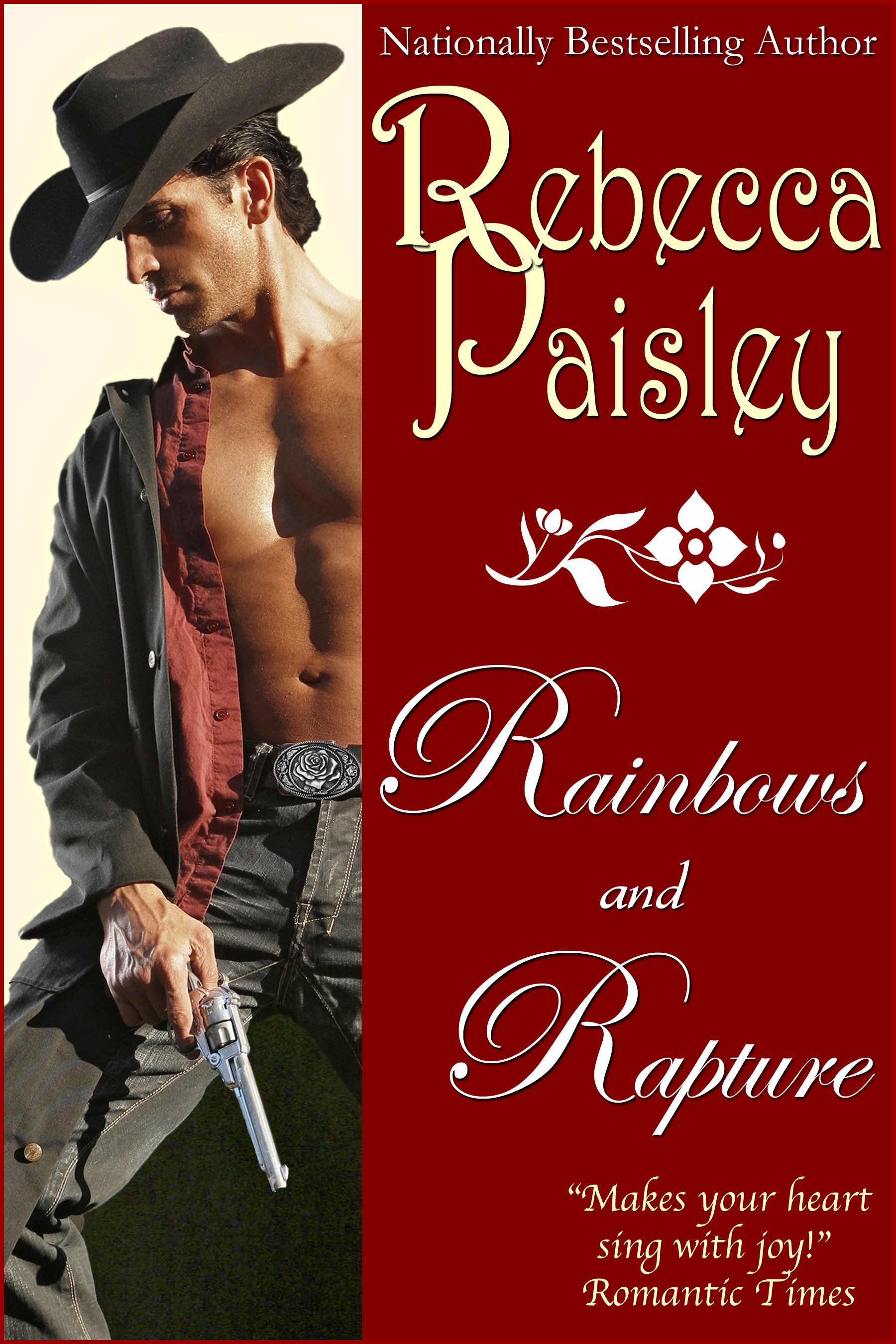 Rainbows and Rapture by Rebecca Paisley

Praise for Rainbows and Rapture and Rebecca Paisley

Enjoy these other delightful historical romances from AMBER HOUSE BOOKS

Rainbows and Rapture
by Rebecca Paisley

Does a delightfully innocent “soiled dove” dare to offer her heart of gold to a notorious gunslinger?

Russia Valentine is looking for a noble Prince Charming to make all of her happily-ever-after dreams come true. But when a hardened Texas gunslinger comes swaggering into the saloon where she works, she can’t resist falling beneath the seductive spell of his midnight-black hair and glittering obsidian eyes.

Santiago Zamora stopped believing in fairy tales—and happily ever afters—a long time ago. The last thing the reluctant bounty hunter needs in his life is a tart-tongued beauty who sings like a dying nanny goat, has a cat who insists on sleeping in his hat, attracts catastrophe wherever she goes, and makes his pulse pound with a dangerous desire he had hoped never to feel again.

When Russia tricks Santiago into helping her track the villain with the power to destroy all of her dreams, Santiago must fight the temptation to surrender to a spell of a different kind—one woven of passion and tenderness…and the irresistible hope that it might not be too late for him to find a happily ever after of his own—in Russia Valentine’s arms.

Praise for
Rainbows and Rapture
and Rebecca Paisley

“One of the most talented writers in the genre, Ms. Paisley is an absolute delight to read! Once you’ve read your first Paisley, we can guarantee it won’t be your last!”—
Historical Romance Writers

“Rebecca Paisley makes your heart sing with joy! Her talent shines brighter than any diamond. Historical romance at its best!”—
Romantic Times

This is a work of fiction. Names, characters, places, and incidents are either the product of the author’s imagination or are used fictitiously. Any resemblance to actual events, locales, organizations, or persons, living or dead, is entirely coincidental and beyond the intent of either the author or the publisher.

For anyone and everyone who has ever rescued an animal in need. For responsible people who spay and neuter their pets. For the big-hearted people who adopt when they can instead of buying. For each person who has ever performed the tiniest kindness toward an animal.

I give voice to all those animals now.

“Thank you, people. Thank you for caring about us. For doing whatever you can to make sure we get homes and love. Thank you for never giving up the crusade against Animal Abuse. For spreading the word that so many of us are forgotten or ignored and, sadly, eventually killed because no one came for us in our most desperate hour. We want to love people with no reservations, with the kind of love that only God could make us capable of feeling. We want to lick/kiss our special people and play with them and sleep with them and smile at them and be their Best Friends. We depend on you to continue watching over us and helping us to find our Forever Families. We might not all be fancified or perfect. But we are perfect in ways that defy any sort of name or description. We just need a chance. Please come and find us! You will never, ever be sorry. We love you.—The Animals.”

“I—Um… How was I, Miss Valentine?” the young cowboy stammered, clutching a pillow to his loins. His smooth cheeks coloring, he stood next to the bed and stared down at the most beautiful girl he’d ever seen.

Russia didn’t miss the anxiety in his blue eyes. Pulling the sheet over her breasts, she summoned her brightest smile. “Jessie,” she began, wondering how much she should charge him, “there ain’t no two ways about it. You’re the best man I ever had in my bed. Lord have mercy, y’got me so hot that, if I was a hen? Well, I’d be layin’ me some hard-boiled eggs.”

His astonishment touched her. She decided she’d ask him for only two dollars. “If I’m lyin’, may the sky open up and swallow me.” She glanced at the patch of Texas sky she could see through the small, cracked window of her cheap hotel room, and was relieved when she saw that the heavens didn’t appear to be opening up.

Her gaze returned to Jessie. Studying his youthful countenance, she guessed he was around sixteen years old and suspected she was the first woman he’d ever made love to. It had taken him all of one minute to complete the act, and if not for her help, it would have been over even sooner. But she didn’t feel a shred of guilt for lying to him about his sexual prowess. What would it hurt for him to think he was one of the world’s greatest lovers?

Reaching up, she smoothed a long, tapered nail down his thin arm. “Yeah, you was plumb nelly good, Jessie.”

He puffed out his gaunt chest, slid his fingers through a lock of her strawberry-blond hair, and bent to give her one last kiss. Smugness touched his boyish features as he began to dress.

“Much obliged for your comp’ny, Miss Valentine. I was a mite lonesome when I stopped here in Hamlett. I been travelin’ for near about two months. I’m on my way to New Orleans to see my ma. I ain’t seen her in five years on account of I’ve been in California with Pa. Pa was supposed to have sent for Ma when he’d made his fortune, but he never made it. He— Well, he died instead.”

Russia noted the tremble in his voice and the lone tear that appeared at the corner of his eye. She knew then that she’d charge him only one dollar.

“I stopped here in Hamlett to see if I could buy somethin’ nice for Ma,” Jessie explained, wiping his damp cheek on his shirt and tugging on his boots.

As he rambled on about his mother, Russia examined the condition of his clothes. His shirt was patched, his breeches threadbare. His socks were full of holes, and the soles of his boots were so worn down she wondered if his bare feet touched the ground when he walked. “There’s a mercantile in town that sells real purty bonnets,” she suggested, but knew in her heart Jessie didn’t have enough money to purchase one.

He slid his hat on. “Ma always wanted a cameo pin to stick on her blouse. Do ya know how much them cameo pins cost?”

The hope in his voice piqued her compassion again. She’d charge him only fifty cents. “They cost a lot, Jessie.”

He nodded and stared at the floor. “Yeah, well, guess I best be goin’ now. I— How much— What’s the charge?”

She almost smiled at the way he raised his chin, and knew full well he was trying to act the part of a man who was accustomed to doing what he’d done today. She wondered if he realized he was blushing again. “There ain’t no charge. Go buy your ma a present.”

“I said there ain’t no charge, Jessie.” She flung the sheet off and got out of bed, her hair streaking down to her pale thighs like red-and-gold flames. Donning a thin shift, she crossed the small room and took her ragged purse off the nail in the wall. After drawing forth a handful of money, she stared down at it. It was all the money she had.

She threw back her shoulders and returned to Jessie. “You take this now, hear?” she instructed him, thrusting the bills into the waistband of his breeches. “Ain’t much, but you can buy that cameo fer your ma now. It’ll have to be a small one, though.”

He fingered the money. “Miss Valentine, I can’t—”

“Meowin’ mountains o’ mucky mosquiter mummies, yes you can! I— Um… Y’see, Jessie, you was so damn good in bed, it’s only right that
I
pay
you
.”

She hoped fervently that he believed her. Truth was, though, she didn’t know what being good in bed eyen meant. She’d picked up the expression from a woman she’d met a few years ago. Because men liked hearing it, she used the compliment often. But men were all the same between the sheets. They all moaned and hollered and shook with what she assumed was some kind of grand ecstasy. So she moaned and hollered and shook right along with them. Men liked that, too.

But it was all an act. Oh, she’d heard from other girls in the business that pleasure was possible for the woman, but she’d never experienced anything remotely related to it. Because of that, she’d always figured it wasn’t all that important.

She smiled at Jessie. “Take that there money. By tonight, I’ll have doubled it.”

She glanced at the money, knowing it would take weeks to save that much again. “Could be I’ll triple it. Hell, maybe I’ll even ’druple it. ’Druple it? That ain’t right, is it? What’s that word fer when you four somethin’?”

“Well, then,” Russia continued, grinning at him, “let’s just say that by tonight I’ll be close to a millionairett. You know—one o’ them women with millions. A rich woman like me can sure afford to give a man like you some money to buy his mama a present, right?”

Jessie couldn’t speak past the lump in his throat. Instead, he looked into Russia’s eyes. God, they were incredible. One was pure blue; the other was green with shots of the same blue. He’d never known anyone with two different-colored eyes before. Then again, he mused, his own eyes stinging, he’d never met anyone as unusual as Russia Valentine, either. He decided then that her rare eyes and outlandish name fit her perfectly.

His misty gaze swept down to her full breasts. Swallowing hard, he shuffled his feet and knew in his soul that behind those beautiful breasts beat the heart of an angel. “Miss Valentine, I—I thought girls like you were…hard. You know—real harsh. I seen a few, and it seemed to me like they didn’t have any feelin’s at all. They—”

“I’m hard, too,” she quickly informed him. “So hard that I reckon if you kicked me in the heart, you’d break your toe. I— It’s jist that mamas shouldn’t have to go through life without no cameos sticked to their blouses. I had a mama once, too, and if she was still alive I’d git her a cameo. Now go on, hear? I got things to do. Lord, I’m busier’n a one-armed paper hanger with the hives durin’ strawberry season, and you’re wastin’ my time.”