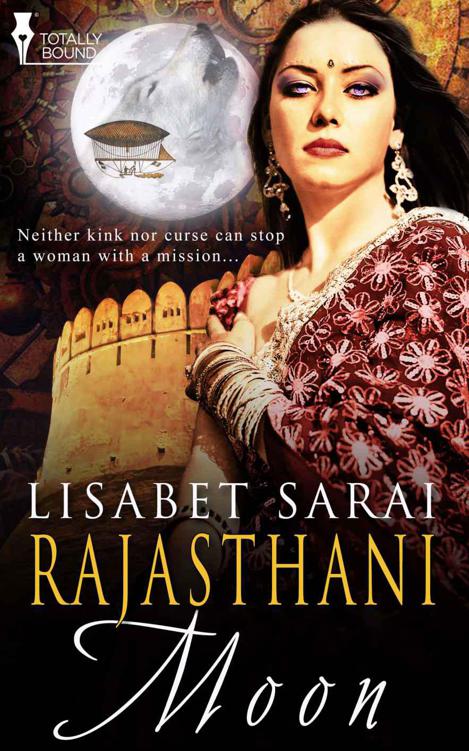 This book contains sexually explicit content which is only suitable for mature readers. This story has a
heat rating
of
Total-e-melting
and a
sexometer
of
3.

This story contains 145 pages, additionally there is also a
free excerpt
at the end of the book containing 6 pages.

Neither kink nor curse can stop a woman with a mission.

Cecily Harrowsmith, secret agent extraordinaire, is a woman on a mission. When the remote Indian kingdom of Rajasthan refused to remit its taxes to the Empire, Her Majesty imposed an embargo. Deprived of the energy-rich mineral viridium, essential for modern technology and development, Rajasthan was expected to quickly give in and resume its payments. Yet after three years, the rebellious principality still has not knuckled under. Cecily undertakes the difficult journey to that rugged, arid land in order to determine just how it has managed to survive, and if possible to convince the country to return to the Empire’s embrace. Instead, she’s taken captive by a brigand, who turns out to be the ruler’s half-brother Pratan, and delivered into the hands of the sexy but sadistic Rajah Amir, who expertly mingles torture and delight in his interrogation of the voluptuous interloper.

Cursed before birth by Amir’s jealous mother, Pratan changes to a ravening wolf whenever the moon is full. Cecily uncovers the counter-spell that can reverse the effects of the former queen’s hex and tries to trade that information for her freedom. Drawn to the fierce wolf-man and sympathising with his suffering, she volunteers to serve as the sacrifice required by the ritual—offering her body to the beast. In return, the Rajah reveal Rajasthan’s amazing secret source of energy. In the face of almost impossible odds, Cecily has accomplished the task entrusted to her by the Empire. But can she really bear to leave the virile half-brothers and their colourful land behind and return to the constraints of her life in England?

It would have been much faster to fly.

Alas, Cecily Harrowsmith—special agent for Her Majesty the Queen, expert in the martial arts of three continents, past mistress of princes, potentates and the occasional prime minister
—
was afraid of flying. She despised herself for this weakness, but not enough to board one of the Empire’s sleek, viridium-powered airships, strap herself into her seat and hope for the best.

Hence the current tedious journey. Cecily peered out of the window of her carriage at the endless expanse of russet-coloured desert stretching in all directions. The mere sight of all that sand was enough to make her throat burn. She sipped her tepid tea, wondering for the twentieth time why she’d accepted this bloody assignment.

For England, of course, and the good of the Empire. Her Majesty could scarcely afford to have her vassal states simply refuse to pay their taxes. When the Rajah of Jaipur had expelled Her Majesty’s tax collectors and declared his kingdom independent, the Queen had imposed a viridium embargo. No society these days could function without the energy-rich mineral. At least this was the theory. Yet the Rajah and his half-brother had held out for the past three years, despite being completely cut off from the Empire’s supply lines.

Cecily’s job was to discover how the isolated principality had managed to survive. She’d also been instructed to convince the errant rulers to return to the bosom of the Empire, if at all possible. If persuasion failed, she was authorised to use force. However, she doubted this would be necessary. Persuasion was after all her forte.

Once more she extracted the portraits of the twin rulers of Rajasthan from her portmanteau to study their countenances. Both had skin the colour of nicely browned toast. Amir, the official Rajah, was clean-shaven, with deep-set eyes, a prominent nose and lips as full as a girl’s. He wore his hair in European style but the rainbow-hued turban perched on his head as well as the loops piercing his well-shaped ears were more than enough to dispel any notion that he’d been anglicised. Pratan looked far less civilised, with tangled black locks reaching to his shoulders and a drooping moustache that gave him a permanent sneer. He shared his brother’s regal nose but his features were more angular, less finished-looking than his aristocratic sibling’s. Both men were strikingly handsome, each in his own way. The paintings provided little information about their figures, but, given the stark, unforgiving nature of their country, Cecily thought it unlikely that they’d be stout. With luck, their bodies would have the same masculine appeal as their faces.

With a sigh, she tucked the images away and settled back against the cushions. Cecily was a woman of action. The two-day journey from Bombay had sorely tried her patience. Miserable roads—cart tracks, really—had limited the speed of her private motorised carriage. She could have travelled many times faster on Britain’s macadam highways.

Nevertheless, she’d been glad to escape the superficial, conservative society of London—the falseness and the gossip, back-stabbing and double-dealing. Not to mention the dank weather and the horribly uncomfortable clothing. She knew how a tightly-laced corset accentuated her ample curves, but she far preferred native dress, especially in this kind of heat. She shook out the voluminous skirt of her
chaniya choli
, admiring the little mirrors sewn into the blue and orange print. The Rajasthani women wore nothing underneath and she followed suit. It was far more practical when one had to answer the call of nature out here in the middle of nowhere.

The quilted fabric brushed against her unprotected pubis, engendering a pleasant tickling sensation. Now there was an idea for passing the time… When she glanced outside again, she noted that the sun was lower. The land had become rougher and greener as they approached the foothills of the Aravalli range. Jaipur was located on the other side of the mountains.

She tapped one of the buttons on the polished wood control panel to her right in order to signal the driver. “How much longer before we arrive?” she asked in fluent Hindi.

“At least three hours, ma’am,” came the disembodied voice. “Not until after dark, I should think.”

After dark. That wasn’t good at all. Bandits tended to flourish in this sort of wild landscape. “Well, do your best to get us there as quickly as possible.”

Three hours. She checked the dagger strapped to her upper arm, well-hidden under her sleeve. When she made a fist, the knife shot into her hand, ready for use. Her Majesty’s engineers truly had no equal. There was a miniature pistol tucked into her waist as well, a marvel of workmanship no less deadly for its tiny size. These weapons would have to do. If brigands struck, she’d have no time to access the cache of armaments hidden under the clothing in her trunk.

Having satisfied herself that she was as prepared as possible for disagreeable eventualities, Cecily turned to more entertaining activities.

Digging deep into her satchel, she retrieved a leather-bound box the size of two decks of cards. Inside, embedded in red satin, lay an elongated egg of polished brass, the length of her thumb and twice the girth. She cradled the device in her palm. The viridium packed inside made it far heavier than it looked.

She pressed the button at one end. The ovoid erupted into buzzing life. After making sure the communicator circuit on the control panel was turned off, she raised her skirt and pressed the device against the plump, furred area at the top of her thighs.

The effects were immediate, and electric. Despite the indirectness of the stimulation, her quim grew instantly wet. Delicious sensation rippled away from the point of contact. She rubbed the brass egg up and down over her Venus mount, dipping a little lower each time—a little closer to the pearl of flesh peeking out more and more boldly from between her lower lips. That hungry bud screamed to be touched, but she held back, deliberately building the tension.

While her right hand teased her cunny, her left hand slipped under her midriff-length blouse to fondle her pillowy breasts. The skin there was like silk, defying the harshness of the Indian sun. She stroked her thumb along the sensitive outside curve, from near her armpit up to the taut tip. Her sex spasmed in response to that maddening, delicate touch. Aromatic juices seeped into the skirt below her bum. She drew tightening circles around her nipple. How long could she hold out before she pinched the aching nub?

Closing her eyes, Cecily summoned the visage of the Rajah. He licked his ripe lips then smiled, revealing perfect white teeth. A promising bulk distorted his satin pantaloons. His hands clenched into desperate fists by his sides. He was trying to be polite and proper, but she could read the lust in his eyes.

Take me
, she urged him.
I’m not some fragile virgin. You won’t damage me.
He reached for her, stripping her of her clothes, grabbing handfuls of her voluptuous flesh. First he squeezed her full breasts together, massaging them with strong fingers. Then he twisted her nipple hard enough to make her gasp. Before the echoes of pleasure had died away, he sank to his knees and drove two fingers into her soaked pussy.

That’s right. That’s the way.
The brass egg nestled deep between her sex lips now, directly in contact with her clitoris. Waves of sensation battered her, each more powerful than the last. She pictured the Rajah’s jet black head, buried between her thighs.
Oh yes
…

She wanted more, though. She needed more. Deep in her fantasy, she tugged on his hair to get his attention. He stood before her, his lean, muscular form inexplicably but delightfully naked. His erection pointed skyward like a ruddy sword. Wrapping one leg around his waist, she hoisted herself up then sheathed his cock in her hungry cunny.

Oh…!
Cecily thrust four fingers into her pussy as she imagined impaling herself on the Rajah’s hard member. Meanwhile, with her other hand, she ground the vibrating orb against her centre. Her pelvis jerking, she rubbed the device against her swollen tissues, desperate for release. Her delving fingers transmitted the tremors to her depths. The vibrations reverberated through her whole sex, amplified by her lewd imaginings.

She was getting close. A climax coiled in her belly, tighter and tighter, ready to strike. The Rajah lifted her off his dripping cock and flipped her over, onto her hands and knees. Digging his fingernails into her fleshy bottom, he drove back into her with a force that shook her entire body. There was nothing left of the cultured prince. He had become an animal.

“Aye…!” Cecily screamed as the combination of extreme stimulation and obscene imagery pushed her over the edge. She came in huge, shuddering convulsions, drenching her clothes and the cushions. Limp with pleasure, she twitched in the aftershocks.

The egg dropped from her nerveless fingers and rolled into a corner.

Then the coach lurched to a sudden stop, flinging her still-quivering body to the floor as well.