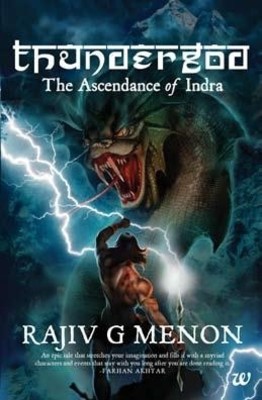 Before setting out on a writing career, Rajiv G Menon was an actor, occasional screenwriter, traveller and beach bum. A voracious reader since childhood, he was fascinated by stories and characters from Indian, Greek and Norse mythology. Thundergod was born as a result of that fascination.

The Ascendance of Indra

This book is sold subject to the condition that it shall not by way of trade or otherwise, be lent, resold, hired out, circulated, and no reproduction in any form, in whole or in part (except for brief quotations in critical articles or reviews) may be made without written permission of the publishers.

To my grandmother Sowdamini Menon,

for introducing me to the fascinating world of mythology 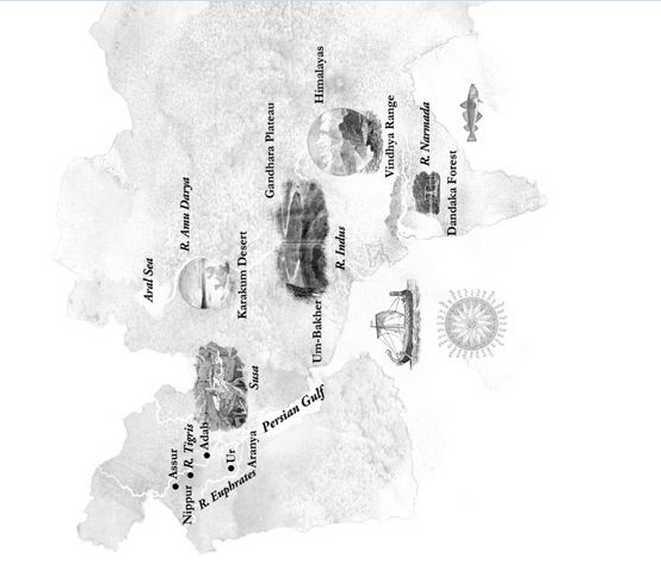 Nirmala Gopalakrishnan, my mother, for her unwavering trust and support in allowing me to pursue my passion.

My father, K.P. Gopalakrishnan, for inculcating in me my reading habit, a gift whose true value I have finally come to realise now.

Dimple, my wife and rock, without whose strength and support I would never be able to do what I do.

My son Vir, for asking the right questions; I hope someday he'll read this and agree that Indra is 'cooler' than Hercules.

Paul and Deepthi at Westland, for giving direction to my flight of fancy.

Sameer 'Daddy' Malhotra for, well . . . just being himself.

My friends and family--I cannot thank you'll enough for being there for me through the years. Lots of love and gratitude to you all.

It was a full moon night. Mount Meru stood out amidst the glistening summits of the mighty Himalayas, a colossal dark rock surrounded by snow-capped peaks. At the top of the mountain a man sat in deep meditation. The heat generated from his tapas had melted the snow off the peak. Around him a blizzard raged, the thick snowflakes struck his naked chest and melted away, sizzling. His face was calm, devoid of any emotion. He was completely oblivious to the fury of the elements around him.

In spite of the rigours of his intense meditation, his body was in extremely good physical condition. The thick muscles and the scars on his chest and arms revealed a martial past. His long, white hair and beard thrashed about in the stiff breeze. Suddenly something seemed to have disturbed him and a furrow appeared on his brow.

Deep in his subconscious mind, a vision had come to him.

It was a bright summer's day on a cliff face of red sandstone. On a tiny ledge a few metres from the top, a young peregrine took its first steps out of its nest. It balanced carefully at the edge of the precipice for a few seconds as it felt the breeze ruffle the feathers of its crest. Then with a screech of excitement, it launched itself into the void.

From the ledge, the father watched the little bird as it vigorously flapped its wings trying to slow its downward descent, then the panic settled and instinct took over. Its tiny wings soon found a rhythm and the little falcon began to fly. Before long it found a thermal column and began to soar upwards along with the rising air. The father watched proudly from his perch on the cliff face. He had lost his mate to a hunter's arrow a few days ago, and this had made him wary. Suddenly a glint of something shiny on the ground caught his attention. With a screech he swooped down into the trees.

On the ground below, a group of hunters drew their bowstrings, all attention on the young falcon. In a land where game was scarce, another hunter meant more competition for the limited resources. From the corner of his eyes, one of the hunters saw a shadow flit across the sky. He looked up and saw the adult bird drop like a giant arrow towards them. He shouted a warning to the others.

The falcon felt the trees come up rapidly around him as he brought his talons to bear. The hunters turned their attention towards the bigger bird and a volley of arrows crashed into it.

The falcon's body, wings still spread, crashed into the hunters and knocked a couple of them off their feet. Its talons caught one of them in the face and gouged one of his eyeballs out. The hunter screamed in agony, rattling the nerves of his comrades. The leader recovered quickly and shouted at the others to prepare for another chance at the young falcon. Suddenly, a giant eagle appeared. It placed itself directly in the path of their arrows as it swooped down on them. The hunters hesitated for one brief second, in shock. An older falcon protecting its young was natural, but in this harsh environment where prey was scant, they had never seen one species of predator rush to protect another. That split second was all that the eagle needed; it broke off its attack and disappeared above the canopy.

The young falcon now soared high, far removed from any threat from below. Even as it flew, it started to grow bigger and bigger. Its dark brown plumage started to change into bright gold. From below, the old male eagle watched in amazement as the young falcon grew and grew till it slowly began to eclipse the sun.

On the mountain, the man's head rocked back, his eyes opened wide, amazed at the clarity of the vision. Slowly, the man called Mitra gathered his belongings while he pondered over its meaning and made his way down the steep mountain slope.

Lit by the full moon and a million stars, the magnificent city-state of Susa shone like a jewel among the barren plains of Central Asia. Within its giant walls of sandstone lived twenty thousand souls, the greatest congregation of humanity in the world. The city was a marvel of its age, with its own water supply, sewage system, tree-lined avenues paved with cobblestones and beautiful gardens. These were interspersed with rows of stone houses in which the citizens lay fast asleep, completely oblivious to the omen that had shown up in the night sky above them.

In the middle of the city stood a gigantic structure that outstripped even the beautiful royal palace of Susa in its splendour. It was a magnificent ziggurat that reached out high into the heavens, a temple erected to honour Ishtar, the living goddess of Susa.

That night, Ishtar, daughter of the moon, stood atop her temple and stared out into the distance towards the northeast. One particular star caught her attention; it shone a little brighter than all the rest. Even as she watched, a tiny black hole appeared in its centre. Her beautiful face now wore a troubled expression as she saw the hole rapidly increase in size, till it engulfed the star and swallowed it whole. Ishtar opened her arms wide; her pale green eyes had a wild, vacant expression as she began to chant fervently. A glow started to appear in the middle of her chest, just below her beautiful breasts. Slowly it spread through her exquisitely-shaped naked body till it shone with an incandescence that could be seen for miles across the barren plains. It cast a warm protective glow over her adopted city.

A thousand miles away, in the direction of her gaze lay the Karakum Desert, one of the most desolate places on earth. A man and woman lay beside each other on a sand dune and stared up into the million stars that lit up the desert sky. The man brushed his long, blond hair off his face as he gazed up at the heavens. His features were sharp, almost perfect, as if chiselled from sandstone by a brilliant sculptor. Yet, closer examination revealed something in the deep recesses of those bright blue eyes, a certain wildness that made his countenance more fearful than attractive. His heavily-muscled torso, covered with numerous scars inflicted by shaft and blade, gleamed with a light sheen of perspiration.

Raja Daeyus, chief of the Deva clan, turned to the woman who lay next to him. Her beautiful face was tilted up to the starlit sky; her hair cascaded around her shoulders in a thick, dark cloud. She looked straight ahead, hugged her knees to her chest and rocked gently on her back. Her bronzed body, bathed in starlight, shone against the white desert sand.

Daeyus lay back on the sand and shut his eyes. He was glad to be alive. The last six months had been taxing to say the least. Yet they had more than accomplished their seemingly impossible mission and managed to put down most of the Scythian rebellion. Only one tribe, the Saka, still offered any semblance of resistance. Till about five days ago, the Deva campaign against them had been fairly successful. They had drawn the Saka away to the northwest and cut them off from their regular supply lines. Just when it had seemed that victory was finally theirs for the taking, their luck ran out. Daeyus and his men were caught in a violent desert storm.

For three days and nights the Devas waited. Crouched behind their horses, they prayed for nature's fury to abate. The sand was everywhere, in their eyes, their noses and their lungs. When they had just about reached the end of their tether, on the third night, just as suddenly as it had appeared, the sandstorm was gone. The desert was still again.

At dawn, Daeyus, along with his two commanders Vasu and Krupa, surveyed the situation. It was critical to say the least; their water reserves were long gone. In addition to this, the sand dunes had shifted, completely changing the topography of the land. They had no idea where they were or in which direction they should go to find water. Only of one thing they were certain: somewhere in the vast dunes, the Saka, the last and most feared of the Scythian tribes, lay in wait for them.

The Deva chief turned to the east, shut his eyes, and said a quick prayer to Surya, the Sun God. Just as he opened his eyes, he saw her, astride a huge black stallion, silhouetted against the rising sun. Her long, black hair and robes flowed in the morning breeze as she reined in her steed and indicated for them to follow her.

A captivated Daeyus threw caution to the winds and rode off behind the woman. For two days and nights the Devas rode behind their raja and the mystery woman. Although consumed by doubt, they did not once question his judgment or decision. They simply called upon their last reserves of strength and braved the scorching sun and sands. At long last, on the third morning, sunrise revealed the tall palms of the Oasis of Illum. Daeyus looked around for the woman, but she was gone.

The raja chose his campsite well within the tree line, so there would be no indication to anyone who arrived from the desert that the oasis was inhabited. The exhausted men watered and fed the horses and spent the hottest part of the day asleep in the shade of the trees.

Let's Be Mature About This BN by LaRuse, Renee
Rescue Heat by Hamilton, Nina
Twice a Spy by Keith Thomson
The Naked Prince by Sally MacKenzie
Possessing the Grimstone by John Grover
Santa Claus by Santa Responds: He's Had Enough.and He's Writing Back!
Romancing the Earl by Darcy Burke
Medical Detectives by Robin Odell
One of Those Hideous Books Where the Mother Dies by Sonya Sones, Ann Sullivan
The Sixth Commandment by Lawrence Sanders
Our partner