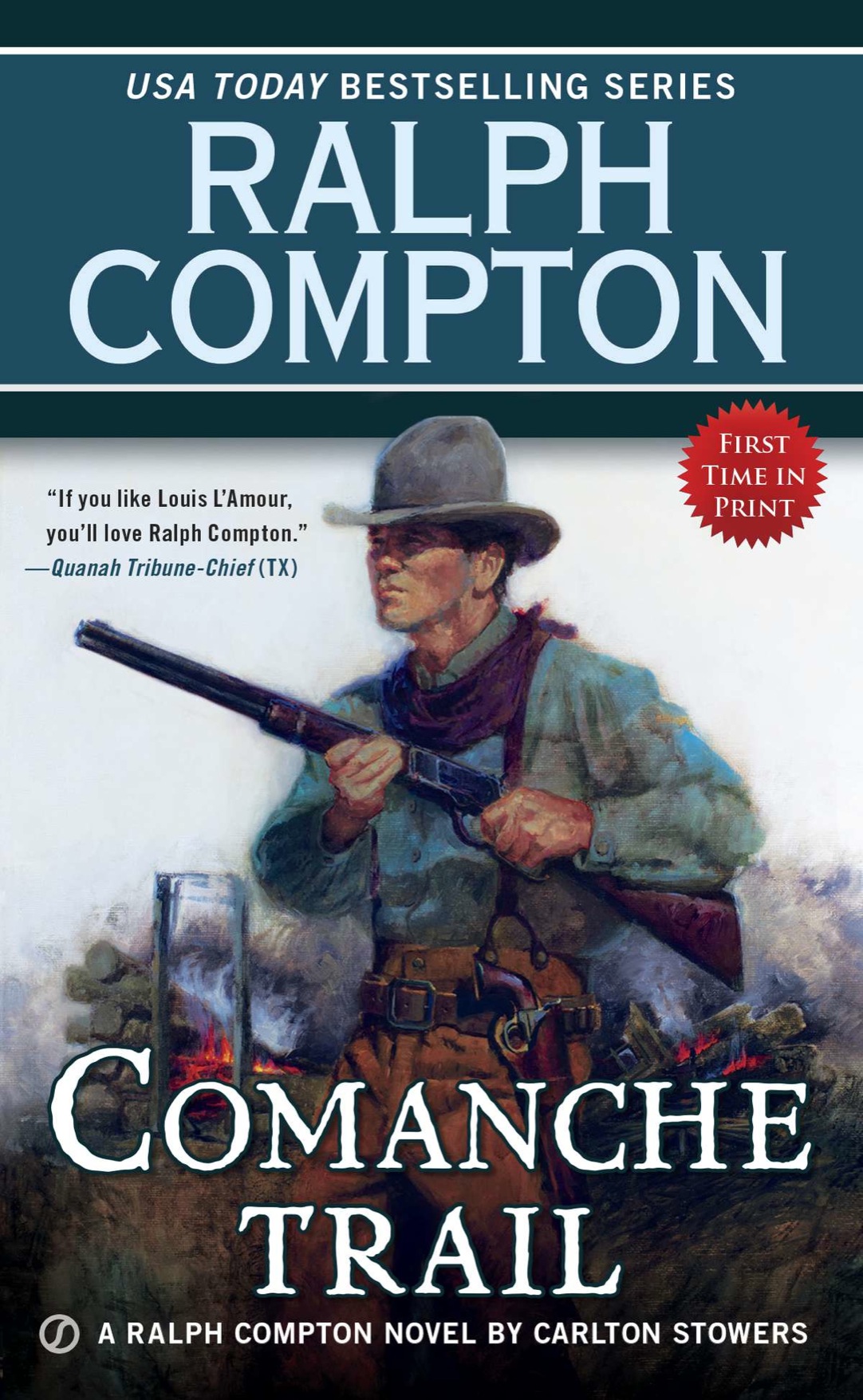 They kicked their horses into a gallop and rode through the entrance in single file until entering the small clearing. A short distance away they could see smoke rising from campfires. As they approached the circle of teepees near a steep bluff, they saw only a few women milling about. Only then did they realize that they had entered a box canyon with but one way in or out.

Barclay leaned toward Taylor as he brought his rifle to his shoulder. “Don't see no horses,” he said just as the first shot echoed through the canyon. The soldier in front of them slumped in his saddle, blood pouring from a hole in the back of his neck. The Indian women hurriedly disappeared into the teepees.

Two dozen Comanches, wearing full war paint and screaming battle cries, approached from the same entrance through which the soldiers had traveled. Instead of hiding in the rocks above, they had waited until the soldiers had entered the canyon, then followed, blocking the only exit.Â .Â .Â .

First published by Signet, an imprint of New American Library,

Excerpt from
THE DANGEROUS LAND

This is respectfully dedicated to the “American Cowboy.” His was the saga sparked by the turmoil that followed the Civil War, and the passing of more than a century has by no means diminished the flame.

True, the old days and the old ways are but treasured memories, and the old trails have grown dim with the ravages of time, but the spirit of the cowboy lives on.

In my travelsâto Texas, Oklahoma, Kansas, Nebraska, Colorado, Wyoming, New Mexico, and ArizonaâI always find something that reminds me of the Old West. While I am walking these plains and mountains for the first time, there is this feeling that a part of me is eternal, that I have known these old trails before. I believe it is the undying spirit of the frontier calling me, through the mind's eye, to step back into time. What is the appeal of the Old West of the American frontier?

It has been epitomized by some as the dark and bloody period in American history. Its heroesâCrockett, Bowie, Hickok, Earpâhave been reviled and criticized. Yet the Old West lives on, larger than life.

It has become a symbol of freedom, when there was always another mountain to climb and another river to cross; when a dispute between two men was settled not with expensive lawyers, but with fists, knives, or guns. Barbaric? Maybe. But some things never change. When the cowboy rode into the pages of American history, he left behind a legacy that lives within the hearts of us all.

There was a clean sweet smell to the predawn air as the man stepped from the cabin porch and walked toward the barn. Inside, his wife and children still slept, warmed by the fire he'd just stoked.

The time before the sun rose was his favorite, the autumn solitude broken only by the sounds of early-rising birds. With the soreness of his muscles relieved by a night's sleep, he contemplated another day's work. He would feed his mules, milk the cow, and spread grain for the laying hens before the aroma of biscuits and brewing coffee lured him back to the house. Then there would be wood to cut, the field to till, and repair of a wheel on the wagon to be tended.

In the year and a half since they had arrived from Arkansas and staked their small claim, the work had been hard, the harsh frontier environment a daily challenge. But now times were better. He'd finished building the cabin and barn, dug a well, and removed rocks in order to plow a small sandy loam field where stands of corn and grain were beginning to flourish. The family, like so many other ambitious pioneers moving west, had begun to feel they were home.

He was emerging from the wide doorway of the barn, milk pail in hand, when he saw shadowed movement in the nearby stand of trees and heard the impatient pawing of unshod hooves. Even as he dropped the bucket and raced to get his rifle, the clearing filled with a dozen mounted Comanches, their faces lined with war paint. A yell was followed by the leader's first wayward shot, which struck the wall with a loud thud.

The farmer kneeled behind the wagon and returned fire as the horsemen moved in his direction. A round smashed into the chest of the nearest attacker. As the Indian fell from his horse, a volley of return fire ricocheted through the barn.

With only the interior darkness for cover, the man was trapped as the attackers began to circle the building, their war cries growing in volume.

Inside the cabin, his family was wakened by the shouts and gunshots. His wife directed the children to hide beneath the bed, then raced toward the front door where her husband's pistol hung. She had just taken it from its holster when the door swung open and a bare-chested form filled the entryway. Holding the gun with both hands, she closed her eyes and squeezed the trigger. A rifle fell from the hands of the Comanche as his face turned red with blood that gushed from one eye.

Even as he was falling, another stepped over his body and shot the woman. From the barn, her husband heard the screams of his children. He left his makeshift fortress and raced toward the house. A hail of bullets and arrows struck him and he fell forward after only a few steps. He managed to get to his knees, dizzy and gasping for breath, before one
of the raiders kneeled beside him and drew a knife across his throat.

The Comanches dragged the bodies of the woman and children into the yard and laid them beside the man. Then they pillaged the two small rooms, collecting the few items of value they could find. That done, they lit torches from the fireplace and set the cabin on fire. Across the way, others had led the two mules and the cow from the barn, spread coal oil from the farmer's lantern, and set the building ablaze as well.

Angered by the deaths of their own, the savages scalped the man and woman, then set about mutilating their bodies. The Indians formed a circle around their victims and began to chant their war cries as they repeatedly shot arrows into the remains. The children were thrown down the nearby well.

Then, with their two fallen warriors lashed to the stolen mules, the Comanches rode away as black smoke curled against the rising sun.

No neighbors were close enough to hear the gunfire or the death screams. It was the smoke that alerted the dead man's brother, whose cabin was on the other side of the valley. By the time he arrived, his horse lathered in sweat, only smoldering ashes remained.

When he found the tortured bodies that lay in the dusty yard, he fell to his knees and retched. He searched frantically for the children, fearful that they had been abducted. Only when he saw the girl's rag doll near the well he'd helped his younger brother dig did he know where to look. What he saw as he peered into the cool darkness caused him to let out a pained cry that echoed across the valley.

He dug through the ashes of the barn and found a charred
pick and shovel. With them he dug graves in the shade of the nearby trees.

He knew no words to say once his work was done, so he stood alone in the morning silence, his tears a final farewell to the only kin he had.