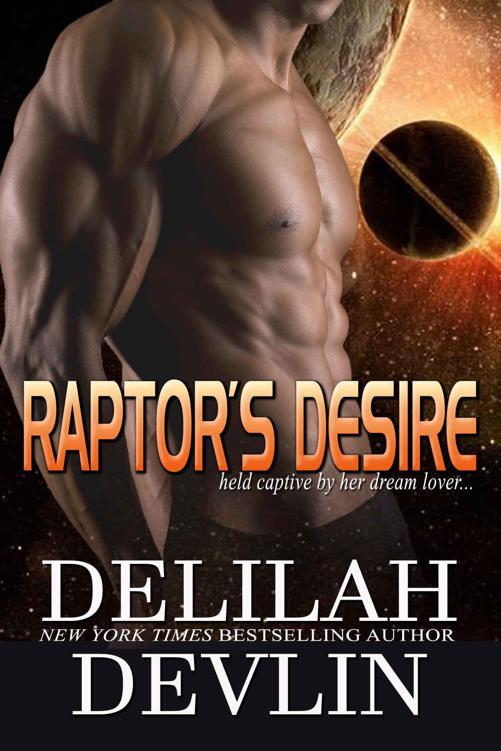 In the Planet Desire universe

After a month-long sleep filled with dreams of a dark-skinned lover in a glass castle beneath the sand, Captain Andromeda O’Keefe awakens in her suspension chamber to discover her dangerous cargo has escaped. Worse, naked and at his mercy, she learns her sexy, forbidden dreams weren’t hers alone.

Khalim Padja of the Raptor Clan has a date with a prison cell. Using his dream-share gift, he invades the wary captain’s dreams to seduce her. But time is running short to win her heart and his freedom.

Check out the other books in the
Planet Desire
series:

I
dreamt of
him. My dark warrior.

He pulled me from a deep REM cycle with the force of his summons. Now, standing with my toes sinking into heat, I found myself on a ridge of shifting sand—red as Mars and as hot as the fury of his gaze. And I was naked. Again.

Rays from an orange sun beat down on my skin. Wind lifted my hair and brushed it against my nipples. Even knowing he was angry, my stomach tightened, and my breasts grew heavy with desire. His hard, golden-eyed gaze raked my body, pinning me like a rabbit between his namesake’s talons. And yet, I yearned to thread my fingers through his long, dark hair and drag his mouth toward mine. He had taught me to crave the taste of his lips.

“I shouldn’t be dreaming,” I said, breathless with anticipation of what new sensual wonder we would explore.

“Are you?” His deep voice rumbled, and yet his lips didn’t move. He stood as still as a pillar, naked as I was. Aroused.

“I must be. How else am I here with you?” Emboldened by the thought that within my dream I was free to explore my fantasy, I reached to touch his face. He didn’t move as I brushed his sun-warmed skin and feathered a light touch over his high cheekbones and sharply defined nose. My fingers paused at his mouth, and then I swept my thumb over his lower lip and pressed inside. The tip of his tongue stroked my finger, and I gasped, imagining its moist heat teasing the hardening points of my breasts.

His expression didn’t change, and his gaze didn’t leave my face as though gauging my responses. The calculating gleam in his golden eyes gave me a moment’s pause.

“If this is a dream, then why don’t you give me what I seek?” he asked. “What harm would there be?”

My hands fell to his shoulders and I kneaded the muscles there, fascinated by his strength. “If I tell you, you won’t call me back to you.”

“Do you think your password is all I desire from you?” His gaze swept over me, scorching me everywhere it paused—my mouth, my breasts, my belly, the juncture of my thighs.

Heat licked at my loins, and my glance fell to his erection. “No, but surrendering to you would give you power.”

“I would not abuse that power any more than I would abuse the gift of your body.” A strong hand lifted my chin. His steady, hypnotic gaze seemed to pull me closer and made me flush with warmth. “Have I caused you pain? Haven’t I fulfilled your fantasies?”

I ignored his questions, knowing my blush colored my face and breasts. He had taught me to find pleasure centers in my body I’d never known existed. “I’ve watched you, while you sleep in your suspension chamber.” The admission was difficult even knowing this wasn’t real—
he
wasn’t real. Unable to meet his stare while I confessed my intrusive behavior, my gaze dropped to his broad, bronzed shoulders.

“I wondered if your body is as powerful as it appears.” Hesitantly, I smoothed my palms over his warm, lightly furred chest and felt the muscles beneath my hands spasm. “Am I only dreaming your body is this incredibly hard?”

He wasn’t unaffected. His chest rose and fell more quickly now. I was pleased my touch inflamed him as well.

With my hands, I measured the breadth of his shoulders and followed the thickly corded muscles of his arms downward. “You’ve led me, invoking my responses each time we’ve met, but this is my dream. I would know if everything is as hard as it appears.” I noted his hands clenched at his sides, and I smiled up at him. “Will my touch break your control? You’ve teased me, lured me to the edge, and left me wanting. Can
you
resist
me
?”

I spread my hands on the defined ridges spanning his taut, narrow waist. Then I glided downward, curving my fingers to rake the silky arrow of hair that broadened to frame his immense manhood.

As I encircled his cock, his head fell back, and his jaw clenched. Feeling powerful, I stepped closer to press my aching breasts to his chest and slide my tongue along the crest of his shoulder. He smelled of exotic incense and warm, musky man. My hands glided up and down on his smooth, hard cock.

Suddenly, with a movement that left me gasping, his hands closed around my waist, and he lifted me high. I was exultant. Now, he would come inside me. Now, I would learn the promises his body had hinted at—if only in my dreams. I clutched his shoulders and wrapped my legs around his waist, and he lowered me, impaling my moist flesh.

I moaned, and his mouth curved into a grim smile. His hands shifted to my buttocks—but he held me still while my vagina dampened in anticipation of a vigorous coupling.

“Why won’t you move?” My body ached for fulfillment, and I tightened my inner muscles around him.

“Your password.” He clenched his teeth. “Give me what I want, and I will finish this.”

The request jarred. But I was so lost in my flaming need, I ignored the warnings clamoring in my mind. “This is my dream, my mind. I command you to take me.”

His eyes narrowed, and his hands were hard, steel bands anchoring me to his hips. “Do you?” His expression challenged me to prove myself.

I faltered, and a prickle of unease crept up my spine to lift the hairs on the back of my neck. Khalim Padja of the Raptor clan, a Tirrekh warrior and the man embedded in my body, was a murderer and a traitor to the Dominion. But what else might he be? Was he somehow making this dream happen?

He’d been brought aboard my small transport ship, a cargo so precious and dangerous the governor of the outlying fortress had refused to hold him long enough for a military transport to arrive. I’d been promised a fortune to deliver him to the Dominion courts, and I’d assured the governor that Khalim’s suspension chamber would hold him safely.

Before I’d slept in my own chamber for the duration of the month-long journey, I’d inspected his, and checked to be certain the sleep inducements would last. But I’d been unable to resist a thorough inspection of his body as he lay inside.

I was a woman who’d spent too many months alone aboard my ship in deep space, my imagination my only company. And his body was beautiful. What harm would there be to look and stroke my hands over his still flesh?

And I had, much to my shame.

But this dream was too vivid. Even for the elaborate fantasies I often built to while away the days and weeks of my travels. His scent, his warm skin, his hard hands. His cock that stretched me—achingly.

“I’m not dreaming, am I?” I asked, afraid of the answer and his knowing smile, and ashamed of my body’s creamy response. My lips trembled, and his gaze fell to my mouth. I closed my eyes.

“No. You’re not dreaming.” His mouth descended on mine, and I was lost to his mastery. His firm lips pressed mine, and his tongue stabbed between my lips, sweeping over the roof of my mouth, gliding along my tongue, inciting me to suck.

I moaned, and my traitorous body released a fresh wash of liquid arousal.

He growled deep in his throat, and his hands squeezed my ass and lifted me, and then pushed me down—moving me, finally, up and down his thick shaft.

Mindless now, I threw back my head and clutched his shoulders, my nails digging into his skin as I climbed the precipice. “Don’t stop,” I begged. “Please, harder.”

His body shuddered between my legs, and his hips joined our dance, working in contradiction to the hands that directed my hips, pulling out as he lifted me, thrusting deeper as he ground my pussy down his length. Deeper, harder, faster—until I shattered. My long, keening cry ripped through the stillness around us.

When I opened my eyes, my head lay upon his shoulder, rising and falling with his ragged breaths. Drowsy, sated, I was less afraid and less believing, because I’d never experienced such depth of passion in my life. I smoothed my cheek on his warm skin. “If this isn’t a dream, then what is it?”

“A possession. You are mine.”

Irritation cooled my body. I unwrapped my legs from his waist, and he lowered me until my feet sank into the sand. Although my knees trembled, I fisted my hands and stepped away from him. “I’m no man’s possession. This hallucination ends now.”

“The choice isn’t yours.” His words, not spoken, echoed around me, inside me.

I pointed my finger at him. “You’re my prisoner.”

He folded his arms over his chest. “Am I?” Again, a small, mocking smile curved the corners of his lips.

“Damn you and your questions! I won’t let you change the course of this ship. I’ll never give you my password,” I cried out, angry and frightened. Surely this was only a nightmare. “Leave me.”

The sun glinted behind him, a corona so bright I raised my arm to shield my eyes. When I opened them again, he was gone, and a hawk perched upon my arm. The bird sat so calmly, I wasn’t alarmed. “Is this a trick?” I shouted over the endless red peaks.

The bird stirred, drawing my attention. His golden, unblinking gaze held mine for a long moment.

“Are you his, as well?” I dared to lift my hand and stroke the brown and black feathers on his head. “Such a proud creature. You know you’re beautiful.” I stroked his chest, and the action calmed my heart. “I shouldn’t be dreaming. This is his doing, isn’t it?”

Andromeda O’Keefe choked. The aspirating tube had retracted, and she was drowning.

“You’re coming out of suspension too quickly,” a deep voice, disembodied, came from beyond her gel-filled capsule.

She opened hers eyes, blinking against the light shining down through the clear hatch of her chamber, and met a golden-eyed gaze. She recognized him instantly. Her prisoner was free!

She fought the urge to inhale more of the suspension gel and searched with her hands for the hood latch inside her chamber.

Before her hand connected with the latch, the panel popped, and the dark-haired man tossed back the hatch and reached inside. A large, rough-skinned hand slid beneath her shoulders, another beneath her thighs, and he lifted her easily from her warm cocoon to the cooler air on the bridge of her ship.

Andromeda sucked in air and gagged. He knelt to lay her on the floor. Once her chest quieted, she realized her predicament. She was naked and wet, lying on her back with her prisoner, Khalim Padja, also naked, and standing over her. He held out his hand, palm up. Not an offer of aid. His implacable expression demanded she accept.