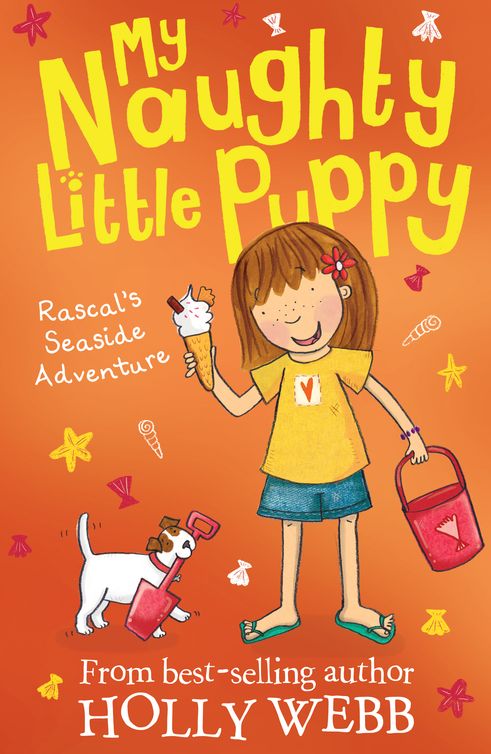 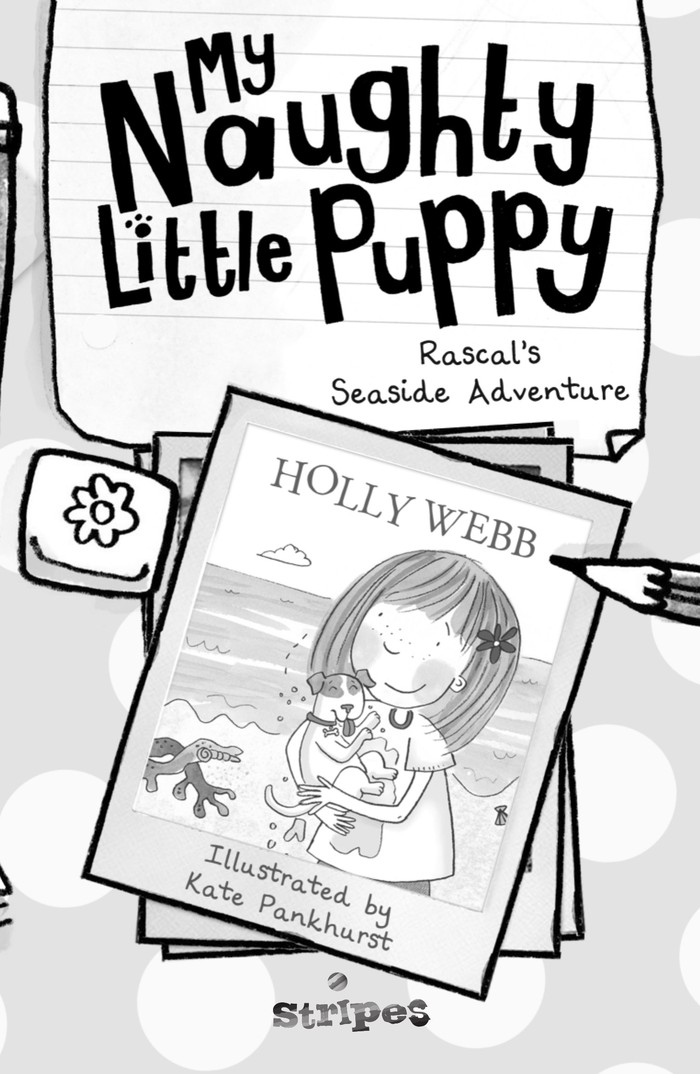 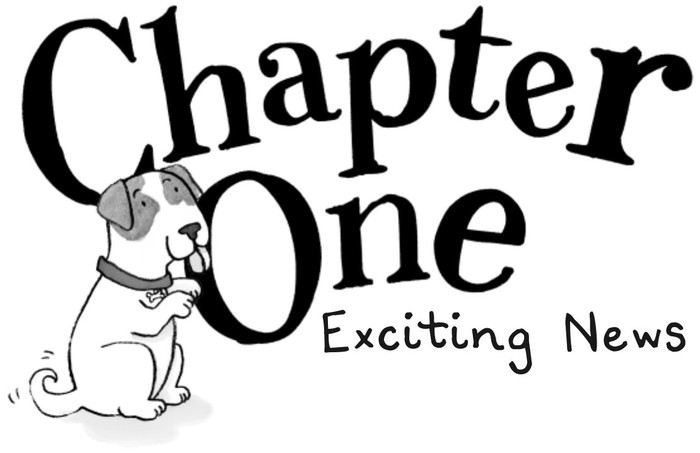 “Off the lead trainingâ¦” Ellie murmured, looking down at Rascal and chewing her bottom lip. He was in a very bouncy mood this evening, and so far he'd tripped her up in walking to heel, and managed to snatch the whole bag of dog treats she'd brought to give him if he was good. She'd had to borrow some spare ones from her friend Jack. Jack's enormous Great Dane puppy, Hugo, was looking quite annoyed.

Reluctantly, Ellie undid Rascal's lead. They hadn't been doing off the lead work for very long, but Rascal had been starting to get the hang of it. He just didn't seem to be in the mood to behave todayâ¦ She glanced anxiously over at Dad. Dad gave her a thumbs up, and Ellie tried to look confident. Their instructor, Jo, was always saying that if they were nervous, their puppies would pick up on it and be naughty.

Rascal wagged his tail happily as Ellie unclipped his lead. They were supposed to be practising recalling the puppies, so Ellie let him wander off to weave in and out of his big friend Hugo's legs, and then called, “Rascal!” 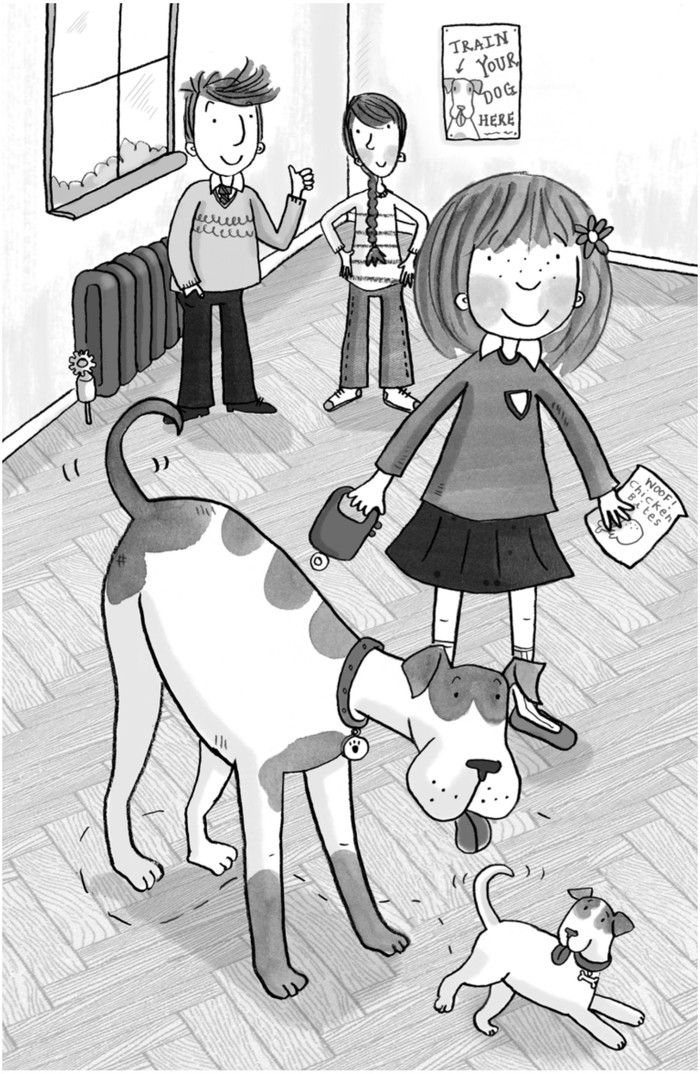 She smiled with relief as Rascal turned immediately, and pattered back to her, looking hopeful. “Good boy!” she told him happily, giving him one of Hugo's treats. “Well done!” Just then, Ellie noticed out of the corner of her eye that Amelia, who was in Year Six at her school and was always rude about Rascal, wasn't doing so well. Her pretty little spaniel, Goldie, had got into a scrap with one of the other dogs, and was completely ignoring Amelia. Ellie tried not to look smug as she sent Rascal off again.

Then she put her hand to her mouth in horror. They'd taken Rascal for a run round the park before dog training â Jo had suggested they always did that, so the puppies could do a wee before they came
into the class. But obviously Rascal had had a lot to drink today. He was looking around thoughtfully in a way that Ellie recognizedâ¦

Ellie blushed scarlet and rushed over, but she was too late to stop Rascal lifting his leg against one of the big old radiators that kept the village hall warm in the winter. He left rather a large puddle, and Ellie could hear Amelia sniggering behind her. 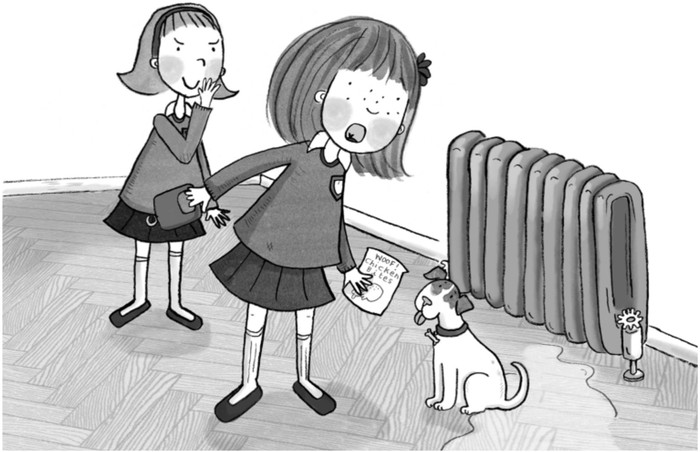 Ellie nodded, crouching down next to Rascal so as not to see everyone else giggling. “Oh, Rascal,” she muttered. “And we were doing so well!”

“Don't worry, Ellie. No one minded,” Dad said soothingly, as they walked home, but Ellie still felt embarrassed. When was Rascal going to become one of those perfectly trained dogs, like Jo's golden Labrador, Emma?

They let themselves into the house, and Rascal raced into the kitchen to see if anything had magically appeared in his
food bowl since he last looked.

Mum, Lila and Max were sitting at the kitchen table, and Mum had paper and a pen in front of her. She was clearly making one of her “lists”, and Ellie sighed. Mum liked lists, but they always meant lots of work for everyone else.

“So you need to make sure that any clothes you want to take are in the basket, so I can get them washed before it's time to pack. Oh, you too, Ellie.”

“Pack for what?” Ellie asked.

“We're going to Gran and Grandpa's! Gran just rang up and said it was definitely OK!” Max told her excitedly.

“Really? Brilliant!” Ellie beamed. Their grandparents lived by the sea, in a little
town called Green Bay. It was a proper old-fashioned seaside place, with gorgeous sandy beaches, a pier and the best fish and chip shop ever. “Hey! It'll be the first time Rascal's been to the seaside! I bet he'll love it. When are we going, Mum?” 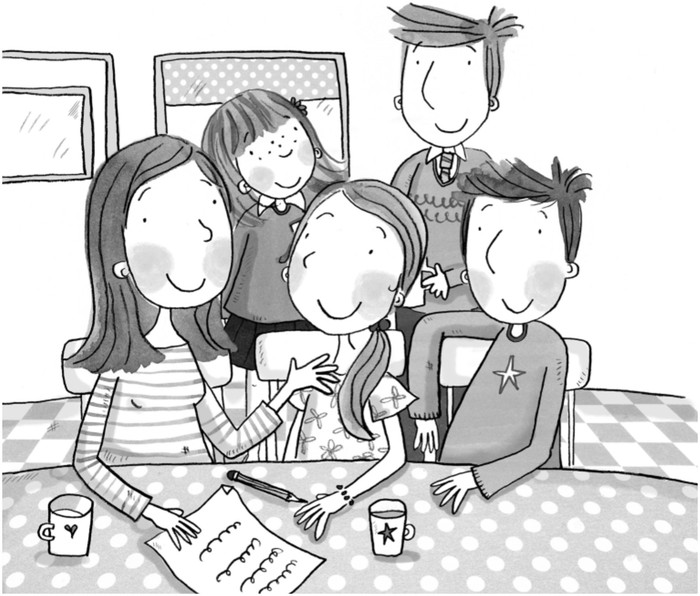 “The first week of the summer holiday â so straight after you break up from school at the end of the week,” Mum said, but she was looking worried. “Ellie, I'm not absolutely sure we're going to take Rascalâ¦”

Ellie stared at her. “But we have to! We can't just leave him behind.”

“No, of course not, but he might have to go to kennels. You know how fussy Gran can be â she worries about the mess you and Lila and Max make, let alone a puppy.”

Ellie felt like crying. She had been imagining showing Rascal all her favourite places in Green Bay. Maybe he'd even want to go in the sea with her! “I don't want to go without himâ¦” she said, her
voice all sniffly. “Please, Mum! He'd hate being in kennels, away from all of us.”

“I know.” Mum got up and gave Ellie a hug. “I'll talk to Gran about it. After all, Rascal's so much better behaved now, isn't he?Was he good at training tonight?”

Ellie swallowed, and glanced over at Dad. “Well, most of the timeâ¦” 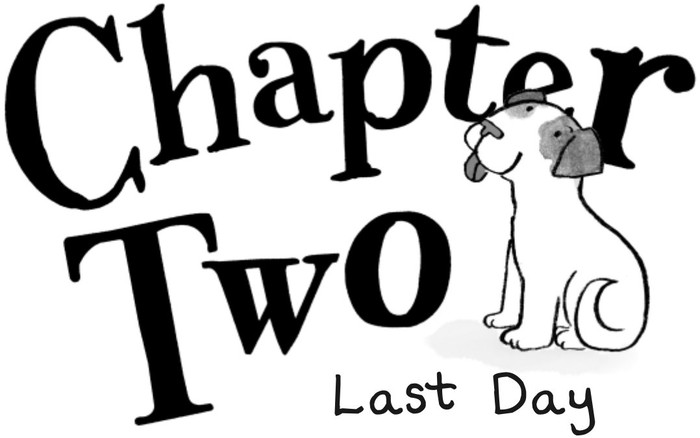 Mum was still really unsure about taking Rascal on holiday, especially after Ellie had told her about him weeing during dog training. She'd phoned Gran, and they'd talked about it for ages, while Ellie had sat on the stairs listening, and watching Rascal rolling over and over down the hallway with his squeaky bone. He was so cute â how could Gran not love him?

Ellie told her best friend Christy all about
it as they waited in the playground for the morning bell on Friday â the last day before the holidays.

“Mum said that Gran's agreed, but she's still really not keen on having a puppy to stay, so we'll all have to make sure he behaves,” she explained. 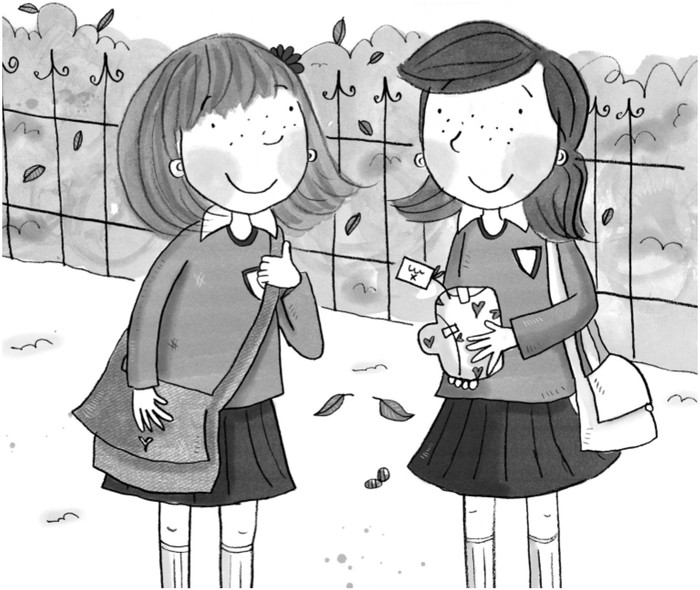 Everyone was tearing round excitedly, making sure they all had phone numbers for meeting up during the summer. Ellie, Christy and their friend Lucy had clubbed together and bought a lovely mug with dogs on for their teacher, Mrs Harley, who liked dogs too. They were going to give it to her at the end of school.

“I bet your gran will like him when she gets to know him,” said Christy.

Ellie sighed. She hoped so, but she just wasn't sure. Gran was one of those people who always looked perfect â her hair was styled like she'd just come out of the hairdresser, and she never, ever spilt anything on her clothes. Her house was the same â always tidy, with a lot of small and
very breakable china ornaments dotted around. It really wasn't the best sort of place to take Rascal. “She's just not a dog personâ¦” Ellie said. “But at least we'll be out on the beach most of the time, so he won't be getting under her feet.”

“Actually, that's a good idea,” Christy agreed. “Why don't you take him for loads of long walks along the beach? That way, he'll be too tired to be naughty.”

Ellie smiled. “Good plan, and I'm going to try and get him to come swimming with me. That'll definitely wear him out. Jo said that Jack Russells usually love swimming. I'm just so glad Gran said yes in the end. He would have hated going to kennels, and I'd really miss him!”

Christy nodded. “Bouncer's going to stay with my uncle when we go away to France. We did send him to kennels once, but he was really grumpy when we picked him up. He went down to the end of the garden and sulked for a whole day.”

Ellie giggled. Bouncer was Christy's gorgeous golden Labrador, and he was so happy and friendly that she couldn't imagine him having a strop.

“You're really lucky getting to take Rascal with you,” Christy said enviously. “You'll have such a good time.”

“I should think Rascal would probably tear a boarding kennel apart,” Ellie said, shuddering. “He'd be banned from kennels for life!”

There were already bags and bags piled up in the hallway when Ellie and Max got home from school, and Mum was looking a bit harassed. “Hello, you two! Ellie, I've just looked in your room, and you haven't even started packing! You do know we're going early tomorrow morning, don't you?”

Ellie nodded. “It's OK, Mum, I'll go and do it now.” She stuck her school bag in the cupboard under the stairs â she didn't even have to think about school for six whole weeks! Then she raced upstairs to pull out her suitcase from under the bed and decide what she was taking.

Rascal dashed up the stairs after her,
although it took him a bit longer â his legs were a lot shorter than Ellie's, and he had to scrabble for every step.

“Oh! Sorry, Rascal!” Ellie came halfway down again to pick him up. “I'm just really excited about going on holiday! I mustn't forget to pack for you, too. Your dog-bed, and your bowls â we'll take the nice ones I painted for you; I want to show them to Gran. And lots of food and dog treats and your toys.” She frowned. “I hope Dad's remembered he'll need space in the car for all your stuff, and you in your pet carrier.”

Ellie's suitcase was full long before she had fitted in all the stuff she thought she'd need, and then Mum pointed out that she hadn't packed any pyjamas, and she had
to take everything out and start again. It took ages, and Rascal got bored halfway through and went back downstairs. At last, Ellie sat down on her suitcase, and just about managed to zip it up. 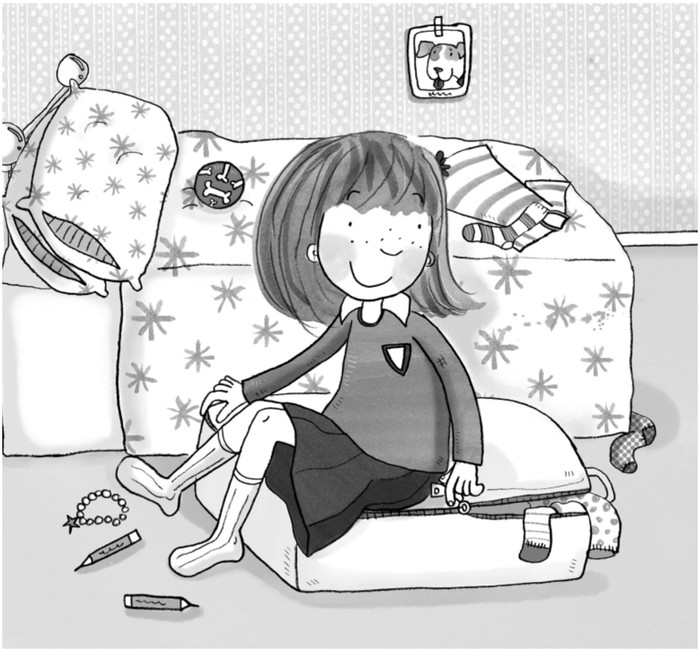 She sighed happily and eyed the pile of stuff that was still on her bed. Mum might not agree that it was better to take just one cardigan and fit in six books and her favourite pencils, but it would be OK if Ellie didn't tell her.

She raced down the stairs, making for the kitchen. She was sure she could smell tomato pasta sauce, and she was starving. But she stopped dead in the hallway, staring at the pile of stuff that was waiting to go in the car.

Rascal was curled up fast asleep inside Max's yellow fishing net. It probably still smelled of the crabs Max had used it to catch the last time they'd been to the seaside, Ellie realized as she went closer.
She didn't think Rascal had ever had crab â it wasn't a popular flavour for dog food. But he seemed to like it â or maybe it was just that the net was nice and chewy. At any rate, it now had several extra holes.

“Rascal!” Ellie cried. She had a feeling that her holiday money wouldn't last very long. There was no way she was going to convince Max that nets were meant to have holes that big in them! 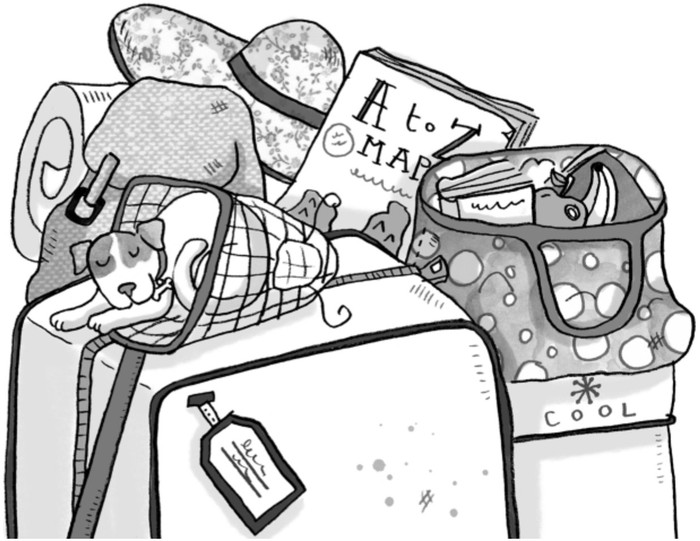 Horror Holiday by A. B. Saddlewick
Young-hee and the Pullocho by Mark James Russell
Ice Steam (Loving All Wrong #3) by S. Ann Cole
City of Fallen Angels by Cassandra Clare
Project Best Friend by Chrissie Perry
The Residue Years by Mitchell Jackson
Indonesian Gold by Kerry B. Collison
Will Starling by Ian Weir
Jacinda's Challenge (Imperial 3) by M. K. Eidem
FutureImperfect by Stefan Petrucha
Our partner