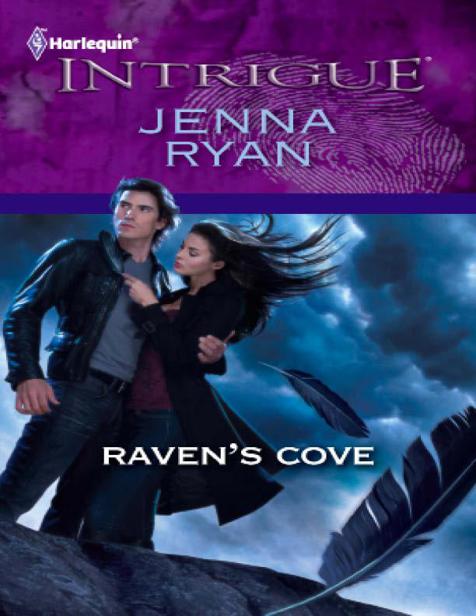 The reappearance of Rogan signaled she needed protection. They'd lived together for months in a safe house, her life in this mysterious detective's hands. Dark haired and heavyhearted, Rogan had allowed his and Jasmine's fates to be intertwined, just as someone from her past sought to kill her....

Rogan and Jasmine had ended their romance because of the danger it had brought. Now, if they hoped to stop the killer, they would have to revisit Raven's Cove, the birthplace of the ancient legend he twisted to suit his dark mission. And uncover the secrets still left between them....

There was no way to read his tone or his mood. But his eyes—now, those occasionally told a tale.

Blanking her expression, she turned. And immediately wanted to sigh. He had such a devastating half grin.

The touch of his fingers and thumb on her chin cautioned her to put some distance between them—as she should have done six weeks ago.

Was his mouth moving closer? Being around him, she let curiosity chase away good sense. She ran her own finger down the side of his throat to the shadowy hollow at the base. “Pulse rate’s up a little, Rogan.”

The man was gorgeous in a dark and dangerous way. Eyes that could weave a spell with a look, great hands, even better mouth…

She’d let herself fall under his spell at the safe house and again after the funeral. So why, with two mistakes to her credit, couldn’t she walk away and be done with him?

Jenna started making up stories before she could read or write. As she grew up, romance always had a strong appeal, but romantic suspense was the perfect fit. She tried out a number of different careers, including modeling, interior design and travel, but writing has always been her one true love. That and her longtime partner, Rod.

Inspired from book to book by her sister Kathy, she lives in a rural setting fifteen minutes from the city of Victoria, British Columbia. It’s taken a lot of years, but she’s finally slowed the frantic pace and adopted a West Coast mind-set. Stay active, stay healthy, keep it simple. Enjoy the ride, enjoy the read. All of that works for her, but what she continues to enjoy most is writing stories she loves. She also loves reader feedback. Email her at [email protected] or visit Jenna Ryan on Facebook.

Jasmine Ellis—
Her ex’s meddling combined with a three-hundred-year-old legend have put her life in jeopardy.

Rogan—
The rogue cop saved her from a drug lord, but can he protect her from a murderer who’s using an old legend to stalk her?

Daniel Cory—
Jasmine’s ex has endangered her life twice since their divorce.

Brent Boxman—
Jasmine knows him from her stint at a safe house, but why is he in Raven’s Cove?

Sergeant Costello—
He knows Jasmine is under threat. He also hates that he was forced to retire.

Victor Bowcott—
The safe house cop is in love with Jasmine.

Cyrus Bowcott—
Victor’s twin brother has as many secrets as the residents of Raven’s Cove.

Donald Dukes—
The chameleon cop disappeared. But is he dead or alive?

When lost and angry soul did meet,

That whispered low within the mist,

Of vengeance and false justice, hissed,

And twined until the soul, confused,

And willing to forsake his faith,

The darkness crept in, seized control.

Saw death descend upon the town.

Please help the one ensnared inside.

But darkness had its claws sunk deep,

Would not relinquish hold, would keep,

Brooked no escape to any shore.

Bright spirit heard but could not break,

Could merely transform man to bird,

And offer hope through cryptic word.

Can cause no harm, incur no death.

But feathers three placed on the door,

Means life within is destined for,

And with that knowledge, torment grows.

Yet on the day death gains no ground,

And though portended is not found,

Where feathers three by raven placed,

Should death be met and duly faced,

And conquered, then tormented soul,

Will freedom wrest from evil fold.

Unfettered soul may rise, move on,

Until that day shall raven fly,

The darkness call and people die.

Until the one is once more two

Jasmine heard the phone ringing as she undertook the complex process of disabling her condo’s security system. Always the way, she thought, and considered letting the call go to voice mail. But the door opened, her shoes slipped off easily and the violence of the thunder that had been circling Salem, Massachusetts, for the past hour had her longing to hear a friendly voice rather than the insidious whispers currently echoing in her head.

Those whispers wanted to draw her back to another place and time, just far enough away that she managed not to think of it every minute of the day. Only in darker minutes and thunderstorms.

She ran the last few steps to grab the handset. The spectacular bolt of lightning that corresponded with her breathless “Jasmine Ellis” flickered on through the “Ouch” that followed when her bare foot came down on a leather dog toy. A moment later, two large paws planted themselves on her chest and shoved her onto the sofa.

Laughing, she shoved back. “Hello to you, too, Boris.” She caught the dog’s chin. “If it took you this long to get here, you must have been sleeping on the bed again.”

Her three-year-old German shepherd barked twice. Meant yes, or in this case, guilty.

Still laughing, Jasmine dislodged his paws and returned her attention to the neglected caller. “Sorry—hello.” A prolonged crackle made her sigh. “Melvin, is that you?”

To his delight, her assistant’s seven-year-old son had recently discovered the snicker value in playing practical jokes. He’d called her twice last night to crinkle tissue paper in front of the mouthpiece.

“I can hear you breathing, kiddo.” Giving Boris’s ears a quick scratch, she shrugged off her black trench. “First rule of practical jokes, the same old, same old doesn’t work more than twice. …”

The crackle came again, so sharp she drew the phone from her ear.

A chill danced across Jasmine’s skin. She stood slowly, her eyes locking on the polished floorboards. “Daniel?” Then suspicion swept in, and she spun to scan the darkness beyond the living room window. “Who is this?”

“It’s me, Daniel, swear. The rain in Spain made our honeymoon a pain.”

Jasmine’s mind scrambled to decode his words even as she endeavored to block the horror-filled months that preceded his removal from her life.

Didn’t work, of course. The memories were simply too strong.

Daniel Corey was her ex-husband, emphasis on the ex. He’d been an investigative reporter who’d gone where he shouldn’t have, learned things he’d had no business knowing, escaped—barely—and dragged himself home. That’s when all hell had broken loose.

Life for both of them had become a carousel of safe houses, stringent security measures, pending trial dates, testimony and, in the end, for Daniel at least, the witness protection program.

Her role in the fallout hadn’t been as prominent, but that hadn’t made it any less terrifying. Because he had no other family, the people Daniel had crossed had seen her as his Achilles heel.

With several very real threats hanging over her, Jasmine had been followed day and night by undercover police officers for four long months. When that had been deemed insufficient, she’d been placed in a safe house for three more. Altogether, she’d forfeited over half a year of her life to Daniel’s dog-with-a-bone attitude. She didn’t intend to lose another day.

The rain-Spain-honeymoon thing was a password of sorts. Daniel had invented it should the need to contact her—which he was never supposed to do—arise.

Thunder sounded directly overhead, a perfect backdrop to Jasmine’s plunging mood. “Where are you?” she demanded, then slashed a hand through the air. “Scratch that. Why are you calling?”

Captain Gus Ballard of the San Diego Police Department had been at the heart of the case that Daniel’s unsanctioned investigating had brought to a highly explosive head. In short, and put very, very simply, one corrupt San Diego business magnate named Malcolm Wainwright, with ties to an equally corrupt South American magnate, both of whom possessed a network of people, weapons and criminal savvy, had been, if not destroyed, seriously damaged by Daniel’s findings.