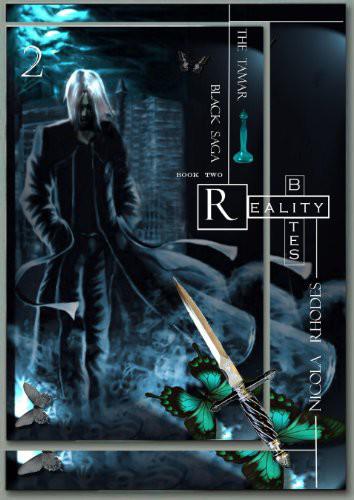 All rights reserved. No part of this publication may be reproduced, stored in a retrieval system, or transmitted, in any form or by means, electronic, mechanical, photocopying, recording, or otherwise, without the written prior permission of the author.

It lay in my computer files for a very long time while I wondered what to do with it. But someone wouldn’t let me give up …

For Mike – my wonderful husband.

Without you to constantly support, help, encourage, nag and believe in me, this book might have lain in my computer files for evermore and never been unleashed upon the world.  Thank you.

T
amar Black, former Djinn, current superhero was lurking.  Lurking, of course, is not your standard superhero behaviour, but Tamar was doing something that she knew in her heart she probably should not be doing.

Denny Sanger, her – for want of a better word – sidekick (Denny himself would certainly be none too happy to be described in those terms) would be furious when he found out, and would almost certainly have tried to stop her had he known what she was up to, hence the lurking.

Not that he would have been
able
to stop her, being a mere mortal with no powers such as those Tamar possessed, but he would have tried very hard to talk her out of it, and may very well have succeeded.

Denny was her former master from back when she had been a Djinn and old habits die hard, besides which, she had a lot of respect for him.  More than she had ever had for any other mortal.  It was because of him that she was no longer a slave of the bottle.

The current slave of what had been for several millennia
her
bottle (and who was, in fact, also the original slave of said bottle, and the one who had tricked her into to it in the first place) the former Djinn – former sorceress (don’t ask) current Djinn (again) and Arch Nemesis, AKA Askphrit, was the reason for the lurking.

When Tamar, with Denny’s help, had tricked Askphrit back into the bottle, and she had become human again, although retaining her Djinn powers because that had been the wish she had made (and how she had been tricked into taking his place in the bottle) and a wish cannot be undone, they had decided that he should stay in the bottle as punishment for what he had done to her.

And, of course, so that he could not cause any more trouble, by granting any more wishes.

Wishes always come with hidden consequences as Tamar, having been both a victim
and
a Djinn knew very well (which was exactly why she was feeling so guilty about the fact that she had just let Askphrit out of the bottle).  Oh Denny was going to be furious.

Askphrit was grinning hugely and lighting up the alleyway like an oversized firefly, thus completely ruining the whole lurking aspect of things.

Tamar ignored him as much as she could.  She took a deep breath. ‘I wish … and you can wipe that smile off your face – believe me, I know what I’m doing. And you’re
not
going to like it.’

Part One: The Darkness

One of them was wearing a long cloak with a large hood concealing the face; the other was a tall, thin man with an untidy beard and a tweedy look about him.  (He looked about as menacing as a librarian.)

He too, seemed to be trying to conceal his face by standing in the shadows, well away from the single candle burning on the table.  He handed the other a piece of paper.

‘I do not think you see as much as you think you do.  The purposes of the dark forces are not clear even to me, not yet.  However, he has a weakness that it may be useful for you to know about.’

‘It’s all in the information I have given you.’

The other read the paper briefly. ‘Oh.’

‘Yes, yes, I know, such manoeuvrings are distasteful, but it may be necessary.’

‘Do you indeed?’  The thin man stared hard at the other.

‘I should start at once?’

‘Yes, do you think you can find him?’

‘
Find
him at once? I’m not allowed to start by
looking
for him, then? – ’cause I can do that, but it draws attention.’

‘Risk it.  Find him at once, I said. Now remember no contact and he must not suspect you are following him.  Is that clear?’

‘You know my reputation.’

‘Indeed, good luck. I will contact you – soon perhaps.’

The hooded figure slipped silently from the room, and the other poured himself a drink from an elaborate decanter and sat down in an easy chair, smiling.  He had every confidence in his new friend.

D
enny was dreaming.  Actually, he was trapped in a hellish nightmare. Like all nightmares, it had started off well enough with him flying over the city looking down on happy people or busy, preoccupied people. Ordinary people just going about their business. Children playing in parks or in the streets, they all looked like ants from up here (Denny was not very imaginative.)  It was a bright sunny, day, and he was enjoying himself. It all felt strangely real as dreams do, even the weirdest ones, and it never occurred to him to wonder how he had suddenly learned to fly.  He felt godlike looking down on all those ordinary people, so unaware, so safe and secure in their normal lives.  He wondered if this was how Tamar felt all the time.

It started so slowly, he hardly noticed it at first.  The clouds gathered, and below him, the darkness was not falling, but creeping on the city like a thick oil slick, slowly crawling along the streets and over the houses, slow but unstoppable, it turned the city black.  This was utter blackness –  not just the absence of light, but like a living thing.

Denny felt a sick horror as he watched helplessly. The screams of the people, silenced as they were swallowed up by the darkness until there was nothing.

Denny hung in empty space; impenetrable blackness all around him.  Then he heard the voice.  It came from all around him, from everywhere and nowhere at once.

Denny woke up shivering and yet sweating.  The shadowy figure at his bedside melted away without being seen.

Tamar was out; she usually was, night was her time.  He was acutely aware that she needed remarkably little sleep. In fact, he was not sure that she needed any.  She seemed to look upon it as recreation.  As a Djinn she had not been able to dream, and now that she could, she reveled in it.  Denny was wishing that he did not have to dream, not like that anyway.

He wondered if he should call her, but decided against it.  It would be too bad to interrupt her if she was in the middle of kicking some low-life’s πίσω πλευρά.  Not that she would leave in the middle of that anyway, she liked it too much.  Leaving hapless victims in the lurch with a note reading “save you later” was not her style either. She would be back soon.

He got up and went into the kitchen to make some strong black coffee – for some reason, he did not want to go back to sleep.

He drank the coffee in one gulp and then headed for the living room where he began to beat and kick the hell out of the fight training equipment (pads and a dummy) that Tamar had insisted on providing.  And that he trained with for three hours every day. He was getting quite proficient – a surprising development in a man whose most noticeable characteristic had been his laziness. It made him feel better too. And right now he needed the release

‘Want to spar?’ Tamar had appeared behind him and he leaped three feet in the air. He should have been used to this by now, but he was still feeling jumpy.

‘Sorry,’ she said laughing.  She eyed the coffee pot and glanced at the clock – four a.m. ‘Can’t sleep?  Did you have that dream again?’

‘Five, I think it must mean something.’

‘It means you’re going round the twist – sorry but,
premonitions
? There’s no such thing.’

‘How would you know? You don’t know everything you know.  You were wrong about the …’

‘Okay, okay, you’re right, so what
does
it mean?
Who’s
coming, Father Christmas, The Antichrist?’

‘I’m going to go with the second one.’

‘You don’t know – you can’t imagine the feeling, the evil, it feels so
real
.  I’m experienced at nightmares; this is nothing like I’ve ever felt before.  Anyway, how can you say there’s no such thing? What about that dream you had last year?’

‘Still, it doesn’t help; I still don’t know what it
means
.’

‘We’ll figure it out. Why don’t you leave that?’ she gestured to the coffee, ‘and go back to bed.’

‘You can’t go without sleep, and it won’t come back tonight, it never does.’

‘That’s what my father used say. I haven’t had bad dreams like this since he died actually.  Well, they weren’t as bad as
these
dreams I suppose. No, the real nightmares happened when I was awake.’

Tamar looked at him curiously.

‘You know, you’re always saying stuff like that,’ she said.  ‘What was so bad about your father anyway?’

Denny cleared his throat. ‘Micks,’ he said obscurely, as far as Tamar was concerned, and in a voice that was not quite his own. ‘Don’t talk to me about the bleedin’ Micks,’ he continued.’

‘I mean, you’ve got your loyalists and separatists and the fundamentalists.  Bleedin’ ‘ell – they’re all Micks when you come right down to it, aren’t they? They should drop a bloody great bomb on Ireland; that’s what they should do, that’d sort out all the troubles wouldn’t it?’

Denny ignored her. ‘The only thing worse than the bloody Micks are the bleedin’ poofs.  Now that lot ought to be put up against a wall and shot – the whole bloody lot of them.  Don’t you agree boy?  Ha, course you don’t, you great wet liberalist pansy.  I’m not so sure you’re not a bloody poof yourself.  Why don’t you get a haircut, you long haired pretty boy?  I despair of you, I really do. Prancing around like a tit. Why can’t you be more like your brother?’

‘That’s nothing,’ said Denny, relapsing into his usual manner. ‘You should have heard my mother.’

Vaccinated by Paul A. Offit
The Skeleton Man by Jim Kelly
The Drowning Game by LS Hawker
Mystery of the Secret Message by Charles Tang
Musclebound by Liza Cody
The Sheikh’s Reluctant Bride by Teresa Southwick
Finding Valor by Charlotte Abel
Rivers: A Novel by Michael Farris Smith
Middle Passage by Charles Johnson
Explosive (The Black Opals) by St. Claire, Tori
Our partner