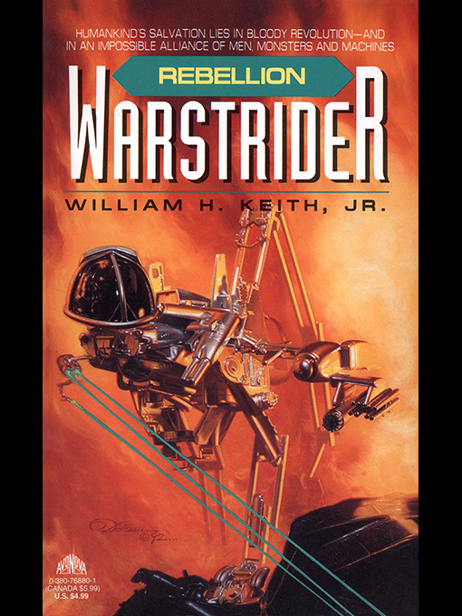 WARSTRIDER: REBELLION is an original publication of Avon Books. This work has never before appeared in book form. This work is a novel. Any similarity to actual persons or events is purely coincidental.

All rights reserved, which includes the right to reproduce this book or portions thereof in any form whatsoever except as provided by the U.S. Copyright Law. For information address The Ethan Ellenberg Literary Agency. 548 Broadway. #5-E, New York. New York 10012.

There was Rock…and there was »self«, the former parting for the latter in the flux of powerful magnetic fields. A universe of rock subtly textured and diverse surrounded »self« in a warm and comforting embrace that flowed around »self’s« shell with semimolten plasticity as it burrowed upward through the yielding strata. Behind lay the depths of Mother Rock; ahead, closer now, was the goal, a concentration of riches undreamed of, a magnetic anomaly tasting of deliciously, dizzyingly pure metals, ceramics, and hydrocarbon compounds.

»Self« could sense its universe in myriad ways: through density and water content and something that might be called the taste of silica, quartz, limestone, metal-sharp ores, and hydrocarbons; through the tug of gravity; through magnetic fields and the far weaker trickle of electrons within the Rock; through the life-giving heat of encompassing Rock and the dimly sensed “flavor” of remarkably concentrated metals now so close ahead.

Though »self’s« concept of time was not, strictly speaking, linear, it knew that it wouldn’t be much longer now.

Dimly, »self« remembered Self, a far vaster progenitor of »self« now far below and behind the upward threading fragment. It shared Self’s perception of the universe, of course, though it remembered only dream-vague slivers of its past life. Self’s view of the universe was shaped by its evolutionary genesis eons past in the bowels of another world light-millennia distant, and by a harshly Boolean logic that perceived its surroundings in terms of yes and no, of Self and not-Self of Rock and not-Rock. It did not,
could
not, recognize the concept of other worlds. In Self’s curiously inverted reality, Universe was an infinite sea of Rock, growing ever denser and ever hotter in all directions out from the Center, while at the Center itself lay a vast emptiness, the Chasm at the Heart of Creation. Self’s former Selves, its predecessors that had vaulted the gulf from another world to this, had passed down memories of the crossing as frozen lattices of magnetic bonds between Self’s subcellular, nanotechnic components, but those memories held images only of black emptiness and slow-dragging eons of time, and not of separate worlds or stars or the basis of astronomical theory.

Tunneling through rock turned plastic, »self« was suddenly aware of near-vacuum, of a flood of radiation, of alien sensations that recalled the memories of the central Chasm. Breakthrough! Self had emerged in the emptiness at the universe’s heart!

Disorientation swirled within the several parts of »self«, dizzying, mind-wrenching. This particular local expression of Self had never pierced the walls of the Great Cavern, and inherited memories were weak and fragile things compared to this new perspective on the world.

The vacuum was not absolute. There was matter beyond the cavern wall, a thin gas of recognizable elements combined in unfamiliar molecules. Oxygen was present, for instance, but as free 0
2
instead of the Usual SiO
2
or Fe
2
O
3
of Rock. Self’s knowledge of astronomy was nonexistent, but its understanding of physical chemistry was superb, its analysis of its surroundings flawlessly precise. »Self« was bathed in electromagnetic radiation as well, energy in two separate frequency bands, one between 10
7
and 10
10
hertz, and another between 10
14
and 10
15
hertz. It suspected that the gap between the two sets of frequencies was the result of absorption by the tenuous gas that blanketed this place.

Self/»self« lived by absorbing energy directly through shifting, nanotechnic surfaces, but the high-energy end of the spectrum was more than it was used to, or needed. Adjusting its surface to a dazzling, reflective silver, »self«began to morph from the slender, streamlined shape used in through-rock travel to the more utilitarian, globular shape of an explorer. Tentacles flicked out, questing. Weapons formed, a precaution in case of attack.

But »self’s« movements were painfully sluggish, slowed by the bombardment of raw data from eighteen separate senses. Reality was far stranger than second- and third-linked images of transmitted memory, imperfectly perceived, imperfectly understood. Emptiness clawed at »self«, the raw wonder and terror of the not-Rock Void at the Heart of Creation. And… and there were
things
here, things at once not-Self, yet, impossibly, they moved, reacted, acted in all ways
alive…
like Self, yet not.…

And they were attacking.

Through fragmentary recollections of past encounters, transmitted to its progeny by Self, »self« knew of the not-Self
things
that could not be alive because they were not-Self, yet nevertheless seemed to have some alien, unreachable life of their own. Something perhaps twice »self’s« mass, something of intricate and literally incomprehensible form, was already probing the outer shell that protected »self« with a barrage of various radiations. Something like a smooth-shaped rock penetrated »self’s« shell, then detonated.

Hurt! Dysfunction! Appendages lay on the ground, uselessly writhing, now little »selves« of their own and independent of »self’s« control. Pivoting, »self« brought weapons of its own to bear.…

Too late! »Self« could feel its consciousness dwindling, lessening with each new, explosive impact. »Self« was, in fact, a cascade of separate consciousness, of many »selves« nested within one another. Dominant was »self«, but »self« was the sum total of hundreds of separate Nodes, and each Node was composed of trillions of cells, some biological, some technological, and each capable of an independent, if limited, existence. Many Nodes working together made »self«, just as many trillions of »selves« together composed the far vaster Unity of Self.

Flame, a white-hot plasma, scorched the writhing tendrils and seared away »self’s« outer layers. Worse, the Adversary’s own nanotech weapons had been loosed and were disassembling »self’s« molecular structure almost atom by atom.

Then »self« was gone, replaced by the random gropings of the Nodes, those that had survived the explosion, at least. And under the deadly assault by radiation and flame and nanotechnic disassemblers, even the Nodes were beginning to dissolve. The memories of other places were gone now, as was any memory of »self’s« personal past or of the glory of lost Self.

And then, even awareness itself was gone.

The LaG-42 Ghostrider stood at the crater’s edge. Within the Ghostrider’s protective armor, Lieutenant Vincent Creighton, 3rd New American Mechanized Cavalry, surveyed the scene through the warstrider’s senses, probing the milk-white haze above the disintegrating Xeno.

The Xeno was dead… and it was damned lucky Creighton had seen the thing when it first nosed clear of the ground. Xeno snakes were always a bit slow shapeshifting to combat mode, and that was definitely the best time to hit them. This one had been a Mamba, a big son of a bitch, and more than a match for a LaG-42 when it was fully morphed and ready for a fight.

Grimly, Creighton turned his attention from the crater to his surroundings, a densely forested hillside beneath an azure-green sky. The domes of Winchester, the planet’s capital, glittered in the distance. Closer at hand, scattered pastiches of red and gold forest reminded him of New America… though the gauzy, mushroom-shaped trees of the Wilderland only remotely resembled the arboreal forms of either 26 Draconis IV or Earth itself. Eridu was a lovely world, one of the Hegemony’s richest and most promising extrasolar colonies.

Or it had been.

Now that the Xenos were here, Creighton knew better than most that the world’s eerie loveliness was doomed. More of the subterranean monsters would appear… then more. Nuclear weapons would be used. Eridu would become a wasteland, her native ecology ravaged, her population herded into camps. The terraformers would have their way at last.

The thought filled Vince Creighton with a bitterness that left him, momentarily at least, unable to link fully with his warstrider. For several seconds, he stood motionless on the crater rim, concentrating on the largely automatic process of safing his weapons and reporting the Xeno kill over his tactical net. Then, finally, he was able to swing the big machine about and start it stalking back toward his base.

A gentle rain began falling an hour later, washing the milk-thick mist back into the ground, until little remained of the Xenophobe machine save blackened lumps of twisted metal.

Nippon’s ascendance to world domination during the twenty-first century was scarcely surprising. By stepping into the high-tech void left by the former superpowers when they abandoned space research in the late 1900s and early 2000s, Japan assured its preeminence in space manufacturing and materials sciences. These advances led directly to even greater revolutions: nanotechnic engineering, biocomputer implants, and ultimately, of course, to the K-T drive that gave Man the stars.

—
Man and His Works