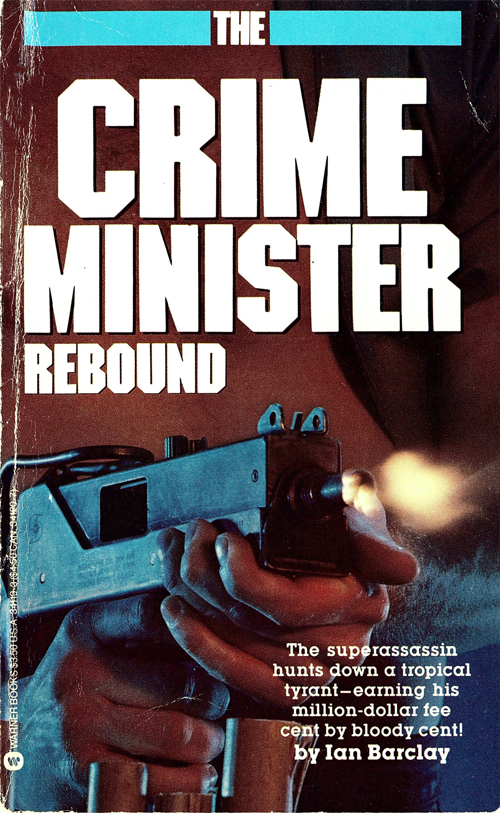 DARTLEY MADE IT AS FAR AS the cover of the bushes before the woman came out of the house again. Well, at least he had reached
his target. Dartley stopped to watch
—
not out of morbid interest but in the hope the woman might change her mind and let the seemingly sleeping man be. But that
was not about to happen.

She shook him by the shoulder again. This time he did not smile or say anything to her. Instead, his head lolled sideways
at an unnatural angle and a spout of bright red blood splashed over the dirty dishes and the white tablecloth.

Dartley heard the woman screaming as he ran through the undergrowth toward the lake.
…

A Bullet For The Butcher!

The night was hot and humid, the air heavy and lifeless. They could feel sweat trickling down their chests, even though their
shirts hung open and they were walking slowly.

“Fucking tropics, man,” one said to the other.

“I thought they were sending me to Greenland until two days before I came out here.”

“They do that to mess up your mind.”

“I still think they sent me here by mistake.”

The two men were mechanics with the 3rd Tactical Fighter Wing of the 13th Air Force, and they worked on F-4s and F-5s at Clark
Air Base. This was their first assignment overseas. Neither of them even knew where the Philippines were until they came here
a month before; in fact, they were still not exactly sure. The town of Angeles was next to the base. Apart from a few old
houses in its center and an old Spanish
church, Angeles was a modern boomtown. The rest of the Philippines was going under in economic depression and corruption,
but not Angeles, where jobs depended on the base and how much the Pentagon was spending.

The two twenty-year-old servicemen were nearly broke. They had enough money for a few beers and figured they would pass the
time walking around Balibago, the entertainment section at the edge of town. They eased their way slowly through the crowds,
beneath the ceaseless frenzy of neons, pestered by men and boys who wanted to buy their U.S. dollars for pesos or sell them
drugs or their virgin sisters. They pushed their way past, moving in the throngs, looking into the Pussy Galore, the Asian
Body Shop, and other discos, bars, and massage parlors.

That was what was driving them crazy. All the little brown-skinned girls with blue-black hair, big brown eyes, red lips, twitching
their shapely asses in come-on walks, lots of flesh left uncovered by miniskirts and see-through blouses. The heat made it
worse.

They went in a bar that was nearly empty except for a few Filipino girls sitting at tables and four Americans standing at
the bar. The girls all smiled hopefully at the two men as they entered, then dropped the smiles instantly as
the two servicemen turned to the bar and ordered bottles of beer from the scantily clad barmaid.

“He’s at the Whiteman Base, in Missouri,” one of the four Americans at the bar was saying to the others in a loud voice. “I
say to him, ‘You’re telling me they made you the trigger-man for a Minuteman missile?’ ‘Damn right,’ he says to me…”

The two mechanics immediately sized up the four men as pilots. They were definitely officers—and no other officers had that
swagger or way of throwing back drinks that pilots had. When they weren’t boozing, they were drinking black coffee. This was
just what pilots did all the time, whether the Air Force liked it or not. When a man had his wings, he perched where he liked.

The one with the loud voice was saying, “He sits in this underground launch-control center with one other officer. This two-man
team controls ten missiles in their silos, some nearby, others miles away. They’re connected to the underground capsule by
hardened underground cable. The missile silos themselves are unmanned. These two guys control all ten of them. Five of these
launch-control centers form a squadron, commanding fifty Minuteman missiles in all.”

The two mechanics could not help noticing how closely the Filipino barmaid was listening to the pilot’s talk. All four of
the fly-boys were half wrecked.

“So what’s to stop your friend from loosing off one or two of these birds if he’s in a bad mood?” one of the pilots asked.

“First of all, the Strategic Air Command has a two-officer policy, meaning it takes two to fire a missile. Second, every man
assigned to this duty had to be reviewed by the Air Force Personnel Reliability Program, and they go all the way back to ask
you how you behaved on your first day in kindergarten. You gotta be squeaky clean. With these missiles, if you drink you don’t
drive.”

“What if you go crazy and hit the other guy over the head?”

“I asked him that. He said that you actually launch the missile by turning two keys simultaneously and that the two keyholes
are too far apart for one man to do it himself.”

One of the two mechanics said in an equally loud voice, “Maybe you shouldn’t be talking in public about these things.”

This caused a sudden silence, and the four pilots turned to look at him. The pilot doing all the talking looked for a moment
as if he wanted a fight, then quickly changed his mind. “I’ve seen the two of you, haven’t I, working on an F-4 in a hangar?
We’re with the 347th.”

The 347th Tactical Airlift Wing consisted of five squadrons based at Clark. He didn’t have to say that he was a pilot, and
the man who had crossed him was a mechanic. Yet both of them knew that if the mechanic lodged a complaint about a pilot talking
about sensitive material off base, even if the pilot was found not to have broken any rules, the accusation would linger as
a black mark against him. He bought a shot of Wild Turkey and a beer chaser for everyone, including the two mechanics.

“This is all stuff,” the pilot explained, “that the Air Force wants everyone to know about so they won’t go thinking that
some guy whose wife won’t lay him can get back at the world by putting his finger on the red button. There is no red button.
When they get an order to launch—they call it an emergency-action message—it comes in code, and the two launch-control officers
have to decode it separately and validate it. The documents for doing this are kept in a double-locked safe, for which each
officer knows only one of the two combinations. This emergency-action message contains a six-digit number which they punch
into a positive enable switch. When they do this, it automatically alerts the four other launch-control centers in the squadron,
each with a two-man crew, and any one of these can use an inhibit switch to stop the other capsule’s unauthorized launching.

“And that isn’t all. Even if both the officers in one capsule were nuts and managed to get hold of the correct six-digit positive
enable switch number out of sixteen million possible combinations, and supposing they managed to persuade all eight men in
the four of the other capsules not to use the inhibit switch—it takes only one man to work that switch—and turned their two
keys simultaneously, still nothing would happen. Because a two-man crew in one of the four other capsules must also turn their
keys. So, at an absolute minimum, so long as no capsules are destroyed in an attack, it takes four individuals to launch a
single Minuteman.”

They celebrated this with another round of Wild Turkey and bottled beer. The pilots bought
a third round before they left. Unused to whiskey, the two mechanics were feeling no pain when they finished their drinks
and wandered out beneath the neon signs, looking hungrily at the girls but knowing that moneyless men got no credit here.

“Hey, quit bumping into me. Can’t you walk straight?”

They brushed aside a man who tried to talk with them. He persisted.

“We got no bread. Leave us alone.”

“I want to buy you a drink,” the Filipino said.

The two American servicemen stopped and stared at him. They had only been in the Philippines a month, but that was long enough
for them to learn that, to the inhabitants, Americans were here to be plucked, not pampered. Yet they had just been bought
drinks by officers—and that was strange enough! Why not a Filipino now? He was a little guy, twice as old as them. Whatever
he tried, they could handle him and a few others like him. They went into the nearest bar. The Filipino wasn’t trying to lure
them down a dark alley or anything. He ordered and paid for three bottles of beer.

“You say you have no money?” the Filipino inquired politely.

Cold Fear by Rick Mofina
Born in a Burial Gown by Mike Craven
Agatha Raisin and the Vicious Vet by Beaton, M.C.
French kiss by Aimee Friedman
04. The Return of Nathan Brazil by Jack L. Chalker
Wedding Day Murder by Leslie Meier
No Rescue by Jenny Schwartz
Wild Flame by Donna Grant
Only the Animals by Ceridwen Dovey
Lightpaths by Howard V. Hendrix
Our partner