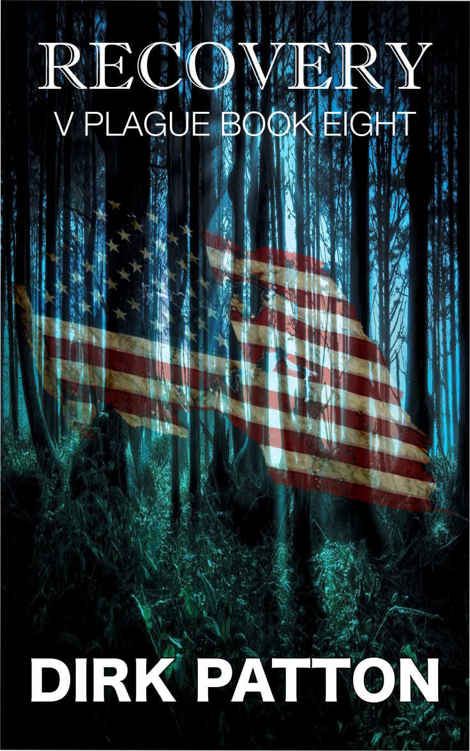 This
book, or any portion thereof, may not be reproduced or used in any manner
whatsoever without the express written permission of the copyright holder or
publisher, except for the use of brief quotations in a critical book review.

Printed in
the United States of America

This
is a work of fiction. Names, characters, businesses, brands, places, events and
incidents are either the products of the author’s imagination or used in a
fictitious manner. Any resemblance to actual persons, living or dead, or actual
events is purely coincidental.

Thank you
for purchasing Recovery, Book 8 in the V Plague series.  If you haven’t read
the first seven books you need to stop reading now and pick them up, otherwise
you will be lost as this book is intended to continue the story in a serialized
format.  I intentionally did nothing to explain comments and events that
reference book 1 through 7.  Regardless, you have my heartfelt thanks for
reading my work and I hope you’re enjoying the adventure as much as I am.  As
always, a good review on Amazon is greatly appreciated.

Trapped in the cold outside

There ain't no shelter

And they want to force my hand

Until I take what I want

And break all the lies

And defeat the fucking liars

Smash all the temples

And crawl through the rubble

And cry to the fallen

I'm the last of my kind still standing

Alice In Chains –
Last Of My Kind

“Why
there?”  Martinez asked over the intercom when I told her where we were going.

Colonel
Crawford and I had climbed aboard the Huey five minutes ago, just moments ahead
of a charging phalanx of infected females.  Once on board he had introduced
himself to Katie before I had a chance, or frankly even thought about it.  She
told him she’d heard a lot about him from Rachel, making him smile when she
thanked him for helping me.  She has a way of making men smile when she wants
to.  And grimace and groan.  When she wants to.

The Colonel
and I were the last boots to leave the ground when Tinker Air Force Base fell.
Spooky, an AC-130U gunship, had kept the infected beaten back while the last of
the defenders boarded a waiting C-130 and escaped.  Our ride couldn’t swoop in
and pluck us out of reach of the infected until the two large planes cleared
the area.

The C-130 was
carrying the Marines and Rangers that had volunteered to stay behind and face
certain death so that all of the civilians could be evacuated, but the Navy had
showed up at the last minute to help and everyone that was still alive made it
out.  They were winging their way to the southeast, heading for the Bahamas,
but we weren’t going with them.  Not yet, at least.

When the
evacuation order had been issued, Air Force Tech Sergeant Scott, Irina and Igor
had set out in a Bradley Fighting Vehicle to find me.  It turned out that I
hadn’t needed finding, but now they did.  And we weren’t going to go lounge in
a tropical paradise and leave them behind on the Oklahoma plains.

“Because
we’re out of everything,” I said.  “There’s food, water, shelter, weapons and
ammunition there.  And fuel too, if we can find a way to transfer it from the
Pave Hawk into this.”

I had told
Martinez to head for the casino where we’d rescued Katie.  We were dangerously
low on supplies and had been running and fighting for days.  We needed food,
rest, and more bullets.  Not necessarily in that order, but I was ready to take
anything I could get.

A few
moments later the Huey banked as she put us on our new course and I leaned
against the rear bulkhead.  Katie was still strapped in to the door gunner’s
position, catching my eye and giving me a bright smile.  I winked at her and
leaned my head against the vibrating, steel wall.  Dog, at the end of his
safety tether, lay down next to me and put his head in my lap, big golden eyes
staring up at me.  I placed my hand on the back of his neck and closed my eyes.

“Holy shit.”
Colonel Crawford’s voice roused me and I realized I had drifted off.

He was next
to Katie, looking through the open side door at the ground below.  Moving Dog’s
head out of the way I scooted over next to them and looked down at the wreckage
of the Osprey I’d been in when it went down.

I had seen
the results of the crash from ground level.  But as with many things, the
perspective from the air is dramatically different.  The gouge in the field
looked like something dug with heavy equipment and the scattered debris and
bodies really drove home just how violent the impact with the earth had been.

“Martinez,
make a couple of orbits to see if it’s clear, then set down for a few
minutes.”  I said.  “Katie, you see anything moving, light it up.”

“What are we
doing?”  Crawford asked as Martinez cut our speed and began a slow, wide circle
of the area.

“Weapons,” I
said.  “I can’t tell you what the civilians at the casino had, but I suspect it
was a little of this and a little of that.  Probably a bunch of different
calibers and doubtful they had anything other than semi-auto only.  There were
several Soldiers and Marines that were killed in the crash.  There will be M4s
and probably some ammo we can grab down there.”

Crawford
nodded and I turned my head when Katie called over the intercom.

“There are
half a dozen males bumbling around, but no females.  Want me to take them out,
or save the ammo?”  She asked.

The M60
began hammering out short bursts a moment later.  Katie used the tracer rounds
to adjust her aim and quickly chewed up the handful of infected.

“Clear,” she
called to Martinez who spun us around and dropped to a hover a couple of feet
above the dirt.

I led the
way out, jumping to the ground, Colonel Crawford right behind me, Dog voicing
his complaint that he was still tied up and couldn’t come with us.  We ran,
clearing the area as Martinez gained altitude.  She would stay in a low orbit,
keeping an eye out for any danger while we scavenged.

There were a
lot of dead bodies in and around the wreck, and they’d been baking in the sun
for a couple of days.  They were ripe.  Eye watering, stomach turning ripe.  I
didn’t even have a shirt I could pull up over my nose and mouth to try and
filter the stench.  Katie was wearing it and all I had on my upper body was a
blood and mud stained tactical vest.

Ignoring the
odor that is all too common in my vocation, I headed for the remains of the
Osprey’s fuselage.  I clicked on a weak flashlight I’d taken from a liquor
store in Tulsa, but it didn’t do much of anything.

“Here,”
Crawford pulled the high intensity light off his rifle and handed it to me
without taking his attention off our rear.  I was pleased to see he hadn’t
forgotten what to do in the field.

Clicking the
light on I shined it around the interior, glad when I didn’t see anything other
than wreckage and bodies.  Well, happy I didn’t see any infected waiting to
attack, not that there were dead Soldiers and Marines inside.

“Going in,”
I said in a quiet voice to let Crawford know what I was doing.

“Go,” he
replied, letting me know he was watching my ass for me, and I climbed over the
first large piece of debris.

The odor of
decaying bodies was worse inside the partially enclosed space.  Way worse.  I
held my breath as much as I could, moving carefully.  There was wreckage
everywhere, and much of it had sharp points or edges.  I remembered how it kept
shifting when the female had been looking for me, and I was concerned about
something moving and causing me to fall and seriously injure myself.

It took
longer than I liked, but I wound up scrounging four pistols, five M4 rifles and
an armload of full magazines.  I’d taken several mags off the bodies previously,
before setting off across the plains to follow Katie’s captors, but there had
been a lot I hadn’t been able to carry.  Opening one of the dead Marine’s
packs, I hit the jackpot.  Four unopened battle packs of ammo and another ten
fully loaded magazines.

Humping all
of this out into the fresher air, I piled it up and was turning to go back and search
for more when the M60 began firing.  Spinning, I looked up to see what
direction it was firing, following the path of the tracers to a point on the
ground a hundred yards to our south.  There were a lot of figures sprinting
towards us.  Infected females.

Martinez
slipped the Huey sideways as Katie kept firing nice, controlled bursts into the
group.  I dropped the AK47 I’d taken from the terrorist I’d killed in Tulsa,
snatching up one of the M4s.  I checked it over, happy it had a sound
suppressor screwed on the end of the muzzle.  Loading my vest with full
magazines, I raised the rifle and fired a few rounds at the females that were
still alive.

Everything
worked exactly as expected and I let the rifle drop to the end of its sling as
I gathered up supplies in my arms.  A few moments later the door gun fell
silent and the Huey touched down between the point where the females had been
and us.  I could see Katie through the open side door, facing the direction the
threat had come from, constantly scanning back and forth for any additional
infected.  Damn, but I had married well!  Shame she couldn’t cook.