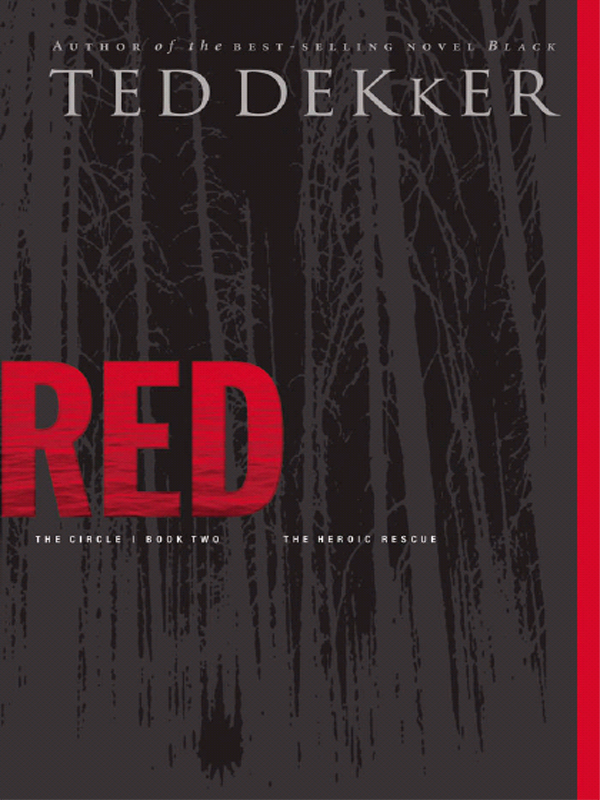 Praise for
RED
and
Ted Dekker's other novels

“Full of heroic action, deep meaning, and suspense so palpable your fingers will dig grooves into the book's outer cover,
Red
magnifies the story of
Black
times ten, raising the stakes to epic proportions. But Ted Dekker's biggest ace in the hole is that he understands what so many others never realize: substance and meaning
can
go hand-in-hand with exciting, cinematic storytelling.
Red
is a thrilling, daring work of fiction that not only entertainsâit inspires. Why aren't there more stories like this?”

“As a producer of movies filled with incredible worlds and heroic characters, I have high standards for the fiction I read. Ted Dekker's novels deliver big with mind-blowing, plot-twisting page-turners. Fair warningâthis trilogy will draw you in at a breakneck pace and never let up. Cancel all plans before you start because you won't be able to stop once you enter
Black
.”

“Put simply: it's a brilliant, dangerous idea. And we need more dangerous ideas . . . Dekker's trilogy is a mythical epic, with a vast, predetermined plot and a scope of staggering proportions . . .
Black
is one of those books that will make you thankful that you know how to read. If you love a good story, and don't mind suspending a little healthy disbelief,
Black
will keep you utterly enthralled from beginning to . . . well, cliffhanger.
Red
can't get here fast enough.”

“Just when I think I have Ted Dekker figured out, he hits me with the unexpected. With teasing wit, ever-lurking surprises, and adventurous new concepts, this guy could become a read vanguard in fiction.”

“The action [in THR3E] builds with clever twists along the way, delivering plenty of suspense . . . Dekker's latest tale of intrigue will have crossover appeal to fans of Dean R. Koontz or Frank Peretti.”

“
Black
has to be the read of the year! A powerful, thought-provoking, edge-of-your-seat thriller of epic proportions that offers great depth and insight into the forces around us.”

“Ted Dekker is clearly one of the most gripping storytellers alive today. He creates plots that keep your heart pounding and palms sweating even after you've finished his books.”

“[With THR3E] Dekker delivers another page-turner . . . masterfully takes readers on a ride full of plot twists and turns . . . a compelling tale of cat and mouse . . . an almost perfect blend of suspense, mystery, and horror.”

“Ted Dekker is the most exciting writer I've read in a very long time.
Blink
will expand his fan base tremendously. Wonderful reading . . . powerful insights. Bravo!” 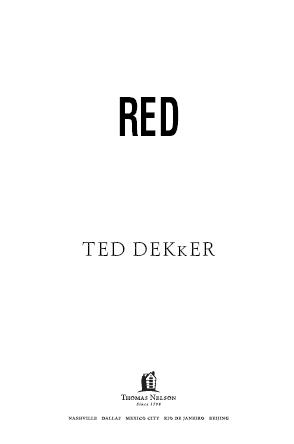 All rights reserved. No portion of this book may be reproduced, stored in a retrieval system, or transmitted in any form or by any meansâelectronic, mechanical, photocopy, recording, or any otherâexcept for brief quotation in printed reviews, without the prior permission of the publisher.

For my children.
May they always remember
what lies behind the veil.

Thomas Hunter's story begins in
Black,
Book One of The Circle Trilogy. If you've yet to read
Black,
I strongly encourage you to start there.
Red
is far richer once you've fully experienced Thomas's initial journey into two realities. There are numerous plot twists that deserve grounding before you plunge into the pages ahead.

Once you've read
Black,
you're ready to step into
Red.
But be forewarned, nothing will prepare youâor Thomasâfor what awaits him in this second book of the epic trilogy.

KARA GOT halfway to her door and stopped. She and Thomas were in a large hotel suite with two bedrooms. Beyond her bedroom door was a short hall that ran to the living room and, in the other direction, to the adjoining suite. Across that hallâher brother's room, where he lay dead to this world, dreaming, oblivious to the news she'd just heard from Deputy Secretary Merton Gains.

The virus had been released exactly as Thomas had predicted just last evening.

Half an hour,
Secretary Gains had said.
Bring him down in half an
hour
. If she woke Thomas now, he'd demand to go down immediately. Every minute of sleepâfor that matter every secondâcould be the equivalent of hours or days or even weeks in his dream world. A lot could happen. Answers could come. She should let him sleep.

Then again, Svensson had released the virus. She should wake her brother now.

Right after she used the bathroom.

Kara hurried to the side room, flipped the light switch, turned on the water. Closed the door.

“We've stepped off the cliff and are falling into madness,” she said. Then again, perhaps the fall to madness had started when Thomas had tried to jump off the balcony in Denver. He'd dragged her to Bangkok, kidnapped Monique de Raison, and survived two separate encounters with a killer named Carlos, who was undoubtedly still after them. All this because of his dreams of another reality.

Would Thomas wake with any new information?
The power was gone
from the colored forest,
he'd said. The colored forest itself was gone, which meant that his power might be gone as well. If that was the case, Tom's dreams might be useless except as fantasies in which he was falling in love and learning to do backflips off a pinhead.

The water felt cool and refreshing on her face.

She flung the water from her hands and stepped to the toilet.

THOMAS URGED the sweating black steed into a full gallop through the sandy valley and up the gentle slope. He shoved his bloody sword into his scabbard, gripped the reins with both hands, and leaned over the horse's neck. Twenty fighters rode in a long line to his right and left, slightly behind. They were unquestionably the greatest warriors in all the earth, and they pounded for the crest directly ahead, one question drumming through each one's mind.

The Horde's attack had come from the canyon lands, through the Natalga Gap. This was not so unusual. The Desert Dwellers' armies had attacked from the east a dozen times over the last fifteen years. What was unusual, however, was the size of the party his men had just cut to ribbons less than a mile to the south. No more than a hundred.

Too few. Far too few.

The Horde never attacked in small numbers. Where Thomas and his army depended on superior speed and skill, the Horde had always depended on sheer numbers. They'd developed a kind of natural balance. One of his men could take out five of the Horde on any bad day, an advantage mitigated only by the fact that the Horde's army approached five hundred thousand strong. His own army numbered fewer than thirty thousand including the apprentices. None of this was lost on the enemy. And yet they'd sent only this small band of hooded warriors up the Gap to their deaths.

They rode without a word. Hoofs thundered like war drums, an oddly comforting sound. Their horses were all stallions. Each fighter was dressed in the same hardened-leather breastplate with forearm and thigh guards. These left their joints free for the movement required in hand-to-hand combat. They strapped their knives to calves and whips to hips, and carried their swords on their horses. These three weapons, a good horse, and a leather bottle full of water were all any of the Forest Guard required to survive a week and to kill a hundred. And the regular fighting force wasn't far behind.

Thomas flew over the hill's crest, leaned back, and pulled the stallion to a stamping halt. The others fell in along the ridge. Still not a word.

What they saw could not easily be put into words.

The sky was turning red, blood red, as it always did over the desert in the afternoons. To their right stretched the canyon lands, ten square miles of cliffs and boulders that acted as a natural barrier between the red deserts and the first of seven forests. Thomas's forest. Beyond the canyon's cliffs, red-tinged sand flowed into an endless sea of desert. This landscape was as familiar to Thomas as his own forest.

What he saw now was not.

At first glance, even to a trained eye, the subtle movement on the desert floor might have been mistaken for shimmering heat waves. It was hardly more than a beige discoloration rippling across the vast section of flat sand that fed into the canyons. But this was nothing so innocuous as desert heat.

This was the Horde army.

They wore beige hooded tunics to cover their gray scabbed flesh and rode light tan horses bred to disappear against the sand. Thomas had once ridden past fifty without distinguishing them from the sandstone.

His second in command searched the horizon to the south. He followed her eyes. A dozen smaller contingents were heading up the Gap, armies of a few hundred each, not so much larger than the one they'd torn apart thirty minutes ago.

“Hundred thousand,” she said. A strip of leather held her dark hair back from a tanned forehead. A small white scar on her right cheek marred an otherwise smooth, milky complexion. The cut had been inflicted not by the Horde, but by her own brother, who'd fought her to assert his strength just a year ago. She'd left him unscathed, underfoot, soundly defeated.

He'd died in a skirmish six months after.

Mikil's green eyes skirted the desert. “This will be a challenge.”

Thomas grunted at the understatement. They'd all been hardened by dozens of battles, but never had they faced an army so large.

“The main body is moving south, along the southern cliffs.”

The Reinvented Miss Bluebeard (London Paranormal 03) by Minda Webber
The Savage City by T. J. English
Fedora by John Harvey
Extinction by Sean Platt & Johnny B. Truant
Forget Me Not 1: DECEIVED by Bennett, Liv
The Sin Eater by Sarah Rayne
The ALL NEW Don't Think of an Elephant!: Know Your Values and Frame the Debate by George Lakoff
A Wild Ride (Thompson & Sons Book 4) by Vivian Arend
God Speed the Night by Dorothy Salisbury Davis, Jerome Ross
The Borrowed Bride by Susan Wiggs
Our partner