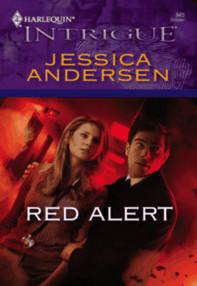 They were completely and utterly alone.

Meg was conscious of the quick rise and fall of Erik’s broad chest as their spat of moments ago morphed into something hotter and more dangerous.

“This is stupid,” she said, as much to herself as to him. “I don’t like you. I don’t trust you. I shouldn’t be attracted to you.”

“Same goes,” he said, a flash of desire crossing his face. “Then again, that seems to be my usual M.O. What’s your excuse?”

But even though his words came out fairly mocking, he closed the distance between them until she could feel the warmth of him against the suddenly sensitized skin of her cheeks and lips. “Stupidity, maybe. The circumstances. Hell, even the danger. I don’t know.”

But she did. That last choice resonated a little too well, but the moment was lost when he closed the gap between them. Their lips touched. Their breaths mingled.

And their last shreds of rationality were lost.

Though she’s tried out professions ranging from cleaning sea lion cages to cloning glaucoma genes, from patent law to training horses, Jessica is happiest when she’s combining all these interests with her first love: writing romances. These days she’s delighted to be writing full-time on a farm in rural Connecticut that she shares with a small menagerie and a hero named Brian. She hopes you’ll visit her at www.JessicaAndersen.com for info on upcoming books, contests and to say hi!

Megan Corning
—Her medical research is poised to revolutionize prenatal genetic testing, but the technique has a darker side. When a series of “accidents” threaten Meg’s life, a handsome stranger protects her—but his motives are far from pure.

Erik Falco
—Once a cop, now a hugely successful businessman, Erik has vowed to acquire the rights to the cutting-edge research. But how far will he go once he meets the lovely Dr. Corning?

Zachary Cage
—The head administrator of Boston General Hospital must weigh the value of the new technology against the needs of the hospital and the safety of his employees.

Raine Montgomery
—Erik’s second-in-command has something to hide.

Annette Foulke
—She wants the tenured university position that Megan seems sure to win.

Luke Cannon
—Is it a coincidence that the head of acquisitions at Pentium Pharmaceuticals is a member of Meg’s climbing gym?

Edward
—The youth hides beneath the hood of a dark sweatshirt and listens to the voices that tell him he has only one chance to make things right.

Edward slipped through the front door of the hospital unnoticed. Bodies thronged the main atrium, a lunchtime press of patients and personnel that made it easy for him to cross the lobby unnoticed in his jeans and dark hooded sweatshirt. From there, he walked to the brushed-steel elevators that led to the Reproductive Technology offices. Then he waited.

He sneered at the men and women who passed his vantage point, some alone, some in couples, all united by hope. The desire to create a new life. A new beginning.

Garbage, he thought with a quiet snort. There was no such thing as a new beginning. You only got one life, and if you screwed it up, you were out of luck.

Then again, his mother used to say,
You’ve got to make your own luck. Nobody else is going to make it for you.

That was what he was doing. Making his own luck.

“Are you sure about this?” a female voice asked nearby.

Edward turned to see a dark-haired woman clinging to the free arm of an even darker-haired man. Though the guy looked to be in his late thirties, he used a gray metal cane to hitch along on a leg that didn’t bend quite right.

“It’s just a blood test,” the guy said, voice sharp, as though he’d answered the question before. He glanced down and his expression softened a degree. “I wouldn’t endanger you or the baby.”

“Of course,” the woman murmured as the elevator doors whooshed open, inviting them in. She didn’t sound convinced, nor did she release the gimp’s arm as the two of them stepped into the elevator.

The doors hissed shut, leaving Edward staring after the couple. A faint smile touched his lips as he reached up and pulled his sweatshirt hood forward so he could see out but nobody could see in.

Today was going to be his lucky day.

Exhaustion thrummed through Megan Corning’s body, a combination of too many grant applications and too few days off in the past months.

Knowing she didn’t have time to be tired yet, Meg dug her fingers into her red-gold hair and told herself to focus on something else. Something positive, like the new office the Boston General Hospital administrators had given her just the week before.

She glanced around the room and grimaced.

The walls were painted a classy ice-blue and hung with a handful of diplomas and accolades. The front cover of last March’s
Science
magazine was smack in the center, announcing a “New Noninvasive Method for Prenatal Diagnosis.” If her desk were a bed, it would’ve been a California king, and the rolling chair was real leather.

It all looked very impressive. Hell, what she’d done
was
impressive. But the wall art, added to the stark white padded chairs opposite her black metal desk, gave the decor a chilly feeling.

The room was
so
not her.

At least, it wasn’t how she saw herself. She had a sneaking suspicion the austere furniture and harsh lighting were perfectly aligned with how too many of her co-workers saw her. Functional. Dependable. Lacking warmth.

And why is that?

She closed her eyes and rubbed her temples, knowing she’d created the image herself a decade earlier, on her father’s orders that she tone down her reputation when he got her the job at Boston General.

Well, not orders, precisely. Call it a strong suggestion from Dad. Who also happened to be a Nobel Prize–winning scientist.

Tone down the dangerous stuff, Meg,
Robert Corning had said in his resonant lecturer’s voice.
They already doubt your science, why give them an excuse to criticize your sense?

As much as she’d hated to admit it, he’d had a point. Her insistence on proving that a baby’s cells could be found in the mother’s bloodstream had already raised too many eyebrows. Her grades hadn’t been the best, and her Ph.D. thesis had been long on theory, short on results.

Of necessity, she’d grown out the streaks in her hair, put her skis, parachutes and other toys into storage, and focused on figuring out how to test a baby’s genetic makeup from a sample of the mother’s blood.

They said it couldn’t be done, but she’d managed it. She’d developed a blood test that was poised to
revolutionize prenatal genetic analysis. Boston General Hospital and her cosponsor, Thrace University, would reap the rewards and Meg would be assured tenure. She’d be set for life—she’d have a job, a good salary, a whopping pension and a corner office.

“And it won’t be black and white!” she said out loud.

A head popped around the open office door. “You need me, boss?”

“Um, no. I was talking to myself, actually.” Meg grimaced when Jemma Smoltz, her patient coordinator and sometimes lab assistant, stepped into the room.

Short, dark hair framed Jemma’s pixie-perfect face, and she wore flirty capri pants that showed off her slim ankles, one of which was tattooed with a pink rose.

She was twenty-six, tiny and feminine, and she made thirty-four-year-old, five-foot-ten Meg feel like a human water buffalo in comparison.

Less so these days, though, because Meg had been working out. She’d lost fifteen pounds since winter, and had her sights set on another ten.

Jemma grinned. “Daydreaming about that stud rock climbing instructor at your new gym?”

Meg rolled her eyes. “I never should have told you about Otto.” But there was no harm in it, really. She was just window shopping, admiring the kind of active, muscle-bound hunk she’d always found attractive.

“You should ask him out.”

“Not on your life. He’s too young for me. And besides—” Meg waved at the diplomas, the glossy magazine cover and the cool blue walls “—that’s not my lifestyle anymore. I can’t take off on a moment’s notice to free climb God only knows where.” Though there were sure days she wished she could. “I’ve got a lab. Responsibilities.”

Jemma wrinkled her nose. “That doesn’t mean you have to be boring.”

“I’m not boring, I’m focused. There’s a difference.” Although some days, she worried that there wasn’t any difference at all. That she wasn’t pretending to be boring anymore—she’d actually
become
boring.

Hell, even her recent return to free climbing was on an indoor wall with landing pads on the floor.

Unusually annoyed with her office, with herself, Meg reached across her desk and flipped open the next folder on a stack of twenty, hoping Jemma would get the hint.

“Aw, come on,” the younger woman wheedled. “You owe it to yourself to ask Otto—”

“I owe it to the hospital to collect another fifty beta test subjects before the end of the week,” Meg snapped. “Is the next patient here?”