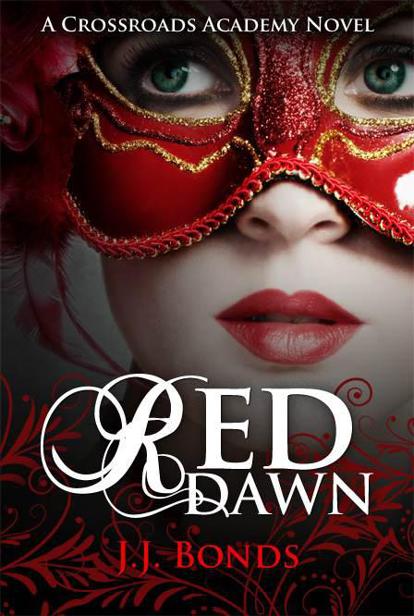 This book is a work of fiction. Any resemblance to actual persons, living or dead, events, or locales is entirely coincidental.

For my husband, whose unwavering support and endless patience has allowed me to make my dreams a reality.

Hell’s bells! There have to be fifty rooms in the manor and I’m about to be caught snooping in the one place that’s off limits: Aldo’s office. So much for having the place to myself. The Elder’s Council must have decided to call it an early night. Why else would Aldo be home so soon? I quickly scan the office for a hiding place and lunge for the closet. I yank the heavy oak door open and survey the room for any sign of my intrusion. Aldo’s office looks just as one might expect. It’s dark, masculine, and intimidating. Not the kind of place you want to be if you’re in trouble or a nosy teenage vamp.

Satisfied everything is in its proper place, I hastily pull the door shut sealing myself inside. It clicks softly into place as the main door to the office slides open. I stand silently in the dark, my heart racing. I don’t dare breathe; not even to curse my stupid curiosity. The last thing I want to do is give Aldo a reason not to trust me. Sneaking a peek at Aldo’s copy of the Vampire Chronicles, the Elder’s complete history of vampirism, is so
not
worth it. What was I thinking?

“That, my friend, would be a gross understatement,” returns Aldo. He sounds tired. And… bitter? Not a good sign. “Rumors of unrest persist among the covens and I grow weary of their incessant squabbling.”

Rumors of unrest
persist
? How long has this been going on? And what does it mean? I can’t believe what I’m hearing. I have a million questions, but apparently Viktor’s a better listener than I am because he remains silent, waiting for Aldo to continue. Unlike me, he’s got that whole ‘patience is a virtue’ thing figured out. I’m still working on it. Sort of.

“I fear we have greater challenges on the horizon than internal power struggles. Dark days are upon us. Of this I am certain.”

“Always,” Aldo sighs. “Her proximity to me will make her a target. That’s why I’ve asked Anya to continue working with Katia when she returns to Crossroads. Now more than ever it is imperative that Katia learn to harness all of her abilities for her own safety.”

“Be that as it may, she isn’t going to like it.” Viktor laughs heartily. I make a mental note of his amusement and tuck it away as motivation for our next sparring session.

“Agreed. And that is why I’m not going to tell her.”

I slide into one of the smooth leather chairs in the middle of the plane and fasten my seatbelt as the captain prepares for takeoff. The seatbelt seems pointless given my sturdy vampire form, but it’s a force of habit that lingers from my human upbringing. The engines roar to life and it’s only a matter of minutes until we’re cleared for takeoff. As the plane taxis down the runway, I stare absently out the window and let my thoughts drift to Crossroads. I’ve spent the summer dodging my personal demons and anything else that might resemble introspective thought. It’s not exactly my strong suit, but with summer drawing to a close, I can’t hide any longer. By this time tomorrow I’ll be at Crossroads. It’s a bittersweet realization.

I’m excited to see Shaye and Anya. I’ve missed them more than I want to admit, but there are other things- other people- to think about as well. Like Blaine. I promise myself that I’m going to stay out of his way and avoid trouble. The last thing I need to do is start the year off with more verbal sparring. I know Aldo had words with him, and that those words were little more than a thinly veiled threat, but as a result Blaine’s agreed to keep the secret of my mixed-blood heritage. Still, that doesn’t exactly make us friends and I don’t want to press my luck where’s he’s concerned.

Who am I kidding? Fear of Blaine, of exposure, isn’t the reason I’ve tried to keep my thoughts preoccupied all summer. No, the real reason I’ve avoided thinking about Crossroads is Nik. “Nikolai Petrov.” His name rolls off my tongue effortlessly and I feel a warm blush flood my cheeks as I think about the last time I saw him. “Stop acting like a lovesick fool,” I mutter. As if self-reproach is going to change anything. Things between Nik and I are complicated at best. And so are my feelings for him.

We haven’t really spoken all summer and I wonder what that means. The mere thought of him has my stomach twisting in anxious knots. Nik knows that Aldo isn’t really my Great Uncle and that I’m not a pureblood vampire. He knows I’m de sange amestecat. I trust him to keep that secret, but I wonder how it affects his view of me. He says it doesn’t change anything, but how can it not? There aren’t a whole lot of pureblood vamps who want to hook up with a mixed-blood. We’re pretty much second class citizens. Is that why I haven’t heard from him all summer? Maybe he’s had a change of heart? I mean, I know the phone works both ways, but how hard is it to send a freaking text message? Not very, judging by the number I got from Shaye.

Hell’s bells! The more I allow myself to think about Nik, the more I fear I’ll be overwhelmed by my own emotions and by questions for which I have no answers. Will Nikolai still feel the same? Will things be normal when I see him or will it be totally awkward? I
really
don’t want to do awkward. We did that dance last year and I’d rather not go back.

I fidget nervously in my seat as my brain shifts into overdrive. Can we really just pick up where we left off? Maybe he’s dating someone else now? A summer fling? Is that why he hasn’t called? It’s not that unlikely. Nik, with all his charm and smoldering intensity, is my polar opposite. One flash of his gorgeous smile is all it would take. He can have any girl he wants. And he knows it. No wonder he’s always brimming with confidence.

He’s the one who pursued me, I remind myself. But even as I clutch at self-reassurance, a nasty little voice in the back of my head counters that Nik’s pursuit began long before he knew the truth. And that I haven’t heard from him all summer. Determined to beat that little voice of self-doubt into submission, I square my shoulders and promise myself that I will not be one of those pathetic girls who needs a guy to define her. I am stronger than that. And definitely more independent. I don’t
need
anyone, especially Nik. Even so, I can’t deny that it would be nice to feel the warmth of his arms wrapped around me again. Too bad wanting Nik might be just as dangerous as needing him.

“What did I get myself into?” I ask, dropping my bags on the floor unceremoniously. I briefly contemplate making a run for it, but I doubt it would do any good. I have to remind myself that I agreed to this as I take in the scene before me. That I
chose
it.

“Hi roomie!” Shaye coos in an unnaturally sweet voice. If I didn’t know better, I’d think she were up to something. But that’s just my suspicious nature. Shaye’s not like me. She’s always upbeat. In fact, she’s kind of like the postal service that way. Rain or shine, Shaye will always be smiling. I’d bet there aren’t many people who’d take us for being friends, but she kind of worked her way into my good graces, and my heart, last year. And that’s what got me into my current predicament, I think, as Shaye rushes over to hug me.

“Looks like you’ve had plenty of time to unpack,” I greet her. I can’t help but cringe as I peer over Shaye’s shoulder and note an ungodly number of stuffed animals. It’s going to be a long year.

“Yeah. Almost done!” she giggles. Shaye releases her grip on me and returns to the bed where a mountain of clothes is obscuring my view of one
fugly
floral bedspread. Ugh! I’d forgotten how girly Shaye’s dorm was last year. Even if I had remembered, I’m not sure I’d have had the strength to withstand her continual pleading to room together this year. I’m not ashamed to admit that she more or less wore me down. Something about how it would be good for me to spend more time with other people and how much fun we’d have together, like an ongoing slumber party. Shaye can be quite persistent when she wants to be. And while I’m not crazy about giving up my privacy or the prospect of a never ending sleepover, I figured that sharing a room would make it easier to keep an eye on Shaye’s health. If she has a relapse of otrava de sange, I’ll be here for her.