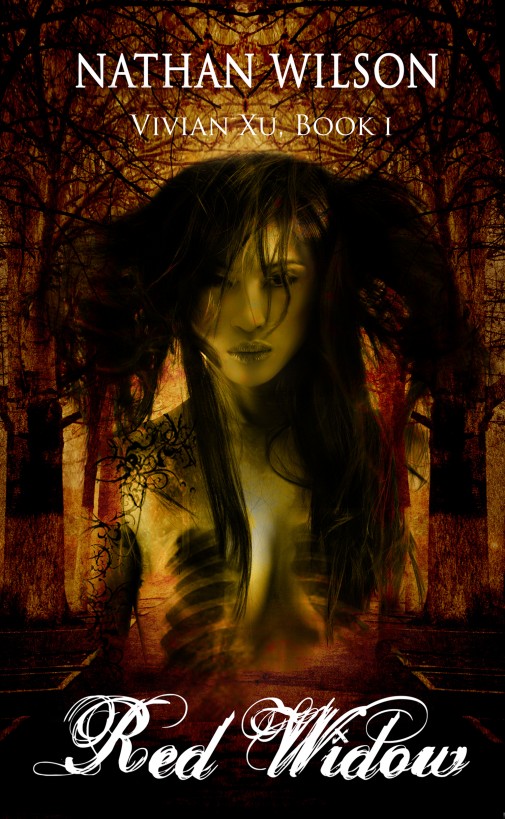 Red Widow
is a work of fiction. Names, characters, places
and incidents are products of the author’s imagination and or are
used fictitiously. Any resemblance to actual events or locales or
persons, living or dead, is entirely coincidental.

Thank you for downloading this free
ebook. Although this is a free book, it remains the copyrighted
property of the author, and may not be reproduced, copied and
distributed for commercial or non-commercial purposes. If you
enjoyed this book, please encourage your friends to download their
own copy at Smashwords.com, where they can also discover other
works by this author. Thank you for your support.

Discover other titles by Nathan Wilson
at Smashwords.com:

Vivian Xu lifted her porcelain face to
the night sky as raindrops fell. Neon lights wavered in the puddles
splashed on the streets, casting a fiery glow on the city of
Prague. Her hourglass silhouette sped through the rain, past cafes
and night clubs pulsing to the beat of cyberpunk.

With a quick twist of her ankle, she
turned into a maze of alleys that tunneled through the downtown
precinct. Nikolai had expressly told her to avoid the front door
for obvious reasons.

Her appearance at the police station
would no doubt sow rumors among the officers, a potential stain on
Nikolai’s reputation. They couldn’t allow that, now could they? No
one could know what would transpire tonight.

Vivian paused outside a door in the
alley and gulped down her anxiety. She was twenty minutes late.
Perhaps he had already abandoned hope of her arrival and left.
Maybe he would collect her the following day as
punishment.

She shivered at the memory of those
handcuffs pinching her wrists. Vivian found herself stroking the
marks they left on her fragile arms.

Her heart skipped erratically as she
wrenched open the door and stepped inside. The office was bathed in
a bluish glow. The light cast a pall across a dark figure slouched
over his desk.

For a moment, Vivian thought Nikolai
Koslov was dead. Then she saw the glitter of his serpentine eyes
and she knew that blood still flowed through his cold veins. He was
concentrating intently on the crime reports in front of him.
Raising his head from the compilation of reality’s horror stories,
he smiled coyly at Vivian.

Had she declined his invitation, she
would inevitably be looking at him from behind iron
bars.

Nikolai’s dark hair glistened with
rain from poking his head into the alley in search of her.
Nonetheless, her delay was acceptable; he could not afford to
alienate her now.

He smiled handsomely at his guest as
she sidled into the chair opposite from him.

“
I’m glad you could see me
today,” Nikolai said, granting her the illusion of choice. “We’re
going to discuss the matter of your attempted homicide.”

His words were like a vice clenching
her airway. Suddenly, Vivian could imagine being arraigned before a
court of strangers, held without bail, confined to a
filth-encrusted cell. Her earnings had been confiscated and she
couldn’t afford a lawyer. She could claim to be destitute, but she
would be appointed an incompetent lawyer like all the downtrodden
souls. Maybe she could sneak back to her apartment and access the
hidden cache of money under her mattress…

“
No one knows about what
you’ve done except for me,” Nikolai remarked, interrupting her
fantasy. “I’m the only barrier between you and prison.” Ever
cautious, Vivian searched his face for signs of deceit, the
slightest twitch of his lips or gleam in his eyes.

“
Aren’t you committing a
crime by concealing what I’ve done?”

“
I’ve already filled out a
report. But let’s say I misplaced it.” He looked down at the
newspaper clippings on his desk, and Vivian found herself
mesmerized by the words.
Family files
missing report in slew of mysterious disappearances.

Nikolai dropped hints here and there
about a case that had perplexed the authorities for months.
Sometimes, he would have news reports strewn across his desk as
though monitoring the media outlets. Perhaps there was something
related to the investigation he did not want leaked.

“
What do you know about the
disappearances around Prague?” he asked.

“
You mean the
runaways?”

“
Is that the headline the
media is running with now?” She reached for the article but
Nikolai’s hand fell like a guillotine, scraping it closer toward
himself.

“
You want me to help track
down these women?”

“
No, Vivian, that won’t be
necessary. We found them.” Her gaze fell to the folder on his desk.
“Contrary to what the media has been feeding you, these women were
dragged from their apartments and butchered. Each one.”

“
No, Vivian. You do.” Her
thin eyebrows arched with intrigue.

“
What the hell is that
supposed to mean?” Nikolai folded his hands and peered at her from
across his desk. He must have perfected that calculating gesture
many times as he gambled with criminals’ lives over morsels of
information.

“
Despite what you may think
of me, I am your only ally in this Godforsaken world. You have one
last chance to re-enter society, Vivian. I only ask for a favor in
return.” The young woman threw her head back and
laughed.

“
My life has consisted of
nothing but favors. Here, I thought you were different from most
men.”

“
I’m sure it’s not your
usual request.”

“
You have no idea the
things I’ve done.”

“
And I prefer to keep it
that way. The less I know, perhaps the less compelled I will feel
to arrest you. Now you have a decision to make, possibly the most
significant decision in your life; spend the next few years of your
life in prison or take a risk.”

“
What does that risk
entail?”

“
If you aid me in my search
for this killer, consider all charges against you dropped.” He
flipped casually through photos associated with the case, keeping
them just out of periphery of the light. “Your aggravated assault
charge will be dropped, as will your numerous…
solicitations
.”

“
This case means a lot to
you, doesn’t it?” Nikolai inclined his head to regard her with
bloodshot eyes. He looked as though he hadn’t slept in the past
twenty-four hours. From the looks of his workspace, he had been
frantically searching for something—likely a resolution to the
case.

“
Yes,” he stoically
replied. “This sick freak needs to be stopped. You have no idea
what he has done.”

“
Maybe you should enlighten
me before sending me into danger.” A sly smile creased his
lips.

“
Trust me, you don’t fit
his type. I doubt you will come to harm.”

“
I am protecting you from
emotional distress, Vivian. You don’t want to see the
photos.”

“
No!
Under no circumstance is anyone to see the evidence collected
here. The inevitable media frenzy will destroy this case. For all
the killer knows, his crimes have gone undetected. If the public
learned about this…” He shook his head. “The community doesn’t need
to know.”

“
They don’t need to know
that a psycho is on the loose?”

“
Are you familiar with the
proverb ‘Ignorance is bliss?’” Vivian watched him toy with his pen,
wondering where this would lead. He smiled innocently. “Don’t
shatter the public’s fragile state of bliss.”

Vivian puffed a cigarette in the
alley, excusing herself from the clandestine meeting. She didn’t
like the path Nikolai was leading her down. How many others had he
extorted under similar circumstances? Was she just another casualty
in a long list of forsaken souls striving to re-enter society? She
ground her heel into the cigarette on the concrete, extinguishing
its last gasp of smoke.

Vivian thrust the door open to the
office. Nikolai’s eyes were fixed on the doorway as though his gaze
could penetrate the walls and observe her.

The scent of smoke trailed Vivian as
she begrudgingly rejoined her “only ally.”

“
I’m confident you can help
me,” Nikolai urged, wasting no time. “Your relations with the…
shady sect of Prague will give you an edge. You can do things that
I cannot do as a member of law enforcement.”

“
You can gain their trust.”
He leaned back in his chair with a boisterous sigh. “Vivian, how do
you want this night to end?”

“
I want to wake up and
learn this was just a terrifying dream.” Nikolai regarded her with
a façade of pity. Perhaps his sympathy was genuine.

“
I wish I could turn back.
I wish I had never …” She didn’t need to elaborate on that thought.
Nikolai already knew what she was guilty of. “I wish I found a
better way to pay for college.” Nikolai reached into a metal drawer
and produced a manila folder.

“
I have your academic
transcript from college. You have a G.P.A. of 3.8, well above the
average. Your first two years at college were strewn with 4.0’s.
Why is a smart girl like you on the streets?”

“
I’m willing to help you,
Vivian. I can drop the charges against you and aid you in the
application process for a university.” Her eyes lit up like once
hazy streetlamps infused with light. Albeit, her eyes glistened
with scarlet contacts that would no doubt keep wary travelers at
bay. “I will arrange for scholarship opportunities,” Nikolai
continued. “You have the potential to amount to so much more
than…
this
. The
reward for information leading to the arrest of this killer is
substantial. Do you realize how much it is?”

“
Fifty thousand American
dollars. I’m willing to give you sixty percent of the
reward.”

“
You honestly think I need
the money? Breaking this case will catapult me to fame and pull me
out of this wretched hole. I’ll have my time to make a higher
salary when I’m promoted.”

Gladiatrix by Rhonda Roberts
Party Lines by Fiona Wilde
bullied (Possessed #0.5) by K.L. Donn
Flat Spin by David Freed
Lot Lizards by Ray Garton
A Time of Gifts by Patrick Leigh Fermor
Microsoft Word - Cinder-Marie_Sexton.doc by Dawn
Leaving Sivadia by Mia McKimmy
Death 07 - For the Love of Death by Tamara Rose Blodgett
Lone Wendy: The Girl and the Forest of the Gods by D E Dunn
Our partner