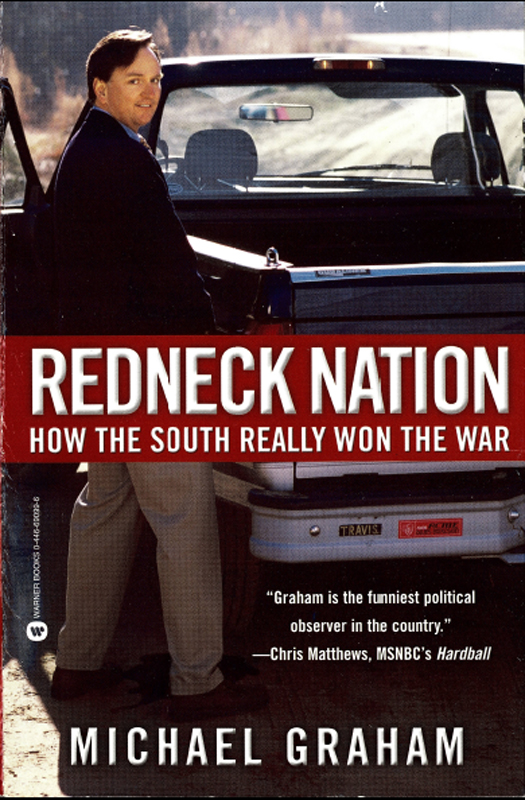 You are living in a
REDNECK NATION

“Yes, Northerners and Southerners talk differently, and, yes, we eat differently and vote differently and express our arguments
differently, but the same Old South principles are at work. Somehow—and I’ll be damned if I can figure it out—the South lost
the Civil War of 1860, lost the civil rights struggle of 1960, but has managed to win the battle of ideas.

“This is not a good thing. The South is a land of few ideas, nearly all of them bad. And if you’re a typical modern Northern
American, they are probably yours.”

“Michael Graham may make you laugh or he may really annoy you, but one thing is for certain: He’s the funniest person ever
to come out of Pelion, SC.”

“Hilarious…. [Graham] examines the peculiar phenomenon with a cynical wit that spares no one, including himself.”

“Graham takes a hilarious, albeit painfully honest, look at what he believes is America’s cultural collapse.”

“Michael Graham has written an adroit and devastating cultural analysis with at least one laugh on every page, but what really
makes REDNECK NATION memorable are the number of times I stopped in mid-laugh to find myself thinking, ‘Oh, God help us, it’s
true.’”

“Redneck is only another term for WASP, and this book infused me with a deep and disturbing sense of Anglo-Saxon identity
politics.”

“Michael Graham proves you can be Southern, funny, and smart!”

To my father, Simon Graham of Horry County, SC, who taught me never to trust a Yankee; and to my mother, Patricia Futrell
Graham of Los Angeles, CA, who told me that nothing good ever came out of the South.

You were both right.

You are living in a REDNECK NATION

2. How the South Really Won the War

6. Nothing Gets This Bad Except on Purpose: Redneck Education

13. Taken to the Extreme

Epilogue: Confessions of a Reluctant Southerner

My first college roommate at Oral Roberts University was John, a thirty-seven-year-old captain in the Nigerian Army. We were
thrown together in one of those inexplicable twists of fate that are, for me, indisputable truth that there is a God and He
writes for Monty Python.

I was an eighteen-year-old white kid straight from the rural South. A graduate of the South Carolina public school system,
I came to Oral Roberts because of a deep, spiritual calling to attend whatever university was farthest from South Carolina
and offered me a full scholarship. That’s how I ended up in the shadow of the Prayer Tower in Tulsa, Oklahoma.

John spoke seven languages, none of them English. At least, not that I could tell. And though he was an officer in a national
army that regularly fired on its own citizens without apology, John himself was a gentle, almost gregarious man. That fact
did not lessen the shock a southern white boy feels on his first morning away from home when he is awakened at dawn by a large
black man in Nigerian cammies doing anticommunist calisthenics at the foot of his bed.

John had never been to America before. His knowledge of our country came almost entirely from his exposure
to commercial television back in Africa. And so our first conversation went something like this:

JOHN: Where were you born, Michael?

JOHN: Oklahoma! Cowboys, Indians, Wild West! So where do you live now?

ME:     Actually, I grew up down in South Carolina…

Later that night, I found him checking my pillowcases for eyeholes.

Here’s a guy from Africa who doesn’t know Montana from Maryland and thinks Walt Disney was one of our greatest presidents,
but he knows enough about the South to assume that every white guy from South Carolina is in the KKK.

I didn’t think much of this southern stereotyping at the time because I was used to it. In fact, not only was I unfazed by
charges that white southerners were racist, redneck hicks, I was an enthusiastic witness for the prosecution.

There is no other way to put it: I hated growing up in the South. From the age of six, I lived in the rural town of Pelion,
South Carolina, a picturesque community of 211 hearty southern folk, where I spent my formative years running from large,
hairy people named “Bubba,” many of them women.

The public school was a single campus that accommodated
all twelve grades, so I spent my entire educational career with the same group of drawling, intellectually uninspired mouth-breathers,
most of whom thought I was a pinhead who read too many books.

I spent my summers cropping tobacco in the Pee Dee region of South Carolina, home of NASCAR’s Darlington International Speedway
and one of America’s highest rates of sexually transmitted diseases, which, due to local cultural traditions, would often
spike immediately after large family reunions.

It was during one of these summers working tobacco that I learned how powerful racism was as a social force in the South:
A black coworker pulled a knife on me late one afternoon in one of the sweltering tobacco barns. Back then the barns were
tall, narrow, heat-holding structures with huge rails—skinned tree trucks, actually—used for hanging sticks of green tobacco
while they cured. My black assailant was only half serious and we were both very young and who knows if we were on the verge
of a fight or a tutorial on fingernail cleaning, but when the knife appeared, the same redneck barn workers who had tortured
me throughout the summer began dropping from the railings above to rescue me. They seemed to appear out of thin air, like
Army Rangers dropping from Black Hawks in a firefight.

After beating the crap out of the black field worker and his friends, one of the older boys in the group looked at me and,
seeing the wonder across my face, said, “Don’t worry—we still hate you, too.”

To this day, I think he meant it in a nice way.

Back home, my family and I attended a series of small
evangelical churches, the kind where the casting-out of demons was a regularly scheduled part of services. These were old-time,
red-meat “Thank you, Jesus!” southern churches with a Pentecostal flair. I never attended a church with a mainstream name:
no First Baptist or Elm Street Methodist. No, we always seemed to be the newest members of places called Springdale Revival
Center or Shekinah Temple or God’s Gonna Smite Yo’ Ass-embly of God.

And so I grew up going to church four or five times a week and playing “fuhtbawl” and hunting squirrels and getting called
“nigger lover” and having the Great American Southern White Boy Experience. All that was missing was a banjo and severe dental
problems.

Which is why I never complained when Northerners (or Nigerians) cracked wise about me or my homeland. When I saw movies or
TV shows mocking the South as an inbred backwater of racial obsession, good-ol’-boy politics, and
Hee Haw
culture, I didn’t grouse because I knew they were right. All I had to do was look around my living room.

But I also inferred that these Northerners who were looking down on us were doing so because they were different. I just assumed
they mocked southern ideas and attitudes because they, as Northerners, found them at the least strange, at the most repulsive,
and, under any circumstances, unacceptable.

So it threw me off my stride when, less than fifteen minutes after arriving in Boston, Massachusetts, for the first time,
the very first white person I spoke to used the word “nigger.”

I had just pulled into town and needed directions. I
stopped at a gas station where a burly, blue-shirted white guy with his name over the pocket barked at me (or is that “baaked”
at me), “You’re all turned around, buddy. This is Nigger Town.”

My head almost snapped back. Here I was, eight hundred miles north of the redneck wonderland I had fled in rural South Carolina,
and the first Yankee I talk to is a racist idiot. I couldn’t believe it. Then I saw him glance at my out-of-state license
plate. “Aha,” I thought to myself, “he’s just going native on me as a southerner. It’s really my fault,” I told myself in
a pathetically codependent way.

And in a way, it
was
my fault. I spent six years doing stand-up comedy, traveling to forty-one states and performing for thousands of people;
I spent six more years working as a GOP political consultant in places like Chicago and Westchester County, New York, talking
to volunteers and voters from both sides of the political aisle. And inevitably I found that not only did northerners assume
I was a closet Klan member but they had my tacit permission to slip on the intellectual white sheet as well.

In 1997, I was at a cocktail party in Westchester County, which is ground zero for limousine liberalism in America, the kind
of place where Bill Clinton’s annoying mix of self-absorption and self-righteousness would fit right in. Surrounded by Manhattan
expatriates, SUV socialites, and liberals with causes, I happened to mention that I’m from South Carolina. It turns out one
of the gathered had gone through army basic training at Fort Jackson in Columbia. Without so much as a sidelong glance, he
tells me:

“I like you southerners. You sure know how to handle your niggers.”

I have since discovered that incidents like these are
hardly the exception. Yes, I realize that anecdotes alone aren’t sufficient for drawing grand conclusions about society north
of the Mason-Dixon line. But after a lifetime fleeing my southern heritage and looking for that place in America that practices
(for the lack of a better term) “Northernism,” I am persuaded that no such place exists. As Gertrude Stein said of Oakland,
there is no there there.

I’ve eaten Maxwell Street hot dogs near Chicago’s Cabrini Green, Norwegian
lefse
in Minnesota, sturgeon from the Columbia River, lobster rolls in Massachusetts, ribs in Kansas City, homemade salsa in Los
Angeles, and mounds of fries and gravy at the diner around the corner from the Improv in New York.

I’ve driven through the Rockies a half dozen times, gotten into arguments with snot-nosed college pukes on the steps of a
Boston comedy club, suffered through a program of awful Italian folk songs sung in worse Italian by Sicilian wanna-bes in
Yonkers, New York, and had a shotgun pulled on me at a gas station in Umatilla, Washington.

The Years After by Leanne Davis
Carinae Sector: 01 - Traders' Scourge - Part 2 - Maveen Offer by David Buck
Shut Up and Give Me the Mic by Dee Snider
The Valley of Dry Bones by Jerry B. Jenkins
Running on Empty by Don Aker
Hotel Transylvania by Yarbro, Chelsea Quinn
Sweet Trouble by Sasha Gold
Twisted Souls (The Alpha Boss Book 2) by Deva Long
Hard Drivin Man by Cerise DeLand
Blank Slate (A Kyle Jackle Thriller) by Hamric, Zack
Our partner