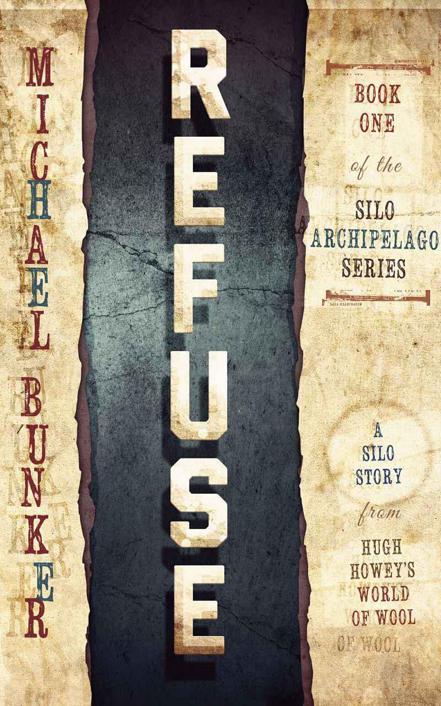 This book is a work of fiction.  Names, characters, places, and events either are the products of the author’s imagination, or are used fictitiously.  Any resemblance to actual events, locales, or persons, living or dead, is entirely coincidental.

All rights reserved.  No portion of this book may be reproduced in any form, except for brief quotations in reviews, without the written permission of the author.

My thanks to Hugh Howey for letting us write stories that take place in his world.  Special thanks to Jason Gurley, who wrote the awesome GREATFALL series, for the incredible book cover, and to the League of Official Woolwrights (LOOW) for your help and encouragement in bringing this story to print.

I put a piece of paper under my pillow, and when I could not sleep I wrote in the dark.

самизд
а́т
; IPA:
[
səmɨzˈ
dat]
) was a key form of
dissident activity across the Soviet bloc in which individuals reproduced censored publications by hand and passed the documents from reader to reader. This grassroots practice to evade officially imposed censorship was fraught with danger as harsh punishments were meted out to people caught possessing or copying censored materials. (From Wikipedia)

Praise for the WICK Series

Other Books by Michael Bunker

Part 1 of the Silo Archipelago series

Hugh Howey has been so gracious in encouraging other writers to participate in his fantastic Wooliverse by writing fan fiction within that universe.  It’s been exciting to read so many quality stories coming from fans of the WOOL books.  For the most part, I’ve been just a happy bystander and fan throughout the Wool phenomenon.  As a lark, for a writing competition put on by an e-magazine in England, I did write a little comedy/satire piece that included Hugh as a character, but that story (#NaNoWri War Z) was not
literally
fanfic, since it did not take place in the Wool universe.  Hugh happily gave me permission to use his story and likeness in that quirky little bit of zombie comedy, and I am so grateful to him for that.  Other than that, I’ve just been a reader and a fan.

And then I had an idea.

The Wool world is so ripe for stories and tales that might be completely different than the primary tale that Hugh was telling in his books.  Being a self-published writer who has seen some limited success, I wondered what someone like me would be doing if I were trapped in a silo.  Would I be writing and publishing my work?  I also happen to be a Russophile who loves Russian literature and history.  I’ve long been interested in the phenomenon of SAMIZDAT in the former USSR, which was the underground publishing system used by dissidents to publish unapproved books during the Soviet era.  My favorite author and hero is Alexander Solzhenitsyn, a brilliant writer and dissident who took on Stalin and the whole Soviet apparatus for the right to publish the things that he wrote.  He published his famous book
A Day in the Life of Ivan Denisovitch
using SAMIZDAT, an underground group of individuals who hand-wrote or hand-typed illegal manuscripts and distributed them throughout the Soviet Union.  The word SAMIZDAT literally means “Self Publishing” so I thought that a parallel story taking place in the silo might be of interest to Wool readers.  I hope that it is.

REFUSE is a short story about a woman named Leah, a
picker
whose job it is to sift through the refuse and waste of the silo in order to achieve the goal of recycling everything.  On her own time, Leah loves to make homemade paper and lives to write stories.  She just happens to exist in a dystopian world that has been destroyed by mankind, and lives in an underground silo full of mysteries and questions.  The problem is that both of these things, making paper
and
writing stories, if they are not approved by the authorities in the silo, are illegal.

I thank Hugh Howey for giving me permission to write this story and to publish it.  I hope you all enjoy it.

Leah was a
picker
, and as a picker she now stood hip deep among the seemingly endless heaps of garbage, carefully opening the reclamation bags one by one, sorting through the contents and tossing the bits and pieces of refuse into the appropriate wooden separation bins for recycling.

Wood
.  The separation bins were made of wood.  Heavy, sturdy, ancient wood, hardened by time, shiny and smooth from use, and aged by the tempering of many hands.

Leah had never seen a real tree, unless you count the little wispy olive trees on the farming floors.  She’d visited the farms as a girl in school, like every young person did, and there she’d seen the olive trees lined up in rows like emaciated soldiers standing erect under buzzing grow lights.  She knew, however, that those trees could never have produced enough wood to make even one of the sturdy bins she used daily to sort through and recycle the tons of waste produced continuously in the silo.  These bins were antiques, relics of another time and place.  They were reminders that everything in the silos originally came from somewhere else, and that there had once been another world and another kind of life—one that wasn’t lived underground.

Thinking things like that can make your head spin and it might lead to trouble
, but she thought such things quite often anyway.

The silo had six recycling units, spaced at regular intervals all the way from the up-top down to the down-deep.  The recycling sections were fed by chutes that never ceased feeding color-coded bags of garbage to the recycling floors.  Everything was recycled in the silos.  Even the plastic reclamation bags.  Dozens of pickers in each recycling section sifted through the garbage with gloved hands and separated out every piece of refuse into the appropriate wooden bin for re-use.

No one monitored the pickers—at least, it could be said that they weren’t monitored very closely—but if a picker got caught stealing paper, they’d be in big trouble.  Everyone knew that.  Depending on what you were doing with the expropriated paper, you might even get sent to clean. That should tell you something about the value of paper in a closed society.  In a very real way, the death penalty was annexed to the concept of paper and its use.

As she thought about these things, Leah recalled the mental image of a great man—to her, maybe he was the
greatest
man—and she remembered the day he was sent to clean.  Even after two years, it seemed to her like it had only happened yesterday.

She’d shadowed under Alexander, her greatest friend and mentor, until he was sent to clean for the twin crimes of
procuring or producing black-market paper,
and
the illegal use of recyclable material.
It all happened so quickly.  Almost no time passed between Alexander’s arrest and the carrying out of his sentence.  She’d been given very little time to say goodbye, and even less time to consider what losing the old man would really mean to her.  Now, she’d been without Alexander’s wisdom and guidance for two long years, and his absence was like an open wound in her heart and mind.  She looked down as she shifted the bin closer to the stacks of bags.  She was strong and lean and not unattractive at all, if the attention she was paid by the men her age was any indication.  Her long dark-brown hair was pulled back in a ponytail to keep it out of her face as she bent over to move the bins.  Every time she gripped the wooden handles of a recycling bin, or peeled a piece of illegal, black-market paper from its screened frame, she thought of Alexander, and of trees immense and beyond the restraints of the imagination.

Alexander had often talked in hushed but respectful tones about towering trees and endless forests and paper so plentiful that people used it to wipe their chins and even their butts… and seemingly endless reams of paper used to write books so numerous that they couldn’t even be counted or contained in any single library.

Leah wasn’t sure how he could possibly know about such things.  Maybe he’d derived those fanciful ideas from the childhood books stacked in cubbies in the silo’s classrooms.  Or maybe he’d drawn knowledge from some other source of ancient wisdom known only to the men and women of the mind.  In any case, he was an old man who knew how to stoke the fires of imagination in others.  He was the one who’d encouraged Leah to read, and to write.  Now she wrote every day,
so long as she had paper upon which to scribble her words
.  She wrote earnestly and purposefully, with Alexander’s entreaties always hovering before her, imprinted in her mind and soul:

“In every age and every time, for the prophet, the revolutionary, or the artist, the act of writing is the act of pouring out one’s life onto paper.”

So she wrote every day, sharpened charcoal gripped firmly in a needy hand.