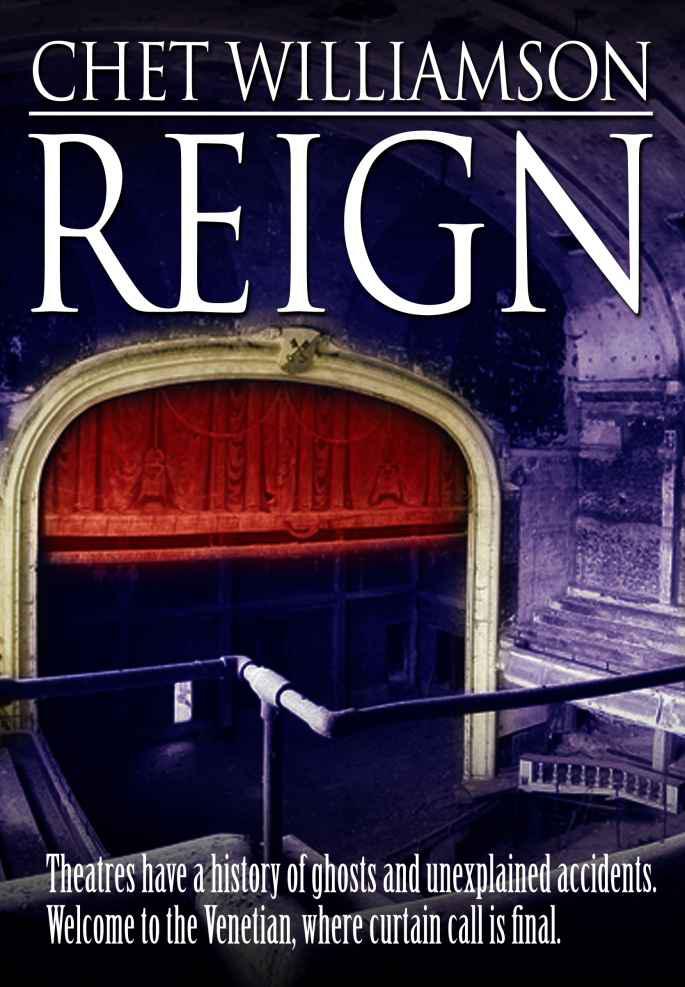 Reconstructed from scans and copy-edited by David Dodd

If you're reading this book and did not purchase it, or it was not purchased for your use only, then you should return the vendor of your choice and purchase your own copy.

OTHER CROSSROAD TITLES BY CHET WILLIAMSON:

Buy Direct From Crossroad Press & Save

Try any title from CROSSROAD PRESS – use the Coupon Code FIRSTBOOK for a
one time
20% savings!

We have a wide variety of eBook and Audiobook titles available.

"For Chief and D, and Fred and Lee, and everyone with whom I've walked the boards. And most of all to Laurie, for her incomparable performance in supporting roles through the years."

Of all arts, the most difficult was the art of reigning.

Gibbon,
Decline and Fall of the Roman Empire

Here we may reign secure, and in my choice

To reign is worth ambition though in hell:

Better to reign in hell than serve in
heav'n
.

Dennis Hamilton watched. He had no choice. He was once more a captive of his dream, a slave of the very emperor he had himself been for the last quarter of a century, the character he had created. And now that character came to life before his eyes, stood there grinning as nakedly as if the skin of the face were transparent, revealing the skull beneath.

Who, Dennis wondered, would the Emperor kill tonight? Which of the people he loved? His wife? His son? John, his manager, or
Marvella
, his costumer, or Curt, his stage manager? Night after night, he had taken them all in dreams, killed them all by grasping their necks in his left hand, which seemed as huge and monstrous as the necks seemed thin and frail, and shaking them until those pencil-necks snapped with the sound of cracking twigs, and the bodies had fallen like empty sacks, and the grin had widened until it threatened to raven the world, and Dennis would awake with tears in his eyes, and turn and clutch Robin's warmth, waking her to comfort him.

Who tonight? Who? He saw her then, dimly at first, as through a fog, or a gray-tinted window, but he recognized her immediately. Though twenty-five years had passed, he knew her, for he had never forgotten, never stopped feeling what he had felt when he was so young, when emotions had been taut as wires, sensitive as exposed flesh in winter.

She was older, but still as lovely as he remembered. Her honey-blonde hair was shorter than it had been, but still long, falling to her shoulders like a veil. She wore a dress — or was it a gown? — of white. She seemed, Dennis thought at first, dressed for a wedding.

But when the Emperor stepped into the frame of his sight, he knew instead that she was dressed for a sacrifice.

Ann's neck did not change, did not diminish and thin as the others had. And the Emperor's hand, when he grasped her, no longer grew in size. A hand it remained, though one with great strength. It squeezed, and Dennis saw Ann's face go white with pain, though there was no fear in her eyes. She looked, not at her attacker, but at him, and in her gaze was mingled a plea and a longing, both emotions mirrored in his own thoughts.

He moved toward her as he had with all the others, to save and to protect. But unlike before, when the thick and fluid bonds of dream held him back, now he flew forward with a dazzling speed that blinded him, and when he could see again, he knew that it was
his
hand that was clutching Ann's throat,
his
eyes that were blazing into hers, those green spheres clouded with approaching death.

He gasped, and tried to release his grip, loosen the fingers that dug into the flesh so deeply that the tips were hidden.

He could not. The fingers, his but not his, pressed harder. The eyes refused to obey his demand to close, the mouth, rebel to his will, grinned with teeth he could not see, and Ann faded away as she had on that day long ago, from his sight, from his love, from his life . . .

Dennis Hamilton awoke weeping. His body was slick with sweat, and he felt hot and cold at once.

He grasped at her, and when he felt her arms go around him, he let himself go completely, let the sobs shake his body.

"The dream?" she asked. "The same dream again?"

"Yes," he said. "The same." It had come at irregular intervals, unpredictably and unexpectedly, for nearly a year.

He didn't answer right away, and he could sense her curiosity in the dark. To give him time to decide what to say, he reached up and turned on the dim reading light over his side of the bed.

"You're sweating," Robin said. "Do you feel all right?"

She looked so young in the rose-colored light. Her dark hair cupped her face like a pair of gentle hands, and the edge of the sheet was draped over her waist, exposing her full, round breasts. Dennis felt desire trying softly to usurp his previous apprehension.

"It's just a dream," she said, reaching out and smoothing the damp hair back from his forehead. "Dreams can't hurt you."

"But it frightens me," he said, taking her hand and pressing it to his cheek. "It seems so real, and I worry about . . . about what it might mean."

"We've talked about this before," she said with a sigh, "and you're not angry at me, darling. You're not angry at any of the people you've seen hurt in your dreams, even if you are the one who's doing the hurting."

She touched his cheek. "After tomorrow there won't be any emperor anymore, will there? You can replace him with another dream — a dream you've had for so long. One that's going to come true."

He smiled at her, remembering. "Yes," he said finally. "I guess it will."

"Can you sleep now?" she said. "It's going to be a big day. A very big day. Shall I call Sid? Have him fix some warm milk to help you sleep?"

"No. No thanks. It's all right." He turned off the light and put his head on the pillow. Robin leaned over and kissed him.

"And I love you," he said, meaning it. But he went back to sleep remembering Ann.

Morning came, and then the night. The last performance was glorious.

He sat before the mirror, gazing at the man within. The face was older now. Nearly twenty-five years had passed since he first saw the Emperor inside him, twenty-five years since that first night, that night in 1966 that set the pattern of his life as firmly as heredity.

Had the audience dozed, had the critics been unkind, had he been in poor voice, or nervous, or forgetful, his life would have been very different. But those things had not happened, and he had been crowned Emperor of the Theatre, and had remained so for a quarter of a century, longer than many real emperors, or kings, or popes. Until tonight. Until this warm April night, on which they roared out their acclaim for a voice still young, still as strong as ever, roared for the full, rich, velvet baritone with which he had enthralled audiences across the country, around the world. His world. His circumscribed and loving world, girdled with his talent, governed by his persona, ruled by the Emperor.

Still
, Dennis Hamilton thought, looking into the mirror,
it was not the voice that really mattered, was it?
It could have been aged and withered, made harsh by the nicotine he never inhaled, pickled by the alcohol he seldom touched, constricted and parched by the cocaine that floated all around the New York theatre scene like a gritty cloud but which he had never even tried. No, it was not the voice, but the
presence
.

The stance was enough to tell anyone that. The stance at the beginning of Act I, Scene 6, when the change came. The hands locked commandingly behind the back, the thrust of the jaw, lengthened by the beard, that long
Ruritanian
beard that he had never shaved off, dashed now with specks of gray not yet visible from the audience. He could have dyed it, but that would have been vanity. Besides, they all knew he was no longer twenty, and it would not have diminished their love. No. The world knew that he had based his life on artifice, and the world had made him a rich man because of it.

Only Alien on the Planet by Kristen D. Randle
Every Wickedness by Cathy Vasas-Brown
Highlander's Rebellious Love by Donna Fletcher
The Investigation by Jung-myung Lee
His Name Is Sir (The Power to Please #3) by Deena Ward
Remove the Empty Spaces by T.A. Chase
Unforgotten by Clare Francis
Alicia's Folly by C A Vincent
Little Labors by Rivka Galchen
Harbinger: The Downfall - Book One by Travis I. Sivart
Our partner