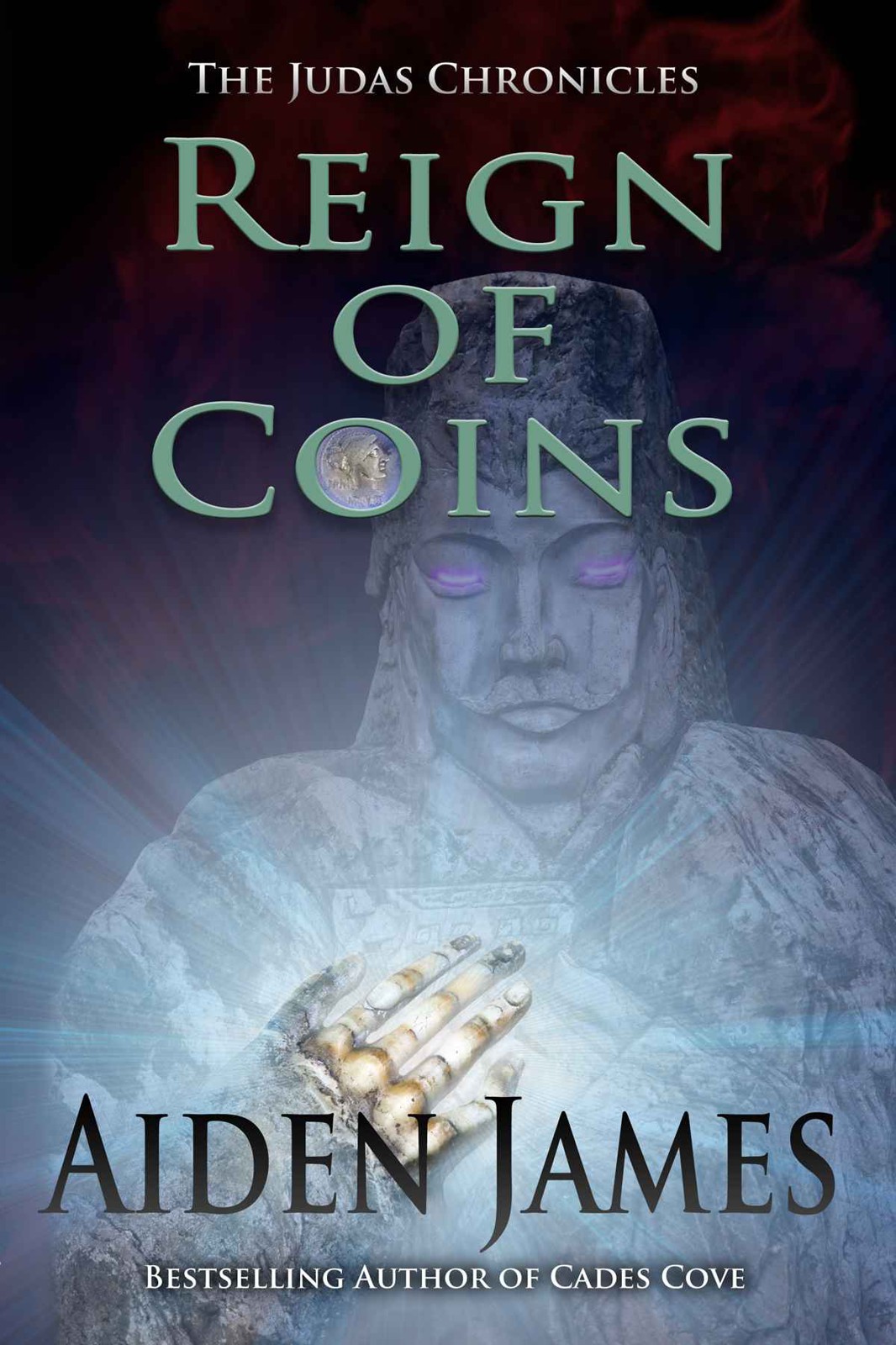 Based on an Original Concept by

“Aiden James has written a deeply psychological, gripping tale that keeps the readers hooked from page one.”
Bookfinds review for “The Forgotten Eden”

“
A variety of twists, surprises, and subplots keep the story moving forward at a good pace. My interest was piqued almost immediately and my attention never wavered as I forced my eyes to stay open well into the night. (Sleep is overrated.) Aiden James is a Master Storyteller, whose career is on the rise! Out-freaking-standing-excellent!”
Detra Fitch of Huntress Reviews, for “Plague of Coins”

“The hook to this excellent suspense thriller is the twists that will keep readers wondering what is going on as nothing is quite what it seems. Adding to the excitement is that the audience will wonder whether the terror is an evil supernatural creature or an amoral human…Aiden James provides a dark thriller that grips fans from the opening.”
Harriet KLausner, for “The Forgotten Eden”

“Aiden James writing style flows very easily and I found that Cades Cove snowballed into a very gripping tale. Clearly the strengths in the piece were as the spirit's interaction became prevalent with the family…. The Indian lore and ceremonies and the flashbacks to Allie Mae's (earthly) demise were very powerful. I think those aspects separated the work from what we've seen before in horror and ghost tales.”
Evelyn Klebert, Author of “A Ghost of a Chance”, “Dragonflies”, and “An Uneasy Traveler” for “Cades Cove”

“The intense writing style of Aiden James kept my eyes glued to the story and the pages seemed to fly by at warp speed…. Twists, turns, and surprises pop up at random times to keep the reader off balance. It all blends together to create one of the best stories I have read all year.”
Detra Fitch, Huntress Reviews, for “The Devil’s Paradise”

“Aiden James is insanely talented! We are watching a master at work….Ghost stories don’t get any better than this.”
J.R. Rain, Author of “Moon Dance’ and “Vampire Moon” for “The Raven Mocker”

Reign of Coins by Aiden James

This ebook is licensed for your personal enjoyment only. This ebook may not be re-sold or given away to other people. If you would like to share this book with another person, please purchase an additional copy for each person you share it with. If you’re reading this book and did not purchase it, or it was not purchased for your use only, then you should return to your favorite ebook store and purchase your own copy. Thank you for respecting the hard work of this author.

I sometimes worry that my quest to reclaim the ransom I was once paid to betray Jesus Christ won’t be worth it in the end. After all, recovering twenty-two of the thirty silver shekels has proved to be an often arduous and dangerous avocation. For centuries the stakes only involved me, and I suffered more than a dozen deaths in my efforts to track down each shekel—coins that all carry a terrible curse to anyone foolish enough to fall for their subtle allure. Often my deaths would end up transporting me to someplace new upon this grand planet. Sometimes five minutes later, and other times after years had passed in my absence. Regardless, as a cursed immortal, having to start over again and again has been more than a tad irritating.

It might seem The Almighty is given to a cruel sense of humor. However, I’ve come to understand each trial and circumstance is a honing moment for my very soul. It’s an old soul, and one that has tried gracefully to carry the considerable penalty dealt for my terrible folly two thousand years ago. Yet, despite my greatest efforts to gain leniency, at the end of the day I remain the greatest villain and most reviled human being ever to walk the earth.

I am Judas Iscariot.

But, please…call me William. William Barrow, and on a mission to find eight more silver shekels, in hopes that possession of all thirty coins will reverse my terrible curse of eternal life on earth.

Until recently, I’ve enjoyed relative anonymity as William Barrow. A Smithsonian Institute archivist for nearly a dozen years, I recently left the famed institution for reasons I’ll soon explain. The New World has been my home for much of the past six hundred years, but it may soon end forever. It began with one particular death in England that transported me to the Appalachian region in the year 1450. The Cherokee called the land at that time
Shaconage
, and were the first to befriend me.

I’d really hate for the love affair with America to end soon.

Due to a certain government agency’s refusal to accept my status as a free
civilian,
instead of an indentured servant, I may no longer have a choice. My beloved son, Alistair, and my equally beloved and vulnerable wife, Beatrice, are in grave danger as long as the CIA refuses to accept my warnings about Viktor Kaslow.

This brief overview brings us to the present moment.

“How long is our flight, again?” asked Alistair. He stared absently out the jumbo jet’s window. His body grows younger every day, but fatigue from jet lag had set in after a twelve-hour flight from Honolulu to Japan. It could only worsen during our current jaunt from Tokyo to Hong Kong.

“Four hours and twenty-five minutes,” I said. “We have roughly three hours to go. You can rest as long as you need when we get to the hotel.”

A grunt was his only response. It brought an image to mind of when he was an ornery adolescent in Glasgow. By then, Beatrice had begun to eye me suspiciously. The subtle lines upon my face had yet to change…and never would. Meanwhile, the crow’s feet around her eyes were deepening.

“At least we’re in first class, and not coach,” I teased. “If you’d allow me to pull the blind to cover your window, you might forget we’re in perpetual daylight.”

“Pops, I know what frigging time it is—probably better than you do!” he said, disdainfully, his Scottish brogue shining through.

“Should I call for the flight attendant? It appears someone’s blood sugar is running low.”

My grin seemed to infuriate him more. I’ve never been able to resist a good taunt when available—a trait that once infuriated Simon, the disciple who became Saint Peter. Alistair’s deep brown eyes grew dark, but then his expression softened. He pointed at a petite blonde walking toward us carrying a small iPod.

“It looks like our stewardess is bringing you a small toy, Pops. Perhaps it’s something to pacify you and allow me some peace and quiet for awhile.”

She studied us while wearing a slightly flirtatious look. I’ve often thought my son bears similarities to Sean Connery, in the later years of the famed Scottish actor’s film career. Their eyes twinkle with the same laughter when amused, and their strong brows are identical. They sound alike when they speak, and even their smiles are similar. Until recently the facial lines and white hair thinning along the crown was similar, too. After my son picked up a sack full of crystals from a sacred cavern in Iran last year, he has steadily gotten younger, and by at least a decade since then. A more youthful Connery, perhaps?

As for me, you may have heard I’m forever stuck in my early thirties. I’m blessed with standard Hebrew comeliness, and I’ve often been told my deep blue eyes reveal the ongoing torment in my soul that somehow enhances my smile. Some might call this sort of thing disarmingly handsome. If so, it seemed to be working right then.

“Yes,” we answered in unison.

The flight attendant named Nancy blushed, and moved over to where I sat.

“You must’ve lost this when you boarded the plane.” She handed me the device. A blue Nano-6g, my name was engraved upon the back in my preferred leaf script. I’d never beheld the damned thing before. Someone had left it on the plane prior to when we boarded our flight.

“Well, are you going to just sit there and admire it, without turning it on?”

At least Alistair was smiling again. It used to be an easy sell to convince people unaware of my real identity that he is the
father
, and I’m the
son
in our relationship—the inverted truth. Everyone we know in D.C. still believes our reversed roles, although my son’s recent ability to shed years like Nutrisystem pounds has hindered the ruse’s effectiveness. His alibis about a new diet routine are losing credibility, especially since his eyes have regained the clarity of youth and his loose skin and muscles have tightened throughout his body. Even his hair is fuller and darker…though I suppose hair transplants and dye could produce similar results.

Alistair will be sixty-two years old in July, less than a month from now, and yet, he bears all the characteristics of a man approaching fifty. Not to mention, the age reversal appears to be picking up steam—enough to where he has taken a one-year hiatus from his professorship at Georgetown to escape growing scrutiny.

Despite hoping for a possible return to his professorship, I believe his teaching days at the esteemed institution have ended forever. Such is the curse of eternal youth that he and our friends Jeremy and Amy Golden Eagle must now endure. Perhaps Beatrice will also enjoy this ‘curse’ someday, although her youth restoration is progressing much slower.

“Would you rather have the honor?” I reduced my voice to a mere whisper as Nancy sauntered away. “It could be a bomb, you know.”

“Humph! If that’s true, I guess you’ll read about it someday in whatever new place and time you end up in.” His turn to tease.

“Fair enough,” I agreed. “I’ll hold it close, and if it goes ka-boom, it’ll only be me who gets blown up. You can explain why your kid’s no longer on the plane.”

Buy a Cowboy by Cleo Kelly
Enemy Camp by Hill, David
The Story of Astronomy by Peter Aughton
Down a Lost Road by J. Leigh Bralick
I Think of You: Stories by Ahdaf Soueif
Banged In The Bayou: Monsterotica Book 1 by Madison Sevier
Return of the Homework Machine by Dan Gutman
Tides of Blood and Steel by Christian Warren Freed
Dancing in the Dark by Mary Jane Clark
Buccaneer by Tim Severin
Our partner