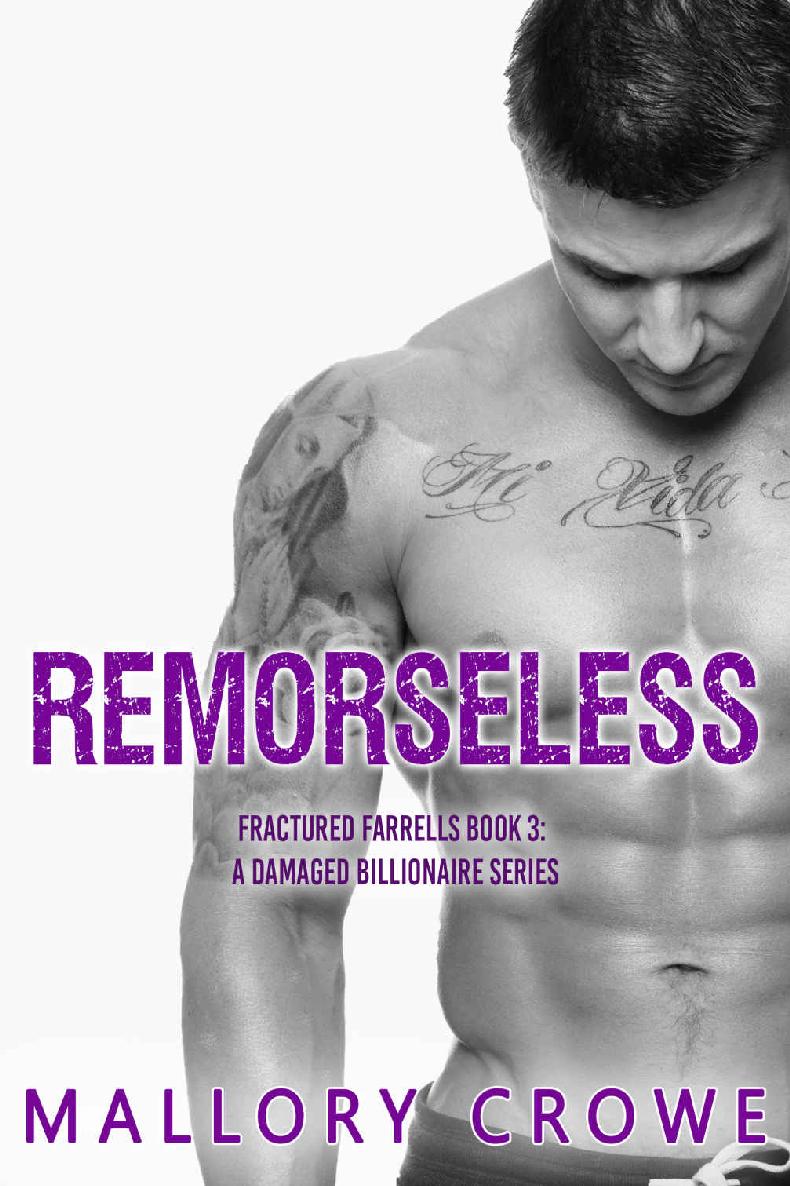 All rights reserved. This book or any portion thereof may not be reproduced or used in any manner whatsoever without the express written permission of the publisher except for the use of brief quotations in a book review. Fonts used with permission from Microsoft.

Want to get more FREE from Mallory?

Sign up for the author’s New Releases mailing list and get a free copy of Part One through Three of the Cross Falls Saga AND a free bonus scene showing April and Sam’s first meeting years before the events in Teaching The Boss!

Check out all of Mallory Crowe's Books!

J
ulie had done a lot of crazy things in her life, but this might take the cake. She rolled down the window and looked at her phone for the fifteenth time. It was ten past ten. Which meant he was ten minutes late. But when she’d talked to the warden the night before to confirm the time of the final hearing, he’d said nine thirty. This final hearing was more of a formality, so Julie didn’t know how long she should expect it to take.

She was about to reach back for her book when the steel gates of the prison started to slide open. No one was waiting to enter the first of many locked doors of the prison, so it had to be someone trying to get out. Julie slid forward in her seat as she tried to get a better view of whoever was coming out. She’d seen plenty of pictures of the guy, but they were all of him ten years ago.

Who knew what was about to walk out of those doors?

Even though Julie was half convinced she wouldn’t recognize Logan Farrell when she saw him, the guy who walked out was unmistakably a Farrell.

It helped that he wore the outfit she’d sent. He’d been originally taken in while at work. He’d been a young twenty-two years old, and Julie knew exactly what he’d been wearing because she’d seen the pictures. Because getting arrested for something you didn’t do wasn’t bad enough, it had to happen in full view of the paparazzi. The media had always been fascinated with the Farrell family, especially with Walter Farrell’s very public string of marriages and divorces, but this arrest started their obsession.

Julie supposed she should be grateful. If it weren’t for the issues with the media and their fixation with the brothers, Nathan in particular, she wouldn’t have her extremely comfortable savings account. Most PR specialists only dreamed about getting clients this big. But it was hard to be grateful considering the amount of headaches the Farrells had caused her. Hell, at this point she should own stock in antacids. Lord knew she was probably increasing the profits tenfold.

With that in mind, she popped a few more of the chewable tablets and got out of the car. She’d parked the brand-new rental SUV in the middle of the parking lot. Julie didn’t know much about Logan Farrell, but she knew she needed to tread carefully. This was a man who’d been born into privilege and had been screwed over time and time again. He had ten years to think about just how unfair life was, and she didn’t know what kind of bitterness would come out of that.

And she had a feeling he wouldn’t be the type to be overwhelmed with gratefulness that his family had fought tooth and nail to get the charges of insider trading dropped. And that was why she was there. To monitor him and make sure he didn’t do anything stupid.

Logan looked strongly like his brothers and extremely different at the same time. His dark, almost black, hair was long and ragged, pulled back into a short ponytail.
Funny.
Julie had never liked long hair on a guy, but when it was pulled back, it made his sharp cheekbones and strong jawline stand out even more.

She couldn’t see his eyes from where she was, but she knew from pictures that they were a bright ice blue. Hopefully that was one thing prison couldn’t change. When Julie had first seen pictures of him, she’d had to ask Nathan whether he was wearing contacts. The color just seemed so unreal. She had a feeling that if he hadn’t been put in prison, he’d be the party boy who would’ve needed a personal PR rep, not Nathan.

Except now he was free and still too damned attractive for his own good. He was going to be looking to scratch a hell of a lot of itches. It was her job to keep those impulses managed.

The guy stopped outside the gates and looked around. She couldn’t guess what he planned to do. He’d ignored all the calls from Robert and Alex where they’d tried to arrange a pickup for him. Hopefully he’d be willing to talk to her.

She’d had no idea what size clothes he wore, so she’d played it safe by sending Logan some XL sweatpants and a white T-shirt. They’d be comfortable and hold him over while they looked for some better fitting clothes.

He hadn’t been expecting her, so she didn’t think she’d get his attention until she was right up on him, but Logan stared at her the second she stepped out of the car. As she weaved through the parking lot, he never looked away from her. She wasn’t sure whether he’d forgotten all basic manners while he was in there or whether he just didn’t care.

Maybe a combination of both.

Julie squared her shoulders as she approached her newest project. “Mr. Farrell?” she asked, even though she already knew it was him.

His eyes, which she confirmed were the same striking blue color once she was so close, narrowed skeptically. “Who the fuck are you?”

Oh yeah. He was going to be a peach to work with.
“Your family sent me to help with your release.”

Those eyes looked up and down her body; she forced herself to remain still and not fidget. Her designer jeans and black tank top with delicately embroidered blue flowers was perfectly modest, and she had no reason to feel ashamed with what he was seeing.

“You don’t dress like a hooker or a lawyer. Why would my brothers send you?”

“I’ll take that as a compliment. They sent me to help. You tell me what you need and I’ll get it for you. Starting with a car.” She held up the keys to the rental. “This is just temporary, but we can go car shopping as soon as you’re ready and pick out a permanent ride for you.”

Logan tentatively reached out and took the keys. “You think I still know how to drive?”

“I think I got a car with good airbags.” He gripped the keys tightly in his hand, and Julie didn’t know whether that was a good sign or bad. “Since I’m more familiar with the area, I can handle the first leg of the trip. I did some reading, and it said that most people who get out after long stints in prison like to get food first. Usually some sort of meat. I have a list of the best burger joints in the area. Maybe that can be lunch and we can move on to steak for dinner?”

Logan was expressionless as he stared at her. Julie knew that no matter what he’d been expecting, it sure as hell wasn’t her. Besides, it was hard to give a smartass answer when someone offered to get you a burger.

He handed the key back to her. “Lead the way.”

Julie smiled at her victory as she took the key from him. “Great. Come on.” She led the way across the parking lot and to the car. She didn’t hear him following her, but she forced herself to keep her gaze straight ahead. It was important to pay attention to the power scales here. On one hand, he’d just gotten out of a place where he’d been vulnerable for ten years straight. She knew he’d be trying to prove himself and test limits now that he was out, which she was fine with. But he also needed to know that he couldn’t push her around or force her to let him do whatever he wanted. She was there to protect him, and in some cases that would mean not letting him get what he wanted.

So this was going to be an interesting day.

Once she reached the car, she finally let herself look over her shoulder, and sure enough, Logan was right there.
Had he been that close to her the entire time? Who knew he could walk that silently?

Except he stopped when she stopped, mere inches away from her and right next to the driver’s side door. “Did you change your mind about driving?” she asked.

Logan bent forward, and she held her breath.
Was he going to kiss her?
She knew that he’d be looking for a woman soon, but he needed to know that she was off-limits. It would help if she could
tell
him that she was off-limits, but for some stupid reason, her mouth didn’t seem capable of speech at the moment.

Guildhall Guardian: Thamesian #1 (Thamesians) by Ladsow, Aidan
The Sand Panthers by Leo Kessler
Shadowstorm (The Shadow World Book 6) by Dianne Sylvan
Lover Eternal: A Novel of the Black Dagger Brotherhood by J. R. Ward
Vixen in Velvet by Loretta Chase
Under the Lights by Dahlia Adler
Resisting Pressure (Rhinestone Cowgirls Book 5) by Carver, Rhonda Lee
Speed Trap by Patricia Davids
TRAVELING AROUND THE WORLD: Our Tales of Delights and Disasters by Shelley Row
The Finale by Treasure Hernandez
Our partner