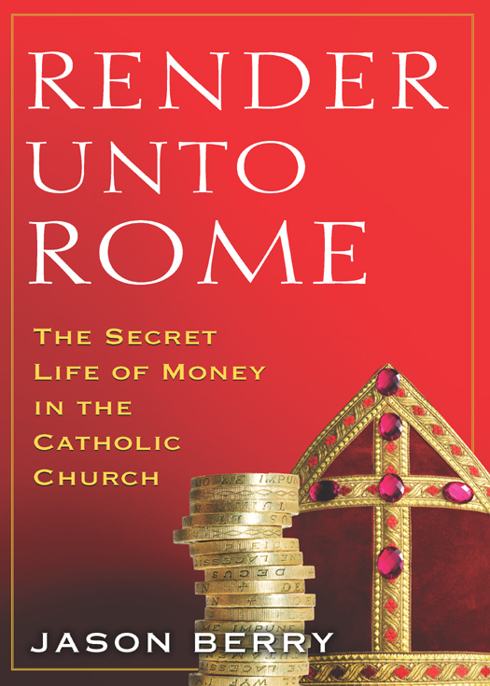 NONFICTION
Up from the Cradle of Jazz:
New Orleans Music Since World War II
(with Jonathan Foose and Tad Jones)

Vows of Silence: The Abuse of Power in the Papacy of
John Paul II
(with Gerald Renner)

Louisiana Faces: Images of a Renaissance
(with photographs by Philip Gould)

The Spirit of Black Hawk: A Mystery of Africans and Indians

Lead Us Not into Temptation: Catholic Priests and the
Sexual Abuse of Children

—Cardinal Alfredo Ottaviani, Prefect of the Holy Office, to Mario von Galli in
The Council and the Future
(1966)

Cover
Other Books by This Author
Title Page
Copyright
Dedication
Epigraph
PROLOGUE
: PRINCES OF THE REALM

1:
BOSTON IN THE FAULT LINES

2:
ORIGINS OF THE VATICAN FINANCIAL SYSTEM

4:
THE VATICAN, THE VIGILS, AND THE REAL ESTATE

6:
THE CASE OF THE MISSING MILLIONS

11:
THE DEBTS OF APOSTOLIC SUCCESSION

13:
AMERICA AND THE VATICAN

PRINCES
OF THE
REALM

The church stood at the bottom of Bunker Hill in Charlestown, one of the city’s oldest neighborhoods. Like much of Greater Boston, Charlestown was no longer hard-shell Irish. The wooden triple-deckers that housed large working families in decades past had become pearls for gentrification in 2004, despite the outlying streets that bore the scars of a drug economy.

The social mosaic at St. Catherine of Siena parish delighted Rose Mary Piper. She was in the winter of life, with four children grown and grandchildren nearing adulthood. The range of people in the pews, so different from that of the predominantly white parishes she had known, touched her identity as one soul united with a greater body of believers. From the housing projects along Mystic River came Puerto Ricans and people from the Dominican Republic to Sunday Mass, with their Spanish songs and bilingual bulletins, worshipping alongside people with Irish roots and then more cosmopolitan Bostonians like her son-in-law, Peter Borré, who lived in a nearby condo.

Rosie Piper knew the Latino women had it tough, like her ancestors who got off the ships from Ireland and made it in Staten Island, New York. To live is to change. When her husband was diagnosed with dementia, Rosie oversaw the selling of their home in Hilton Head, South Carolina.
For most of their long marriage, Bill Piper’s career as a chemical engineer with DuPont had anchored them in Delaware. Rosie had enjoyed their time in the South. But with the realization that she alone could not manage his needs, she decided on the Boston area, where their two daughters had settled. Mary Beth, the rebellious one, no longer went to church; but her husband, Peter, attended Mass with Rosie.

Every Sunday, Rose Mary Piper put a $10 check in the collection basket, a practice ingrained with time. Peter gave cash. The worldview Peter Borré carried from his navy years turned on just authority. You went to church, prayed for those you loved, asked forgiveness for your sins, and donated money because it was the right thing to do. Until the scandal rocked Boston neither of them thought much about church finances, how a given dollar broke down—what percentage went to parish costs, what part for the parochial school and to help the poor; how much to the bishop, how much to Rome. You gave money and let the priest and bishop handle it. The Catholic Church was holy, true, apostolic, and wealthy enough to help many of those truly in need.

The revolution in Peter Borrés’s life began in 2004, when the Boston archdiocese imposed a sweeping closure plan on parish churches some months after a legal settlement with 552 clergy abuse victims.
Cardinal Law covered up for child molesters
, brooded Rosie Piper,
and now they sell churches!
Peter Borré, who led a comfortable life, was also offended, but he soon acquired a cold curiosity about the money. As Borré would learn, many American Catholics were riled about just stewardship: how bishops manage the finances. Huge legal settlements caused by bishops who recycled pedophiles, churches closed against the people’s will, continuing reports of priests or lay staffers who stole parish funds—all fed a deep sense of betrayal. In 2010 an upsurge of clergy abuse cases showed bad decisions by Cardinal Joseph Ratzinger long before he became pope. As Benedict XVI met with victims and apologized, he nevertheless seemed detached, in a surreal way, from the obvious need for structural reform.

Since the harrowing struggle of Benedict XV during World War I, the role of the pope has enlarged, dramatically, from that of a supreme religious leader to that of an international advocate for peace. Following the Great War, a succession of popes emerged as moral statesmen on the global stage, slowly distancing themselves from a history of anti-Semitic views within the church and calling for dialogue and diplomacy over armed conflict,
particularly in the nuclear age. The evolution of the papacy as a force for peace took a major step in 1958, when John XXIII, who as papal nuncio in Istanbul during the war had helped save Jews, abolished the phrase “treacherous Jews” from the Good Friday liturgy. He greeted a delegation of American Jews with an echo of the Old Testament account of Joseph in Egypt: “I am Joseph, your brother.”
1

His successor, Paul VI, made a point of often saying, “If you want peace, work for justice.”
2
Even Pius XII—the focus of an ongoing debate among historians and Jewish leaders about his reticence during World War II toward condemning Hitler and the Nazis—was revered in postwar years as a voice of peace. Pius’s questioned legacy results not just from revisionist historians. Ironically, John Paul II raised the expectations for a church more honest about itself in his call for “the purification of the memory.”
3
A champion of human rights in the political sphere, John Paul in his many apologies for past church sins cited “sufferings inflicted upon Jews,”
4
though he mentioned no pope by name.

In his last dozen years, John Paul damaged his own legacy on human rights by failing to appropriately acknowledge the victims of clergy child abusers and to act forcefully on the clear signs of a criminal sexual underground in clerical culture. Benedict XVI inherited a Vatican tribunal system averse to punishing bishops who were sex offenders or complicit in concealing them. By failing to show resolve as a ruler and bring the worst bishops to justice, Benedict has invited scrutiny of the Vatican’s legal system, such as it is. Vatican offices have largely rubber-stamped bishops’ financial decisions. How that Vatican legal system functions is the central theme of this book.

Render unto Rome
follows a series of property and financial decisions that link certain American bishops and Vatican officials; the book further examines how Father Marcial Maciel, the greatest fund-raiser of the modern church, became its greatest criminal. In following these narrative lines I have taken a deep look at the handling of church assets in Boston, Cleveland, and Los Angeles, interlaced with events from other dioceses and a recurrent focus on the Congregation for the Clergy, the Vatican office that monitors how bishops sell property. A key official in Clergy recently assisted a profiteering scheme on the sale of U.S. churches. A central figure in that scheme, Cardinal Angelo Sodano, was Vatican secretary of state for fourteen years under John Paul and slightly more than a year
under Benedict. Sodano was also a tireless supporter of Father Maciel. The cardinal refused to be interviewed; however, FBI findings on the business dealings of his nephew were of great help, along with other sources, as I put a viewfinder on Sodano and his machinations.
Nipote
, in Italian, is the root word for “nepotism.”

I have drawn a timely insight from
Worldly Goods
, James Gollin’s 1971 book on Catholic Church finances. Gollin reported that the American church held between 50 and 60 percent of global church assets, but much of it lay in property that could not be sold. “Adding up the total wealth of the church is a game,” he observed. “The essential thing is to understand how the wealth is managed.”
5
As I have learned, that management varies greatly from one bishop to the next.

Perfectly Honest by O'Connor, Linda
Whispers of the Dead by Simon Beckett
No Mercy by Shannon Dermott
A Christmas Guest by Anne Perry
My Soul Keeper by Ker Dukey
The Alaskan Adventure by Franklin W. Dixon
Double Jeopardy by Bobby Hutchinson
Wings of Morning by Kathleen Morgan
Jasper John Dooley, Star of the Week by Caroline Adderson, Ben Clanton
The Voyage of the Dawn Treader by C. S. Lewis
Our partner