Reno Gabrini: A Man in Full 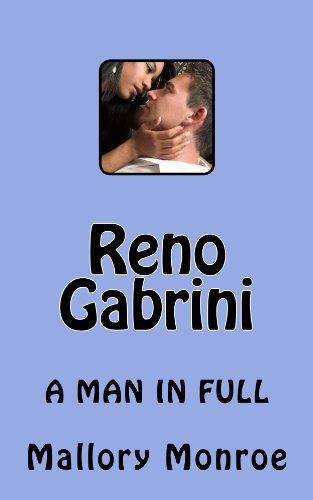 A MAN IN FULL

All rights reserved.  Any use of the materials contained in this book without the expressed written consent of the author and/or her affiliates, including scanning, uploading and downloading at file sharing and other sites, and distribution of this book by way of the Internet or any other means, is illegal and strictly prohibited.

This novel is a work of fiction.  All characters are fictitious.  Any similarities to anyone living or dead are completely accidental.  The specific mention of known places or venues are not meant to be exact replicas of those places, but are purposely embellished or imagined for the story’s sake.

for more information on all titles.

HIS WOMEN AND HIS WIFE

A SCANDAL IS BORN

THE POWER OF LOVE

THE SINS OF THE FATHERS

WHAT HE DID FOR LOVE

THE HEART OF THE MATTER

THE HEART OF RENO GABRINI

A PLACE IN HIS HEART

IF YOU WANTED THE MOON

AFTER WHAT YOU DID

for updates and more information.

They left the club after midnight.  The music had been good, and the girls had been tolerable, but none of the girls wanted to go to that next level.  Jimmy Mack Gabrini was only mildly disappointed, but his friend Constantine, called Connie by most, was downright annoyed.

“Bunch of fucking gold diggers,” he said as they walked across the street and made their way further around toward Jimmy’s car.

“Gold diggers?” Jimmy asked with a smile.  “What gold you’ve got to dig?”

“You know what I’m saying.  Those girls looking for some sucker to take care of them.  That’s all they’re about.  Nobody’s got time for that.”

“You’re angry because that girl wouldn’t give you the time of day.”

“It was her loss,” Connie bragged.  “Stuck up bitch!  Who did she think she was?  She better be glad she wasn’t in Brooklyn.  I would have sailed her ass through that glass if she had been on my turf.”

Jimmy laughed and shook his head.  Connie was all talk, he thought.  One of those straight-out-of-Brooklyn Italians his father would say was all talk and no action.  But Jimmy liked Con. Mainly because he was fun to be around, but also because he never tried to capitalize on the fact that Jimmy’s father owned the PaLargio Hotel and Casino on the Vegas Strip.  All of Jimmy’s other friends constantly begged him for a hook up, as if he could rig a slot machine or bribe a blackjack dealer, or even get them a job with a snap of his finger.  But Con was different.  He never asked for any favors and Jimmy never offered any.  Perfect friendship, Jimmy thought.

“Just admit it,” Jimmy said.  “Every girl you tried to talk to tonight ended up giving you the cold shoulder.  Every one of them.”

“They gave you the cold shoulder too,” Connie said.  “It wasn’t just me.  They weren’t interested in your ass either.  And you’re better looking than I am!”

“But they didn’t give you the time of day either,” Connie continued.  “Except that one girl.”

“You know.  That tall one in the leather suit.”

“Cool?” Connie asked with surprise in his voice.  “She looked like a freaking water buffalo, and you call that cool?  Big head, sloppy ass, dropped tits.  But you kept talking to her like she was pretty.  Like she was something special.  You even bought her a drink!”

“She was the best looking girl in the club and you know it.  And smart too.  But you’d never know that, would you?  You’d be too busy dismissing her just because she was overweight.”

“I like my women small, what can I say?”

Connie smiled, and then he laughed.

“Breathe too hard and you’re a dead motherfucker!” the gunman roared.  He had come up behind them, and neither one of them had seen him coming.

Jimmy, who knew what tough guys were capable of just from being around his own tough-guy father, froze.

“I want your wallet and your keys,” the gunman demanded, and Jimmy immediately complied.  The gunman then aimed his weapon at Connie, who was backing away.

“Don’t try me asshole!” he yelled.  “Lift those hands where I can see them!”

Connie quickly lifted his hands and began looking around.  They were parked on a side street because there was no parking spaces left in front of the club, and the street had only a couple Ma and Pop stores that had long since closed.  Although people were hanging outside of the club, including a couple bouncers, nobody was on the side street.  The gunman had free reign, and Connie and Jimmy knew it.

That was why Jimmy didn’t hesitate giving up his wallet and keys.  But as soon as he did, the gunman pushed him in the back with his shoe, knocking him down to the sidewalk.  Jimmy fell down hard, onto his stomach, and stretched out his hands at the gunman’s command.

Then the gunman turned to Connie.  “What you waiting for?” he yelled.  “Give it up motherfucker!”

“Alright,” Connie said, his hands up as if the gunman was a policeman.

“Then get on with it!  What you waiting on?”

Connie reached into his pocket and then pulled out, not his wallet or any keys the way Jimmy had done, but a gun of his own.  And he fired it almost as quickly as he had pulled it out.  The gunman, who was dropping down just as Jimmy was looking up, didn’t stand a chance.

Jimmy jumped up from the ground, stunned, as he looked at the downed gunman.

But Connie wasn’t thinking about the gunman.  It was all about self-preservation now.  “Let’s go!” he yelled, running toward the passenger door of the car.  “Let’s get the fuck outta here!”

“What are you talking?” Jimmy asked with a puzzled look on his face.  “We don’t have to run.  We didn’t do anything wrong.  He was gonna kill us!”

“You think the cops care about that?  They don’t give a shit about that, Jimmy!  They’ll put your black ass in jail in a heartbeat, and my white ass right along with it!  I can’t take that chance!”

“But we didn’t do anything wrong!” Jimmy yelled again.  “You had to shoot him to save us!”

“They won’t believe that.  I’m telling you they won’t!”