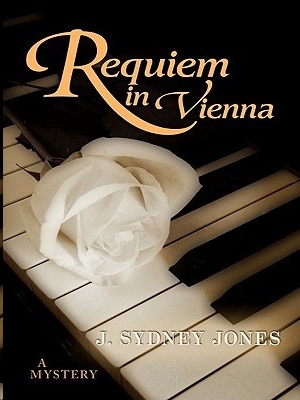 For the sibs, Gwen and Lowell

Once again, thanks go out to the usual suspects. To Alexandra Machinist, for being the kind of supportive yet straight-talking agent every writer hopes for. To Peter Joseph, an editor of sagacity and wit and steadfast co-conspirator in the Viennese Mystery series. To Hector DeJean, publicity manager extraordinaire, whose personal enthusiasm and tireless efforts are greatly appreciated. To Margaret Smith, an editorial assistant who is always on top of things and always there with an answer. A round of thanks also to the art department, copy editors, and production folks for their creative labors on behalf of this book. And, to my wife, Kelly, and son, Evan, who have lived a good deal of time with these characters in our midst and who, like good hosts, have always been polite to them, a final thanks for your patience and love.

O
bservers afterward noted nothing different about the day. Just another typical rehearsal under the new Court Opera Director Gustav Mahler. “The drill sergeant,” the singers called him.

They were preparing for a performance of
Lohengrin
and Mahler was particularly fussy about Wagner. A Jew—though he had converted to Christianity before being offered his new position—Mahler walked on Tiffany eggs whenever preparing for one of the Master of Bayreuth’s works, for Wagner was still the darling of the German nationalist press. Upset one of those critics with a single note out of place, a slight misstep in staging, and Mahler would bear the brunt of their “What can you expect from a Jew” level of criticism.

So, today, hectoring, hectoring. And there would be a good eight hours of it if the Herr Director’s usual routine was followed.

The object of his strident complaints this morning was Fräulein Margarethe Kaspar, a young mezzo from the back of beyond in the Austrian region of the Waldviertel, the most unlikely place for a singer to hail from. A pig farmer was more likely the product of that region; a slightly moon-faced, inbred specimen of the human race. Not a soprano at Vienna’s Court Opera!

Yet here she was, Fräulein Kaspar from Krumau (not even an inhabitant of the so-called city of Zwettl!) in full regalia for her role as one of the four pages in Wagner’s adaptation of the medieval German romance. Her heavily rouged lips were trembling; she was near tears.

“You’re singing like you’re calling in the pigs for slops,” Mahler shouted at her. “Please do not make me regret my decision to sign you.”

It was later reported that at that point the poor girl broke into the tears that had been accumulating, waiting for egress; that her otherwise creamy complexion turned a quite unattractive blotchy, mottled red at the cheeks, and she cupped her rather tiny hands over her face in shame.

“My God, woman,” Mahler thundered on. “Do compose yourself. This a profession, you know. If you haven’t the skin for it, go back to your rustic simplicity and the local boys with their thick hands.”

This last was said with Mahler standing not a hand’s length from the young girl, yet his comments carried to the last row of the balcony.

A sudden hush went over the entire cast; even the cacophonous tuning of the orchestra in the pit and last-minute backstage hammerings were stilled. This was too much, and even Mahler seemed to realize he had overstepped the bounds of propriety.

He drew closer and wrapped a protective arm around the girl—who was rumored to be his mistress, of course. She was of no great size; still, she stood half a head over the diminutive director, who was five feet and four inches in his scuffed leather boots.

“There, there, Grethe.” He patted her shoulder, attempting rather unconvincingly to console the young girl. “I am sorry to shout at you so. But the high C must be hit, not simply approached. Essential, quite essential.”

Then he left her, still sobbing, turning back to the rest of the opera chorus.

“What are you all gaping at? Back to work.” He clapped his hands, an insistent schoolmaster.

At that very instant came a shout from behind the partially curtained stage.

It was too late, however, for the heavy asbestos fire curtain, its hem filled with lead weights, came crashing down. It hurtled onto the unfortunate Fräulein Kaspar, who was still weeping into her cupped hands. The curtain narrowly missed Mahler, who dove out of the way.

The curtain hit the stage with a fearful crashing, after which there was a moment of stunned silence. Only the black patent leather shoes of the fallen soprano were to be seen from under the curtain. Then came shouted voices from the stagehands behind the curtain, one carried above the others: “She’s dead. By God, the little songbird’s dead and gone.”

W
erthen refused to walk to the cemetery. He would show his respect to the dead by his presence at the grave site, but his damaged right knee, the result of a duel, kept him from making the two-mile pilgrimage by foot from the center of Vienna out to the Central Cemetery in Simmering, the recently incorporated Eleventh District, as hundreds of other dignitaries were doing.

A duel! My Lord, how blithely it played through his mind, but how improbable it would have seemed mere months before. As foreign to him as Swahili; as much an aberration to his staid existence as polite parlor conversation would be to a bushman.

A duel of words perhaps, verbal pyrotechnics before an easily amused judge; that had been his métier. But not a duel to the death; not the too-intimate warmth of an opponent’s back against his before beginning the mandatory fifteen paces. Not the cold feel of metal in his hand from a pistol. Not such an eccentricity for Karl Werthen,
advokat
superior of wills and trusts!

But he had done it, and done it well enough to explode his opponent’s cranium like a smashed pumpkin, spilling crimson blood and pinkish gray brains onto the green lawns of the Prater one chilly autumn morning. It had been a life-and-death struggle to
rid himself, his friends, and his beloved wife Berthe of a man who quite simply wanted to kill them all one fine day.

Werthen shook the evil memory of that brutal killing out of his mind, taking up position as closely as he could to the freshly dug grave site in Group 32A, plot number 27, just between the final resting places of Franz Schubert and Johannes Brahms. In operation for only a quarter of century, the Central Cemetery was already filling up. Five hundred acres, and soon the place would be a high-rent district, Werthen mused. Half the size of Zürich, as the Viennese quipped, and twice the fun.

Here at Group 32A were all the notables of musical history: those that had died since the cemetery’s opening in 1875, such as Brahms and Anton Bruckner, and those dead from an earlier epoch—Gluck, Beethoven, Schubert—their remains dug up and reinterred here in the 1880s. Missing, of course, were Papa Haydn, buried in Eisenstadt, and Mozart, and who knew where that poor wretch’s bones were.

No final resting place for Werthen in this group. No, his bones would molder in the Jewish plot near Gate 1.

Werthen had been dutifully at his office in the Habsburgergasse this morning when the crowds of mourners thronging the nearby Episcopalian Church had reminded him that this was the great one’s funeral. What the hell, he had thought. An outing. A show of respect for a true master. He told his assistant, Doktor Wilfried Ungar, that he would be back after lunch, and left before the priggish young man could make a comment. Ungar was the sort to flaunt his double degree in law and economics; even his intimates called him Doktor Doktor Ungar. Werthen could not complain, however. The junior lawyer had kept his firm going for the last few months with Werthen’s extended healing from his dueling injury and his subsequent reconsideration of what he wanted to do with his life. Lying in his recovery bed, he had felt like an adolescent again, facing the great questions of career and the meaning of life. A bullet in the flesh focuses one’s mind wonderfully on what is
most important in life. Actually, there had not been a lot of soul-searching involved: he’d begun his career in criminal law before turning to the more benign field of wills and trusts; he knew now he must return to his first calling in one form or another.

The crowds of mourners were only now reaching the cemetery after their long walk. Their route had been marked by gas streetlamps burning at midday. Businesses and schools had closed in order that the populace might pay their last respects as the funeral cortege passed by, the hearse drawn by four gray Lippizaners and accompanied by eight carriages full of flowers through the crowd-choked streets of Vienna.

It was unseasonably warm for early June. Werthen’s black serge suit soaked in the sun’s rays like a sponge. Sweat formed at his tight starched collar. He could imagine how uncomfortable those pilgrims were who had made the journey on foot; bad enough for him after a pleasant
fiaker
ride. Every able-bodied official, artist, musician, intellectual, and even a critic or two, had trudged along behind the coaches.

The sight of the funeral cortege approaching down the long lanes of the Central Cemetery reminded him of another funeral just last September; that of the Empress Elisabeth, so cruelly assassinated in Geneva. He felt a twinge in his knee at the thought, for her death and the wound were inextricably linked.

The Makeshift Marriage by Sandra Heath
The Return by Campbell, Sean M.
The Baller's Baby by Cristina Grenier
Better Than Running at Night by Hillary Frank
Night Terrors by Mark Lukens
A Bid for Love by Rachel Ann Nunes
Through Time-Slamming by Conn, Claudy
Journey's End by Josephine Cox
Forbidden Paths by Belden, P. J.
Home: A Stranded Novel by Shaver, Theresa
Our partner